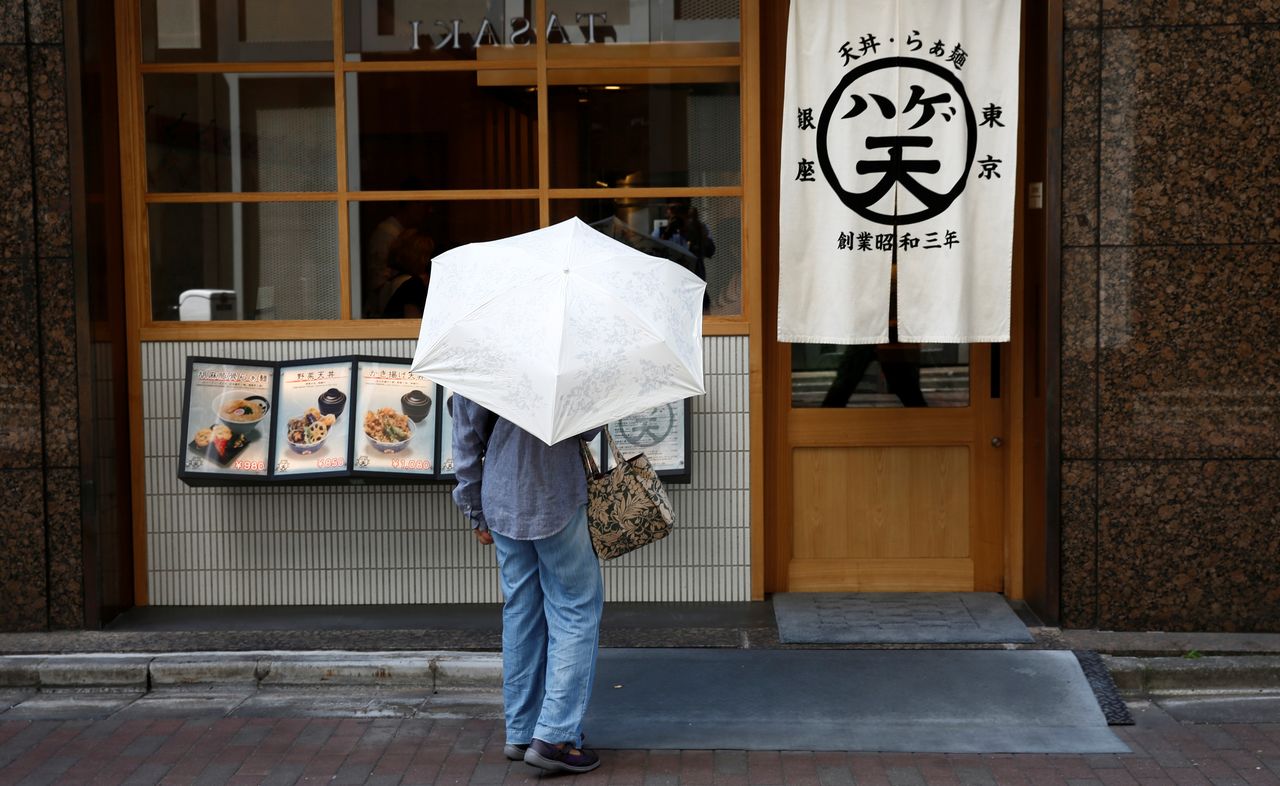 FILE PHOTO: A woman holding a parasol looks at a menu board in front of a restaurant at a shopping district in Tokyo, Japan, July 20, 2018. REUTERS/Kim Kyung-Hoon

TOKYO (Reuters) -Japan's core consumer prices narrowed their annual pace of falls for three straight months in July, a sign global commodities inflation was offsetting some of the deflationary pressure from a pandemic-induced spending slump.

But analysts expect consumer inflation to stay well below levels seen in the United States and Europe, as Japan's decision on Tuesday to extend state of emergency curbs into mid-September is seen dealing a blow to already weak household spending.

"Cost-push inflation is driving up goods prices, while service prices remain weak due to the pandemic's impact," said Toru Suehiro, an economist at Daiwa Securities.

"Given the increase in Delta variant cases, this trend will continue for the time being."

The fall was due in part to a change in the base year for the CPI that gives a heavier weighting to mobile charge fees, which plunged a record 39.6% in July.

But the drop was smaller than market forecasts for a 0.4% fall and a 0.5% decrease in June due to the boost from rising food and fuel costs, including a 19.6% spike in gasoline bills.

Prices of refrigerators and air conditioners, as well as accommodation fees, also rose in a sign some households were keen to spend after hunkering down during repeated stop-and-go state of emergency curbs.

But the pent-up demand is still too weak for companies to pass on rising costs to households as aggressively as their counterparts in western economies, analysts say.

The drop in Japan's consumer prices contrasts sharply with moves in wholesale prices, which spiked 5.6% in July to mark the fastest annual increase in 13 years.

The so-called core-core consumer price index, which strips away not just fresh food but energy costs, fell 0.6% in July from a year earlier.

The data may lead to a cut in the Bank of Japan's inflation forecast at its next quarterly review due in October, as its current projections do not take into account of the base-year effect, some analysts say.

In present projections made in July, the BOJ expects core consumer prices to rise 0.6% in the year ending in March 2022.

"The BOJ's current outlook is based on the scenario that economic activity will start to normalise toward the end of this year," said Takeshi Minami, chief economist at Norinchukin Research Institute.

"But the timing of the recovery may be delayed."

Japan's economy rebounded more than expected in the second quarter after slumping in the first three months of this year, a sign consumption and capital expenditure were recovering from the coronavirus pandemic's initial hit.

But many analysts expect growth to remain modest in the current quarter as curbs reimposed to combat a spike in infections weigh on household spending.