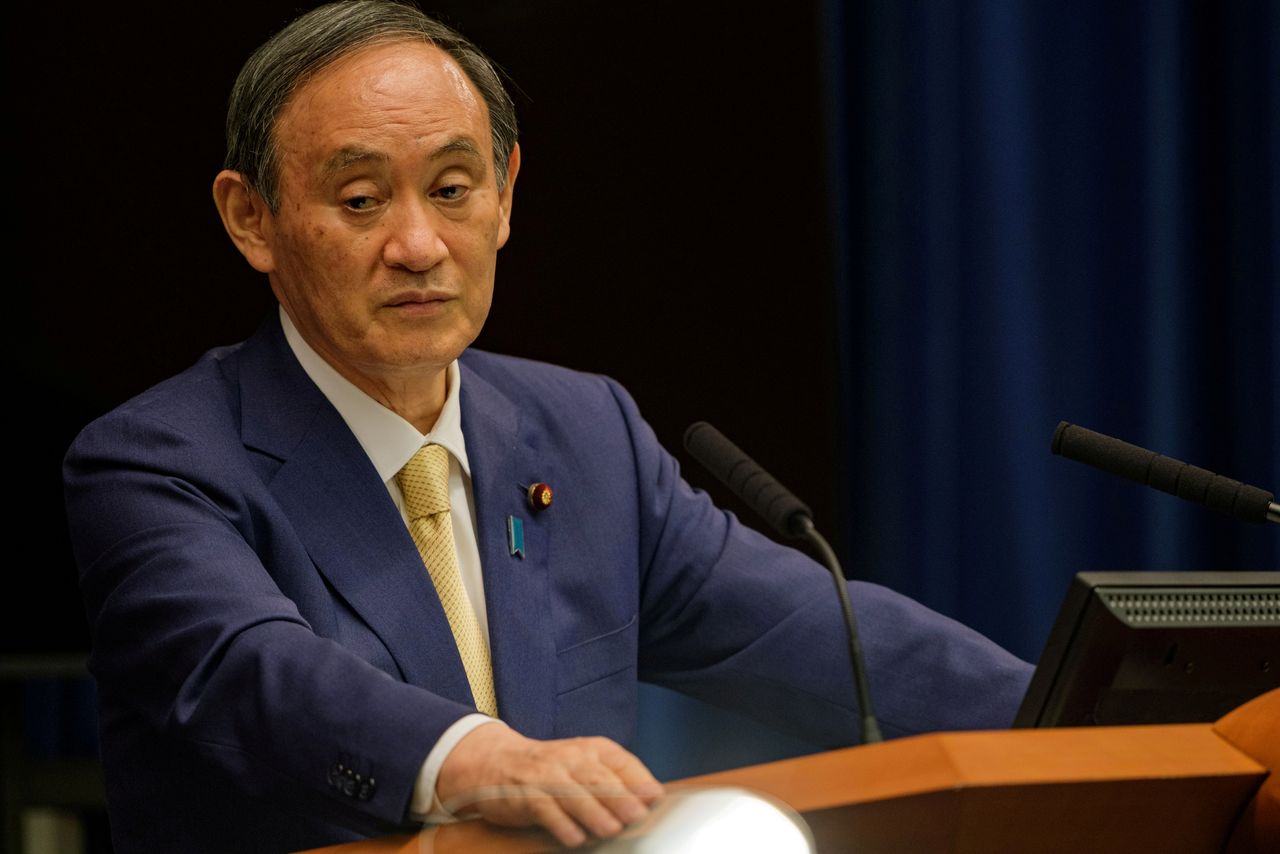 By Linda Sieg and Yoshifumi Takemoto

TOKYO (Reuters) - Unpopular Japanese Prime Minister Yoshihide Suga looks increasingly vulnerable to a challenge from within his party for the nation's top job after an ally's defeat in a local election on Sunday seen as a referendum on Suga's COVID-19 response.

If Suga loses, he would join a long list of short-term premiers. He took over in September after Shinzo Abe quit, citing ill health and ending a rare lengthy term of nearly eight years.

Suga, whose term as ruling Liberal Democratic Party leader ends next month, has seen his support slide from highs of about 70% to below 30%, with a weekend poll by ANN News putting support at 25.8% as Japan battles an explosive surge of COVID-19 infections.

On Monday, domestic media reported that former Foreign Minister Fumio Kishida is likely to run in the LDP's leadership race.

The defeat of Hachiro Okonogi, son of Suga's political mentor and a former cabinet minister, in Sunday's election for Yokohama city mayor, will most likely amplify calls to replace Suga ahead of a lower house election that must be held by November.

"The LDP is being severely criticised in my constituency, so it's very hard to fight under Suga," said a junior LDP lawmaker from a conservative rural district, who declined to be named because of the sensitivity of the situation.

Such views are expected to spread.

"For certain, voices saying they can't fight the general election under Suga will grow louder," said political analyst Atsuo Ito. "The chances of multiple candidates (in the LDP race) will increase."

Still, uncertainty remains. Suga told reporters on Monday there was no change in his plan to run in the LDP poll. No party bosses who backed Suga last year have publicly withdrawn support.

"We should not change the ship's captain in the midst of a storm," one senior LDP lawmaker said ahead of the mayoral vote.

Scenarios include Suga losing the LDP race to a rival, bowing out early, or winning the party vote and keeping his job if LDP losses in the lower house poll are limited.

Lower house members' four-year terms end on Oct. 21. An election for the chamber must be held by Nov. 28 but is expected sooner.

Suga's had hoped to contain the virus outbreak and call a general election after a successful Olympics. That scenario was upended after a COVID-19 surge led to a fourth state of emergency in Tokyo.

Alongside Kishida, former internal affairs minister Sanae Takaichi, an Abe disciple, has said she wants to run, as has Seiko Noda, another female ex-cabinet minister. Both are seen as long-shots, as is former education minister Hakubun Shimomura.

Kishida, once seen as Abe's heir, ranks rock bottom. Abe himself has single-digit support. Prime ministers have sometimes survived poor ratings but Suga is at particular risk because his term as party president is ending just as a general election looms.

Decisions by party bosses, including Abe, his ally Finance Minister Taro Aso, and their rival, LDP Secretary-General Toshihiro Nikai, matter greatly. But younger lawmakers may be more worried about losing their seats than toeing the party line.

Those MPs "are very uneasy about their own elections. It's unclear whether they would vote for Suga even if their faction bosses told them to do so," analyst Ito said.