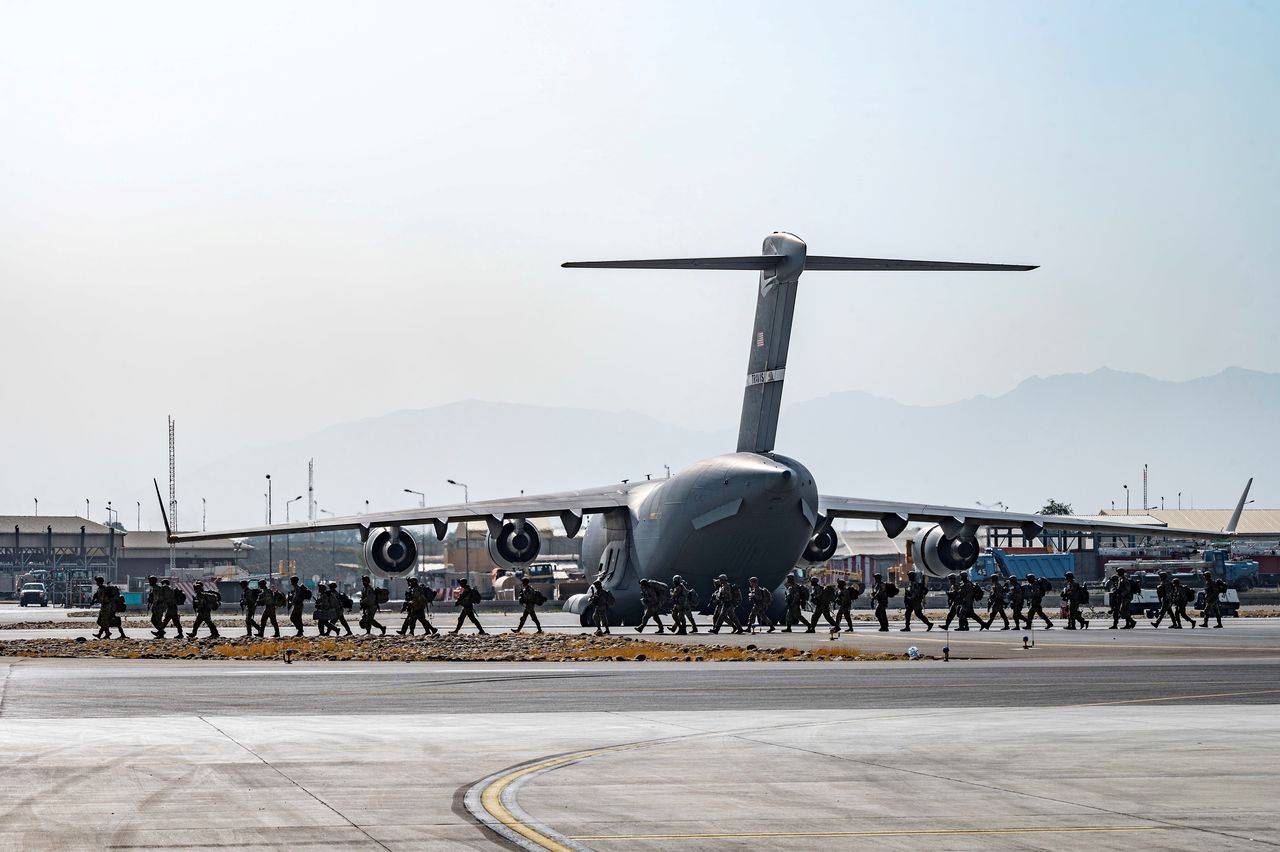 LONDON (Reuters) - U.S. President Joe Biden will face pressure to extend an Aug. 31 deadline to evacuate thousands seeking to flee the Taliban in Afghanistan when he meets Group of Seven (G7) leaders at a virtual meeting on Tuesday.

Western nations are struggling to bring home their own citizens and desperate Afghans massing at Kabul airport who are seeking to flee the country fearing reprisals after Taliban militants seized control just over a week ago.

It has led to chaotic scenes at the airport, with some 20 people killed in stampedes and shootings, amid a panic to catch flights out of the country before the United States and its allies pull out their troops.

The manner of the withdrawal, 20 years after the U.S.-led invasion to oust the Taliban following the Sept. 11, 2001, attacks, has strained tensions between Washington and other Western capitals, where there has been dismay at its timing and how it has been carried out.

At their meeting, the leaders from the G7 group of the richest nations that includes the United States, Italy, France, Germany, Japan and Canada, will focus on the evacuation effort as well as the longer-term future for Afghanistan, said British Prime Minister Boris Johnson, who will chair the conference.

"Our first priority is to complete the evacuation of our citizens and those Afghans who have assisted our efforts over the last 20 years – but as we look ahead to the next phase, it’s vital we come together as an international community and agree a joint approach for the longer term," he said in a statement.

"That’s why I’ve called an emergency meeting of the G7 - to coordinate our response to the immediate crisis, to reaffirm our commitment to the Afghan people, and to ask our international partners to match the UK’s commitments to support those in need."

The leaders are expected to reaffirm a vow to safeguard gains made in Afghanistan over the past 20 years, particularly around girls' education and women's rights, Johnson's office said.

The meeting will also discuss possible economic sanctions and whether to withhold aid if the Taliban committed human rights abuses or allowed their territory to be used as a haven for militants, British sources said on Sunday.

There will also be a call for unity over when and whether to officially recognise the Taliban as the leaders of the country, diplomatic sources said.

But it is the evacuation effort that is likely to dominate discussions. The Taliban have said the Aug. 31 deadline is a red line, but Biden has said troops might stay beyond that date.

Johnson spoke to Biden ahead of the G7 meeting, when they agreed to ensure that all those eligible to leave Kabul were able to do so "including after the initial phase of the evacuation has ended".

The president's handling of the crisis so far has angered some of the United States' closest allies.

During an emergency session in parliament last week, British lawmakers, including many senior figures from Johnson's own Conservative Party, lined up to condemn Biden's actions, while former Prime Minister Tony Blair described the politics behind the withdrawal as "imbecilic".

France has said more time was needed for the evacuation and German Foreign Minister Heiko Maas said on Monday the G7 needed to consider whether it should remain beyond the deadline set by the United States.

British Defence Minister Ben Wallace said there was little prospect of British forces staying on to continue an evacuation once U.S. forces had left.

"The prime minister is obviously at G7 going to try and raise the prospect of seeing if the United States will extend," he said. "It's really important for people to understand, the United States have over 6,000 people in Kabul airport and when they withdraw, that will take away the framework that has allowed us to withdraw, and we will have to go as well."