(Reuters) - U.S. President Joe Biden said on Tuesday the United States is on pace to finish evacuations from Afghanistan by Aug. 31, but left open the chance of the deadline being extended, saying reaching that goal is dependent on continued cooperation from the country's new Taliban rulers.

The Taliban said earlier on Tuesday that all foreign evacuations from the country must be completed by Aug. 31,

In remarks at the White House, Biden said the United States was racing to meet that deadline as concerns mount over the threat of militant attacks.

"The sooner we can finish, the better," Biden said. "Each day of operations brings added risk to our troops."

Continued coordination with the Taliban remains crucial to meeting the deadline, he said, but he called it a "tenuous situation" with a "serious risk of breaking down as time goes on."

Biden said he asked the Pentagon and the State Department to develop contingency plans to push past the deadline should that prove necessary.

The Democratic president, whose administration has been under fire for its handling of the pullout, said U.S. forces had now helped evacuate 70,700 people since Aug. 14.

Biden said his administration was working to rebuild a system for processing refugees that he said was "purposely destroyed" by his Republican predecessor, Donald Trump.

"We must all work together to resettle thousands of Afghans who ultimately qualify for refugee status. The United States will do our part," he said.

Two U.S. officials, speaking on condition of anonymity, said there was growing concern about suicide bombings by Islamic State at the airport, which has been overwhelmed by Afghans and foreign citizens rushing to leave, fearing Taliban reprisals.

One U.S. official said it was no longer a question of if, but when, militants would attack and the priority was to get out before it happened.

The hardline Islamist Taliban told the thousands of Afghans crowding into the airport in the hope of boarding flights that they had nothing to fear and should go home.

"We guarantee their security," Taliban spokesman Zabihullah Mujahid told a news conference in the capital, which Taliban fighters seized on Aug. 15 from the Western-backed government after most foreign forces withdrew following two decades of war.

The Pentagon said several hundred U.S. troops had departed Kabul under a previously scheduled move but that it would not affect evacuation efforts.

Mujahid said the Taliban had not agreed to an extension of the Aug. 31 deadline and called on the United States not to encourage Afghan people to leave their homeland. He also urged foreign embassies not to close or stop work.

The White House said, however, that it expects some Afghans who qualify for special visas will not be barred from going to Kabul airport to evacuate in coming days.

Some Democrats in the U.S. Congress argued the evacuations must be completed regardless of the target date.

"To me, the mission of evacuating personnel takes priority over deadlines," said Representative Jake Auchincloss, a former Marine who commanded infantry in Afghanistan.

Auchincloss spoke to reporters after a classified briefing for members of the House of Representatives by Secretary of State Antony Blinken, Director of National Intelligence Avril Haines, Defense Secretary Lloyd Austin and Joint Chiefs of Staff Chairman Mark Milley.

Leaders of the G7 major industrialized nations - Britain, Canada, France, Germany, Italy, Japan and the United States - met virtually to discuss how to complete the chaotic withdrawal and deal with the Taliban now that they have seized power.

The G7 leaders said they would remain committed to Afghanistan and back the United Nations in coordinating immediate humanitarian help in the region, which faces a new influx of refugees.

The talks did not result "in new dates" for the end of the evacuation mission, German Chancellor Angela Merkel said, although there were intensive discussions on whether a civilian-operated airport in Kabul could be used after Aug. 31.

The leaders agreed on the need to press the Taliban to allow people to leave after Aug. 31, Canadian Prime Minister Justin Trudeau said.

"Every foreign force member is working at a war-footing pace to meet the deadline," said a NATO diplomat, who declined to be identified.

The U.S.-backed Afghan government collapsed as the United States and its allies withdrew troops two decades after they ousted the Taliban in the weeks after the Sept. 11, 2001, attacks on the United States by al Qaeda militants, whose leaders had found safe haven in Taliban-ruled Afghanistan.

Leaders of the Taliban, who have sought to show https://www.reuters.com/world/asia-pacific/taliban-seek-present-moderate-face-they-take-control-afghanistan-2021-08-15 a more moderate face since capturing Kabul, have begun talks on forming a government that have included discussions with some old enemies, including former President Hamid Karzai.

Many Afghans fear reprisals and a return to a harsh version of sharia (Islamic law) that the Taliban enforced when in power from 1996 to 2001, in particular the repression of women.

Mujahid said there was no list of people targeted for reprisals and the group was trying to come up with a procedure so women could return to work.

"A fundamental red line will be the Taliban's treatment of women and girls," she told an emergency session of the U.N. Human Rights Council in Geneva.

Commenting on the G7 talks, Biden said: "We agreed that the legitimacy of any future government depends on the approach it now takes to uphold their international obligations, including preventing Afghanistan from being used as a base for terrorism, and we agreed that none of us are going to take the Taliban's word for it and will judge them by their actions."

British Prime Minister Boris Johnson said after the talks that if huge funds for Afghanistan were going to be unfrozen, the country could not be a breeding ground for terrorism.

The executive director of the World Food Programme, David Beasley, said the politics needed to be decided fast because the combination of conflict, drought and the COVID-19 pandemic meant that 14 million Afghans could soon face starvation.

In Moscow, Russian Foreign Minister Sergei Lavrov said the Kremlin was interested in serving as a middleman in resolving the crisis along with China, the United States and Pakistan. 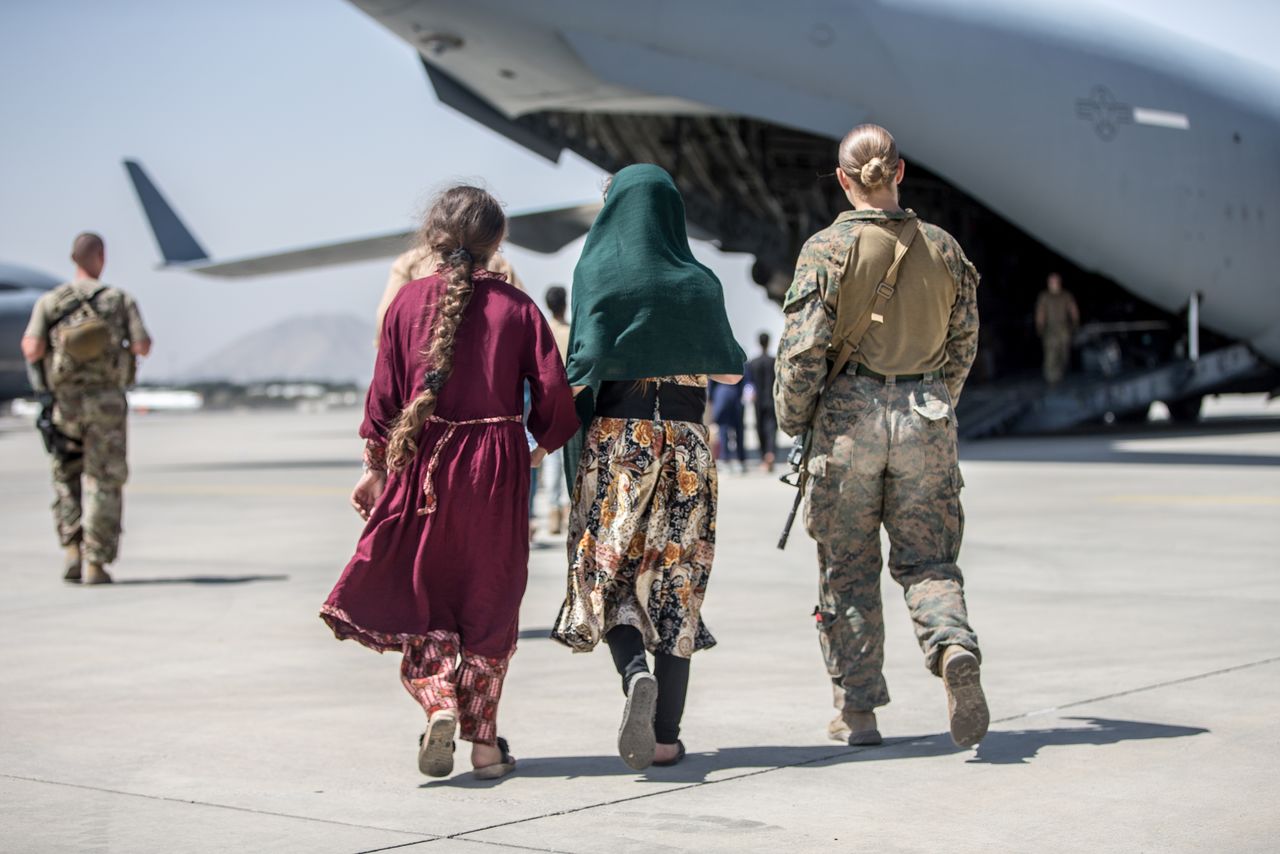 A Marine with the 24th Marine Expeditionary Unit walks with the children during an evacuation at Hamid Karzai International Airport in Kabul, Afghanistan, August 24, 2021. Sgt. Samuel Ruiz/U.S. Marine Corps/Handout via REUTERS 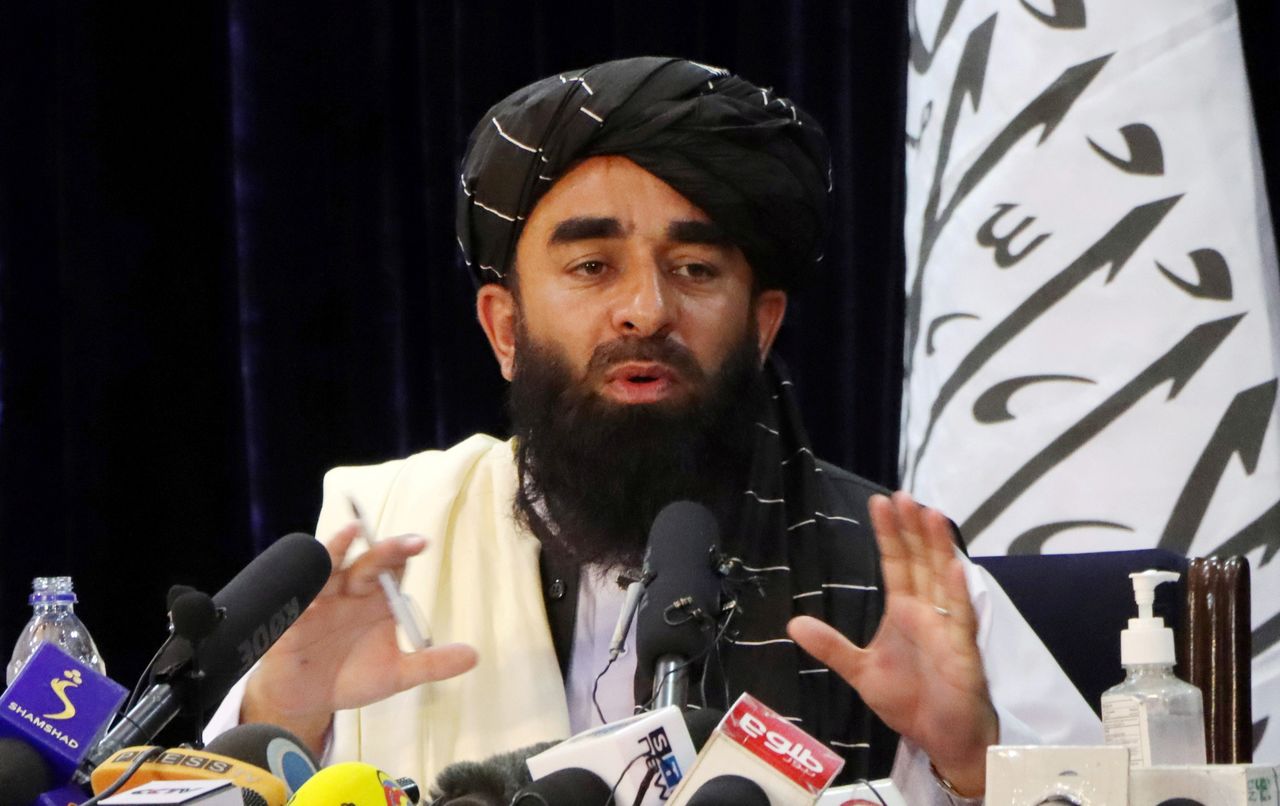 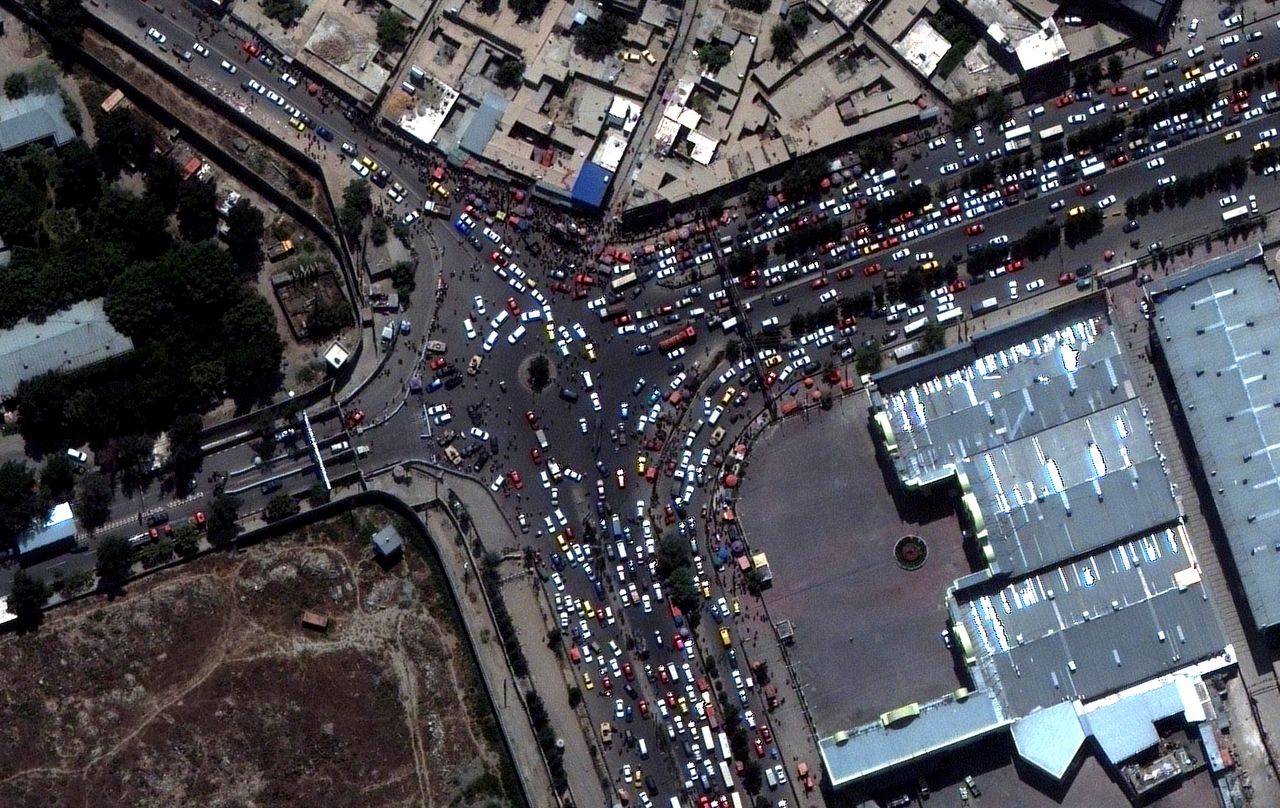 An overview of crowds and trafic at an entrance to Kabul's airport, Afghanistan August 23, 2021. SATELLITE IMAGE 2021 MAXAR TECHNOLOGIES/Handout via REUTERS 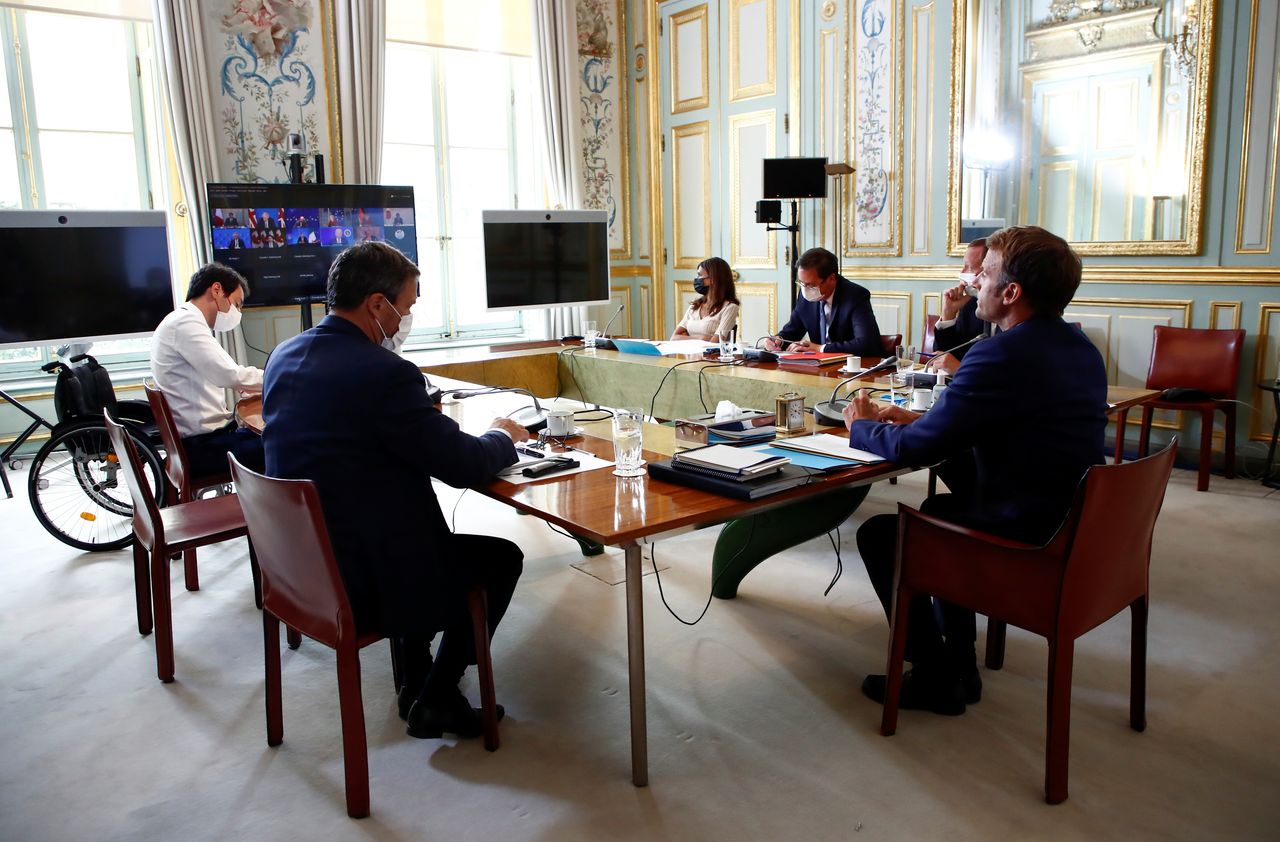 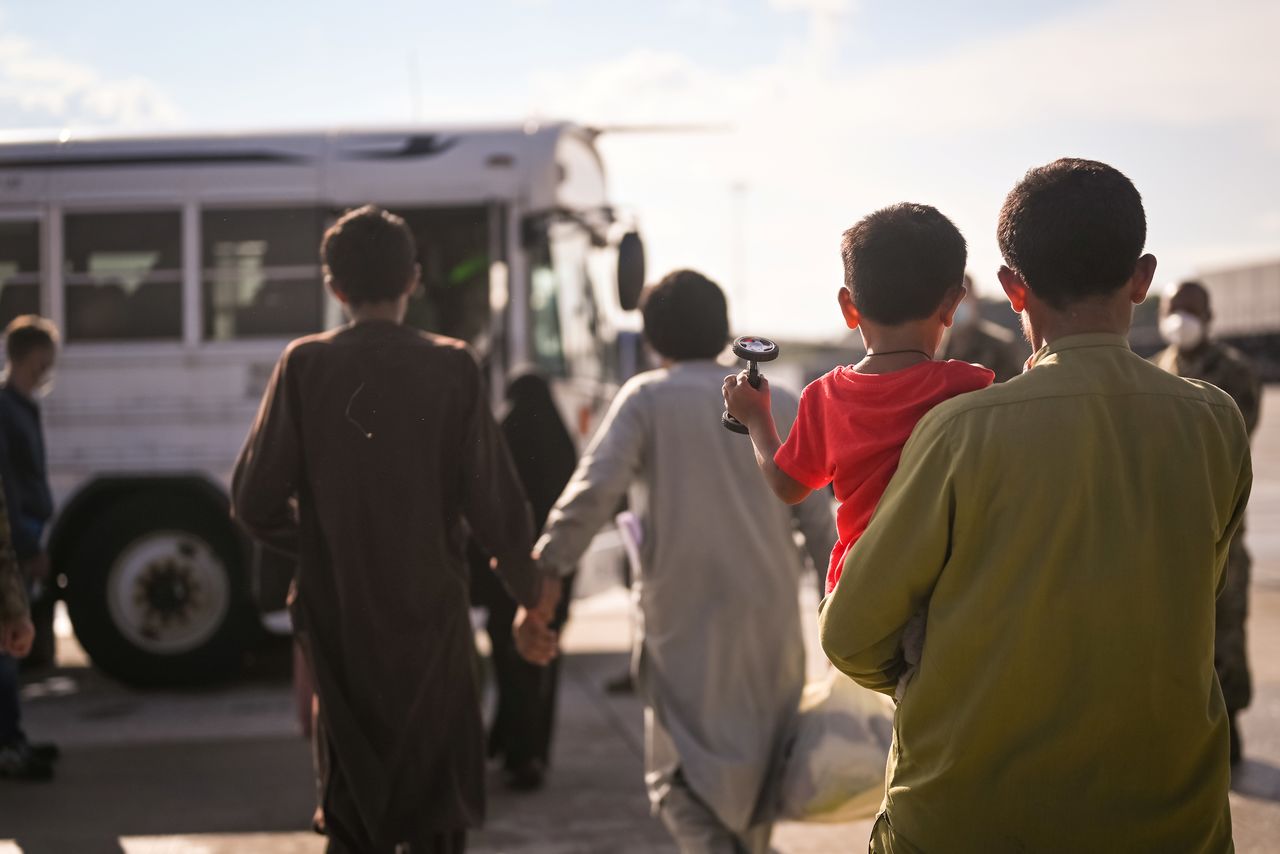 Evacuees from Afghanistan depart from a C-17 Globemaster III and board a transportation bus at Ramstein Air Base, Germany, August 22, 2021. U.S. Air Force/Senior Airman Jan K. Valle/Handout via REUTERS