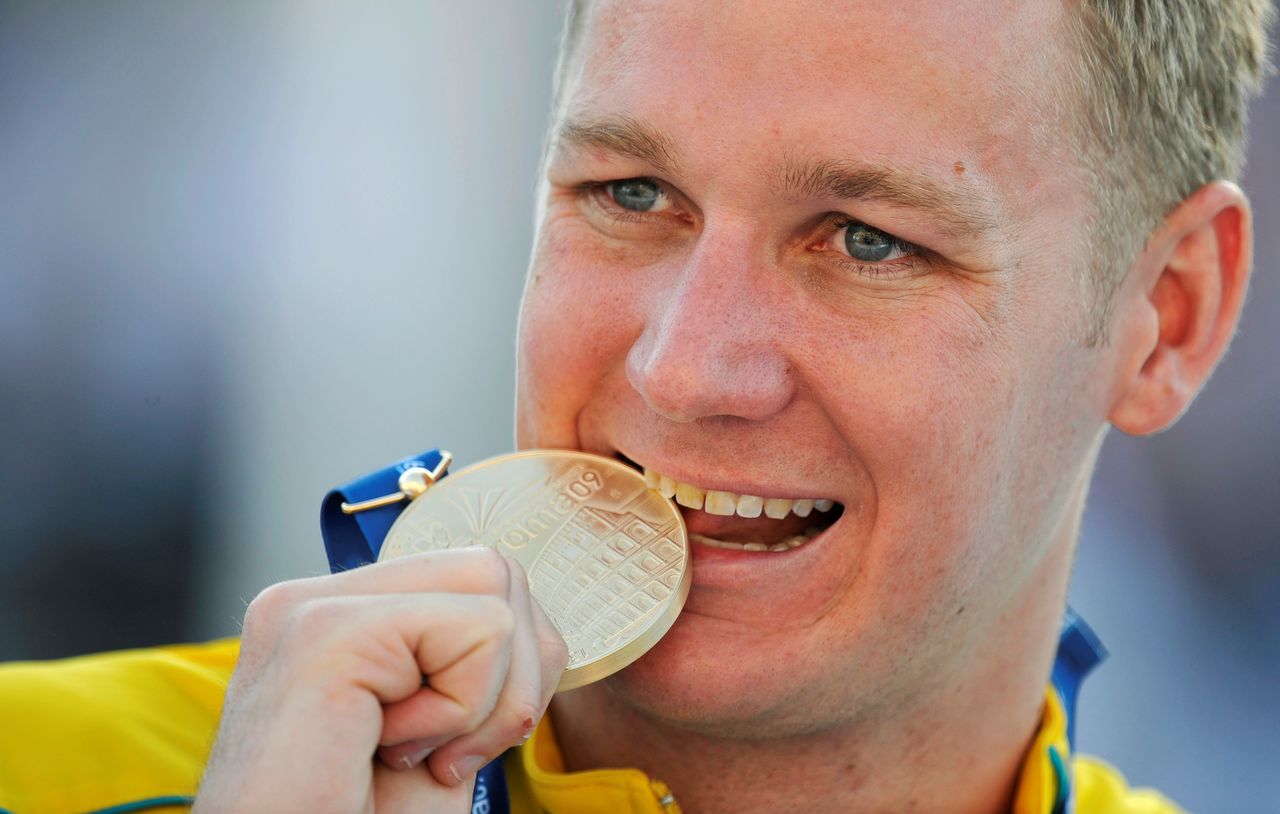 FILE PHOTO: Brenton Rickard of Australia bites his gold medal on the podium after setting a new world record in the men's 100m breaststroke swimming final at the World Championships in Rome July 27, 2009. REUTERS/Wolfgang Rattay/File Photo

MELBOURNE (Reuters) - Former world champion swimmer Brenton Rickard expressed relief after Olympic authorities withdrew from a doping case against him, and said he hoped his ordeal would help fine-tune a testing system to better weed out innocent athletes from guilty ones.

In a case that could have seen Australia stripped of Olympic medals for the first time, Rickard tested positive for Furosemide after a re-analysis of a sample he gave at the 2012 London Olympics found trace amounts of the banned diuretic and masking agent.

Rickard was part of the men's 4x100 metre medley team that won bronze at those Games.

He denied any wrongdoing and fought to keep the team's medals at the Court of Arbitration for Sport (CAS). On Tuesday he confirmed that the International Olympic Committee (IOC) had withdrawn from the CAS proceedings, effectively exonerating him.

"It is such a tough system to prove your innocence in," Gold Coast-based Rickard told Reuters in an interview on Wednesday.

The resolution came months after the World Anti-Doping Agency raised thresholds on test results for Furosemide and other banned diuretics to reduce the chance of athletes being wrongly accused of doping if contaminated from ingesting meat or other products.

Rickard, who suspected his positive sample was linked to contamination from over-the-counter medication he took in the week before the test, said WADA's rule changes had come too late for him to avoid a costly, 19-month battle to clear his name.

"Testing mechanisms have improved to the point they surpass contamination protocols in pharmaceutical manufacturing," he said.

"So I think I’m probably a bit of a victim of the law of unintended consequences.

"Hopefully this will lead to some changes in the system that work for future athletes as well, that protect the innocent ones whilst still enabling the system to prosecute those that do try to cheat."

Rickard, who won the world 100m breaststroke title at Rome in 2009, shared his good news with the six-member relay team from London, which included former freestyle world champion James Magnussen.

The 37-year-old father-of-two was glad he could now move on with his life as a sports consultant, having been barred from taking high-performance roles in Australia while under the doping cloud.

But he also felt drained by the drawn-out legal proceedings, which he estimated left him at least A$100,000 ($72,400) out of pocket in legal fees and foregone income.

"You win in some regards but in others you still end up losing," he said.

"My son Oliver was three months old when I was notified of my charge. He's approaching two years old now so I look forward to having a bigger part in his life."

(Reporting by Ian Ransom in Melbourne; editing by John Stonestreet)