Tennis-Djokovic gets second bite at history in the Big Apple 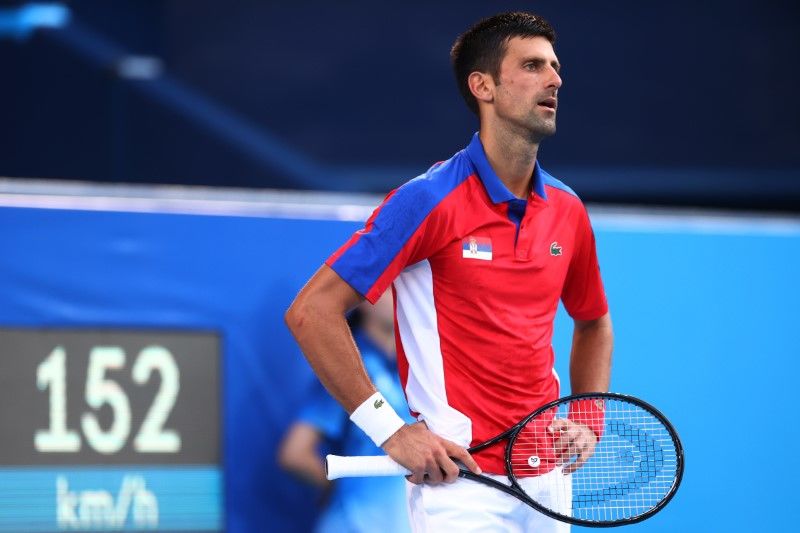 (Reuters) - After an Olympic stumble Novak Djokovic will get a second bite at history in the Big Apple with a calendar year Grand Slam there for the taking at the U.S. Open.

Having seen his bid for a Golden Slam - Olympic gold and four slams in the same year - wilt in the Tokyo heat, Djokovic arrives in New York positioned to become the first man since Rod Laver in 1969 to win the Australian and French Open titles plus Wimbledon and the U.S. Open in the same year.

A U.S. Open triumph would also give the Serb a record-setting 21st career Grand Slam title - one more than his great rivals Roger Federer and Rafa Nadal, who will both be absent.

For almost two decades the Flushing Meadows hard courts have been ruled over by the Big Three of Federer, Nadal and Djokovic.

Between them the trio have claimed 12 of the last 17 U.S. Opens. Only twice over that period has a final not featured at least one of them.

But with Federer and Nadal sidelined by injuries the old guard has been reduced to one.

While Djokovic has idled since the Tokyo Olympics, his biggest threats Alexander Zverev, Stefanos Tsitsipas and Daniil Medvedev have been building up a head of steam going into the year's final Grand Slam.

No player has been in better form than the 24-year old Zverev, who followed up his gold medal at the Tokyo Games with an imperious march to the ATP Masters 1000 title in Cincinnati last Sunday.

Medvedev has also been quick to find his footing on the North American hard courts by winning the ATP Masters 1000 event in Toronto.

Tsitsipas has been in the spotlight over his resistance to taking a COVID-19 vaccine but the Greek has not let controversy distract him from advancing to the semi-finals in the Toronto and Cincinnati stops.

"I don’t want to get ahead of myself yet," said Zverev following his Cincinnati win. "Let's see how it goes ... I still have a lot of work ahead of me."

As the U.S Open approaches there is a growing sense that Flushing Meadows will deliver a breakthrough moment.

Now regular winners on the ATP Tour and Grand Slam battle-tested, the demands and expectations of competing in the big events are no longer part of the learning curve for Zverev, Medvedev and Tsitsipas.

This year Medvedev contested the final of the Australian Open and Tsitsipas the French, both losing to Djokovic.

In 2019 Medvedev lost the final at Flushing Meadows in an epic five-set tussle with Nadal.

Last year Zverev was denied a maiden major at the U.S. Open, falling to Dominic Thiem who will not be back to defend his title due to a wrist injury.

After each of his Grand Slam wins Djokovic has applauded his opponent, encouraging them that their day will come.

That day could be Sept. 12, the afternoon of the men's final at Flushing Meadows.

But even with complaints of fatigue, a sore shoulder and an ill-tempered racket-tossing meltdown in Tokyo, few will be betting against Djokovic in New York.

It may not be his favourite venue - particularly after last year when the Serb was disqualified for swatting a ball in frustration that struck a female line judge - but he is almost always in contention, having reached the final on eight occasions and winning three.

But while Djokovic has won eight of the last 12 Grand Slams, the list includes only one U.S. Open.

"To me it is him against the field and I pick him right now," said John McEnroe, a seven-time Grand Slam winner and commentator for ESPN.

"I still think he is going to do it but it's easier said than done (to win a calendar Grand Slam). There's a reason it hasn't been done in 50-some years. It's tough, it's really tough."