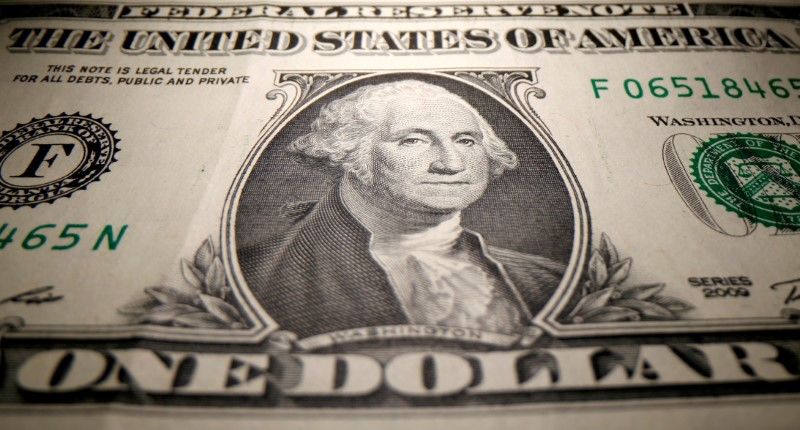 FILE PHOTO: A U.S. dollar banknote is seen in this illustration taken May 26, 2020. REUTERS/Dado Ruvic/Illustration

The dollar index, which measures the greenback against a basket of six major trading currencies, traded a bit higher just before the remarks by James Bullard, the president of the St. Louis Fed, who is considered a hawk on policy.

Bullard said in comments to CNBC that he was skeptical that inflation would moderate and for that reason the Fed needed to start tapering its bond-purchasing program.

"We have to get going on taper, get the taper finished by the end of the first quarter of next year. Then we can evaluate inflation, what the situation is," Bullard said.

Dallas Fed President Robert Kaplan said the strength of the U.S. economy still puts the Fed on track to begin reducing its monthly bond purchases in October or soon after.

Two weeks ago the dollar index rose above 93 and has been testing that level since then as a support level, said Steven Ricchiuto, U.S. chief economist at Mizuho Securities USA LLC.

The market will likely discount what Bullard said, in part because he is a non-voting member of the Fed's policy-setting committee, but "his voice is heard in the room and you have to assume therefore it does have some impact," Ricchiuto said.

Analysts doubt Powell will offer new hints about when the Fed may start to cut its asset purchases.

Powell will reiterate Kaplan's message last week of being flexible and will have done a good job if the markets don't move when he speaks, said Lee Ferridge, North American head of multi-asset strategy at State Street Global Markets.

"He doesn't want the markets to panic that they're going to taper into a slowing economy," Ferridge said. "He’s going to walk this line of leaving the taper on the table but putting out the idea of flexibility as well."

Currency market swings have eased ahead of Powell's speech, with implied euro-dollar volatility at a one-week low.

The won gave up initial gains, however, to fall 0.6% after the hike, which had been well-flagged. (Graphic: Bank of Korea's policy interest rate, https://graphics.reuters.com/SOUTHKOREA-ECONOMY/RATES/jnpweeloopw/chart.png)

The looney has not broken through the 1.25 level with the U.S. dollar because of growth expections, uncertainty over the upcoming election in Canada and a recent decline in commodity prices, State Street Global Markets' Ferridge said.