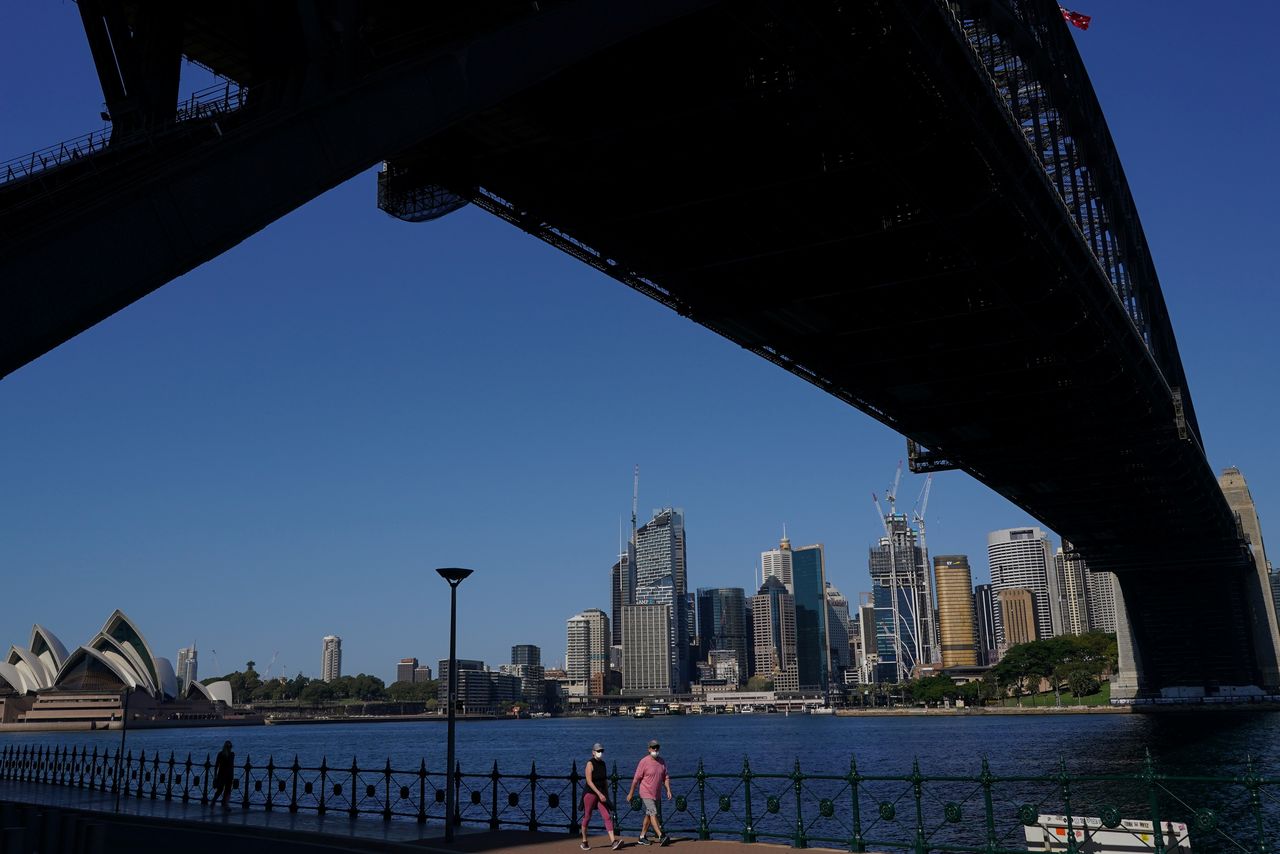 People in protective face masks walk under the Sydney Harbour Bridge during a lockdown to curb the spread of a coronavirus disease (COVID-19) outbreak in Sydney, Australia, September 3, 2021. REUTERS/Loren Elliott

Australia will receive an additional 4 million doses of Pfizer's COVID-19 vaccine this month after agreeing a swap deal with Britain, to help accelerate its vaccination programme amid a record surge in infections.

The deal, announced by Prime Minister Scott Morrison on Friday, will double the availability of Pfizer vaccines this month, with the first shipment of vaccines from Britain expected to arrive over the weekend.

New Zealand reported 28 new cases on Friday, a big drop compared to the last few days, as authorities said the country was breaking the chain of transmission of the highly infectious Delta variant.

Vietnam's coronavirus epicentre Ho Chi Minh City is proposing to emerge from a strict lockdown and resume economic activities from Sept. 15, shifting from its "Zero-COVID-19" strategy to living with the virus, according to a draft proposal.

The city of 9 million people is targeting a phased reopening of its economy and the full vaccination of its citizens by the end of this year, according to the draft seen by Reuters, which has yet to be endorsed.

Ho Chi Minh City last month deployed troops to enforce its lockdown and prohibited residents from leaving their homes to slow a spiralling rate of deaths. Just 2.9% of Vietnam's 98 million population has been fully vaccinated.

China is facing growing difficulties in expanding its mass vaccination drive, but it will continue to inoculate more people and step up the programme of booster shots, a health official said on Friday.

Zheng Zhongwei, an official at the National Health Commission, did not specify the obstacles but stressed that those who have not been vaccinated could not rely on being protected by those who have had the shots amid concerns over the Delta variant.

He said China has given full doses to about 900 million people, or more than 60% of its 1.4 billion population, but cited some experts saying China may need a vaccination rate higher than 80%.

AstraZeneca and the European Commission have reached a settlement on the delivery of 200 million pending COVID-19 vaccine doses by the drugmaker, ending a row about shortages that had weighed on the company and the region's vaccination campaign.

The dispute plunged the European Union into crisis earlier this year as states, under pressure to speed up vaccinations, scrambled for shots. It also caused a public relations crisis for AstraZeneca.

Europe's medicines regulator said on Friday it was reviewing if there was a risk of a rare inflammatory condition after inoculation with COVID-19 vaccines, following a report of one case with Pfizer/BioNTech's shot.

The European Medicines Agency's safety committee is looking into multisystem inflammatory syndrome after a 17-year-old male in Denmark reported the condition, the regulator said, adding that the teenager had since fully recovered.

South Africa says C.1.2 variant not a threat for now

South Africa's Health Minister Joe Phaahla said on Friday that scientists had told the government that at this stage the C.1.2 coronavirus variant detected locally was not a threat.

The variant was first identified in May and has now been seen in all of the country's nine provinces.