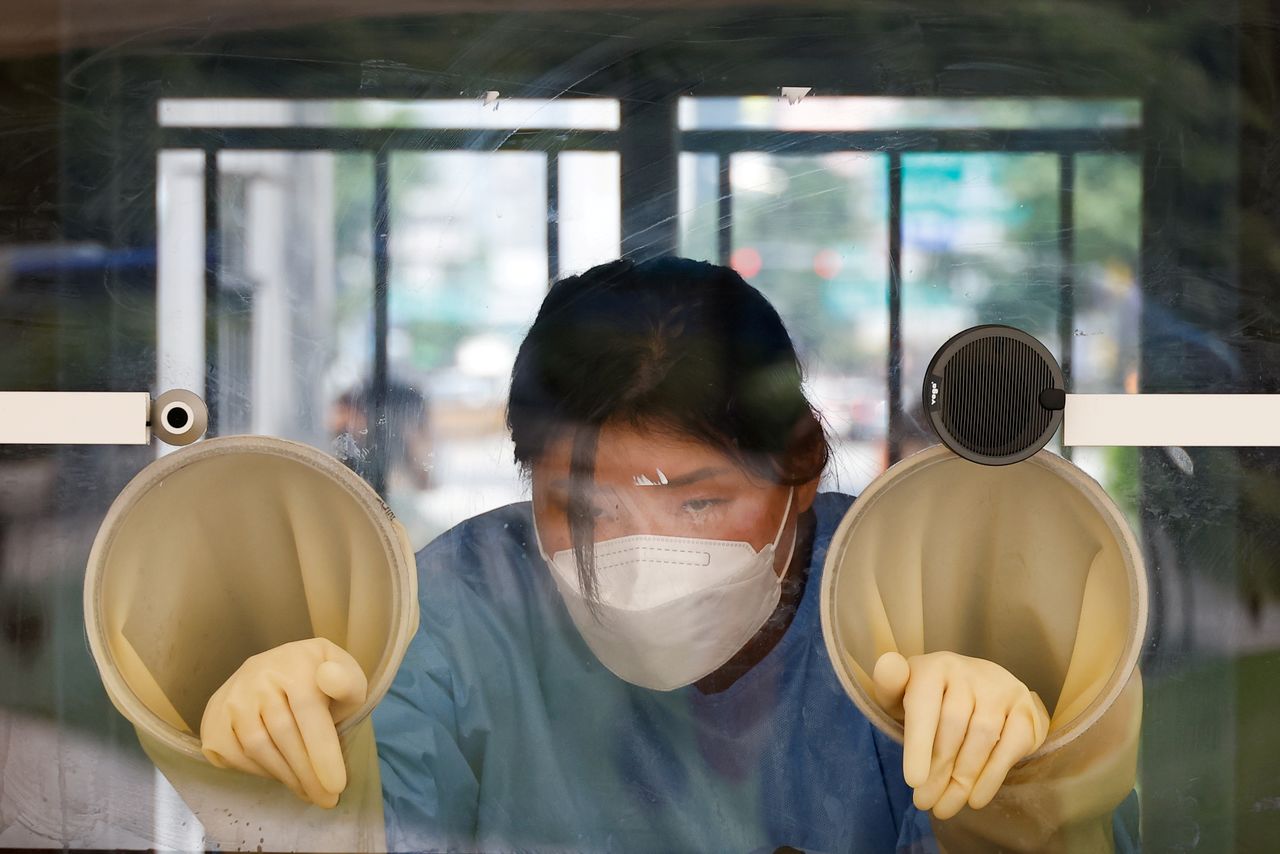 FILE PHOTO: A health worker rests inside a booth as she conducts a coronavirus disease (COVID-19) test at a coronavirus testing site in Seoul, South Korea, July 15, 2021. REUTERS/Kim Hong-Ji/File Photo

SEOUL (Reuters) - South Korean government officials were in last-ditch efforts on Wednesday to stave off a strike by health workers who say they are exhausted from battling waves of COVID-19 outbreaks and need more personnel and better work conditions.

The Korean Health and Medical Worker's Union has warned some of its 80,000 members, including nurses, medical engineers, pharmacists and administrative hospital staff, would begin striking from Thursday if demands are not met.

Lee Ki-il, South Korea's deputy minister of health care policy, said at least 104 hospitals out of around 3,400 across the country are set to participate in the strike.

"Most of the 104 hospitals are large major hospitals and designated to treat infectious diseases."

The union said it has not put a timeline on how long the strike might go on.

The government and the union have previously met for talks 12 times since May, including a 14-hour marathon session on Monday, but have not been able to find common ground.

The union argues its workers are often working double or triple shifts and need better pay and working hours. It is also seeking higher rates of staffing, the establishment of more public hospitals and the introduction of a recommended nurse to patient ratio. The United States has a recommended ratio of 1:5 and Japan has 1:7 while South Korea has none.

For its part, the government has said it plans to expand funding for public medicine but demands such as establishing more hospitals could be too expensive and need agreements of many parties on many levels.

It was not immediately clear how crippling the strike could be. Government officials say only a certain percentage of workers are expected to join and essential services such as emergency rooms, surgeries and dialysis will still operate.

South Korea reported 2,025 new COVID-19 cases for Tuesday, not far off a record daily high marked earlier last month. Early success in mitigating outbreaks has given way to strains on the hospital system as the Delta variant spreads, though the country's mortality rate remains relatively low at 0.9%.

Around 57.0% of South Korea's population of 52 million population has been given one dose of a vaccine, while 30.7% have been fully vaccinated. The government wants 70% of its citizens to have had at least one shot by the end of September.

The health ministry said on Wednesday it has secured 1.5 million doses of Pfizer/BioNTech and Moderna's COVID-19 vaccines from Romania. It plans to begin giving out COVID-19 booster shots from October.