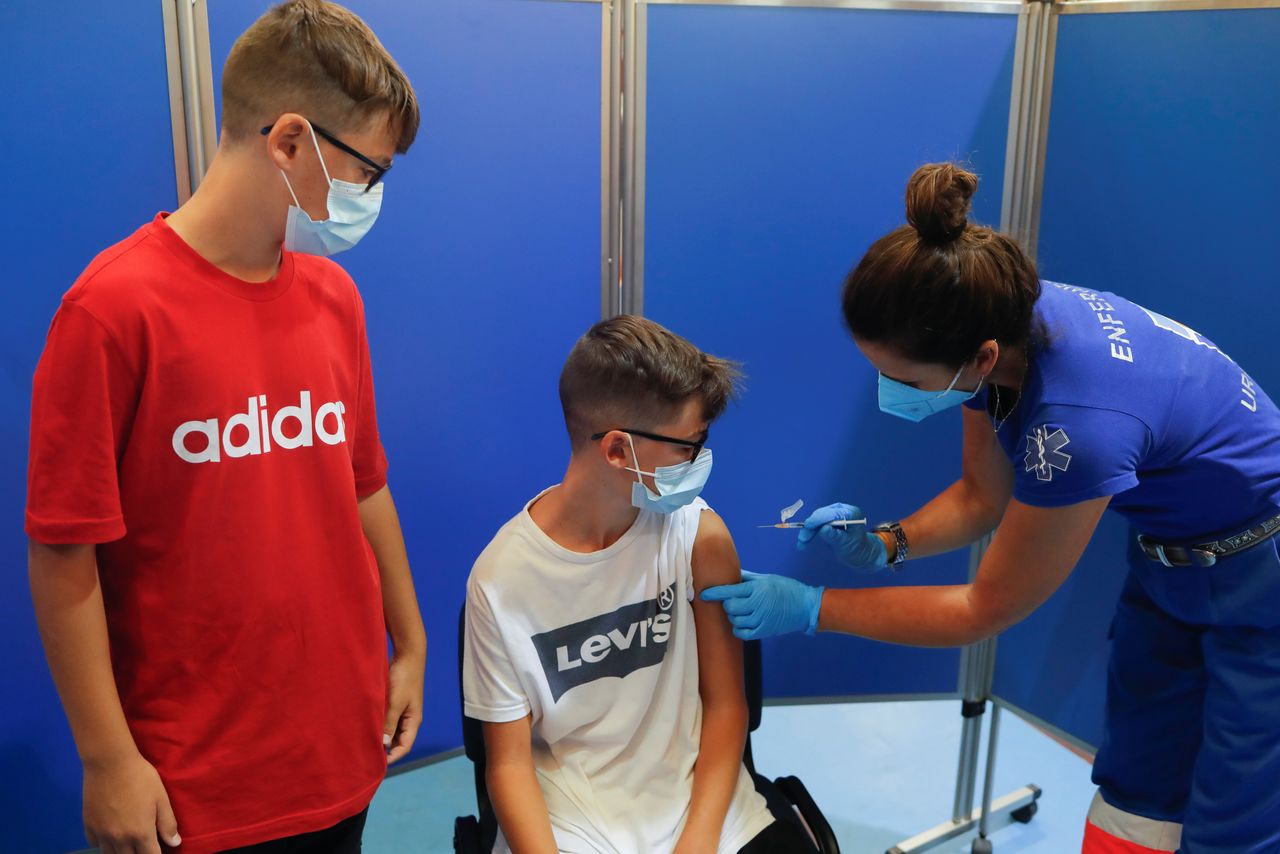 FILE PHOTO: Oliver Ortega, 13, receives the second dose of the Pfizer-BioNTech "Comirnaty" vaccine against the coronavirus disease (COVID-19) as his twin-brother Aitor waits his turn next to him, during a vaccination rollout for minors between 12 and 17 years old, ahead of the start of the school year, at a vaccination centre in Ronda, Spain September 1, 2021. REUTERS/Jon Nazca

(Reuters) - Some Asia-Pacific countries reported higher daily cases, with Australian doctors warning their hospitals are not ready for reopening plans, while booster vaccine shot talks came to the fore in the U.S. after Moderna sought a nod for a third dose.

* Britain will give severely immunosuppressed people a third dose of COVID-19 vaccine to increase their chances of generating a better immune response.

* Oxford University professor Sarah Gilbert, biologist Catherine Green and the team behind the Oxford/AstraZeneca vaccine were named heroes of the year during the GQ Men Of The Year Awards.

* Spain said 70% of its population had been fully vaccinated against COVID-19, fulfilling a goal set by the government for August, while the incidence rate kept the decreasing tendency of the past month after a big surge.

* Moderna and Takeda Pharmaceutical said they are working with Japanese authorities to recall three batches of COVID-19 vaccine after an investigation found stainless steel contaminants in some vials.

* The first batch of BioNTech's vaccine arrived in Taiwan, helped by the involvement of two of the world's most important tech firms after months of heated political and diplomatic wrangling.

* The Australian Medical Association said the health system was in danger of being locked into a "permanent cycle of crisis" and has called for new modelling to see if staffing in hospitals can withstand a surge when lockdown eases.

* New Zealand reported a drop in new cases, which authorities said was a sign that a nationwide lockdown was helping to limit the Delta variant's spread.

* More than half of U.S. companies are planning to impose COVID-19 vaccine mandates in the workplace by year end, with almost a quarter considering vaccination as a condition for employment, according to a national survey of nearly 1,000 employers.

* Infections are surging again in North America and hospitalization rates among young people and adults below the age of 50 are higher now than at any point in the pandemic, the Pan American Health Organization said.

* South African drug manufacturer Aspen Pharmacare is in talks with Johnson & Johnson to expand its production in South Africa of the latter's COVID-19 vaccine.

* Pfizer and Merck announced on Wednesday new trials of their experimental oral antiviral drugs for COVID-19 as the race to develop an easy-to-administer treatment for the potentially fatal illness heats up.

* Moderna has asked the U.S. Food and Drug Administration to allow the use of a third booster dose of its COVID-19 vaccine.

* Asian share markets were in a cautious mood on Thursday as concerns grew over the Chinese economy after a run of soft data, while the risk of a subpar U.S. payrolls report kept the dollar on the defensive. [MKTS/GLOB]

* U.S. manufacturing activity unexpectedly picked up in August amid strong order growth, but a measure of factory employment dropped to a nine-month low, likely as workers remained scarce.