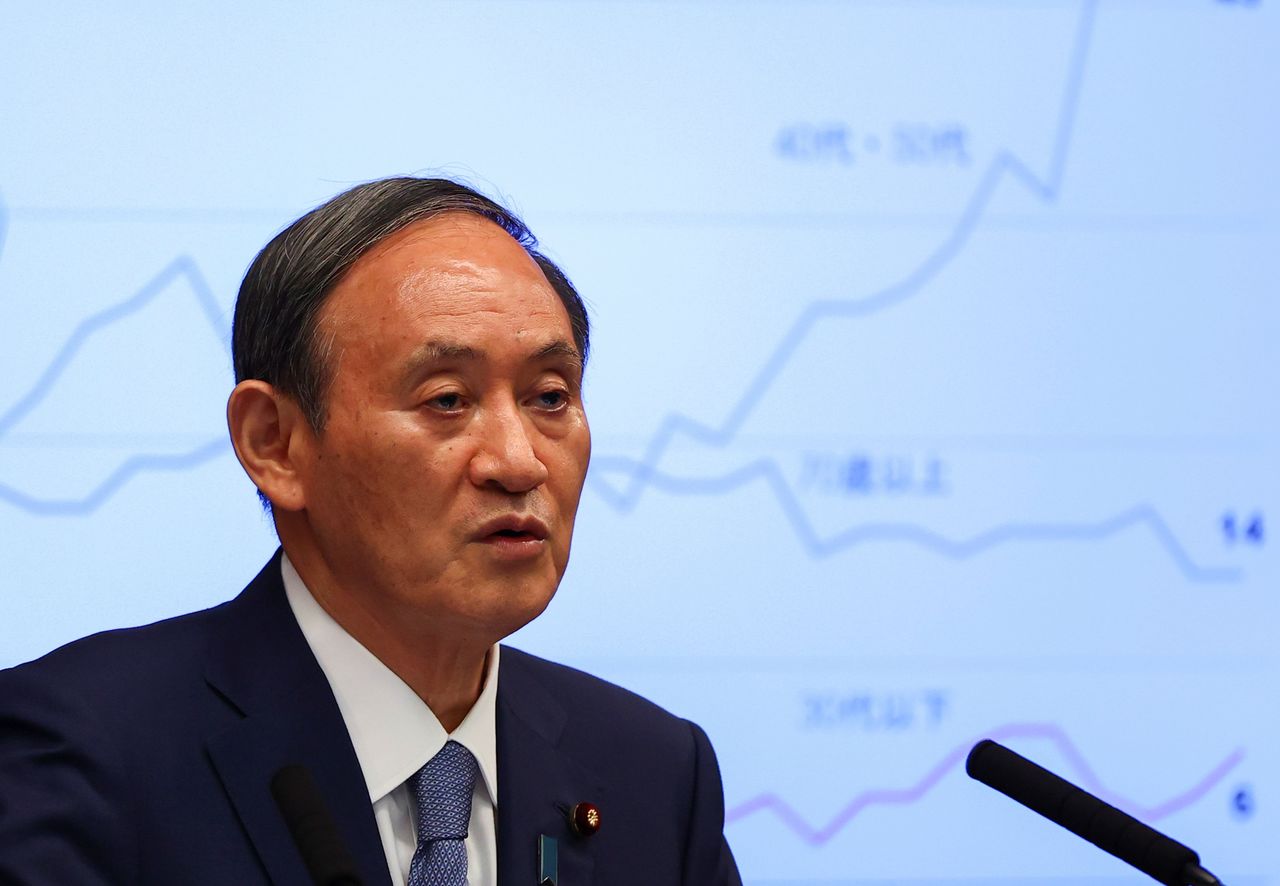 TOKYO (Reuters) - Japanese Prime Minister Yoshihide Suga said on Friday he had decided not to run in the ruling Liberal Democratic Party's leadership race, setting the stage for his replacement after just one year in office.

Japan's TOPIX stock index rose 1.6% to a 30-year high in afternoon trade after the news and the Nikkei jumped about 1.8%. The Japanese yen bobbled higher before drifting a fraction lower to 110.025 per dollar.

Here are some reactions to the news from politicians and market watchers;

“In all honesty I was surprised to hear it. But given he said this as LDP leader, I’m sure he gave the decision much thought. I thought that it wouldn’t be appropriate to argue with him, so I think it’s best to accept his decision and focus our efforts on managing the party.”

"With Suga leaving the job, the prevailing trend will be for (Fumio) Kishida (to win the party leadership race).

"When it comes to popularity, (administrative reform minister Taro) Kono exceeds, but he would skip too many generations as prime minister. (Former defence minister Shigeru) Ishiba is also popular, but he would have a hard time winning support from various factions within the party."

"This (Suga's resignation) is a situation that I had not even given any thought to."

"It felt like time had stopped, why has it come to this… as you know there was a lot of criticism, inside the party as well, and I was seeing this unfold from a distance but thought that he would continue with his role without being swayed by those voices because a job is a job."

"It is irresponsible of the Prime Minister, and I cannot help saying that the Liberal Democratic Party, which has allowed the situation to come to this, has no mandate any more to run the government."

"If there is uncertainty about the continuity of the policy direction, the market will be very concerned, but at this moment, Japan is in the grip of the coronavirus pandemic so basically the policy direction won't change (under a new leader), so I don't think there is much impact on the FX market."

"Kishida will be considered as a major candidate for his successor given that he took risk and raised his hand. But Suga's decision to resign also means some other people, such as (former party Secretary-General Shigeru) Ishiba and (Foreign Minister Toshimitsu) Motegi, might also consider running."

"It's seen as favourable (by financial markets) that a government that saw its support fall considerably is ending."

"Hopes of more effective coronavirus policies are rising and that's leading to higher stock prices. Another reason is that depending on the outcome of its leadership election, the LDP may be able to avoid a big loss in the upcoming Lower House elections. If that happens, it will lead to political stability."

"I guess we are possibly back to the politics we have known in Japan pre-Abe. If you look at post-war Japanese politics the average tenure of prime ministers has been a lot less than four years.

"From a stock market point of view we know that the LDP has got a firm position and there isn't really any credible opposition. ..there's quite a bit of certainty around issues such as corporate tax or anything that could affect share prices.

"The market reaction might be a combination of other factors, on currency, on the U.S., on the rest of the world. I think the political equation is quite modest. Investors in Japanese equities are used to frequent changes of Prime Minister within an LDP context."

"It really depends on who is next and who is running for the position. From a market practitioner standpoint the question to ask is whether policies will change, and if policies aren't changing then it doesn't matter too much to the market.

"It should not be a surprise, Abe was a once in a multi-generation leader and it will be a while before Japan sees that form of leadership again.

"We can expect fiscal and political gridlock for future administrations, which is not constructive for long-term policy and monetary policy is tapped out with ... they are all out of bullets and Godzilla (Abe) has left the building."

"Now that it's an open race, anyone can run ... The question is what will (former premier Shinzo) Abe and (Finance Minister Taro) Aso decide. They must be thinking whom to back - they want someone who is both popular and a puppet."

"(Former defence minister Shigeru) Ishiba - does he have the 20 signatures needed to run? He has 17 in his faction, in contrast to (former foreign minister Fumio) Kishida, who has a bigger faction and has made himself credible as a candidate. Ishiba has come across as indecisive."

"Kishida is the top runner for the time being but that doesn't mean his victory is assured."

"It was a surprise, but it provided more certainty and forward-looking prospects rather than uncertainty as the market had been informed of Kishida's policies (at his Thursday press conference) such as expansionary fiscal policy, support for household incomes and new measures to combat the coronavirus."

"Stock prices are rising based on a view that the chance of LDP's defeat in the general election has diminished because anyone other than Suga will be able to regain popularity."

"Regardless of who runs for the party leadership race with what kind of policy manifestos, the market seems to favour the increased prospect that the current LDP administration will continue stably."