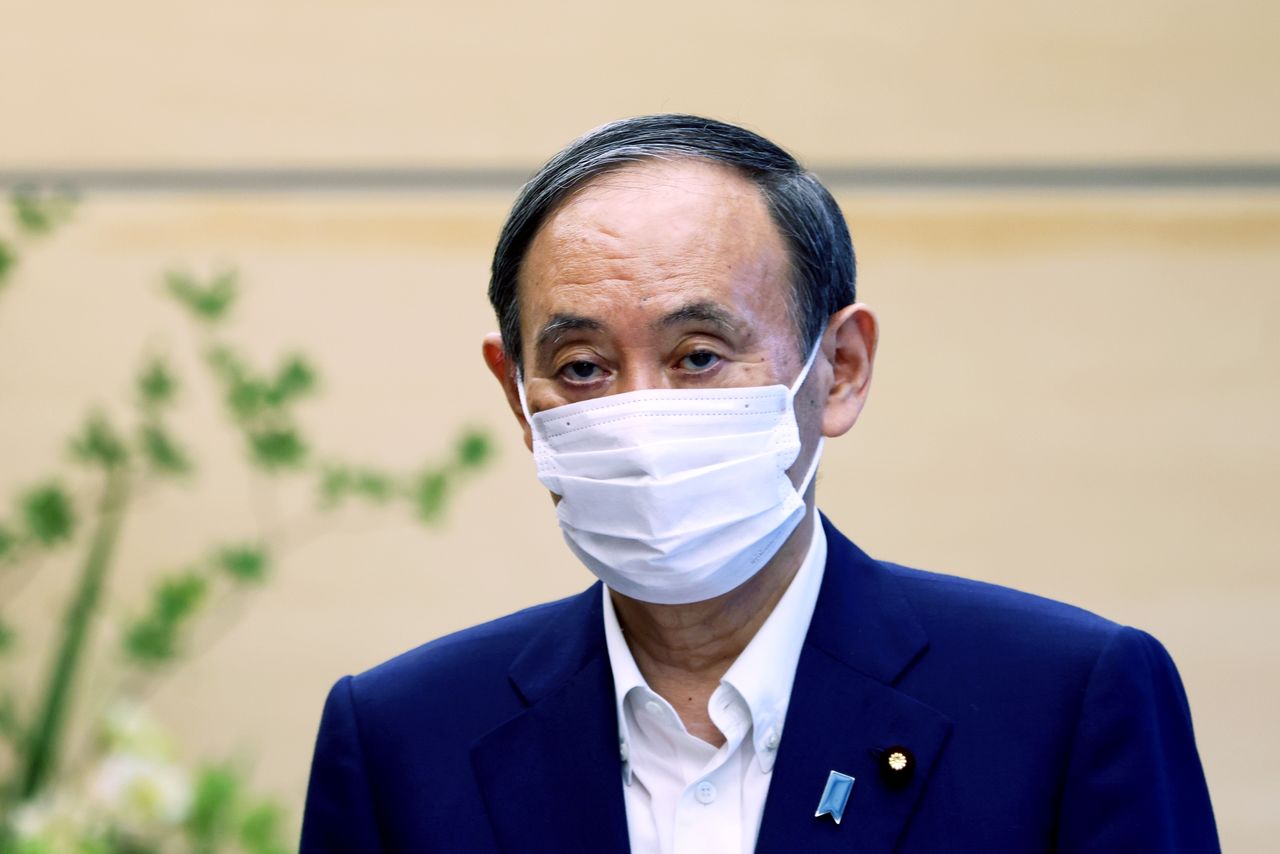 Japan's Prime Minister Yoshihide Suga attends a meeting with president of the International Paralympic Committee (IPC) Andrew Parsons in Tokyo, Japan September 3, 2021, following his announcement that he will not seek re-election for Liberal Democratic Party (LDP) leadership this month. Behrouz Mehri/Pool via REUTERS

(Reuters) - Japanese Prime Minister Yoshihide Suga said on Friday he would step down https://www.reuters.com/world/asia-pacific/japans-ruling-party-execs-meet-pm-suga-struggles-ahead-election-2021-09-03, setting the stage for a new premier after a one-year tenure marred by an unpopular COVID-19 response and sinking public support.

Suga took over after Shinzo Abe resigned last September. Before Abe's record eight-year tenure, the role of prime minister was a revolving door https://www.reuters.com/world/asia-pacific/japans-suga-danger-becoming-another-revolving-door-premier-2021-07-15, with six premiers in as many years.

Here is a timeline of some of the key events in Suga's term:

Sept. 14, 2020: Suga wins the Liberal Democratic Party (LDP) leadership election by a landslide, ensuring he will be premier. He promises to continue Abe's main policies while pursuing reforms, including deregulation and breaking down bureaucratic silos.

Sept. 16: Suga is chosen prime minister by parliament and says Japanese people want to contain the coronavirus outbreak and revive the economy. Polls a day later show Suga's government is backed by at least two-thirds of respondents.

Oct. 5: Suga comes under fire for rejecting six scholars for a science advisory panel, an unprecedented move criticised as a violation of the constitution's principle of academic freedom. Suga says his decision was legitimate.

Oct. 26: Japan aims to become carbon-neutral by 2050, Suga says, unveiling a major shift in the country's position on climate change.

Nov. 10: Suga tells his cabinet to compile an economic stimulus package to revitalise the pandemic-hit economy.

Nov. 17: Japan and Australia agree on a breakthrough defence pact during a visit to Tokyo by Prime Minister Scott Morrison.

Dec. 4: In his first news conference since the surge in infections, Suga defends the travel subsidy campaign. The next week he announces the stimulus package will be worth some $700 billion.

Dec. 16: Suga draws further criticism for joining year-end get-togethers after begging the public to avoid parties due to the coronavirus. He later apologises, urging people to have a quiet, distanced New Year, and announces a $2.6 billion package for hospitals treating COVID-19 patients.

Jan. 7, 2021: Suga declares a state of emergency for Tokyo and three surrounding prefectures to combat the rise in coronavirus infections. States of emergency are alternatively lifted and reimposed in the capital in subsequent months tracking infection numbers.

Jan. 18: Despite growing public opposition to the Olympics, Suga vows to forge ahead with the Games, which had been postponed a year by the pandemic.

June 9: Suga laments taking the heat for the decision to go ahead with the Olympics while COVID-19 rages.

July 4: The LDP and allies fare badly in a local election in Tokyo seen as a key test of voter sentiment ahead of national polls.

July 19: South Korean President Moon Jae-in scraps plans for his first summit with Suga over disparaging remarks by a senior diplomat at Japan's embassy in Seoul.

July 26: Suga's support slides further as the Olympics begin in the shadow of the pandemic.

Aug. 3: Japan shifts COVID-19 policy to focus on hospitalising patients who are seriously ill or at risk of becoming so.

Aug. 26: Former foreign minister Fumio Kishida challenges Suga in the LDP leadership election scheduled for Sept. 29. The winner must call a general election and lead the LDP in it by Nov. 28.