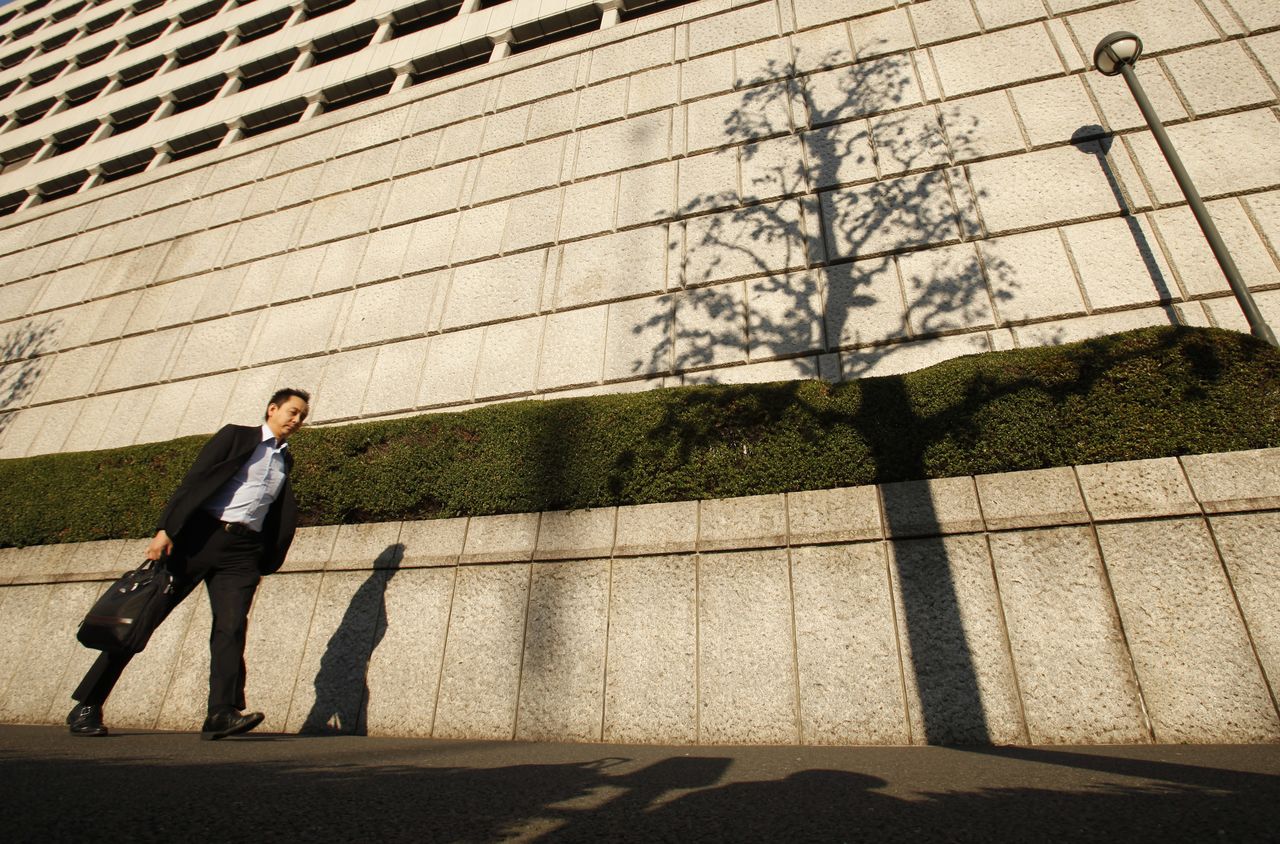 FILE PHOTO: A pedestrian walks past the Bank of Japan headquarters in Tokyo October 27, 2011. REUTERS/Yuriko Nakao

TOKYO (Reuters) - Japanese Prime Minister Yoshihide Suga, his support ratings in tatters ahead of a general election, said on Friday he would step down, setting the stage for his replacement as premier and heightening uncertainty on the outlook for economic policy.

Below are the key economic policy views of the candidates to become Japan's next prime minister.

A former foreign minister with experience as a banker, Kishida has said that if he were to become ruling party head, fiscal consolidation would be a major policy pillar.

He has also voiced doubts over the Bank of Japan's prolonged ultra-loose monetary policy. In 2018, Kishida said the BOJ must start thinking about when to normalise monetary policy as "few people think the current easing can go on forever."

With the economy staggering from the COVID-19 pandemic, Kishida said on Thursday Japan must maintain ultra-low interest rates for now and deploy a fiscal stimulus package worth "tens of trillions of yen."

Kishida also stressed the need to distribute more wealth to households, in contrast to the focus of Abenomics on boosting corporate profits in hope the benefits will eventually trickle down to wage-earners.

A former internal affairs minister and a close associate of Abe, Takaichi has said she would deploy a remodelled version of "Abenomics", including bold monetary easing.

In a recent interview with domestic media, Takaichi said Japan should freeze a goal for achieving a balanced budget until inflation hits the central bank's 2% target, so that both fiscal and monetary policies are expansionary.

She also said Japan should issue more government bonds to pay for investment in growth areas, because it "does not need to worry about defaulting on its debt" given low borrowing costs and the central bank's ability to print money.

Having served as minister in charge of administrative reform and deregulation, Kono has called for cutting wasteful spending in areas including Japan's ballooning medical fees. On his website, he also proposes accepting foreign workers to address a chronic labour shortage caused by a rapidly ageing population.

As head of a ruling party panel on administrative reform in 2017, Kono urged the BOJ to communicate more clearly on an exit strategy from ultra-loose policy. He said the longer the BOJ keeps expanding its balance sheet, "the more difficult it would be to exit."

A former defence minister and a rival of Abe, Ishiba has been a vocal critic of Abenomics, saying the policies made stock-holders rich by propping up share prices but brought few benefits to workers.

He has also criticised the BOJ's ultra-low interest rates for hurting regional banks and called for bigger public works spending to remedy inequality.

In an interview with Reuters last year, Ishiba said Japan's fiscal and monetary stimulus measures have become so big that rolling them back could destabilise the economy.

He keeps a distance from advocates of big spending. In the interview, Ishiba voiced caution over cutting Japan's sales tax or offering blanket payouts, saying any aid must be targeted to households and small firms hit hardest by the pandemic.