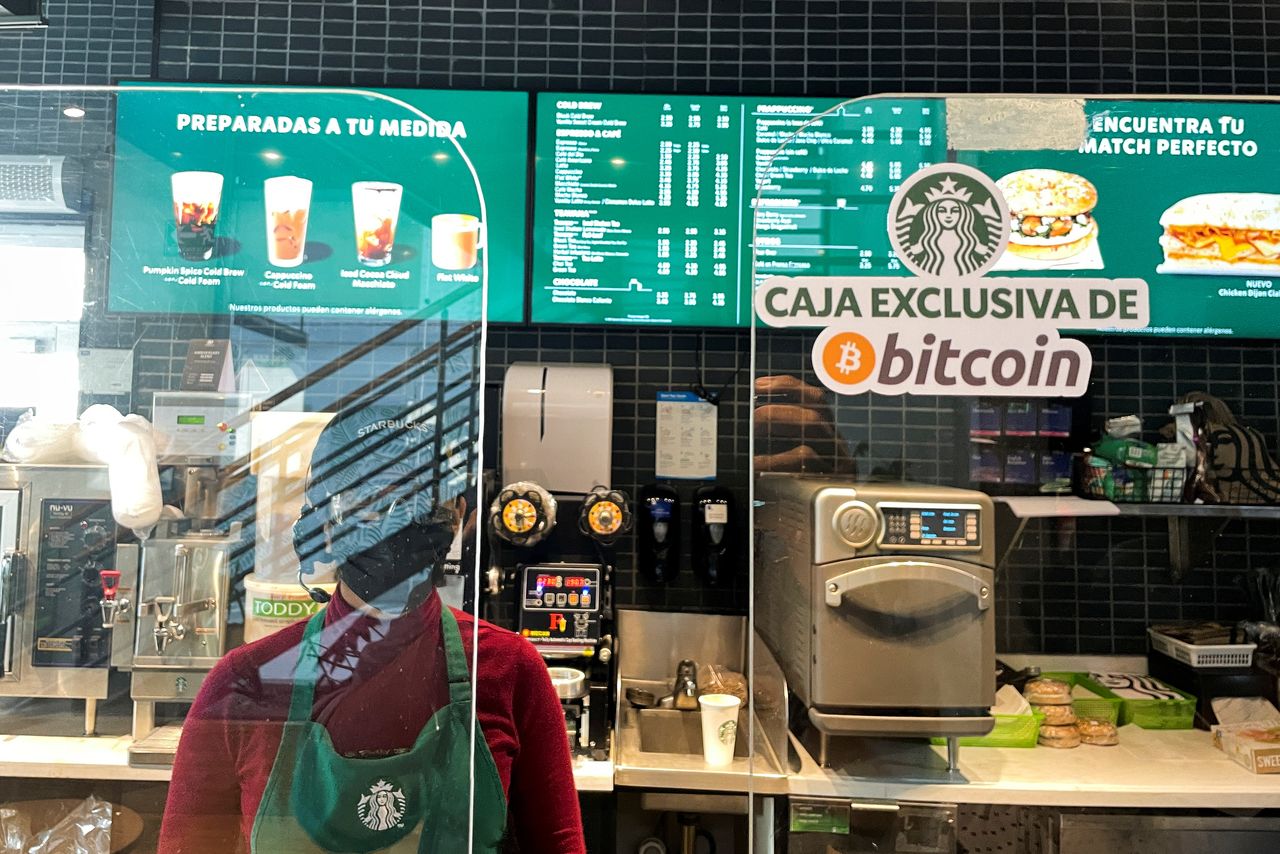 FILE PHOTO: A sign reads: "Exclusive Bitcoin register" in a Starbucks store where the cryptocurrency is accepted as a payment method, in San Salvador, El Salvador September 7, 2021. REUTERS/Jose Cabezas

NEW YORK (Reuters) -Volatility in bitcoin eased on Wednesday, a day after El Salvador adopted the crypto asset as legal tender https://www.reuters.com/business/finance/el-salvador-leads-world-into-cryptocurrency-bitcoin-legal-tender-2021-09-07, but the threat of a U.S. lawsuit against crypto exchange Coinbase https://www.reuters.com/technology/sec-threatens-sue-coinbase-over-crypto-lending-programme-2021-09-08 Global Inc underscored the rocky road ahead for cryptocurrencies.

The Securities and Exchange Commission issued Coinbase with a Wells notice, indicating the U.S. regulator will sue if the crypto exchange goes ahead with the launch of its interest-bearing "Lend" product for crypto assets.

SEC Chair Gary Gensler has called the crypto universe a "Wild West" that is riddled with fraud and investor risk.

Coinbase said it would delay the launch until at least October. Shares of Coinbase closed down 3.2% at $258.20.

Coinbase is not the only cryptocurrency platform to come under regulatory scrutiny. Several states have cracked down on BlockFi.

It would be a mistake to view the SEC's scrutiny as isolated to Coinbase, which happens to be in the spotlight, said Cowen & Co, a unit of financial services firm Cowen Inc, in a note to investors.

"This is part of a broader regulatory pushback on crypto," said analyst Jaret Seiberg. "As we have long argued, crypto should expect to be regulated the same as the traditional product it is trying to replicate or replace."

Trading in bitcoin was less hectic after the cryptocurrency suffered its heaviest losses in 2-1/2 months on Tuesday, when it hit a near four-month high of $52,956 before ending the day down 11.1%, its largest percentage drop since June 2.

At one point on Tuesday, the digital currency fell as much as 18.6%, wiping out more than $180 billion in market value.

While a historic day for bitcoin as El Salvador became the first country to make the digital currency legal tender, Tuesday proved a bumpy start.

Technological glitches hampered its use while street protests by mistrustful citizens broke out in the Central American country.

Analysts said the move by El Salvador showed crypto currencies are here to stay but as with any innovation, they will suffer birthing pains as the currency's volatility must be resolved.

Bitcoin has been pitched to a largely unbanked population in El Salvador as an effective savings vehicle and a store of value for users, said Ganesh Viswanath-Natraj, assistant professor of finance at Warwick Business School in Britain.

Citing volatility in crypto markets, Robinhood Markets Inc said on Wednesday it would roll out crypto recurring investments, allowing customers to buy digital coins commission-free and with as little as $1 on a schedule of their choice.

(Reporting by Herbert Lash in New YorkAdditional reporting by Jamie McGeever in New York, Hideyuki Sano and Anushka Trivedi in Tokyo and Noel Randewich in San FranciscoEditing by Nick Zieminski and Matthew Lewis)