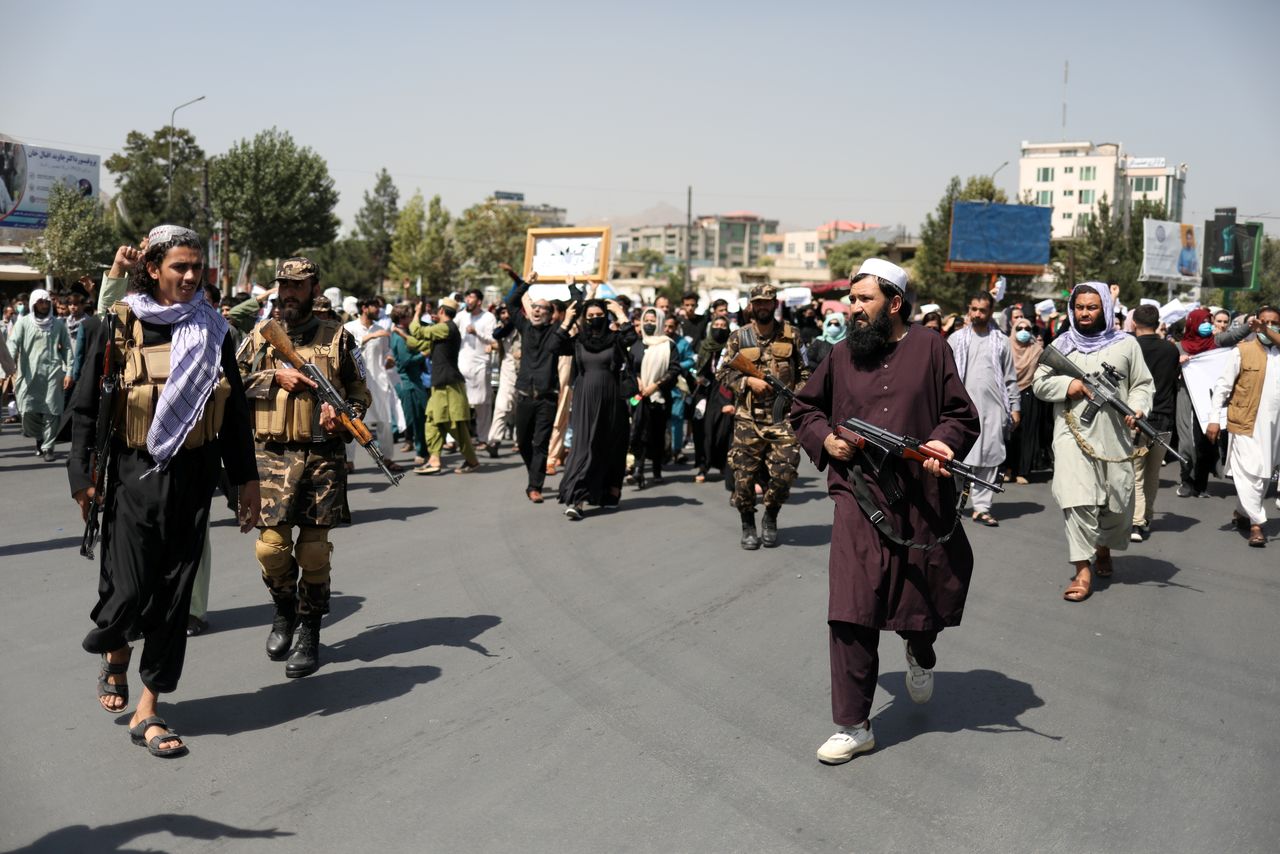 (Reuters) - Foreign countries greeted the makeup of the new government in Afghanistan with caution and dismay on Wednesday after the Taliban appointed hardline veteran figures to an all-male cabinet, including several with a U.S. bounty on their heads.

As the newly appointed ministers and their deputies set to work after they were named late on Tuesday, acting Premier Mohammad Hasan Akhund urged former officials who fled Afghanistan to return, saying their safety would be guaranteed.

"We have suffered heavy losses for this historic moment and the era of bloodshed in Afghanistan is over," he told Al Jazeera.

Tens of thousands of people left after the Taliban seized power in mid-August following a lightning military campaign, many of them professionals fearing reprisals because of their association with the Western-backed government.

In Kabul, dozens of women took to the streets again to demand representation in the new administration and for their rights to be protected.

More broadly, people urged the leadership to revive the Afghan economy, which faces steep inflation, food shortages exacerbated by drought and the prospect of international aid being slashed as countries distance themselves from the Taliban.

The United States underscored its wariness on Wednesday. "This is a caretaker Cabinet," White House spokeswoman Jen Psaki told reporters. "No one in this administration, not the president nor anyone on the national security team, would suggest that the Taliban are respected and valued members of the global community."

The Islamist militant movement swept to power in a victory hastened by the withdrawal of U.S. military support to Afghan government forces.

The Taliban's announcement of a new government on Tuesday was widely seen as a signal they were not looking to broaden their base and present a more tolerant face to the world.

Analysts said the make-up of the cabinet https://www.reuters.com/world/asia-pacific/taliban-choices-new-cabinet-could-hamper-recognition-by-west-2021-09-08 could hamper recognition by Western governments.

The Taliban has promised to respect people's rights and not seek vendettas, but it has been criticised for its heavy-handed response to protests and its part in a chaotic evacuation of thousands of people from Kabul airport.

U.S. Secretary of State Antony Blinken said Washington was assessing https://www.reuters.com/world/blinken-calls-taliban-allow-charter-flights-take-off-2021-09-08 the Cabinet announcement. "But despite professing that a new government would be inclusive, the announced list of names consists exclusively of individuals who are members of the Taliban or their close associates, and no women," he said during a visit to a U.S. air base in Germany that has been a transit point for evacuees from Afghanistan.

The European Union voiced its disapproval https://www.reuters.com/world/eu-ready-continue-afghanistan-aid-watching-new-government-2021-09-08 at the appointments, but said it was ready to continue humanitarian assistance. Longer-term aid would depend on the Taliban upholding basic freedoms.

The new acting Cabinet includes former detainees of the U.S. military prison at Guantanamo Bay, while the interior minister, Sirajuddin Haqqani, is wanted by the United States on terrorism charges and carries a reward of $10 million.

His uncle, with a bounty of $5 million, is the minister for refugees and repatriation.

The last time the Taliban ruled Afghanistan, from 1996 to 2001, women were banned from work and girls from school. The group carried out public executions and its religious police enforced a strict interpretation of Islamic law.

Taliban leaders have vowed to respect people's rights, including those of women, in accordance with sharia, but those who have won greater freedoms over the past two decades are worried about losing them.

Alison Davidian, deputy head of UN Women in Afghanistan, said some women were being prevented from leaving home without a male relative or were forced to stop work. The activity "has generated incredible fear https://www.reuters.com/world/asia-pacific/incredible-fear-among-women-across-afghanistan-un-official-2021-09-08. And this fear is palpable across the country," Davidian, speaking from Kabul, told reporters in New York.

In an interview with Australia's SBS News, a senior Taliban official said women would not be allowed to play cricket - a popular sport in Afghanistan - or possibly any other sport because it was "not necessary" and their bodies might be exposed.

Australia's cricket board said it will scrap a planned test https://www.nasdaq.com/articles/cricket-australia-board-will-cancel-afghanistan-test-if-womens-cricket-banned-2021-09-09 match against the Afghanistan men's team if the Asian country's Taliban rulers do not allow women to play the sport.

In Kabul, a group of women bearing signs reading: "A Cabinet without women is a failure," held another protest in the Pul-e Surkh area of the city. Larger demonstrations on Tuesday were broken up when Taliban gunmen fired warning shots https://www.reuters.com/world/asia-pacific/afghan-protests-persist-posing-problem-new-taliban-government-2021-09-07 into the air.

"The Cabinet was announced and there were no women in the Cabinet. And some journalists who came to cover the protest were all arrested and taken to the police station," said a woman in a video shared on social media.

A statement from the new Taliban Interior Ministry said that in order to avoid disturbances and security problems, anyone holding a demonstration should apply for clearance 24 hours beforehand.

For many Afghans, more pressing than the composition of the Cabinet was the economic fallout of the chaos triggered by the Taliban's conquest.

Shukrullah Khan, manager of a restaurant at Qargha Lake, a popular local resort near Kabul, said business had slumped to next to nothing. "The banks are closed, there's no jobs, people no longer spend money. Where does the money come from so that people can have fun here?" he said.

Ousted President Ashraf Ghani, who fled Kabul as Taliban forces reached its outskirts, apologised on Wednesday https://www.reuters.com/world/asia-pacific/exiled-ghani-apologizes-afghan-people-2021-09-08 for the abrupt fall of his government, but again denied he had taken millions of dollars with him.