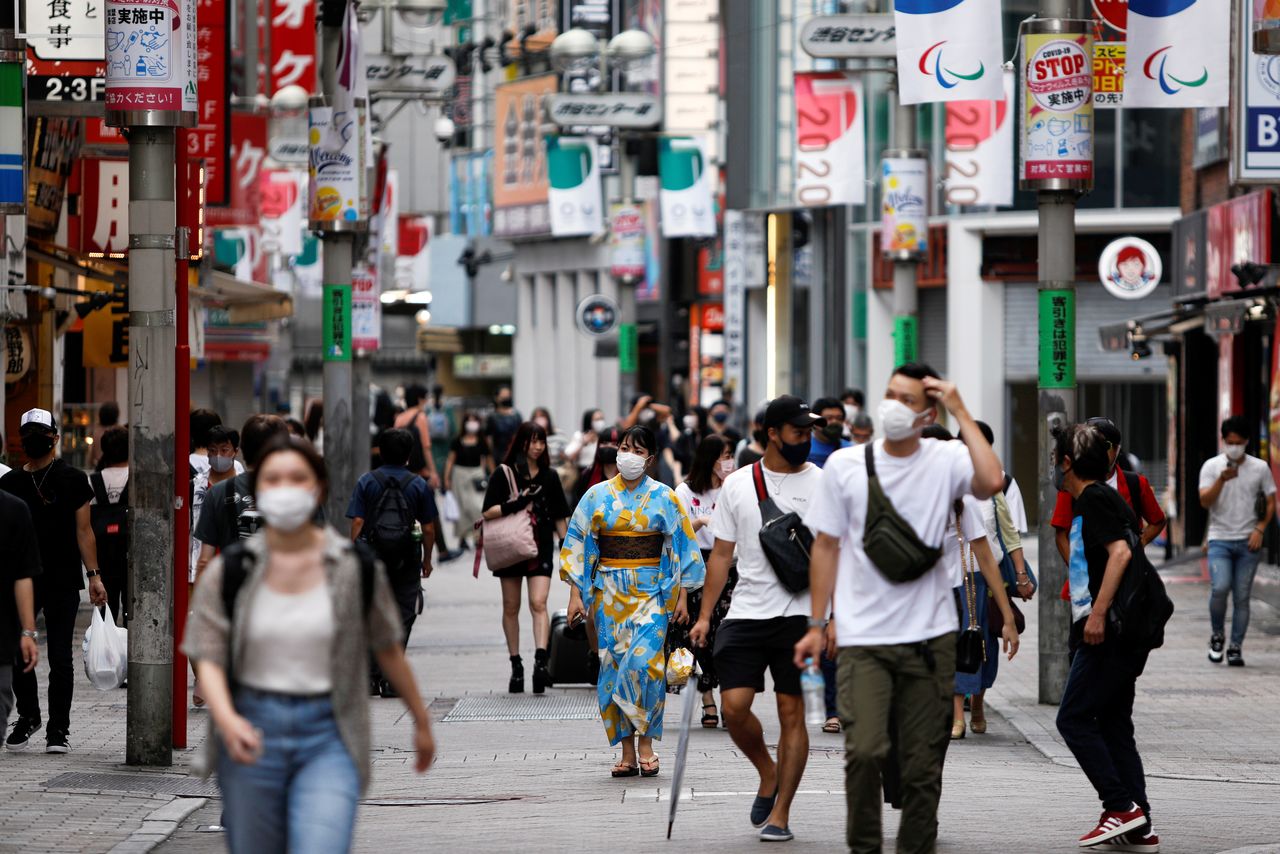 People walk in Shibuya shopping area, during a state of emergency amid the coronavirus disease (COVID-19) outbreak in Tokyo, Japan August 29, 2021. REUTERS/Androniki Christodoulou

TOKYO (Reuters) -Japan extended emergency COVID-19 restrictions on Thursday in Tokyo and other regions until the end of this month to curb infections and prevent hospitals being overwhelmed.

Announcing the extension, ratified earlier by an advisory panel, Prime Minister Yoshihide Suga said it was needed to shore up a medical system still stretched by serious cases even though new infections were falling and vaccinations were rising.

"Inoculation of all those who wish to be vaccinated will be completed in October or November," Suga told reporters. "And from then, we will be able to ease restrictions by using proof of vaccination or testing results."

Japan has been struggling with a fifth wave of the virus and last month extended its long-running curbs until Sept. 12 to cover about 80% of its population.

The number of severe cases and the strain on the medical system have not eased sufficiently in Tokyo and surrounding areas to allow restrictions to be lifted. The measures will now stretch until Sept. 30, including for Osaka in the west.

Japan's emergency curbs have centred on asking restaurants to close early and refrain from serving alcohol. Residents are being urged to work from home as much as possible and refrain from travel.

"I believe we're starting to see results, but it's still too early to lower our guard," Health Minister Norihisa Tamura said.

Looking back on his time in office, Suga told a news conference that not having been able to secure enough hospital beds was one major regret.

In a surprise announcement last week, Suga said he was stepping down, ending a one-year term as prime minister that has seen his support crumble as COVID-19 surged.

"My days in office have been absorbed with the battle against the coronavirus ... I had a tough time securing enough medical care. That is one big point of reflection," he said.

With hospital beds filled to or nearing capacity, many people have been forced to convalesce at home, with some dying before they can get treatment.

The Nikkei newspaper reported that the government was moving towards easing international entry restrictions by reducing quarantine times for vaccinated travelers. The move has been urged by Keidanren, Japan's main business lobby, and foreign chambers of commerce.

"We welcome any proposal to re-open Japan's borders to business travel, as part of a science-based approach to preserving public health," Christopher LaFleur, special advisor to the American Chamber of Commerce in Japan, said.

LaFleur said many of Japan's top trade partners allow vaccinated travelers to enter freely and mandate quarantines of 10 days for those without shots, and that it was "reasonable that Japan adopt the same policy."

Local media have reported that the government may allow restaurants to resume regular business hours and alcohol sales as the vaccination push nears completion in October and November.

About half of the population has now been fully vaccinated in Japan.

Tokyo's new daily coronavirus infections totaled 1,834 on Wednesday. Japan has reported around 1.6 million cases and 16,436 deaths but the death rate has declined in the latest outbreak. The 1% fatality rate compares with 1.6% in the United States and 1.9% in Britain.

Shigeru Omi, Japan's chief health advisor, said on Wednesday the pandemic fight was shifting to focus more on the threat of new viral variants or a possible decline in the effectiveness of vaccines.