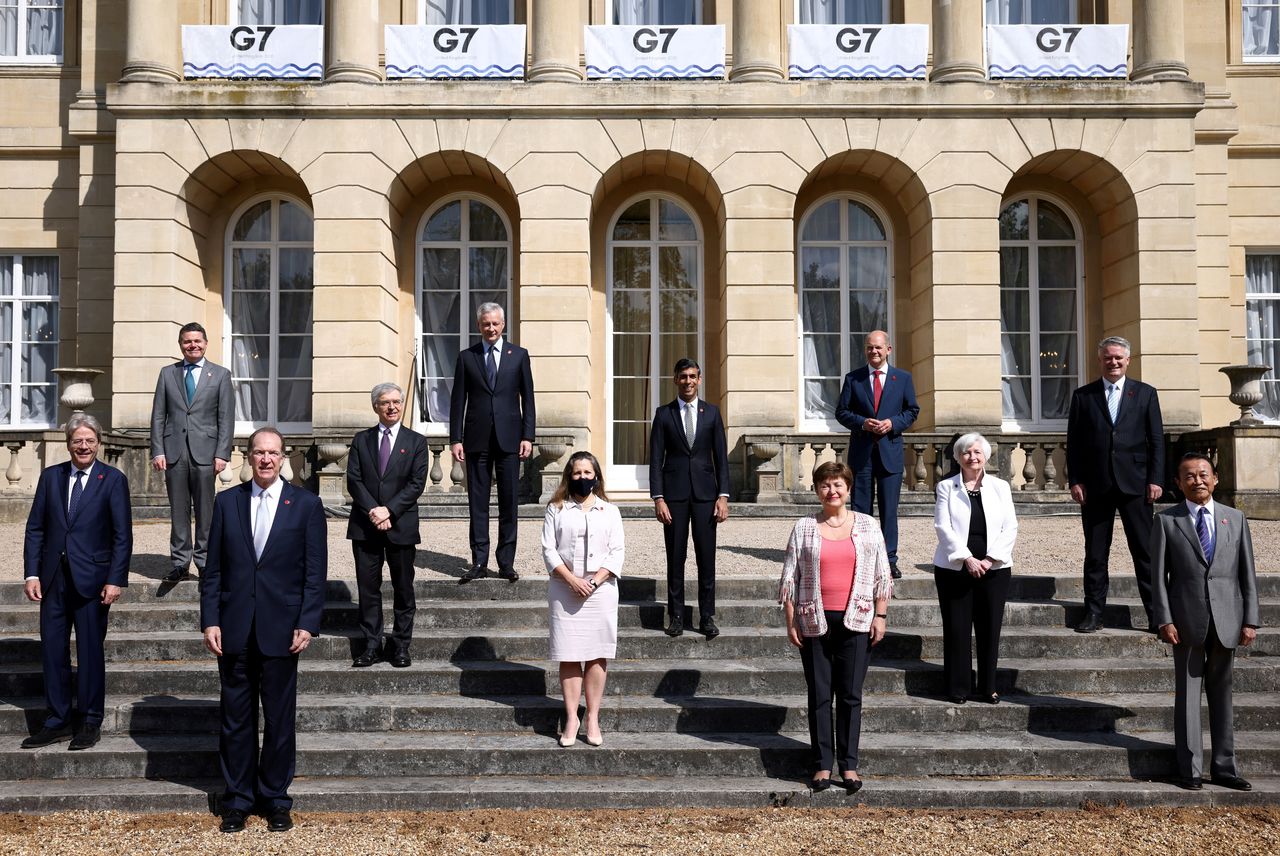 LONDON (Reuters) -Finance ministers from the Group of Seven rich nations said on Thursday they had to make more headway on the small print of a reform of global corporate tax rules in time for a summit of world leaders in October.

Britain's Rishi Sunak said he urged his G7 peers during a virtual meeting to make continued technical progress on the reforms, and U.S. Treasury Secretary Janet Yellen underscored the need to swiftly implement the new rules.

More than 130 countries agreed this summer to work out new rules on where companies are taxed, to adopt a tax rate of at least 15%, and to drop national digital services taxes in favour of the new taxing rights.

Diplomats are now pushing for a deal at the next Group of 20 summit in October on the technical parameters for the reform.

"I said the G7 must unite to play a leadership role to aim for an effective agreement in October," Japanese Finance Minister Taro Aso told reporters.

Yellen noted the agreement was backed by 134 countries representing more than 90% of the world’s GDP, and said the new international tax system would help governments invest in their workers and economies while levelling the playing field on which U.S. companies compete, according to a statement by her office.

Sunak said on Twitter that he also called on the G7 to give support for vulnerable countries through the International Monetary Fund's Special Drawing Rights (SDRs), or emergency reserves, ahead of discussions between finance ministers and central bankers in October.

The Treasury said Yellen also called for continued G7 efforts to enhance support for low-income countries hit hard by the COVID-19 pandemic and its economic fall-out.

Yellen urged major economies to lend their SDRs to further support vulnerable countries, Treasury said, but gave no details about the United States' own plans.

IMF chief Kristalina Georgieva, writing on Twitter, thanked Sunak and Britain for what she called "remarkable progress on ways to amplify the benefits of the new Special Drawing Rights allocation for countries in need" during the G7 meeting.

A source familiar with the discussions said G7 members voiced support for both the IMF's existing Poverty Reduction and Growth Trust and a new vehicle proposed by Georgieva, the Resilience and Sustainability Trust, to allow richer IMF members to donate or loan their reserves to more vulnerable countries.

That spells good news for the IMF, given that some G7 countries had initially expressed reservations about the new trust, which could provide aid to more than just the poorest countries, and would cover broader spending, including efforts to combat climate change.

A G7 source said Thursday's meeting also addressed how to deal with the new Taliban government in Afghanistan.

"We don't want to see a humanitarian catastrophe in Afghanistan. There must not be a famine in Afghanistan," the source said, speaking on condition of anonymity.

Britain holds the rotating presidency of the G7, which also comprises Canada, France, Germany, Italy, Japan and the United States. Germany will assume the G7 presidency next year.