After the 'bazooka', Bank of Japan dismantles the work of its radical chief 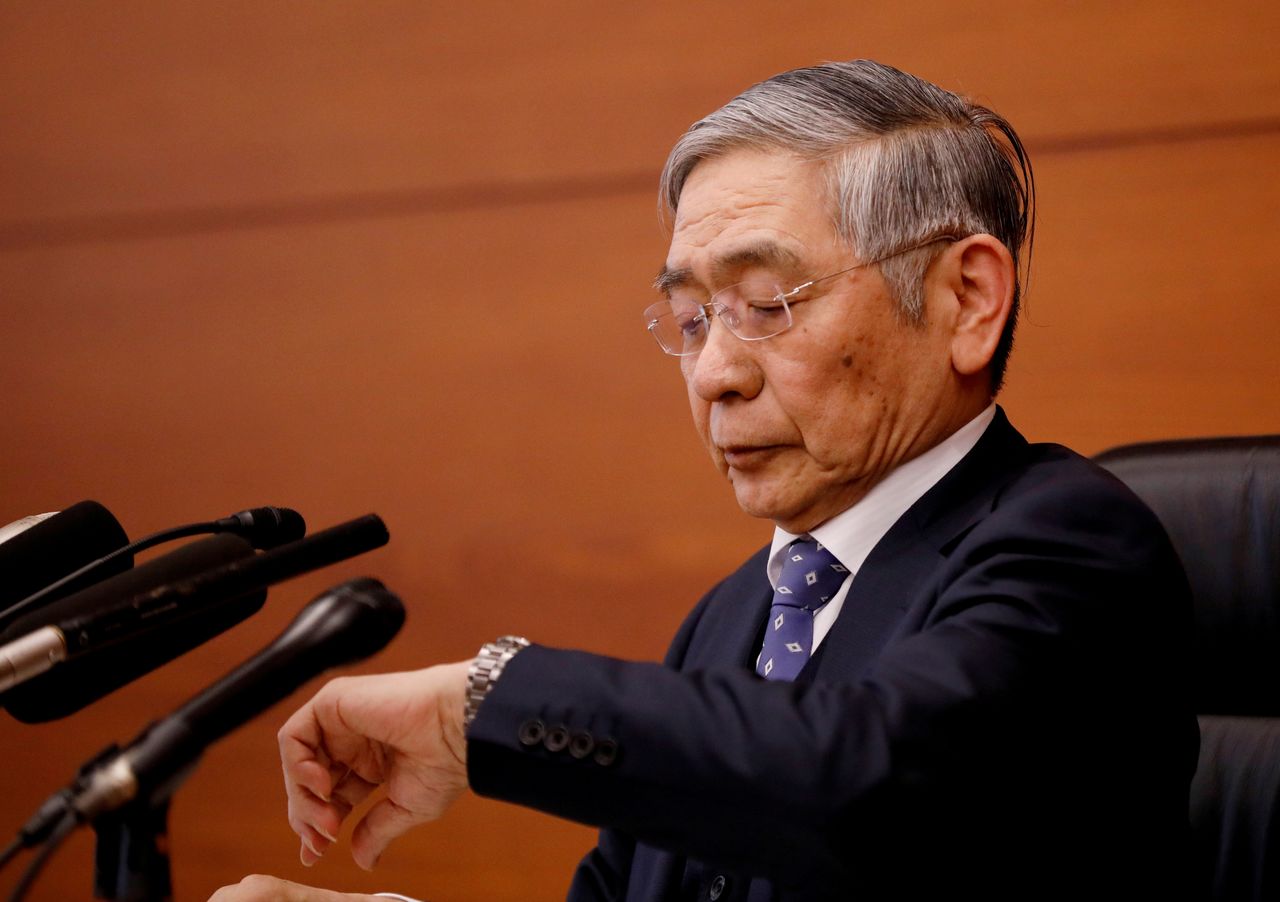 TOKYO (Reuters) - After years of shock-and-awe stimulus, the Bank of Japan is quietly rolling back radical policies introduced by its bold chief Haruhiko Kuroda and pioneering controversial new measures that blur the lines between central banking and politics.

Amamiya and his top lieutenant Shinichi Uchida have worked behind the scenes to make Kuroda's complicated policy framework--a product of years of unsuccessful attempts to revive stagnant consumer prices--more manageable, and eventually return Japan to more normal interest rate settings, even as the economy struggles with the pandemic.

The BOJ's dwindling monetary options mean the two ambitious technocrats are instead pushing the bank into schemes bordering on industrial policy, such as those designed to encourage bank sector consolidation and green finance.

The most decisive and latest swing in policy direction, though not formally communicated, came in the BOJ's March meeting when it announced it would no longer commit to a fixed programme of risky asset purchases, an inconspicuous sign it was slowing its monetary support.

"With the March move, the BOJ laid the groundwork for an eventual policy normalisation," said a close associate of Kuroda with knowledge on the central bank's policy deliberations.

This account of events around the March meeting is based on interviews with more than two dozen incumbent and former central bank and government officials, ruling and opposition lawmakers and academics with direct or indirect knowledge of monetary policy decisions. The BOJ declined to comment for the story and declined a request by Reuters for interviews with Amamiya and Uchida.

"The current stimulus can't stay forever and must be rolled back at some point," said a former BOJ policymaker who was involved in the March decision. "That's always in the mind of career central bankers."

Officially, the change in March was aimed at extending the lifespan of stimulus policies championed by Kuroda, the man once seen as a bold visionary who could shock the economy out of deflation with his "bazooka" asset-buying programme.

However, insiders say there was another motive: to pave the way for an eventual retreat from these very policies.

While that intention was hidden from markets, it would mark a symbolic end to Kuroda's bold experiment based on the text-book theory that forceful monetary action and communication can influence public price expectations and drive inflation higher.

"It's as if the BOJ is trying to prove itself by doing something new all the time," said former BOJ deputy governor Hirohide Yamaguchi. "What's become clear is that the BOJ can't affect and mould public mindset like jelly."

Once seen as a symbol of decisive monetary easing, Kuroda appears to be taking a back seat with recent BOJ forecasts predicting inflation will miss the bank's elusive 2% target well beyond his term ending in 2023.

He has also acknowledged the need to address the strains ultra-low interest rates have on financial institutions.

Only half of his six speeches so far this year were about monetary policy, in contrast to his first year as governor in 2013, when all but two of his 15 speeches focused on monetary policy.

With his emphatic advocacy for 2% inflation fading, Kuroda is writing a memoir touching on topics ranging from encounters with various overseas policymakers, to pizza he ate during a business trip to Naples, according to his associates.

"He probably enjoys reading books on philosophy more than chairing board meetings," one said jokingly of the bookish governor.

The planning for an eventual exit from Kuroda-era stimulus remains closely held and has not been part of the bank's official communication.

But a gradual retreat has been under way since 2016, when the BOJ replaced a pledge to pump money at a set pace with a policy controlling interest rates.

A fan of classical music known as "Mr. BOJ" for drafting numerous monetary easing schemes, Amamiya has since early last year been orchestrating a more concerted rollback of the very stimulus he helped Kuroda create.

Details would be worked out by Uchida, who, like Amamiya, has been groomed to move up the BOJ ranks armed with "a wealth of ideas and an extremely sharp mind," say people who have worked with or under him.

The challenge was to mitigate the rising cost of prolonged easing to financial institutions, without giving markets the impression the BOJ was headed for a sharp exit from easy policy.

Amamiya gave the go-ahead to a controversial scheme unveiled in November, under which the BOJ pays 0.1% interest to regional lenders that boost profits or consolidate.

It was a nod to complaints from regional banks the BOJ's negative rate policy was narrowing already thin margins, and reflected concern among policymakers that chronically low rates could destabilise the banking sector.

"It's essentially a scheme to compensate regional banks for the blow from negative rates," one source said.

By mid-2020, the bureaucrats were also debating ways to address what has been their biggest headache: the BOJ's huge holdings of exchange-traded funds (ETF) that exposed its balance sheet to potential losses from market swings.

For years, the government relied on the BOJ to set a price floor for Japan's stock market, discouraging central bankers from ditching a pledge to purchase ETFs at a set pace.

But as stocks kept rising, the political mood shifted. Lawmakers began to complain about the distortion the BOJ's huge presence was causing in the share market.

Last year, an opportunity arose: after ramping up buying to ease market turbulence caused by the pandemic, the BOJ began to scale back purchases and found markets taking the tapering in stride.

That convinced BOJ officials the bank could terminate buying without upending markets, as long as it gave assurances that it would still intervene in times of crisis.

"The BOJ made an absolutely right decision by starting with an ETF taper in heading toward an exit from easy policy," said former trade minister and opposition heavyweight Banri Kaieda, who was once a vocal proponent of aggressive monetary easing.

The next step would be to raise interest rates--the first hike since 2007--and mop up excess cash from the market.

The March move laid the groundwork for that step. But a rate hike could take years due to subdued inflation and will likely be left to Kuroda's successor, sources say.

"If the BOJ is lucky, the debate (on raising rates) could begin from around 2023," former BOJ executive Eiji Maeda told Reuters.

"But this won't be policy normalisation. It will merely be a shift away from an extraordinary stimulus towards a more sustainable monetary easing," said Maeda, who was involved in the drafting of the current stimulus.

Selling the BOJ's huge ETF holdings will be even tougher. While bureaucrats have internally brainstormed ideas, there is no consensus on when and how this could be done, sources say.

To be sure, policymakers both inside and outside the BOJ say stimulus of some kind is still needed to support the struggling economy, and that is unlikely to change when Suga steps down.

That would leave the central bank in a holding pattern, even as its global peers eye exits from crisis-mode stimulus, and force the BOJ to use unconventional initiatives outside the monetary toolbox to juice the economy.

Those include a scheme unveiled in July, which offers cheap funds to banks that lend to activities aimed at battling climate change.

That plan meshes with Suga's pledge to make Japan carbon-neutral by 2050, a sign the BOJ is controversially aligning its policy with government priorities.

Such a proposal is typical of Amamiya, who knows which way the political wind is blowing and can adapt flexibly to shifts in popular opinion, say people who have worked with him.

"We ought to avoid intervening in asset allocation as much as possible. But there's no simple, ever-lasting line you can draw on what's acceptable or not," Amamiya said in July.

Such forays into quasi-government policy highlight the BOJ's current lack of conventional policy ammunition and take it into uncharted waters politically.

Miyako Suda, a former BOJ board member, said many of the bank's new programmes leave it with less autonomy over when to withdraw stimulus than they have with conventional policy tools.

"It's no longer a decision the BOJ alone can make," she said. "When the government and the BOJ are working side by side heading for the same direction, things go fine - the problem is when the two part ways."