Tennis-Raducanu can become one of world's most marketable athletes 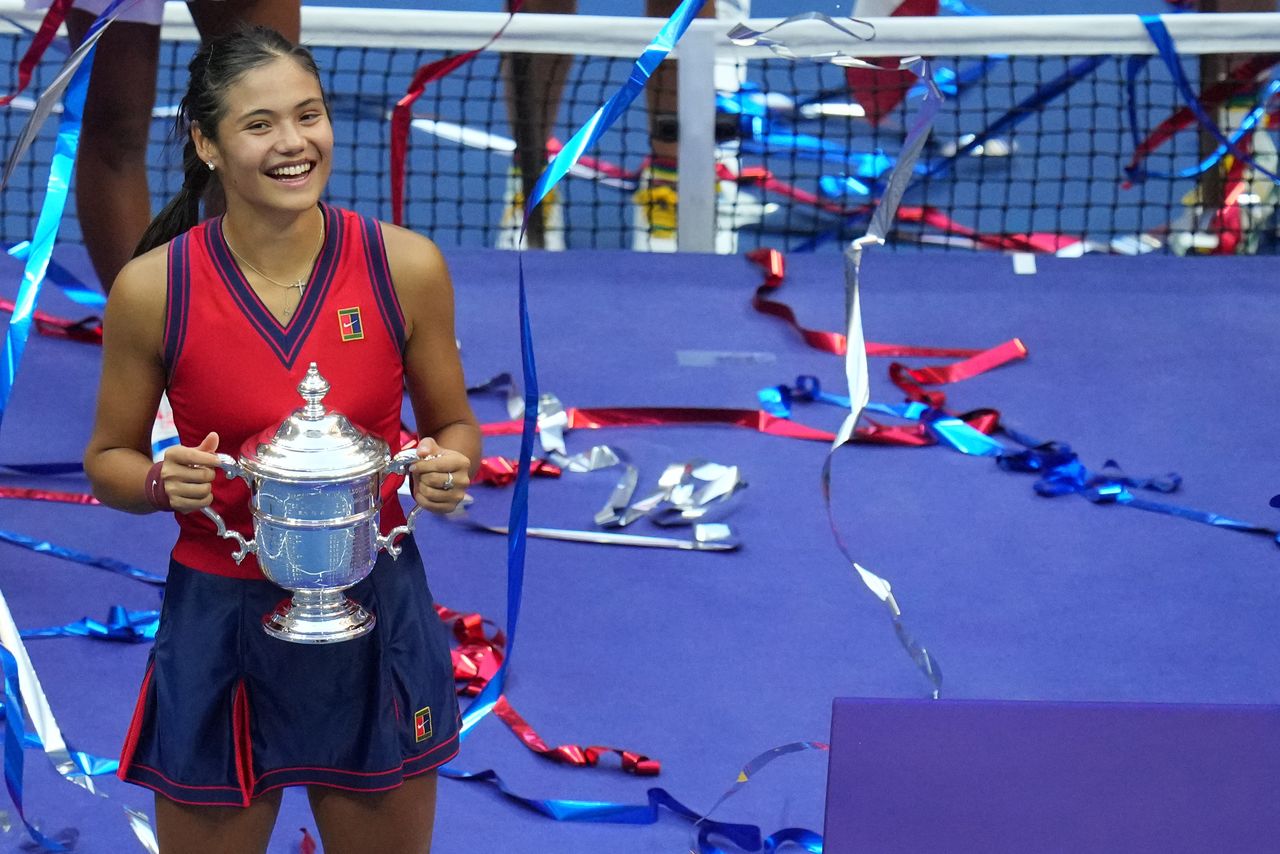 LONDON (Reuters) - Emma Raducanu's astonishing U.S. Open triumph could lead to a pot of gold worth around 20 million pounds ($27.7 million) over the next two years and that may be just the start, according to sports marketing experts.

The 18-year-old Briton was almost unheard before reaching the fourth round at this year's Wimbledon, having earned around $40,000 since her senior debut three years ago.

The $2.5 million she picked up in prize money for beating fellow teenager Leylah Fernandez in a final that captivated the sporting world may soon seem like loose change.

Raducanu's mixed Romanian-Chinese heritage, a stunning game, and engaging personality make her "brand gold" according to one sports marketing expert.

She is already a cover girl for British Vogue's October edition and major global brands in everything from fashion to cars and jewellery will be queuing at the doors of IMG, her management company.

"There is no limit in what she can achieve on the court," Tim Lopez, Director at sports marketing firm CSM, told Reuters on Monday.

"She's hugely in demand already but to follow that up with continued success in the majors in tennis will see her rapidly become one of the most marketable athletes on the planet."

With its global reach and equal exposure, tennis offers a road to riches for top female players with Japan's Naomi Osaka earning $55 million, not including prize money, in the past year, according to Forbes magazine.

Of the world's 10 highest-paid sportswomen, nine are tennis players.

"If you use that as a yardstick not just because of their career trajectory but also their shared appeal and that they are both engaging and from mixed heritage backgrounds," he said.

"That's a huge benefit from a brand perspective, from an eyeballs point of view there is no bigger market to tap into."

Raducanu's rise from obscurity to having her face plastered on Times Square billboards will have the sports clothing brands vying for her signature. After Osaka won back-to-back Grand Slam titles in 2018 and 2019, Nike reportedly paid $10 million to take her from rivals Adidas.

Raducanu's appeal goes beyond the court, according to Conrad Wiacek, head of sport analysis at GlobalData.

"Her victory takes her way beyond tennis and sport in terms of marketability," he told Reuters.

"One of the most impressive things for me was her message in Mandarin for the Chinese audience because the major issue western sports stars have in breaking China is the language barrier.

"The sky is the limit as any western brand positioning itself in China would be looking at her as an ambassador."

Wiacek expects Raducanu's Nike sponsorship deal to be raised significantly and other endorsements will earn her about $10 million over the next two years.

"With her Chinese and eastern Europe heritage as well as Britain, that puts her in a different stratosphere to other athletes," he said. "I've seen it being thrown around that she's a potential billion dollar athlete. That's a long way away.

"That's based on consistency but just on the next 12 months I would say $5 million would be a realistic number. Ultimately the barometer for how commercially successful she will be will depend on how successful she is on the tennis court."

Raducanu is represented by super-agent Max Eisenbud who helped turn Russian Maria Sharapova into the highest-earning female athlete after she won Wimbledon aged 17, with off-court career earnings of around $320 million.

However, the pitfalls in professional tennis are numerous with Osaka, another IMG athlete, struggling to cope with the sudden fame and fortune.

Lopez says striking the right balance between on-court and off-court activities will be a key factor in Raducanu achieving her full potential.

"People need to give the girl a chance to consolidate what she's done and not to heap too much pressure on too soon," he said.

"Focus on the mental wellbeing, then the sporting wellbeing and the financial rewards will certainly follow."