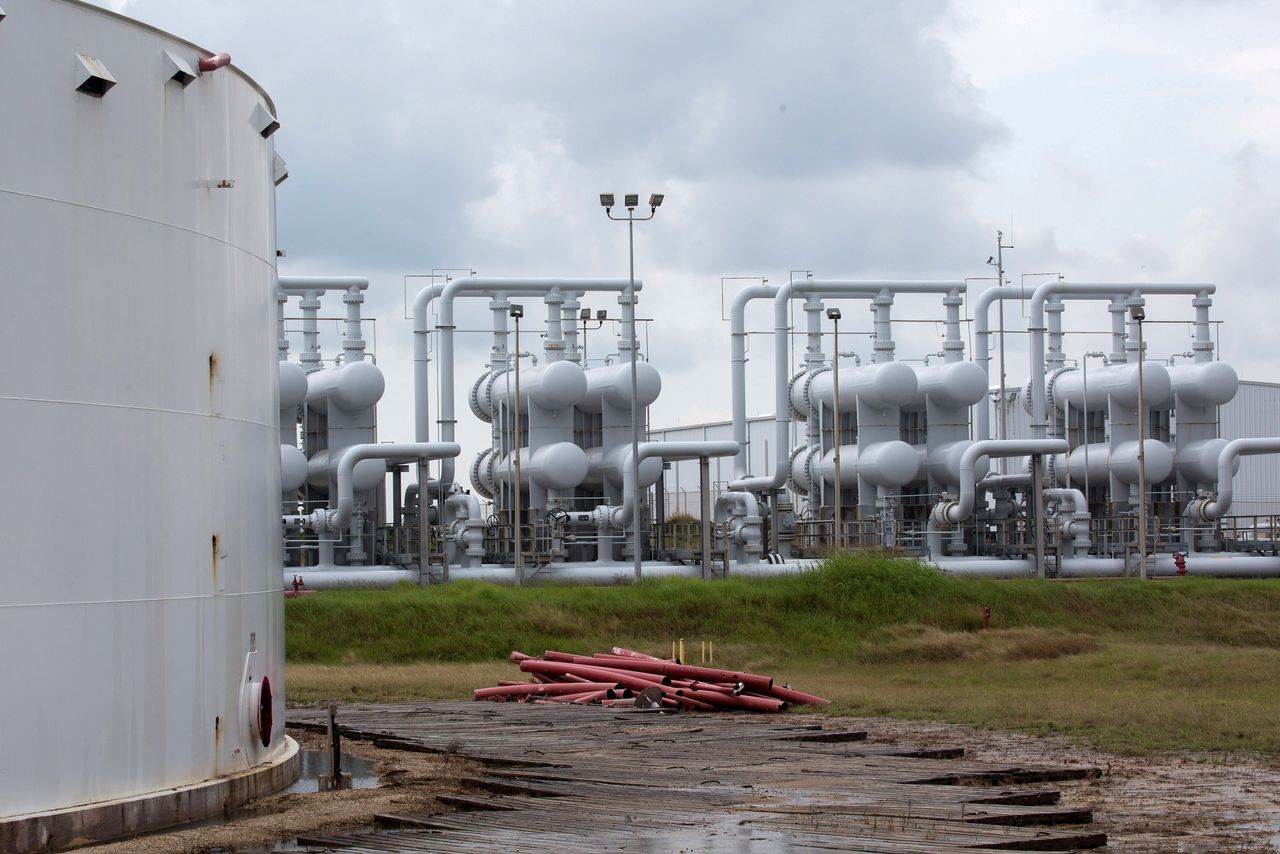 FILE PHOTO: An oil storage tank and crude oil pipeline equipment is seen during a tour by the Department of Energy at the Strategic Petroleum Reserve in Freeport, Texas, U.S. June 9, 2016. REUTERS/Richard Carson

More than 39% of the U.S. Gulf of Mexico's production of crude and natural gas remained shut on Tuesday, the regulator Bureau of Safety and Environmental Enforcement (BSEE) said. Nicholas made landfall in Texas on Monday and was to reach Louisiana on Wednesday, bringing more floods and heavy rains to the Gulf's oil facilities.

"The Gulf situation is not resolving itself quickly," said John Kilduff, partner at Again Capital LLC in New York.

Royal Dutch Shell shut production at an offshore oil platform due to heavy winds. Vessel traffic at some energy hubs was halted due to difficult weather conditions.

"There's going to be import-export issues because Houston is in a semi-flood zone," said Bob Yawger, director of energy futures at Mizuho.

Nicholas is the second major storm to threaten the U.S. Gulf region in recent weeks, bringing heavy rains to the Deep South and causing power outages. Still, most Texas refineries were operating normally and Texas utilities were restoring power to customers who suffered outages.

The Colonial pipeline, the largest U.S. fuel pipeline, partially resumed operations after shutting due to a power outage early in the day.

Oil turned negative during the session after new data from the U.S. Labor Department showed inflation cooling and as worries receded about the storm's impact on the energy sector.

After three months of declining global oil demand, rollouts of COVID-19 vaccines should rekindle appetite for oil that was suppressed by pandemic restrictions, especially in Asia, the International Energy Agency (IEA) said on Tuesday.

The IEA sees a demand rebound of 1.6 million barrels per day (bpd) in October and continued growth until the end of the year.

These forecasts are below those of the Organization of the Petroleum Exporting Countries (OPEC), which expects demand to grow by about 5.96 million bpd this year and 4.15 million bpd next year.

Protesters blocked an oil tanker from loading at the Libyan terminal of Es Sider on Tuesday, the National Oil Corp's (NOC) media office and an engineer at the port said.