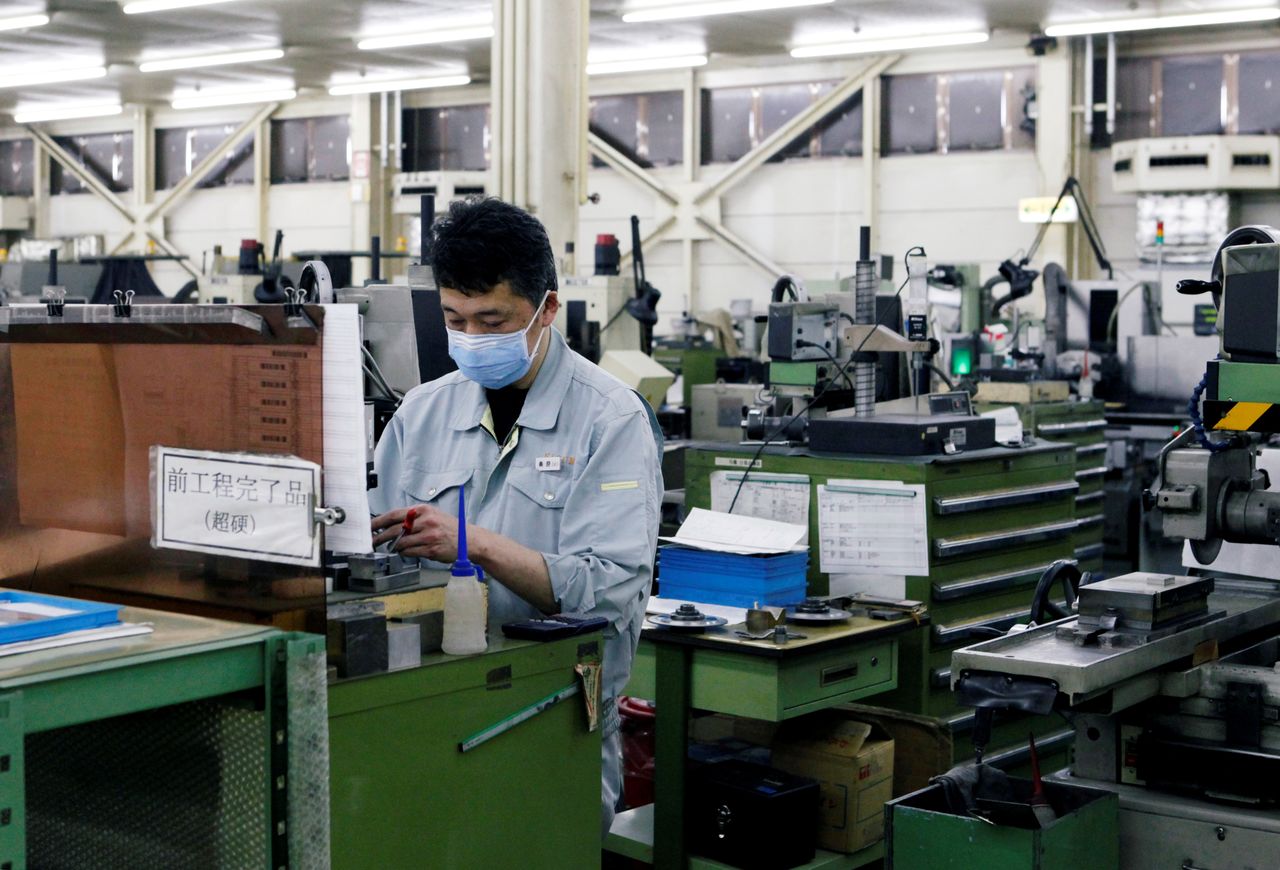 TOKYO (Reuters) - Japanese manufacturers' confidence worsened to a five-month low in September as the fallout from the latest wave of COVID-19 put fresh pressure on the world's third-largest economy, the Reuters Tankan poll showed.

Sentiment among manufacturers fell as export-reliant firms such as carmakers suffered from a global chip shortage, according to the monthly poll, which tracks the Bank of Japan's (BOJ) closely watched tankan quarterly survey next due on Oct. 1.

Confidence among service sector firms contracted but is seen improving again over the next three months, the poll showed.

The bleaker view on current conditions suggests Japan's economic growth may slow in the third quarter after official data last week showed https://www.reuters.com/business/japan-upgrades-q2-gdp-stronger-business-spending-2021-09-08 it expanded an annualised 1.9% in the three months through June, beating expectations.

The poll of 503 big and mid-sized companies between Sept. 1 and 10, of which 264 responded, showed companies are struggling with sluggish demand both at home and abroad as a slowdown in China and emerging markets clouds the outlook.

"Production and sales activity can't be carried out due to stagnating parts supply," a manager at a machinery maker wrote in the poll.

"The semiconductor shortage and coronavirus lockdowns in Southeast Asia are having a major impact."

The Reuters Tankan sentiment index for manufacturers slipped to 18 from a more than three-and-half-year high of 33 in August, to hit its lowest since April. The service index dropped to minus 2 from 5 the previous month, the poll showed. (For a detailed table of the results, click)

The BOJ's own "tankan" business survey released in July showed https://www.reuters.com/business/japan-business-mood-improves-q2-2-12-year-high-tankan-2021-07-01 big manufacturers' business confidence was expected to stay positive in the third quarter after hitting a two-and-half-year high in the second quarter.

In the Reuters Tankan, firms reported the deepening impact of a global chip shortage, as activities and broader demand continued to be hobbled by the health crisis, with some saying they were suffering from higher raw material prices.

"The impact of rising raw material prices is starting to be felt, while the Chinese and U.S. economies are seeing a slowdown," a manager at a chemical maker wrote in the survey.

The Reuters Tankan poll showed manufacturers' business confidence was seen largely stable at 19 in December, while that of service sector firms was expected to rise to 7.

"There are no reservations coming in for overnight stays and banquets because of the fifth wave of the coronavirus," said a manager at a service sector firm, in a sign of the fragility in private consumption which accounts for more than half of Japan's economy.