HONG KONG (Reuters) - For his last class in Hong Kong in July, liberal studies teacher Fong showed his students calligraphy by the territory's late democratic activist Szeto Wah: "Choose the right path and stick to it." He emigrated to Britain days later.

Fong is one of many teachers that left Hong Kong before the school year began in September, some saying they felt disillusioned and threatened by the authoritarian turn the city has taken since Beijing imposed a stringent national security law in June 2020.

"The day I resigned, I told my school: 'If one day, some students downstairs chant slogans, I would have to call the police to arrest my own students'," said 45-year-old Fong, who asked to be identified by only one name for fear of drawing the attention of authorities. "I could not do that. And I could not hold my tears."

Several principals who spoke to Reuters said teachers were departing this year at about twice the normal rate, leaving some of them scrambling for new recruits.

The Hong Kong Association of Heads of Secondary Schools (HKAHSS) warned the government in July that would cause a "brain drain" that would reduce the quality of education in the city. About 700,000 pupils attend 1,000 or so primary and secondary schools in Hong Kong.

"The education environment and also the atmosphere have changed quite drastically in the past two years," Samuel Cheng, principal at United Christian College - Kowloon East, told Reuters. "People are stirred up by their friends and colleagues who left so I have to help them at least emotionally settle down. I have to stabilise the school."

In response to Reuters' questions, Hong Kong's Education Bureau said teachers might have quit the profession to pursue other jobs or studies, or for other personal reasons, and did not address the issue of a brain drain. It said the national security law was not affecting the education sector or the quality of teaching.

"The allegation by the so-called departing teachers is totally biased and unfounded on evidence," the EDB said in a statement to Reuters. "It is inherently misleading and statistically biased to regard views from these individual teachers as representative of the education professionals in general."

It is impossible to determine how many of the almost 60,000 school teachers in the former British colony left this summer, or plan to leave this year. Figures on teacher employment for this school year collected by the EDB are not yet available.

The Professional Teachers' Union (PTU), which was Hong Kong's biggest union before it disbanded this month, said in May that 40% of teachers it surveyed wanted to leave the education sector.

Some have emigrated, although Hong Kong does not publish information on how many people leave the territory or their occupation.

Britain, Canada and other countries have said tens of thousands of Hongkongers have emigrated in the past year or so, out of a total population of 7.5 million.

One of those was Grace Kwok, a 33-year-old music teacher who moved to Britain in January. She told Reuters some parents complained to her principal after she told pupils that Tian Han, who wrote the lyrics of China's national anthem, "March of the Volunteers," died in prison during Mao Zedong's 1960s Cultural Revolution.

The education system has become a key target of a broader plan by China's leaders to reform Hong Kong's rebellious youth after the often-violent pro-democracy demonstrations of 2019.

Almost 20% of the more than 10,000 people arrested during the protests were of school age. About 100 teachers and staffers from schools were also arrested, according to the city’s education secretary.

In February, Hong Kong introduced new curriculum guidelines ensuring that children as young as six learn more about China and are taught about the national security law, which made any act that Beijing regards as secession, subversion, terrorism or collusion with foreign forces punishable by up to life in prison.

The EDB has replaced the subject of liberal studies - which it introduced in 2009 to increase social involvement and to develop critical thinking - with a smaller module called "citizenship and social development" which focuses on patriotism.

References to the bloody 1989 crackdown on protesters in and around Beijing's Tiananmen Square and the 2014 "Umbrella Movement" protests in Hong Kong have been removed from textbooks seen by Reuters, along with other pro-democracy events.

Hong Kong Chief Executive Carrie Lam said last year that teachers who were "bad apples" needed to be removed from the education system. The EDB told Reuters it received 269 teacher misconduct complaints from June 2019 to December 2020. It did not provide any details of the complaints.

Under pressure from authorities, the PTU officially disbanded earlier this month. The Hong Kong government had already cut ties with the 95,000-strong union, which China’s state media had described as a "poisonous tumour."

The EDB told Reuters that 4% to 5% of teachers in primary and secondary schools dropped out every year for the past four years. It does not have data for the school year just started.

Some principals told Reuters that teacher turnover this summer was much higher than that. Dion Chen, chairman of Hong Kong Direct Subsidy Scheme Schools Council, said many schools had five or six teacher resignations, with some reporting 15 to 20, more than in previous years. Not all were caused by emigration, he said, but the departures triggered "a musical-chair effect" of teachers changing jobs.

Tai Tak Ching, who retired as the head of the Wan Chai District Headmasters' Conference in August, estimated five to seven resignations per school, compared with only two or three in recent years.

Polly Chan, vice-chairwoman of the Hong Kong Aided Primary School Heads Council, said four teachers at her Yaumati Catholic Primary School - Hoi Wang Road emigrated and she had to replace 10 teachers in total over the summer. Chan said the higher turnover was caused by "the pandemic, plus social disturbances, plus political reasons." She said emigration had only become a significant factor this year.

Most of those who left had taught at the school for more than 15 years, he said, but some of their replacements did not have the postgraduate diploma required to fully qualify as a teacher, which Cheng described as a "compromise."

Cheng told Reuters he brought back a retired teacher to guide one of the new recruits, hired an external firm to help the new Japanese teacher and assigned mentors internally for the rest of the new staff. He said he expects the "big burden" of emigration to last another two or three years.

"The education sector takes a hit because the people with experience are leaving in droves," former PTU president Fung Wai-wah told Reuters, before the union disbanded. 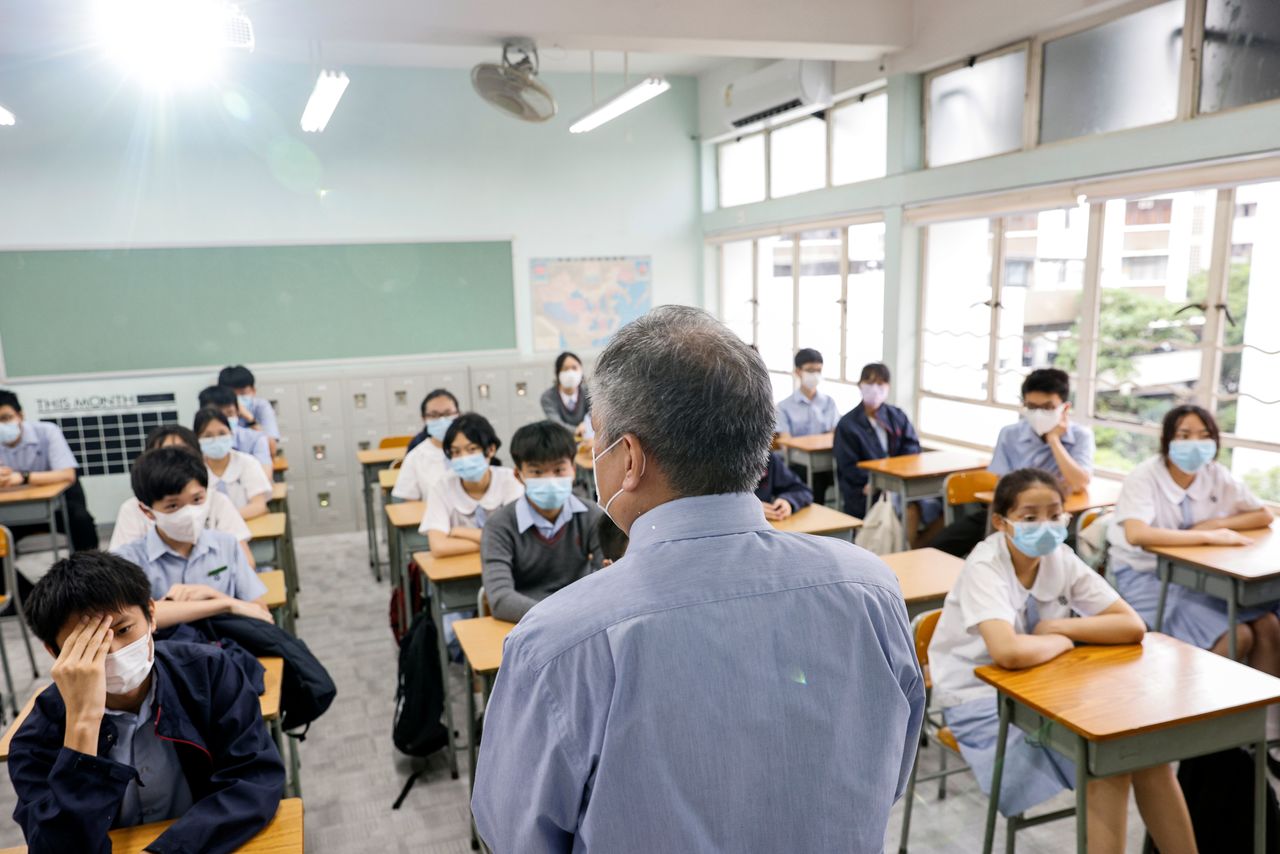 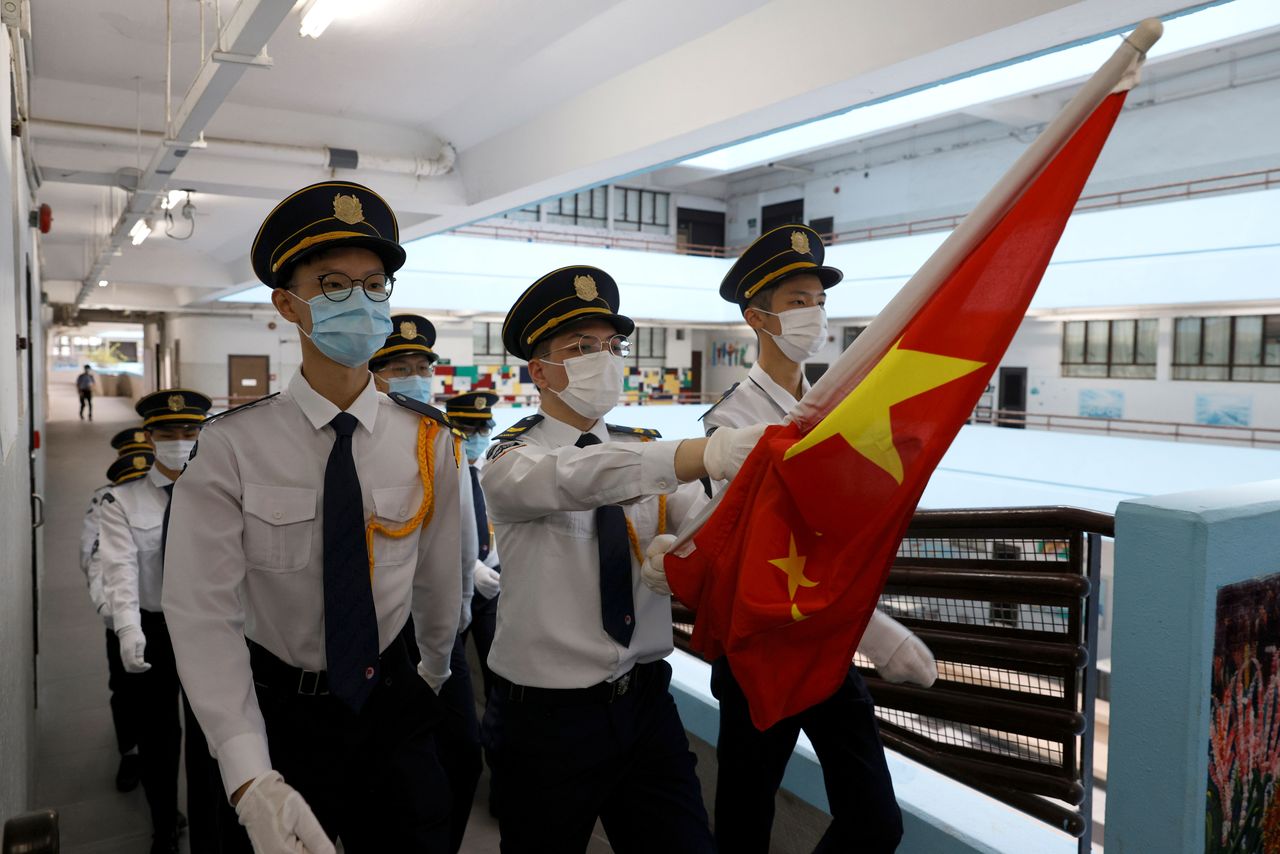 Secondary school students march with the Chinese national flag for a flag raising ceremony at the morning assembly during the first day of the new term in Hong Kong, China September 1, 2021. Picture taken September 1, 2021. REUTERS/Tyrone Siu 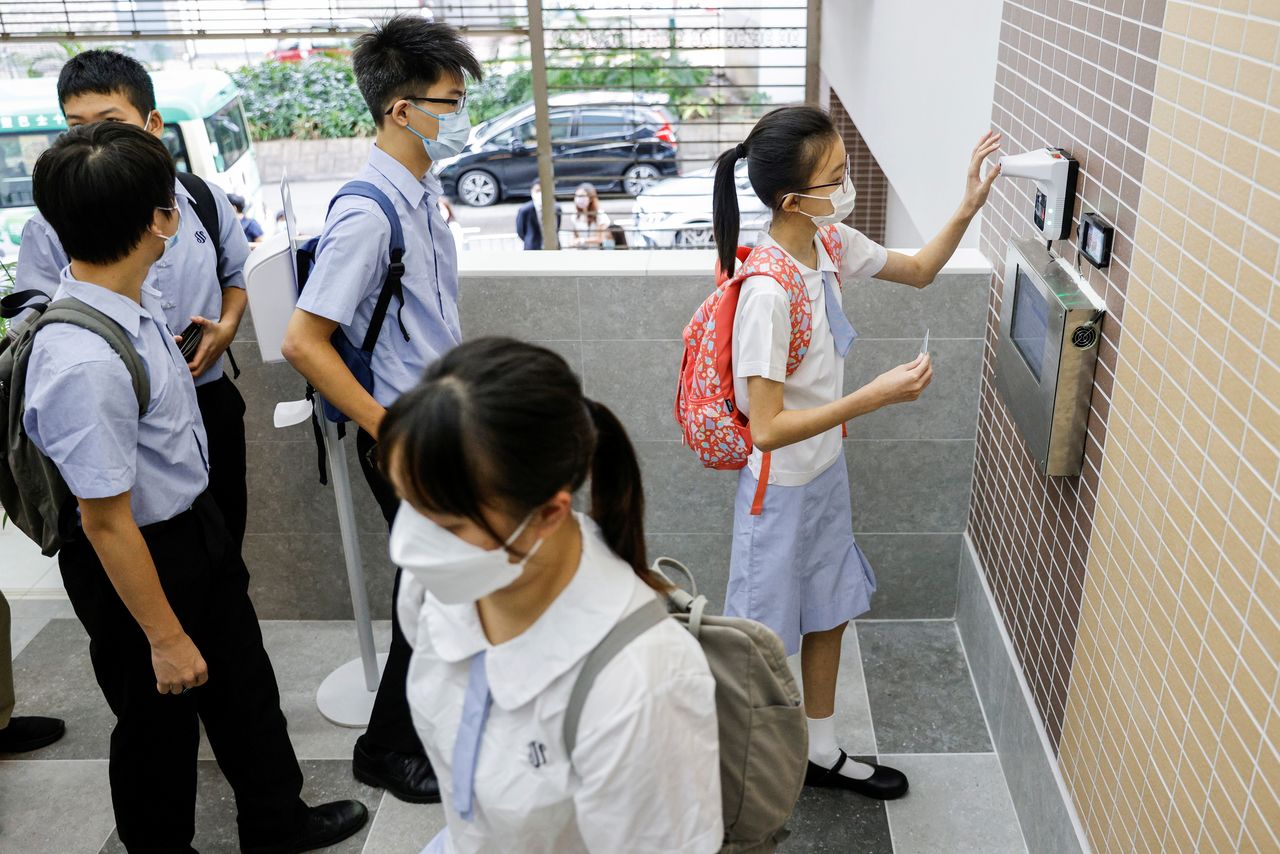 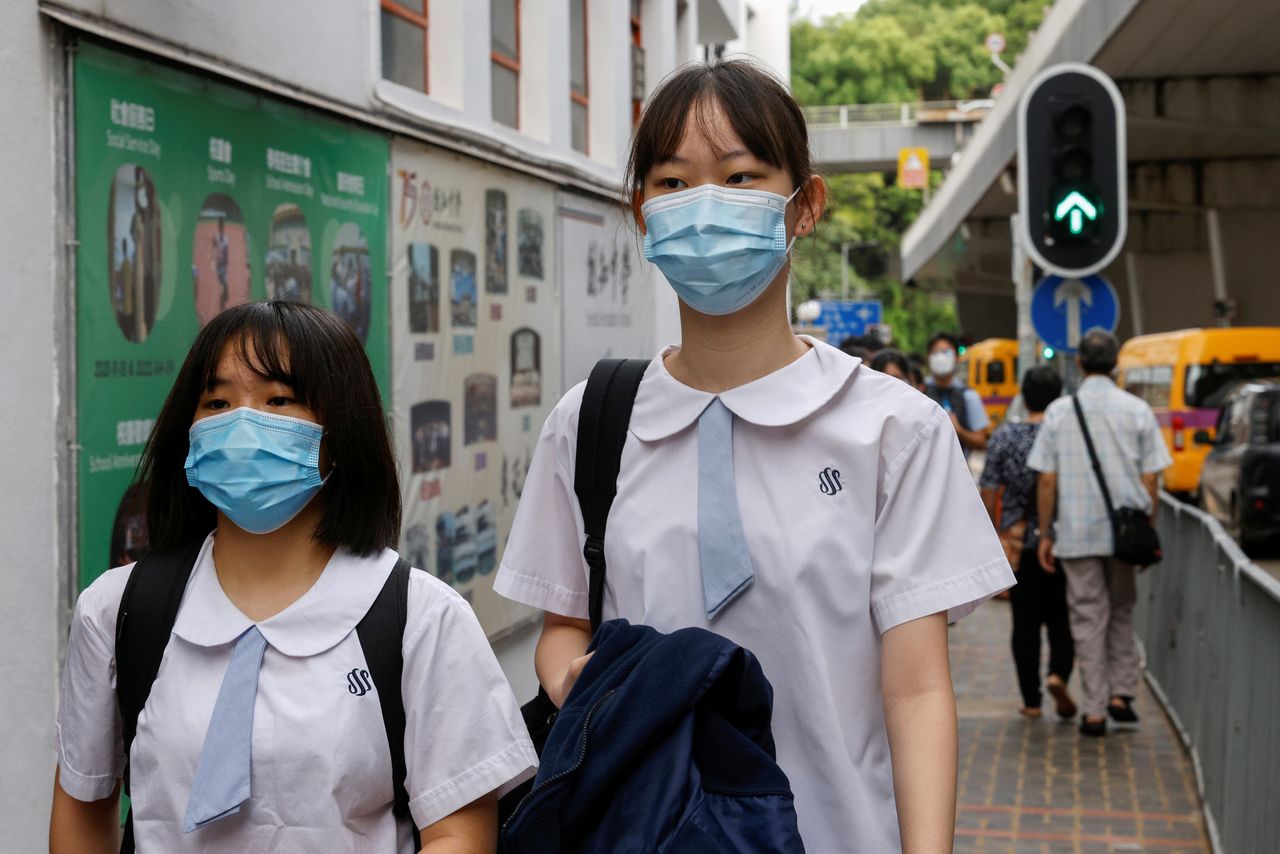 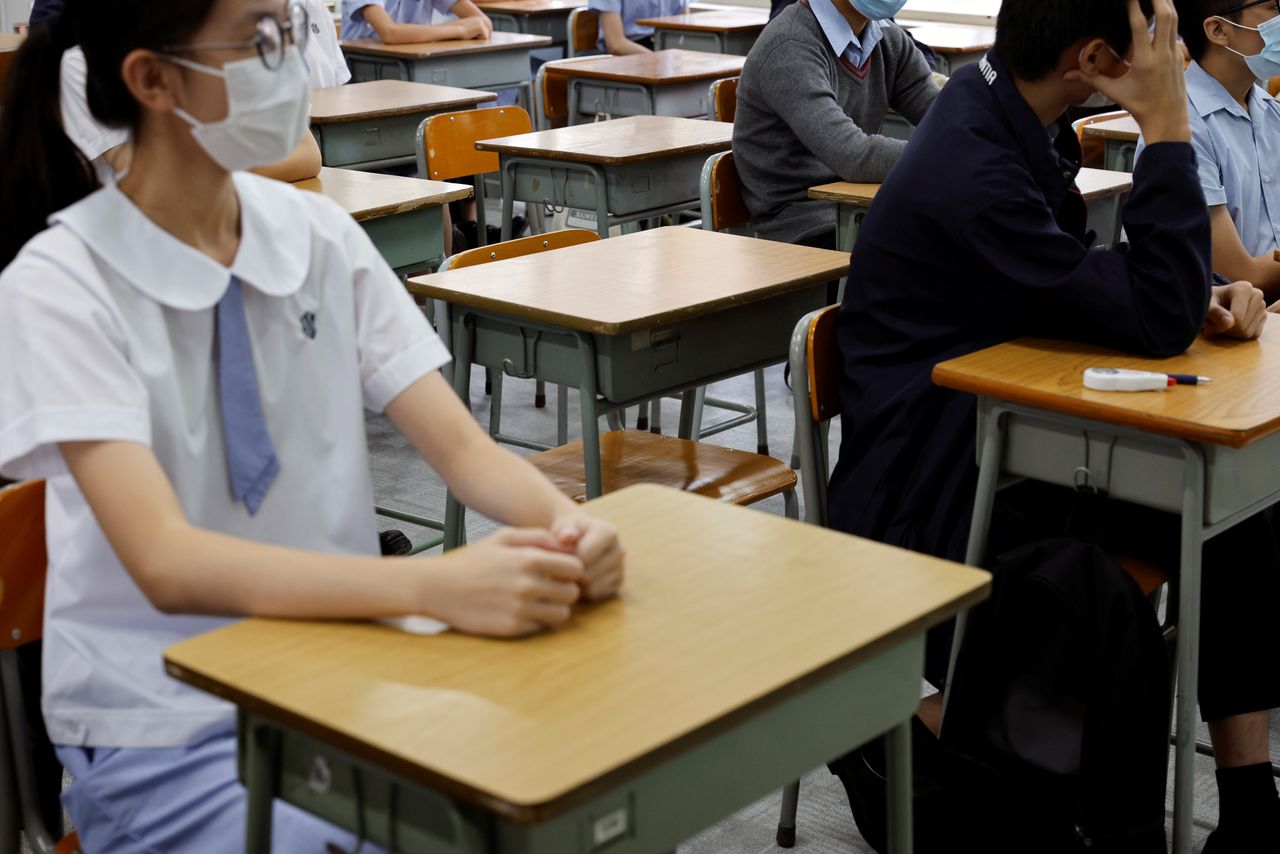 FILE PHOTO: Empty seats are seen inside a classroom of a secondary school at the first day of the new term in Hong Kong, China September 1, 2021. REUTERS/Tyrone Siu/File Photo