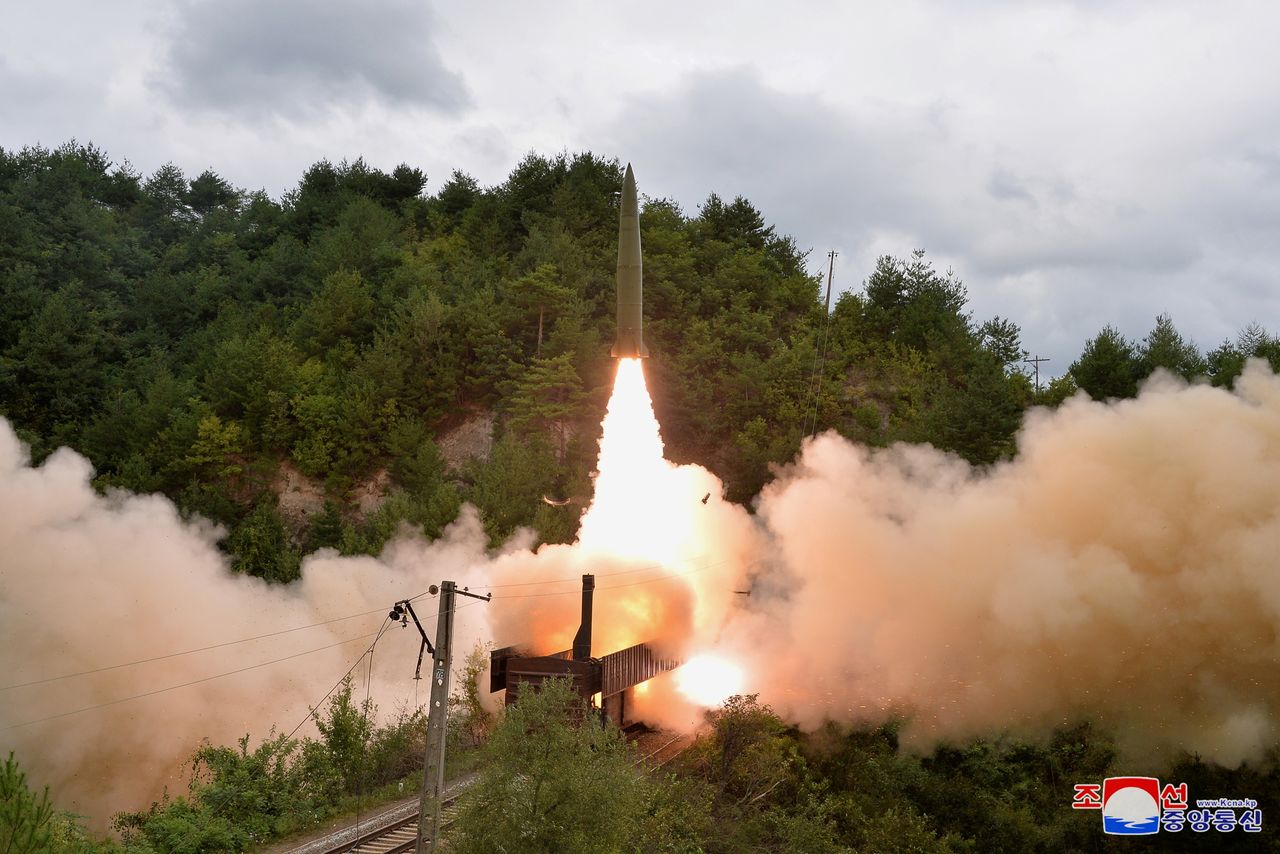 FILE PHOTO: A missile is seen launched during a drill of the Railway Mobile Missile Regiment in North Korea, in this image supplied by North Korea's Korean Central News Agency on September 16, 2021. KCNA via REUTERS

SEOUL (Reuters) - North Korea's state media accused the United States on Friday of double standards over military activities and pursuing a hostile policy towards Pyongyang that was hampering the restart of talks on the country's nuclear weapons and missile programmes.

The commentary comes after North Korea and South Korea both test fired ballistic missiles on Wednesday, the latest move in an arms race in which both nations have been developing increasingly sophisticated weapons.

Washington condemned the North Korean test - and its separate test days earlier of what experts said could be its first cruise missile capable of carrying a nuclear warhead - as a threat to its neighbours, but did not mention Seoul's test of a submarine-launched ballistic missile (SLBM).

In an article published by the official KCNA news agency, Kim Myong Chol, whom it described as an "international affairs analyst", said the United States had "stirred up a terrific furore" by presenting North Korea's actions as "threats to international peace and security".

"Terming them armed provocations timed to a certain occasion and aiming at a specific target, it faulted those measures which belong to our right to self-defence. This arrogant and self-righteous response is a vivid revelation of the American-style double-dealing attitude," Kim said.

"Today its high-handed practices have gone beyond the limit."

Little is known about Kim, though KCNA has often carried commentaries under his name and some South Korean media reports have described him as a Japan-based "unofficial spokesman" for the North, officially call the Democratic People's Republic of Korea (DPRK).

He said Washington was to blame for the stand-off preventing the restart of talks aimed at dismantling North Korea's nuclear and ballistic missile arsenals in return for sanctions relief.

"Even though contacts and dialogues are undertaken now, it is certain that the U.S. would raise the double-dealing yardstick by which it would call our acts for self-defence 'threats' to the world peace and its allies," Kim said.

"Unless the U.S. vouches for the withdrawal of its hostile policy toward the DPRK, the word denuclearization can never be put on the table."

His comments were in line with a statement on Wednesday by Kim Yo Jong, the powerful sister of North Korean leader Kim Jong Un, who lashed out at South Korea for criticising the North's "routine defensive measures" while developing its own missiles.

North Korea has been steadily developing its weapons systems, raising the stakes for the negotiations that were initiated between Kim Jong Un and former U.S. President Donald Trump in 2018 and have stalled since 2019.