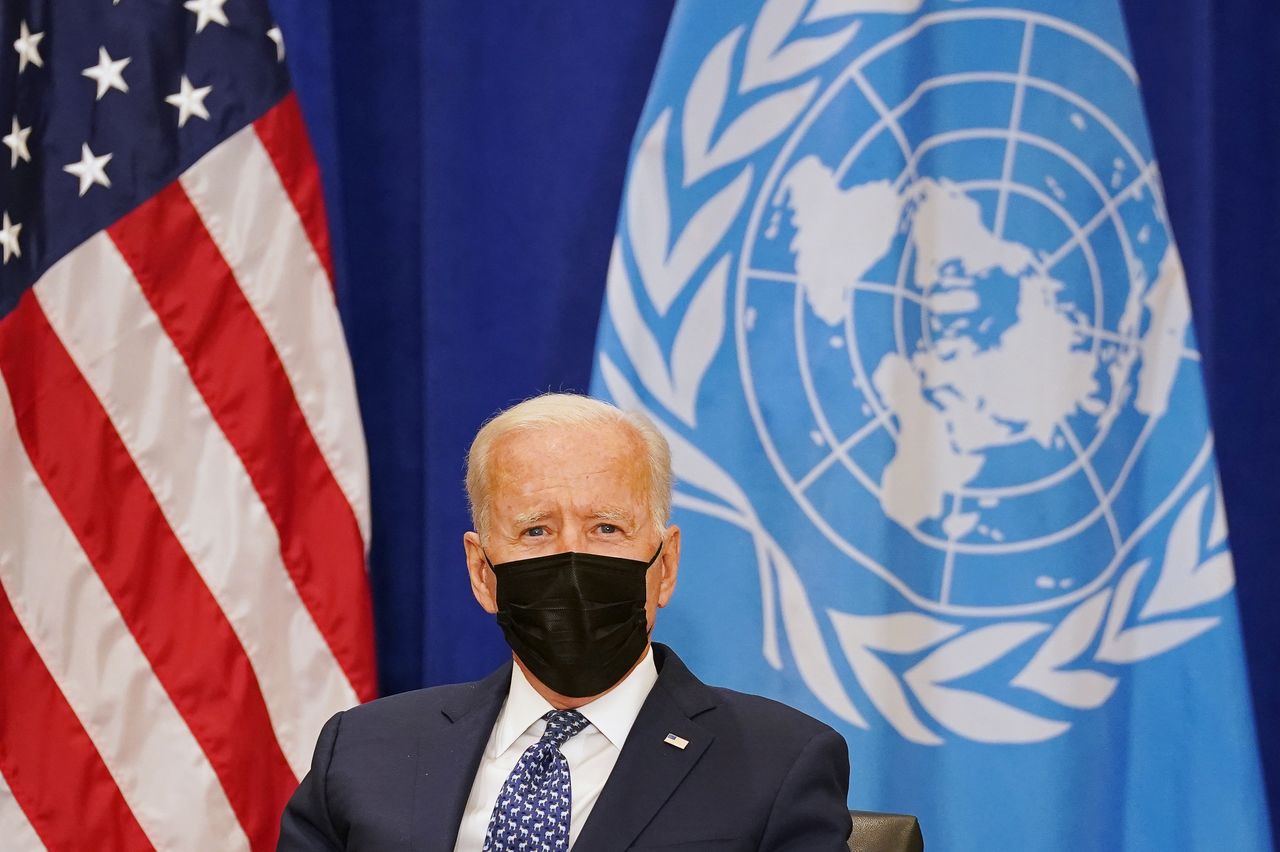 By Trevor Hunnicutt and Steve Holland

The United States will help resolve crises from Iran to the Korean Peninsula to Ethiopia, Biden told the annual U.N. General Assembly gathering.

The world faces a "decisive decade," Biden said, one in which leaders must work together to combat a raging coronavirus pandemic, global climate change and cyber threats. He said the United States will double its financial commitment on climate aid and spend $10 billion to reduce hunger globally.

Biden did not utter the words "China" or "Beijing" but sprinkled implicit references to America's increasingly powerful authoritarian competitor throughout his speech, as the two nations butt heads in the Indo-Pacific and on trade and human rights issues.

He said the United States will compete vigorously, both economically and to push democratic systems and rule of law.

"We'll stand up for our allies and our friends and oppose attempts by stronger countries to dominate weaker ones, whether through changes to territory by force, economic coercion, technical exploitation or disinformation. But we're not seeking - I'll say it again - we are not seeking a new Cold War or a world divided into rigid blocs," Biden said.

Chinese President Xi Jinping, who told the U.N. Tuesday that China would not build new coal-fired power projects abroad, used his video address to obliquely criticize the U.S. as well.

"Recent developments in the global situation show once again that military intervention from the outside and so-called democratic transformation entail nothing but harm," Xi said.

Biden came to the United Nations facing criticism at home and abroad for a chaotic U.S. withdrawal from Afghanistan that left some Americans and Afghan allies still in that country and struggling to get out.

U.S. MILITARY 'NOT THE ANSWER'

Biden's emphasis on allied unity is being tested by a three-way agreement among the United States, Australia and Britain that undermined a French submarine deal and left France feeling stabbed in the back.

Biden met Australian Prime Minister Scott Morrison in New York and was to meet British Prime Minister Boris Johnson at the White House later in the day. His staff has been trying to arrange a phone call between Biden and French President Emmanuel Macron to try to cool tempers over the submarine deal.

The United States would defend its national interests, Biden said, but "the mission must be clear and achievable," and the American military "must not be used as the answer to every problem we see around the world."

Biden, a Democrat, hoped to present a compelling case that the United States remains a reliable ally to its partners around the world after four years of "America First" policies pursued by his Republican predecessor Donald Trump.

“President Biden’s speech today does not match his actions. His failed leadership led to the chaotic and deadly withdrawal from Afghanistan that abandoned our partners, angered our NATO allies and emboldened our adversaries," said U.S. Representative Michael McCaul, a Texas Republican.

Biden said that he remains committed to peacefully resolving a dispute with Iran over its nuclear program. He vowed to defend U.S. ally Israel but said a two-state solution with the Palestinians is still needed but a distant goal.

Discussing oppression of racial, ethnic and religious minorities, Biden singled out China's Xinjiang region where rights groups estimate that one million Uyghurs and other ethnic minorities have been interned in camps.

In response to Biden's reference to Xinjiang, China's mission to the United Nations, told Reuters: "It's completely groundless. We totally reject. The U.S. should pay more attention to its own human rights problems."

U.N. Secretary-General Antonio Guterres, who begins a second five-year term at the helm of the world body on Jan. 1, warned earlier of the dangers of the growing gap between China and the United States, the world's largest economies.

"I fear our world is creeping towards two different sets of economic, trade, financial and technology rules, two divergent approaches in the development of artificial intelligence - and ultimately two different military and geopolitical strategies," Guterres said.

"This is a recipe for trouble. It would be far less predictable than the Cold War," Guterres said.

(Reporting by Trevor Hunnicutt and Michelle Nichols at the United Nations and Steve Holland in Washington; Editing by Heather Timmons, Will Dunham and Grant McCool)