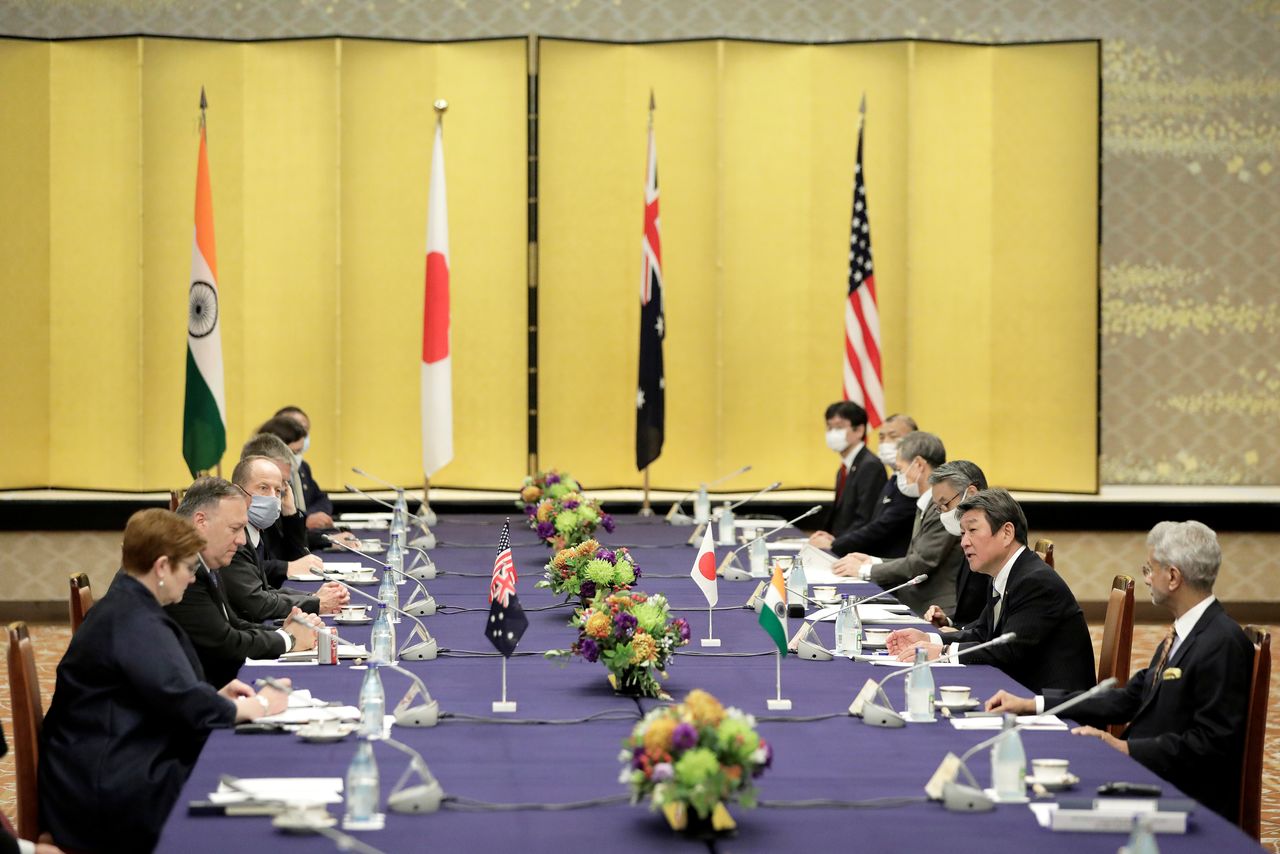 By Sanjeev Miglani and Kiyoshi Takenaka

NEW DELHI (Reuters) - The leaders of the United States, Japan, Australia and India will hold a first in-person summit in Washington on Friday, aiming to bolster cooperation in the Indo-Pacific region and push back against China's growing dominance.

The meeting of the Quad, as the grouping of the four major democracies is called, will take place just days after the United States, Britain and Australia announced a security pact under which Australia will be provided with nuclear-powered submarines.

China denounced the move as damaging to regional peace and security.

Here are some of the issues on the Quad agenda :

The four-nation group will look for ways to promote a free and open Indo-Pacific region and act as a bulwark against any Chinese expansionism. Beijing has laid claim to around 90% of the South China Sea and built military facilities on artificial islands and the Quad nations are concerned these could be used to restrict free movement through the important trade route.

The Quad nations have begun holding annual naval exercises across the Indo-Pacific to demonstrate interoperability, and the United States itself conducts freedom of navigation patrols in the South China Sea.

According to the Japanese foreign ministry, the summit is "an important opportunity to send a message to the international community and to the region that the leaders of the four countries, which are major Indo-Pacific nations that share basic values, are committed to strengthening the free and open international order based on the rule of law."

When the Quad leaders - U.S. President Joe Biden, Indian Prime Minister Narendra Modi, Japanese Prime Minister Yoshihide Suga and Australian Prime Minister Scott Morrison - first held a virtual summit at the height of the COVID-19 crisis in March they committed themselves to supplying a billion COVID-19 shots across Asia by the end of 2022.

The plan was to make U.S. vaccines in India with financing provided by the U.S. and Japan and to deliver them to countries in southeast Asia. But it foundered after India was hit by a devastating surge of infections in April-May, forcing the government to halt all exports as it sought to vaccinate its own, large population.

Now the Indian government has said they are ready to restart exports and an Indian foreign ministry said the leaders are expected to lay out a plan on Friday.

The four nations are also trying to forge a consensus on 5G telecommunications network, data security and free flow of information. They have held discussions on building supply chains for certain critical minerals and technologies, another area they have been at odds with China.

Semiconductor technology is a key area of contest because computer chips power the modern economy and China has invested billions of dollars to build a domestic industry.

The Quad nations had also agreed to offer joint connectivity projects and transparent infrastructure funding for countries in the region as an alternative to China's massive Belt and Road Initiative that has left some countries in debt. But officials say there has been little progress on the ground, and the summit offered a chance to get things moving again.

(Reporting by Sanjeev Miglani in New Delhi and Kiyoshi Takenaka in Tokyo; Editing by Catherine Evans)