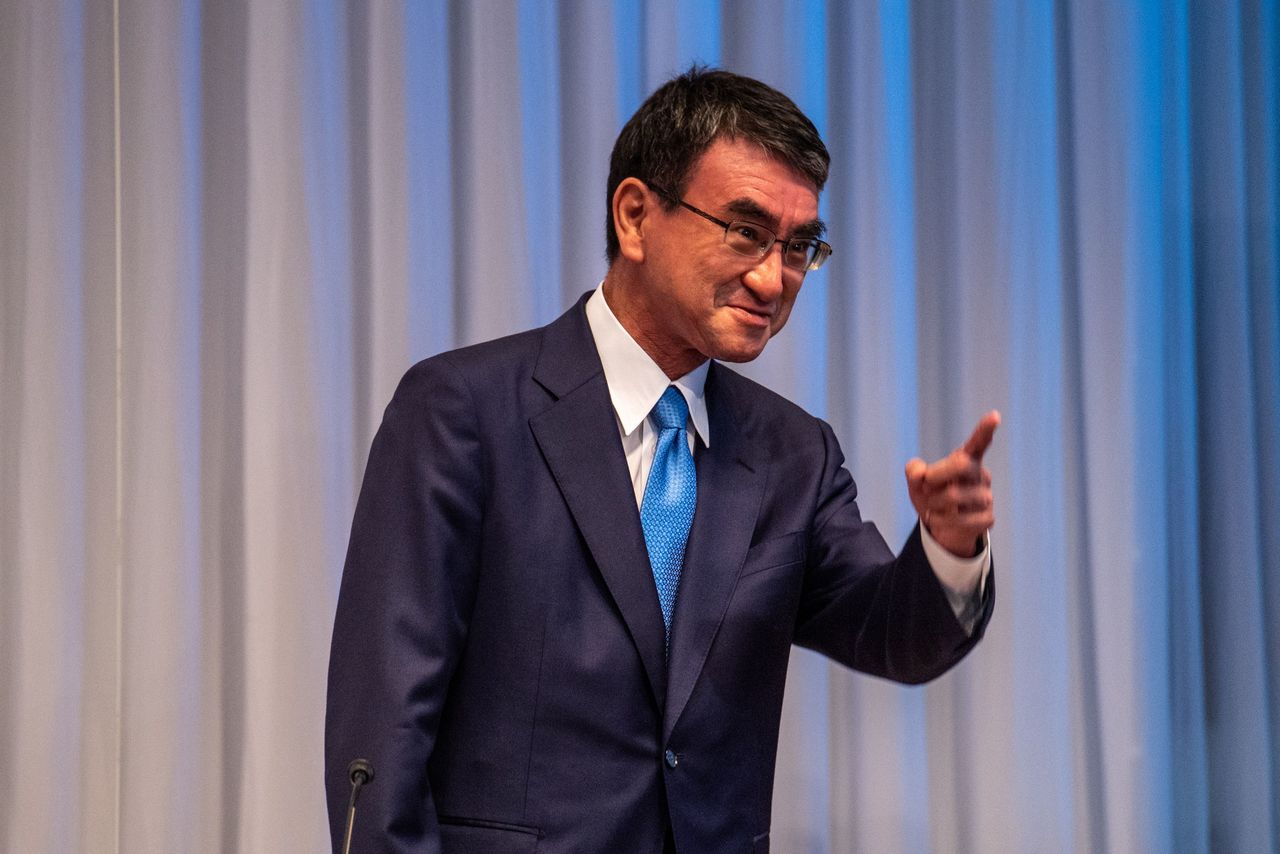 By Kiyoshi Takenaka and Sakura Murakami

TOKYO (Reuters) - Renewable energy companies are betting that the leading contender in the race to become Japan's next prime minister, Taro Kono, will unleash changes allowing more market access and a fairer playing field after years of neglect.

The 58-year-old has long championed more renewable supplies in Japan's roughly $150 billion electricity sector, the world's biggest national power market outside China, and has promised https://www.reuters.com/world/asia-pacific/japan-pm-contender-kono-wants-renewable-energy-5g-be-focus-stimulus-package-2021-09-16 an economic stimulus package focused on renewables if he wins.

Investors have been buying renewable energy shares hoping the popular Kono wins the Sept. 29 vote for the Liberal Democratic Party's (LDP) next leader and -- by virtue of its majority in the parliament -- becomes Japan's next premier.

Japan's energy mix is already undergoing change, with renewables on the rise, replacing fossil fuels which shored up power following the Fukushima nuclear disaster in 2011.

Kono, a former defence minister and scion of a political dynasty, is currently in charge of administrative reform and has clashed with the powerful industry ministry (METI), which like the steel federation, has supported a revival of the moribund nuclear sector.

"Kono has eagerly taken on deregulation over the past year, and a lot has changed. Japan's energy shift will advance further if Kono is elected," said Mika Ohbayashi, a director at Renewable Energy Institute founded by SoftBank Group Corp. Chief Executive Masayoshi Son.

"The attitudes of officials at METI have drastically changed. Their attitudes toward renewable energy startups used to be rather cold, but they can't afford to continue that stance," said Koki Yoshino, executive officer at Japan Renewable Energy, which operates nearly 50 wind and solar power projects.

In 2018 a panel convened by Kono, who was then foreign minister, caused controversy by wading into the energy debate, normally METI's preserve, supporting a call to get rid of nuclear power and coal while dramatically increasing renewables.

The world's third-largest economy and fifth-biggest carbon emitter is heavily reliant on imported fossil fuels 10 years after the Fukushima catastrophe almost killed off its nuclear sector, the source of a third of Japan's electricity before 2011.

Renewable energy is fast catching up and accounted for 22% of Japan's energy supplies last year, meeting a recent government target a decade ahead of schedule and even contributed more than coal in one quarter.

Despite that growth, critics say METI has introduced rules that make it easy to force solar plants to shut down, known as curtailment, when supplies are abundant.

Connections for renewable projects are also being withheld at the whim of entrenched companies, Kono says on his home page where he outlines his polices.

Rules governing the use of a major transmission line that connects Japan's main island to Hokkaido in the north need to be revised to allow more renewables into the mix, Kono says.

Electricity transmitted through the line has to be declared a day ahead of the actual transmission, making it difficult for weather-dependent renewables to use the line, which is currently underutilised, to transmit power to Tokyo, he says.

METI has increased the target for renewables to produce 36-38% of Japan's electricity by 2030, up from 22-24%, and has set auction rules for offshore wind, one of the fast growing sectors in other parts of the world.

Yusuke Kojima, director at Looop Inc, an electricity retail start-up that also sells solar power plant and storage battery products, said he hoped Kono would support the industry and said that the recent policy shifts marked a big change for his business.

"In the past, we couldn't prioritise renewable energy because Japan as a whole didn't think of it as a main source of power. But the carbon neutrality pledge and other policies mean renewables are now on the table," said Kojima.