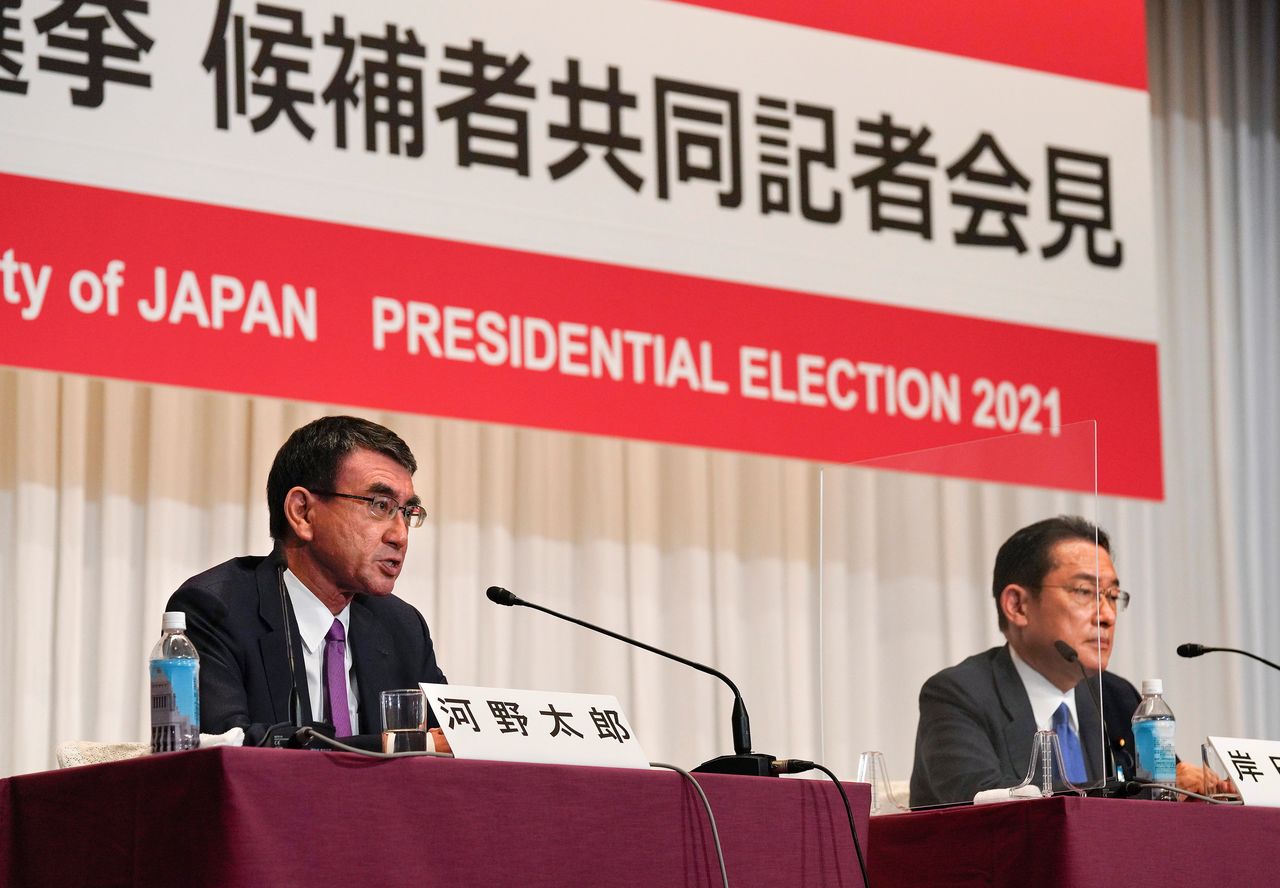 TOKYO (Reuters) - Japan's ruling party votes on Wednesday for the country's next prime minister in an election that has turned into the most unpredictable race since Shinzo Abe made a surprise comeback almost a decade ago, defeating a popular rival in a runoff.

The winner of the Sept. 29 contest to lead the conservative Liberal Democratic Party (LDP) is almost certain to succeed unpopular Yoshihide Suga as premier because the party has a majority in parliament's powerful lower house.

The race has introduced a rare dose of uncertainty into Japanese politics after Abe's nearly eight-year tenure that made him the country's longest-serving premier. Abe ran uncontested in 2015 and roundly defeated his sole rival three years later.

Last year, LDP factions rallied around Suga after Abe quit, citing ill-health. But Suga's voter ratings tanked over his handling of the COVID-19 pandemic, prompting him to announce his departure ahead of a general election that must be held by Nov. 28.

"This time there is no band-wagon to jump on and factions are divided," said Steven Reed, a professor emeritus at Chuo University. "That's pretty rare."

Contenders need to attract votes from grassroots LDP members and rookie lawmakers, more likely to be swayed by popularity ratings, while also wooing party bosses. But rank-and-file members will have less say if no candidate wins a majority and a second-round vote is held between the top two contenders.

Public broadcaster NHK reported on Sunday that Kishida led among lawmakers and Kono, followed by Takaichi, among party members and that a second-round runoff vote was inevitable.

Neither Takaichi nor Noda, seeking to become Japan's first female premier, were initially viewed as having any chance. But analysts say support from Abe and core conservatives has bolstered Takaichi's chances, though she remains a long shot.

A win by Kono or Kishida is unlikely to trigger a huge shift in policies as Japan seeks to cope with an assertive China and revive an economy hit by the pandemic, but Kono's push for renewable energy and to remove bureaucratic obstacles to reform have made him appealing to investors and business chiefs.

Both share a broad consensus on the need to beef up Japan's defences and strengthen security ties with Washington and other partners including the QUAD grouping of Japan, the United States, Australia and India, while preserving vital economic ties with China and holding regular summit meetings.

"The consensus in Japan and the LDP is that to strike a balance between America and China, Japan must be tough on defence but maintain economic ties with China," said Tsuneo Watanabe, a senior fellow at the Sasakawa Peace Foundation.

Takaichi has been more outspoken on hotbutton issues such as acquiring the ability to strike enemy missile launchers. She has also made clear that as premier, she would visit the Yasukuni Shrine for war dead, seen in Beijing and Seoul as a symbol of Japan's past militarism. Kono has said he would not.

Kono and Kishida have pointed to the failure of Abe's signature "Abenomics" mix of expansionary fiscal and monetary policies and growth strategy to benefit households but offered few specifics as to how to fix the flaw, while Takaichi has modelled her "Sanaenomics" on her mentor's plans. [L4N2QQ0FG]

All of the candidates are expected to put efforts to redress Japan's huge public debt on the backburner while focusing on fiscal stimulus to revive the economy.

The candidates have also clashed over cultural values, with Kono favouring legal changes to allow same-sex marriage and separate surnames for married couples, both anathema to conservatives like Takaichi.