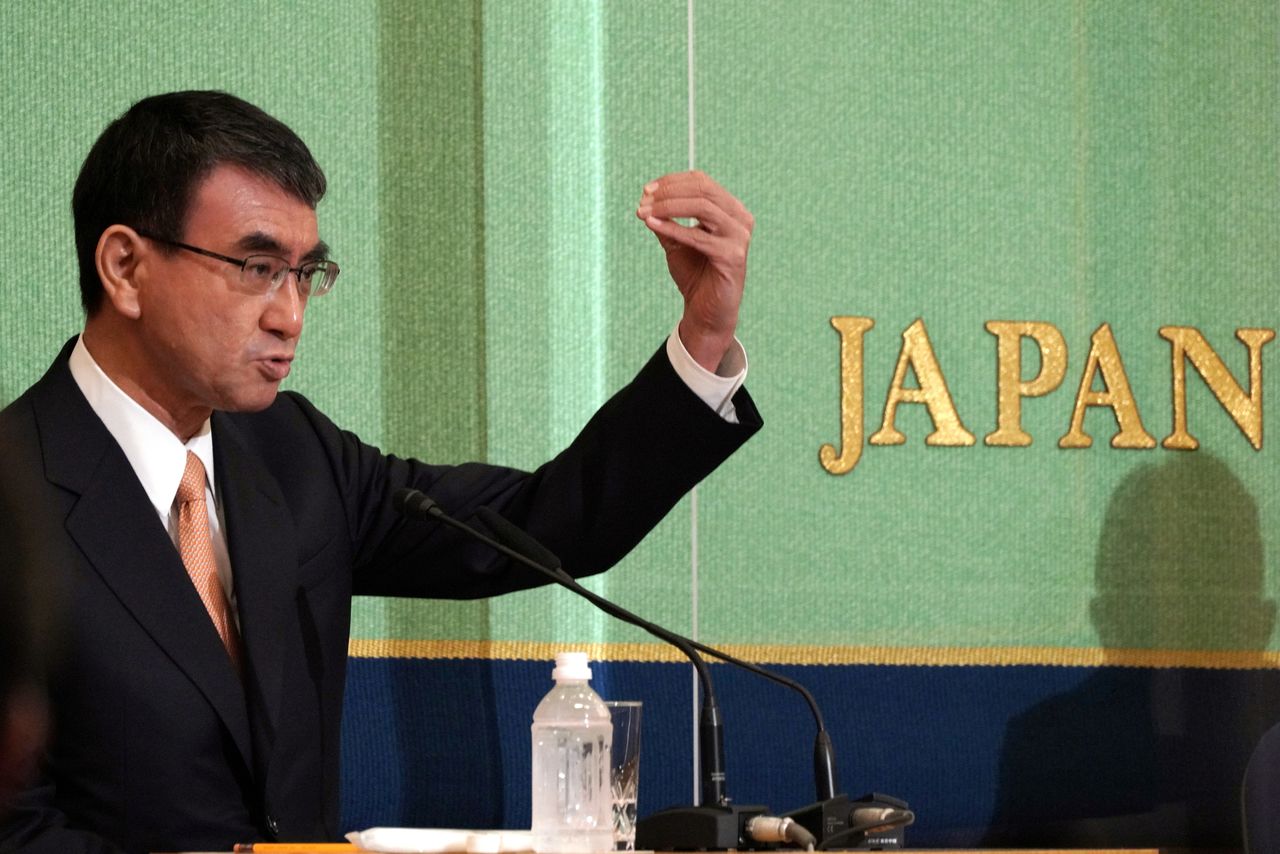 Taro Kono, the cabinet minister in charge of vaccinations, one of the candidates for the presidential election of the ruling Liberal Democratic Party speaks during a debate session held by Japan National Press Club September 18, 2021 in Tokyo, Japan. Eugene Hoshiko/Pool via REUTERS/Files

TOKYO (Reuters) - LGBTQ rights activists are hoping that Japan may finally allow same-sex marriage if Taro Kono, who has publicly supported gay marriage, becomes the country's next prime minister, but change will not come easily.

Kono is seen as the leading contender to win the ruling party's leadership vote on Wednesday and become premier.

Of the four candidates for the Liberal Democratic Party leadership, Kono and Seiko Noda have supported gay marriage. Same-sex marriage is only legal in Taiwan in Asia.

The fact that same-sex marriage, long seen as a cultural flashpoint among conservatives in Japan, is even being discussed in the leadership race shows how much wider acceptance the issue has garnered among lawmakers and the public, activists said.

"It's great that he (Kono) clearly supported same-sex marriage and it's significant that this came from someone inside the LDP" during a leadership race, said Gon Matsunaka, an LGBTQ rights activist in Tokyo.

Same-sex marriage is not legal in Japan, but there has been a gradual move to broader acceptance of gay couples.

"This shows the extent that the LGBTQ rights movement has moved forward here - same-sex marriage was just never raised as an issue in previous leadership races," said Makiko Terahara, a lawyer who heads an organisation that campaigns for same-sex marriage.

Since Shibuya ward in Tokyo became the first municipality to issue certificates recognising same-sex partners in 2015, some 100 local governments have followed suit to cover over a third of the country's population. Such certificates recognise same-sex couples but provide limited legal rights.

A March poll by the Asahi newspaper found that 65% supported gay marriage, while 22% opposed it.

But despite the public support, political change will be a different matter, advocates say.

"It's a very big thing that he (Kono) is in favour, but if he becomes PM will he quickly make this happen?... I think that'll be kind of hard," said Takeharu Kato, a lawyer who was involved in a landmark ruling that said disallowing same-sex marriage is unconstitutional.

Kono has also come out in support of separate surnames for married couples and allowing heirs of female lineage succeed the imperial throne.

The timing and careful wording of his statement suggests it was a strategic move to capture support among more progressive party members, experts say.

"(Kono) seems to think that his best shot at victory is being the overwhelming choice of not just within the grassroots, but among the electorate as a whole," said Tobias Harris, a senior fellow at the Center for American Progress.