Defying Delta: Back to school goes better than feared

(Reuters) - School for children in many nations has been underway for more than a month and fears the Delta coronavirus variant would derail in-person learning have largely proven unfounded.

In a dozen countries with high vaccination rates in Asia, Europe and the United States, case rates that surged in August have mostly fallen back, according to local data and officials.

The jury is out on how much this is due to seasonal factors amid a global decline in cases, and how much it is linked to vaccinations and other preventative measures. Public health experts say they will continue to watch for signs of an increase in cases as winter approaches.

“In the United States, in-school transmission is higher in places with low adult vaccination and no mitigation, but, overall, schools have stayed open,” said Monica Gandhi, professor of medicine at University of California San Francisco Medical School. “It is going better than expected.”

Cases among children increased nearly seven fold in August but peaked the week ended Sept. 2, American Academy of Pediatrics data shows. But only about 2% of U.S. schools have closed temporarily because of COVID-19 outbreaks, according to research firm Burbio, which tracks school closings.

Children represent the largest swath of the unvaccinated in most wealthy countries, either because shots for their age groups have only just begun or are not yet approved.

There are exceptions. In Singapore, cases among children have been on the rise for all of September and in Japan, Tokyo schools are alternating students in class.

But in Scandinavia, Scotland, Germany, France, South Korea and the United States, cases are falling, despite fears the more transmissible Delta variant would drive up infections.

Sweden, where schools have largely remained open throughout the pandemic, saw an initial rise of COVID-19 infections among kids after the summer holidays, but cases are now at low levels - both among children and the wider population.

In Norway, cases spiked to a daily record of 1,785 after the first two weeks of school, before falling by 60% as of last week.

"We do expect the current downward trend to continue for a few weeks and then level off at a low level, at least for a couple of months. Then there are uncertainties about the winter season,” Preben Aavitsland, senior physician at the Norwegian Institute of Public Health, told Reuters by email.

Aavitsland said everything from parties to music lessons drove adolescent cases up in August.

Britain has seen some increase in cases in schools that opened early on, but it has not spread to the wider population, said Neil Ferguson, epidemiologist at Imperial College London.

In Scotland, schools re-opened in mid-August, and positive test results spiked to record numbers by the end of the month.

In the week ended Sept. 3, around 1 in 20 children aged 3, 8, 13 and 16 were estimated to have COVID-19, compared with 1 in 45 of the wider population, according to government data. But cases among the under 19s have fallen each week since.

While cases began rising in Scotland before schools opened, some level of transmission appears to be happening in schools, Rowland Kao, an epidemiologist at the University of Edinburgh, told Reuters by email.

“It’s very hard to separate community transmission that is related to schools, to transmission in schools. However, clusters of cases in single classrooms do not appear to be particularly high, suggesting that it is at least a mix of both,” Kao said.

In the United States, the number of children’s cases has grown as a percentage of overall cases, according to the American Academy of Pediatrics.

In Kentucky, for instance, 45 of the state’s 171 school districts have closed down at least once since the academic year began in August, according to Joshua Shoulta, a spokesman for the Kentucky School Boards Association.

Cases per 100,000 people in Kentucky are falling but still among the highest in the country and just over 50% of its population is fully vaccinated. The state’s school districts were already struggling with staff shortages before COVID-19 cases and quarantines, Shoulta said. The state legislature met in a special session last week, where lawmakers gave local school officials more autonomy to implement COVID-19 protocols.

“What we know now and the tools we have compared to where we were at this time last year makes it a slightly different ball game,” Shoulta said.

One Texas school district is struggling with less than half the substitute teachers it needs. Brent Hawkins, superintendent of the Livingston (TX) Independent School District, said the district was forced to close down for Labor Day week after more than 10% of the 600-member faculty got COVID-19.

Hawkins said Texas Governor Greg Abbott’s decision to bar school districts from requiring masks is driving much of the increase in cases. Livingston recorded more positive cases among students and teachers in the first few weeks of school than during all of last year, he said. Just under 7% of the district’s approximately 4,000 students, or nearly 300 children, had been infected as of mid-September.

“For a couple of weeks, we had people like myself and other administrators in classrooms substitute teaching,” Hawkins said.

Meanwhile, California is nearly nine times the size of Kentucky, with a population of around 40 million. With masks, ventilation and high vaccination rates, the San Francisco and Los Angeles school districts reported zero to few cases in their first few weeks. The state has had fewer than half of the number of school or district closures as Kentucky, according to Burbio. 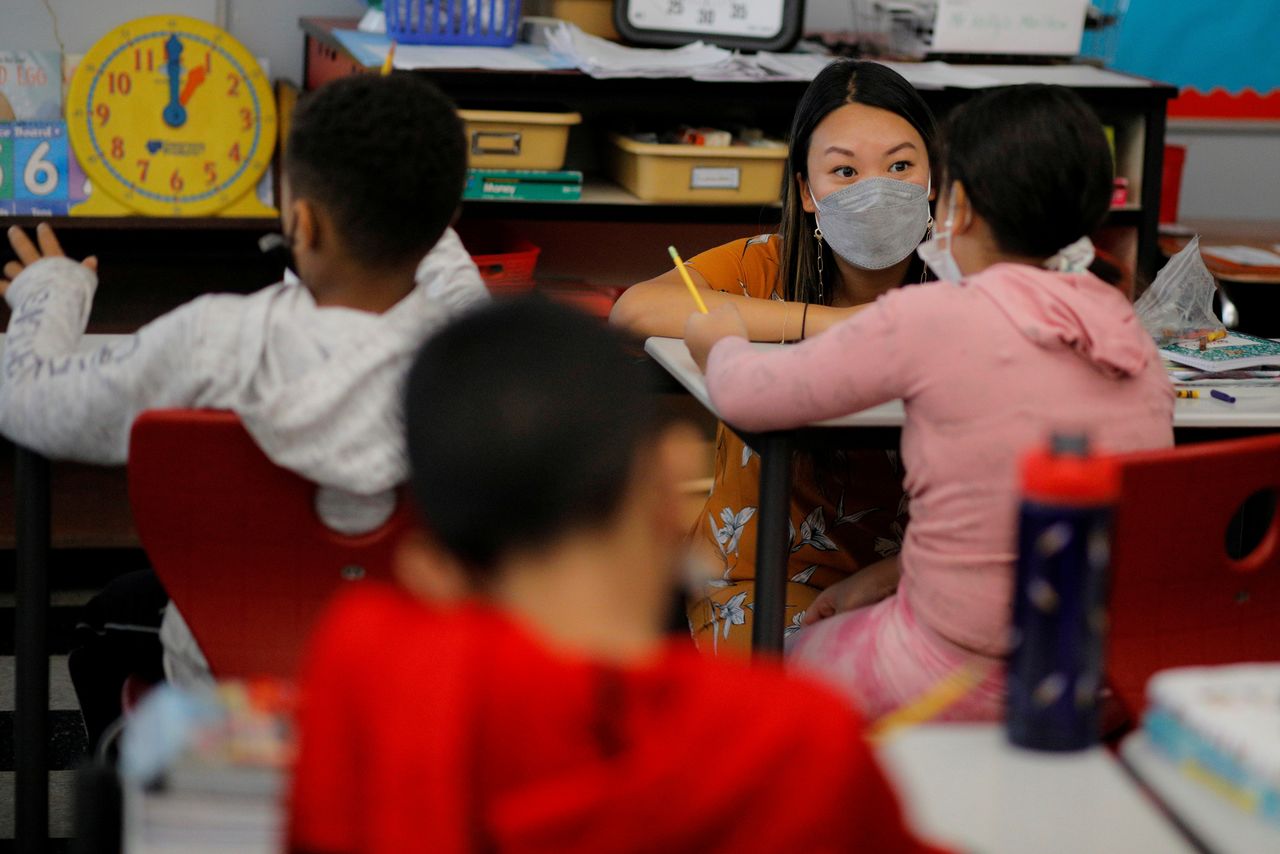 FILE PHOTO: Teacher Mary Yi works with a fourth grade student at the Sokolowski School, where students and teachers are required to wear masks because of the coronavirus disease (COVID-19) pandemic, in Chelsea, Massachusetts, U.S., September 15, 2021. REUTERS/Brian Snyder 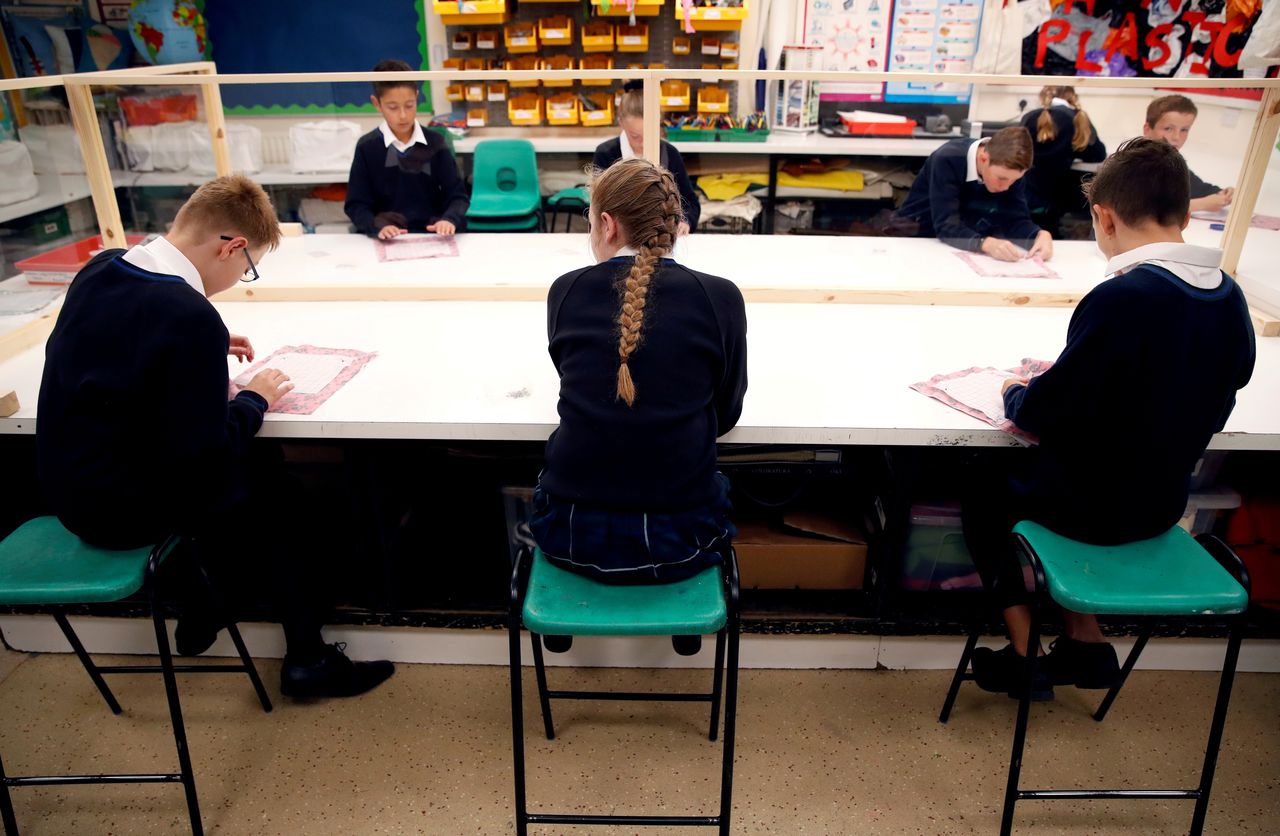 FILE PHOTO: Children sit in a classroom on their first day of school at Heath Mount, amid the outbreak of the coronavirus disease (COVID-19), in Watton at Stone, Britain September 3, 2020. REUTERS/Andrew Couldridge 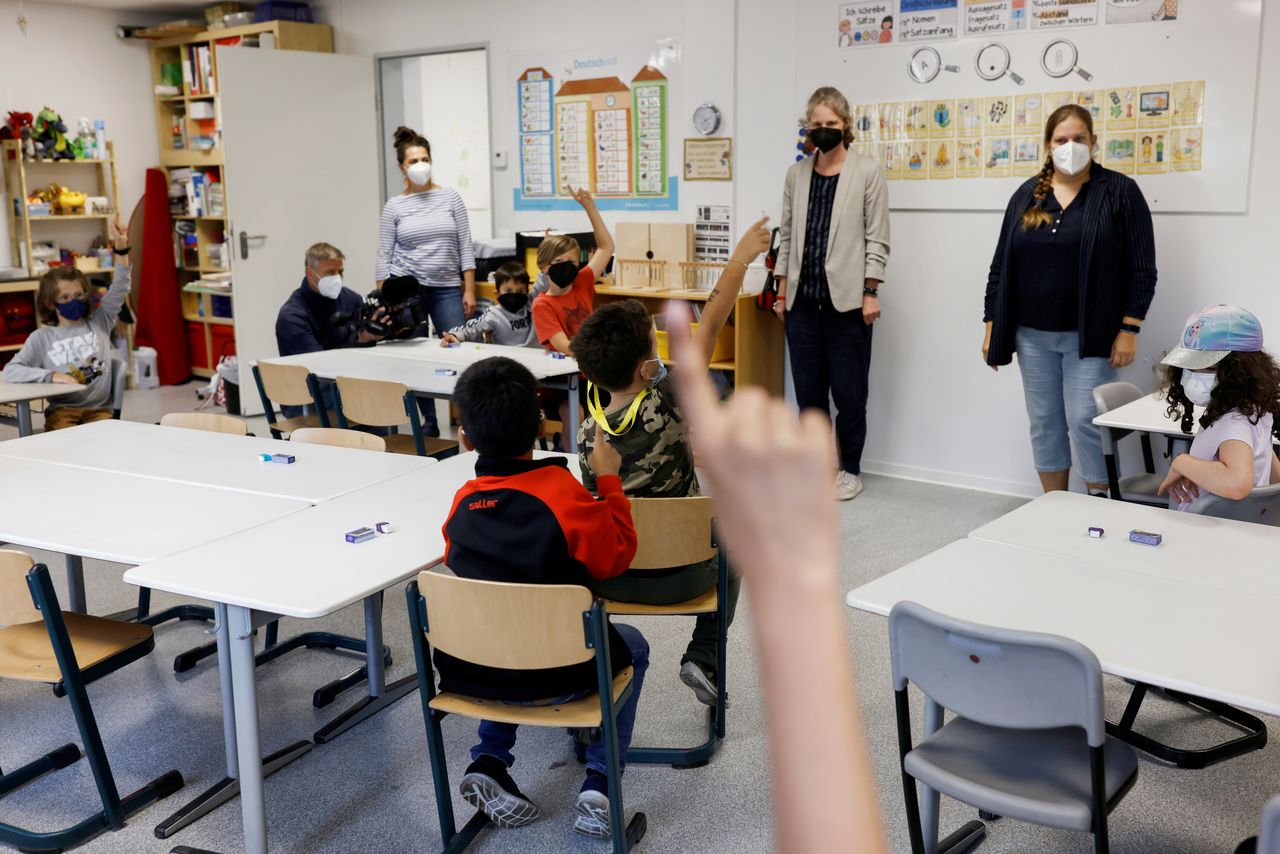