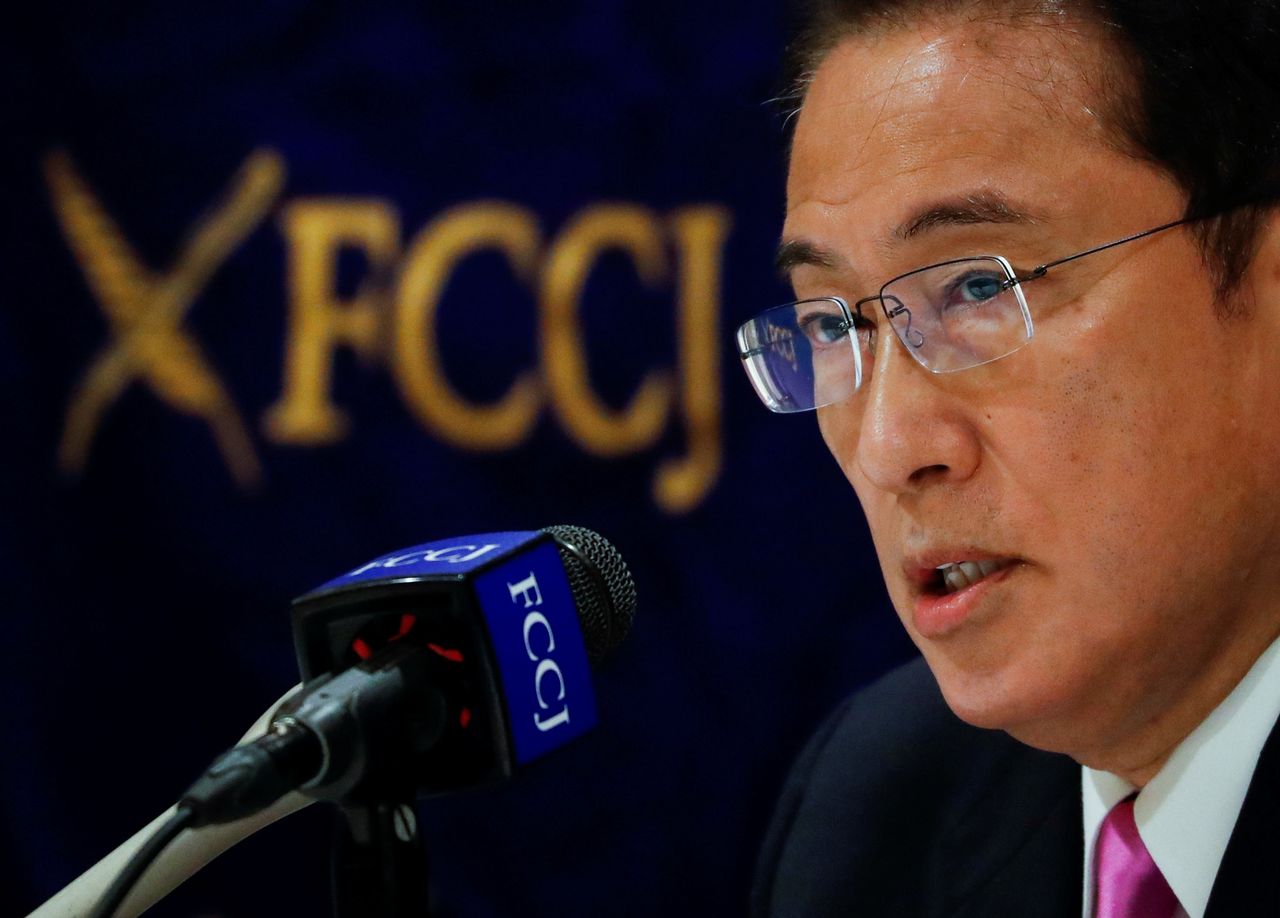 The soft-spoken Kishida, 64, won a run-off against vaccine minister Taro Kono with 257 votes to 170.

Here are some reactions to the news.

"Our country's government sincerely hopes that the Liberal Democratic Party of Japan, under the leadership of President Kishida, will continue to promote the all-round friendly and substantive cooperation between Taiwan and Japan, and work together to promote peace, stability and prosperity in the Indo-Pacific region."

"Economic policy up to now was kind of based around supporting businesses. This allowed them to keep unemployment and the number of business failures down, so it was extremely good for them. But there wasn't enough direct support for households so I think some people are in need.

"I think that support for households will become larger, with more emphasis on households than firms. I think that based on what he's saying there will be a closeup on direct household support to those in need, women and low-income people."

"As expected by most participants, Mr. Kishida won in the second round with a sturdy, though not overwhelming, 56% of the vote. He will likely form a relatively youthful cabinet, with females in several major posts, relatively quickly, and with such, along with a rebounding economy with fewer social restrictions, impress the voting public so much that the LDP should win by a very large margin in early November. This should lead to hopes for the cabinet's longevity, which consumers, corporations and investors should view positively.

"The need for fiscal stimulus will likely be reduced as the economy rebounds, but efforts will likely be made to reduce wealth inequality. Japan is perhaps the most egalitarian country in the world, but certainly many have suffered under the virus. The hope is that any future wave will be met by deep immunity, created by Japan's high vaccination rate, and very few deaths, such that these inequalities and personal hardships will not be worsened by lockdowns."

"Not very actively, but Kishida will try to improve relations with South Korea. He won't make things worse, and will try to avoid any case that will worsen the current situation. He is a bit different from former prime minister Abe. Though the LDP did not choose a generational change, the party is shifting from the ultra right wing to moderate right wing by picking Kishida.

"Because he is facing difficulties in handling upcoming general elections, he won't rush in to do something about relations with Korea, but will see after the South Korean presidential election next year. Basically, he is the person who thinks that improvement in ties with South Korea is connected with Japan's national interests, in terms of dealing with China and North Korea."

"Politics may decide the pace, but not the direction of the energy transition. Energy technology is developing fast in the world. Japan will need to harness modern low cost renewable energy technologies or see its industry fail in global competition."

"Originally, he's a fiscal purist (but) he said he'll postpone achieving the primary balance target, deploy economic stimulus worth tens of trillions of yen by year-end and that the sales tax won't be raised for 10 years, so that can be seen as an extension of the route followed under Abenomics."

"So Kishida's individual believes are unlikely to change fiscal or monetary policy. There's a big likelihood he'll follow the route followed up until now. The question is what he'll do to raise incomes. I think that'll be an issue of future focus."

"Kono didn’t really have the strength to pull the party together as a leader. That being said, Kishida presumably would have a weaker impact than Kono on the general election. In that sense, it appears that the LDP lawmakers prioritised party solidarity over a general election win… It doesn’t seem like they voted based on choosing the face of the next general election. That could possibly come from the fact that there is less of a sense of crisis inside the party because the approval ratings for the LDP is looking better since Suga said he would step down.

"But we don’t know how the approval ratings of Kishida and his cabinet would fare. If the leader had been Kono I would presume that approval ratings would skyrocket, so it’s possible the LDP might have misjudged the situation. I think the opposition is probably even glad that it was Kishida who won the leadership race."

"A win for the establishment. Kishida stands for stability, for not rocking the boat and most importantly, doing what elite technocrats tell him to do. Clearspeak - on economic and financial policy, Kishida will follow a path of steadfast by incremental change."

"With Kono, there was a chance of more radical, pro-business reform. With Kishida, it'll be predictable, consensus-driven and incremental."

"Japan’s economic recovery is way behind those of other nations in the world, and we are now in a critical condition. I urge Mr. Kishida to conduct a thorough assessment of the pandemic-related measures taken so far, and urgently implement the necessary legislations and bureaucratic reform. The new administration should utilize tools including proof of vaccination to stimulate pent-up demand and to promptly direct the accumulated household savings, now reaching almost 30 trillion yen, towards consumption."

"In order to ease concerns of the Japanese people, it will be crucial to build a sustainable framework for social security. I urge the new administration to introduce policies to achieve mid-to-long term growth, through productivity improvement driven by the private sector, regulatory reform to promote digitalization, as well as the bold implementation of a tax reduction system that encourages investment. I expect the administration to draw a "Post-COVID Grand Design (a 10 year vision)" that pursues social revitalization based on "mutual assistance" and economic restoration led by the private sector, and demonstrate leadership towards its realization. National security should also be emphasized amid continuing tensions around the world."

"If anything, Kishida's policies will likely focus on income distribution compared to Abenomics."

"The global economy is slowing down, in part due to coronavirus-linked supply chain disruptions in Southeast Asia, alongside power shortages in China, which are said to push down operating rates of factories. The economy is facing downward pressure due to these supply-side issues."

"The good news is that the fifth wave of coronavirus infections has decreased extremely rapidly so Kishida is lucky. Even if cash handouts aren't distributed at this time, GDP is likely to grow in the fourth quarter centred on consumption due to pent-up demand."

"We do not expect much of a departure from currently accommodative fiscal and monetary policies, while the Suga administration's emphases on decarbonisation and digital transformation will likely be carried over into the next government."

"Nevertheless, the credit implications of the leadership transition will ultimately be determined by the ability of Kishida to secure a strong mandate in the forthcoming general elections, which could support difficult reforms promoting economic growth and fiscal sustainability."

"The general direction will be that, instead of Abenomics's trickle-down theory that assumed a huge monetary easing will boost big companies' profits and then spread to other parts of the economy, (Kishida) explicitly refers to redistribution. So his policy is not just about a laissez-faire economic growth, and it might be unfavourable for market participants."

"Kishida winning the run-off was not a surprise, but eking out a first round plurality in the voting was somewhat."

"I expect that Kishida and his cabinet will try to be reasonably equanimous and thus he will distribute positions throughout the factions to keep party peace."

"If he is smart and does try to address the interests of the middle class better, as he said he would, he may end up being a longer-lived premier than many are predicting. If he does not, then he may face trouble in the upper house election next year, rather than the one coming up where he should benefit from stimulus and a honeymoon period."

"We know who will continue to hold power in the LDP - it's (former premier Shinzo) Abe and (Finance Minister Taro) Aso and the right wing. There is no mood for generational change."

"A whole month of monopoly over TV and newspaper coverage in the run-up to the election cannot be bad for the LDP but the underwhelming result will dampen the celebratory mood quickly, possibly. The opposition must be relieved that they don't have to fight against the darling of television (Kono)."

"Kishida's showing was respectable even among the rank and file members, so much so that he came out ahead in the first round, which no one expected."

"I don't expect any big changes in foreign policy. The changes, where they occur, will likely be on the margins and in terms of style. Kishida will continue to prioritize the alliance and find ways to strengthen it: free and open Indo-Pacific will continue to be a mainstay of Japan's diplomatic toolkit in its outreach to the region; and he will continue to take a hard position against China."

"Taiwan is the biggest question for me. Although there is nothing new policy-wise in terms of Japan's thinking about Taiwan, the importance of Taiwan for Japan's security, or even commitments to assist the U.S. in a Taiwan contingency, the Suga administration has been publicly active in having a conversation about Taiwan. There is an appetite for continuing this approach within the LDP, but it will be interesting to see whether the new leader takes this approach, such as advocating for Taiwan's inclusion in CPTPP (the Comprehensive and Progressive Agreement for Trans-Pacific Partnership)."

"From the standpoint of economic growth, Kono may have been a better choice than Kishida given his focus on reform and renewable energy policy in the medium to long run. Given a fragile economy, there’s not much room for Kishida to deviate from Abenomics though."

"Kishida appears to focus on distribution of wealth but such left-leaning policy doesn’t necessarily mesh with economic growth. Kishida is good at building consensus though, which will bring stability to politics needed to steer socio-economy."

"As Kishida, or whoever, becomes new prime minister, monetary easing remains on track. Kishida is unlikely to exit from massive monetary stimulus or raise interest rates any time soon as doing so could boost the yen."