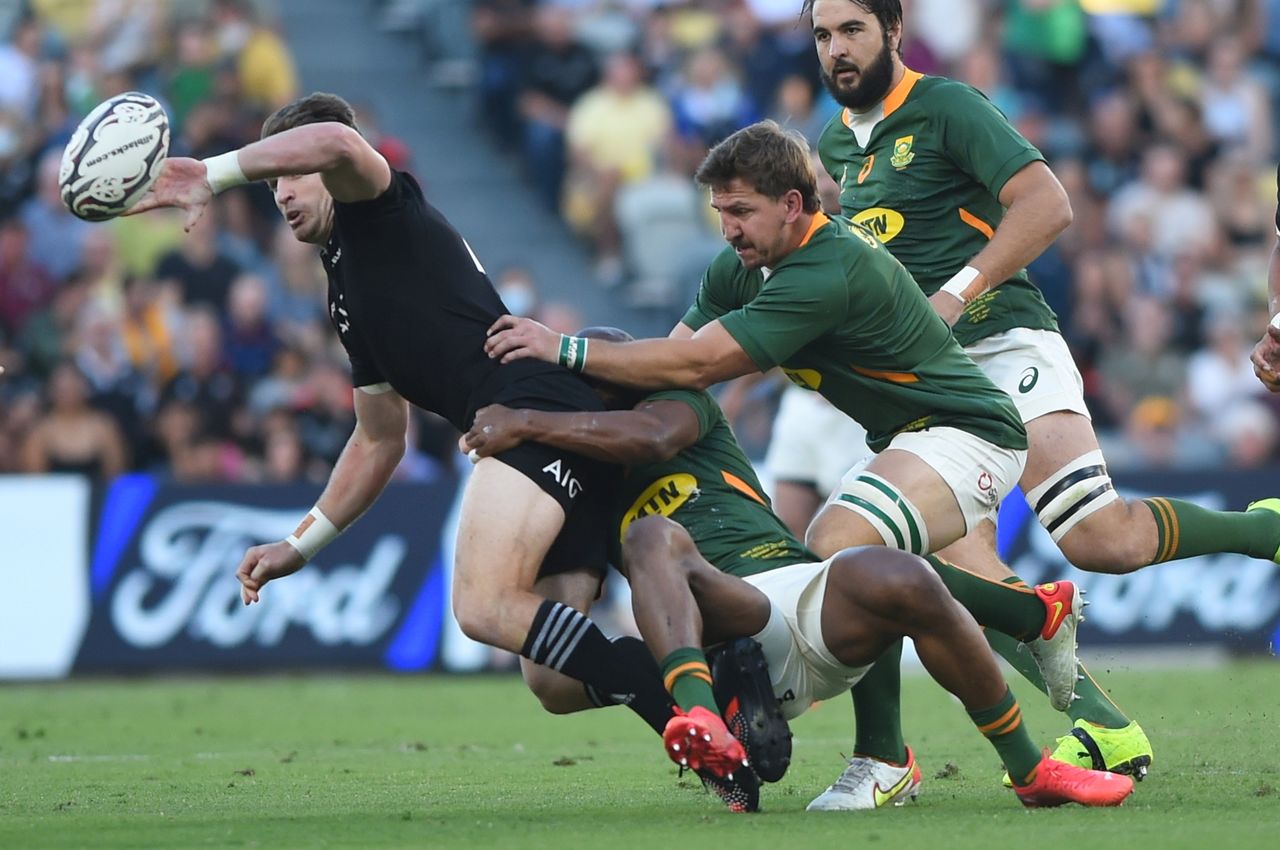 FILE PHOTO: Beauden Barrett of the All Blacks in action during the Rugby Championship Round 5 match between New Zealand All Blacks and South Africa Springboks at Queensland Country Bank Stadium in Townsville, Australia September 25, 2021. AAP/Scott Radford-Chisholm via REUTERS

MELBOURNE (Reuters) - New Zealand will look to cement their claim as top dogs in the southern hemisphere when they close the Rugby Championship against South Africa on Saturday after Argentina seek a face-saving win over Australia at the end of a wretched campaign.

The undefeated All Blacks have already snatched the Springboks' world number one ranking and sealed the title last week with victory over the world champions in Townsville in the 100th test between the sides.

But coach Ian Foster wants no slip-ups on the Gold Coast before they head to the northern hemisphere for the first time in two seasons.

"We want to take the things we learned and apply them."

South Africa, after successive defeats to Australia, were back to their powerful best in the Townsville thriller but still fell short as it came down to a kicking duel.

The ground has shifted beneath their feet against the trans-Tasman teams, and another defeat to New Zealand will place coach Jacques Nienaber under further pressure as their World Cup triumph in Japan shrinks further in the rearview mirror.

For Argentina, a tough tournament took a farcical turn on Thursday when six of their players and two staff members were banned from the final clash against the Wallabies for breaching COVID-19 rules.

Back row enforcer Pablo Matera, stripped of the captaincy during last year's Tri-Nations amid a racism storm, was among the offenders who took an unauthorised day trip to a New South Wales resort and were then barred from returning to the Gold Coast by police at a state border.

Mario Ledesma's Pumas, who have lost all five of their games so far, face a Wallabies side enjoying a rare rush of confidence after upsetting South Africa twice and notching a comfortable 27-8 win over the Argentines.

Australia coach Dave Rennie has granted leave to winger Marika Koroibete and prop Allan Alaalatoa, whose departure paves the way for 38-year-old tighthead Greg Holmes to become the oldest player to represent the Wallabies in a test since World War Two.

It will be a case of 'back to the future' in the back row too, with Sean McMahon set for his first test in four years if sprung from the bench.

After opening the tournament with heavy defeats to the All Blacks, Australia have been transformed by the return of seasoned campaigners, bringing hope to fans two years out from the 2023 World Cup in France.

"We’re certainly a very fit side now and we’ve got genuine competition for places," Rennie said on Thursday.

"But respect is earned daily ... We've got to front again."