Factbox-Key policy issues for Japan ahead of Oct. 31 election 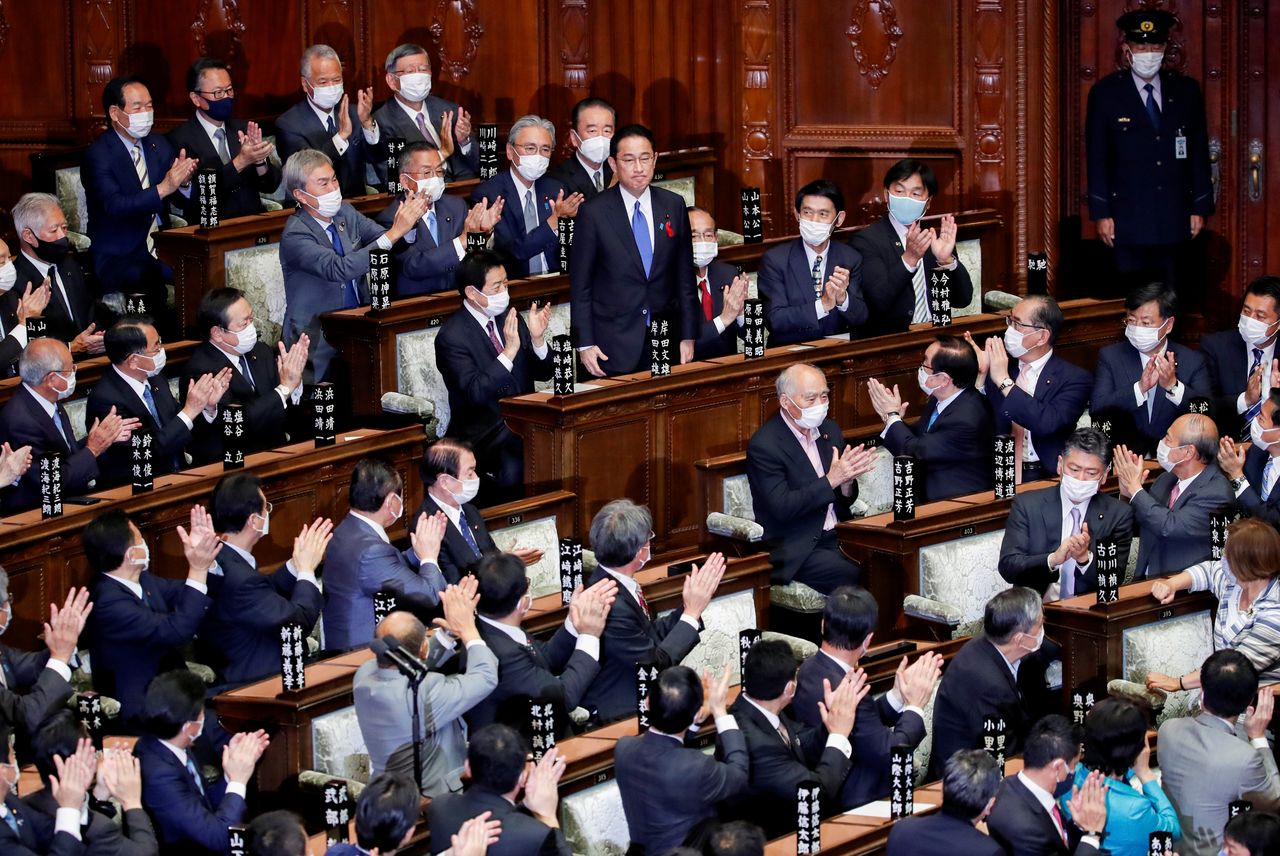 Japan's newly-elected Prime Minister Fumio Kishida is applauded after being chosen as the new prime minister, at the Lower House of Parliament in Tokyo, Japan October 4, 2021. REUTERS/Kim Kyung-Hoon

TOKYO (Reuters) - Within hours of taking office on Monday, Japan's Prime Minister Fumio Kishida called an election for Oct. 31 to seek a mandate from the public, having already obtained backing from powerful factions within the ruling Liberal Democratic Party (LDP).

Here are key policy issues in the upcoming election.

Kishida wants to ensure reliable access to medical services and is promoting remote work, vaccine passports and free testing, while focusing on improving the government's overall response to pandemic outbreaks.

His LDP has promised a stimulus package in the "tens of trillions of yen" by the year-end to help Japan recover from the pandemic.

A recent dramatic fall in infections could work in the ruling coalition's favour in the run-up to the election, but experts have warned of a "sixth wave" that could hit the country over the winter.

Kishida's predecessor, Yoshihide Suga, was pilloried over the slow vaccination rollout and handling of the pandemic, and decided to quit as his approval ratings sank.

Japan's largest opposition party, the Constitutional Democrats (CDPJ), led by Yukio Edano, said Japan should first quash the coronavirus before fully opening up instead of dipping in and out of soft lockdowns. The CDPJ has suggested keeping daily cases in Tokyo below 50 as a target.

Revitalising Japan's pandemic-hit economy remains among the top priorities for the government, which must increasingly rely on fiscal policy as monetary policy is already ultra-loose.

Both ruling and opposition parties have laid out spending plans mainly targeting medical spending and aid to firms and households still suffering from the pandemic's fallout.

In contrast to former premier Shinzo Abe's "Abenomics" stimulus policies focusing on bringing wealth to companies, Kishida wants to distribute more wealth to households in what he calls a new type of "capitalism."

While his proposals are similar to those of left-wing opposition parties, they differ on the approach.

Some opposition lawmakers have called for blanket cash payouts, whereas Kishida wants to target people hit hardest by the pandemic.

He also brushed aside opposition calls for cutting Japan's sales tax. While pledging not to raise the tax for about a decade, Kishida has called for the need to fix the country's finances in the long run.

Kishida has spoken of the importance of Japan's cooperation with the United States and other like-minded countries and followed in his predecessor's footsteps in pledging to achieve a free and open Indo-Pacific region.

But Kishida, traditionally a foreign policy dove, has tacked to the right as he campaigned to lead the LDP, reflecting a broader tilt in the party spurred by former premier Shinzo Abe.

In contrast to the Constitutional Democrats's pacifism, Kishida has said acquiring the ability to strike enemy bases, a controversial step backed by Abe, was a viable option.

Edano's CDPJ has opposed proposals to revise Article 9 of Japan's post-war constitution, which bans a standing military but has been interpreted to allow armed forces exclusively for self defence.

Kishida will likely stick to the previous government's goal of achieving carbon neutrality by 2050 in a country that is currently the world's fifth-biggest CO2 emitter, having struggled to reduce reliance on gas and coal.

Parties remain at loggerheads over what to do with nuclear reactors idled after the 2011 Fukushima disaster, amid safety concerns and public mistrust of the industry.

Kishida has said reactors meeting new regulatory standards should restart and believes in keeping nuclear energy as an option to ensure a stable, affordable energy supply.

Edano's party, however, says Japan should stop using nuclear energy as early as possible, and believes plans for new reactors should be scrapped. They also believe nuclear reactors should not be restarted unless the government has a nuclear accident evacuation plan.