(This Oct.7 story corrects day of peace prize announcement to Friday in paragraph 6)

Ardem Patapoutian and David Julius received the Nobel for medicine on Monday. Giorgio Parisi, Syukuro Manabe and Klaus Hasselmann won the physics gong for their work deciphering chaotic climate, while Benjamin List and David MacMillan received the chemistry accolade for developing a tool for molecule building.

Tanzanian novelist Abdulrazak Gurnah, 72, on Wednesday became only the second writer of color https://www.reuters.com/world/exclusive-update-1-compassion-not-barbed-wire-should-greet-migrants-nobel-winner-2021-10-07 in sub-Suharan Africa ever to win a Nobel Prize for Literature. The last Black recipient of the prize was Toni Morrison in 1993.

"Abdulrazak Gurnah meets at least one of the criterion of a writer from a non-traditional cultural circle - a non-European with a colonial background, but he's no woman," said Anne-Marie Morhed, head of the Swedish Association of Female Academics.

"Two prizes remain, the Peace Prize and the Economy Prize. The (Norwegian) Nobel committee... still have a chance to honor a woman."

Exiled Belarus opposition leader Sviatlana Tsikhanouskaya and Greta Thunberg are at least two women seen to be in contention https://www.reuters.com/world/europe/nobel-peace-prize-is-this-greta-thunbergs-year-2021-10-01 when the Nobel Peace Prize is awarded in Norway on Friday.

There has also been a real push in recent years to not give the prize to only white men from North America and Western Europe, as was the case in the earlier decades.

In comparison to the dozen Black peace laureates in the Nobel's history, there has never been a Black recipient of the prizes for medicine, chemistry and physics, points out Professor Winston Morgan, a toxicologist at the University of East London who has looked at representation in the prizes as part of his research on inequality in the sciences.

"In terms of the gap between the world's population and the winners - the biggest gap is a gender one," Morgan said. "The number of female prize winners is really, really tiny."

Scientists of both genders have already taken to social media to decry the lack of women recognized so far this year.

GenderAvenger, a non-profit group dedicated to advancing women's voices in public dialog, said the prizes https://twitter.com/GenderAvenger/status/1446101809953705987 were "like a terrible mystery where you know the ending halfway through the book. 4 out of 6 categories announced and nary a woman in sight, @NobelPrize. Is the story of the 2021 Nobel Prize that the men did it? (Spoiler: Women are also doing amazing work)."

Some, including Ellie Murray, an assistant professor of epidemiology at Boston University School of Public Health, expressed disappointment https://twitter.com/EpiEllie/status/1445034765841801221 that this year's awards excluded the contributions of Katalin Kariko and Kizzmekia Corbett, key scientists behind the development of mRNA vaccines that are changing the course of the pandemic.

Nobel watchers, however, said it was entirely likely that Kariko and Corbett would be recognized https://www.reuters.com/business/healthcare-pharmaceuticals/nobel-medicine-prize-covid-19-vaccine-it-may-be-too-soon-2021-10-01 in years to come. The committee, they said, tended to reward recipients after a period of time.

"The issue for the Nobel prize is it has a criteria and a tradition and it is hard for them to break away from that," Morgan said, adding that the committee would likely respond to scientific innovation during the pandemic in three or four years.

He added that if you looked at the general trajectory of Nobel prize winners, the number of women scientists was growing as were those given to men from Japan and China.

"We are not seeing that same trajectory for Black scientists. That concerns me more," he said. "You need to ask are there enough black scientists in universities and are they being supported."

Asked why there were so few Black Nobel Prize winners for literature, Gurnah told Reuters the world was changing.

Jesper Haeggstrom, chairman of the Nobel Assembly that awarded the prize in Physiology or Medicine, said there was no simple explanation for the lack of female prize winners, but that it reflected the representation of women in science.

"There has been an under-representation of women historically in science, so the further back in time you look, the fewer female candidates there are," he said.

Haeggstrom declined to say whether gender played a role in the committee's selection process.

"I'm not at liberty to give you any details on this, but in general terms, I can say that scientific competence is the deciding factor," he said. 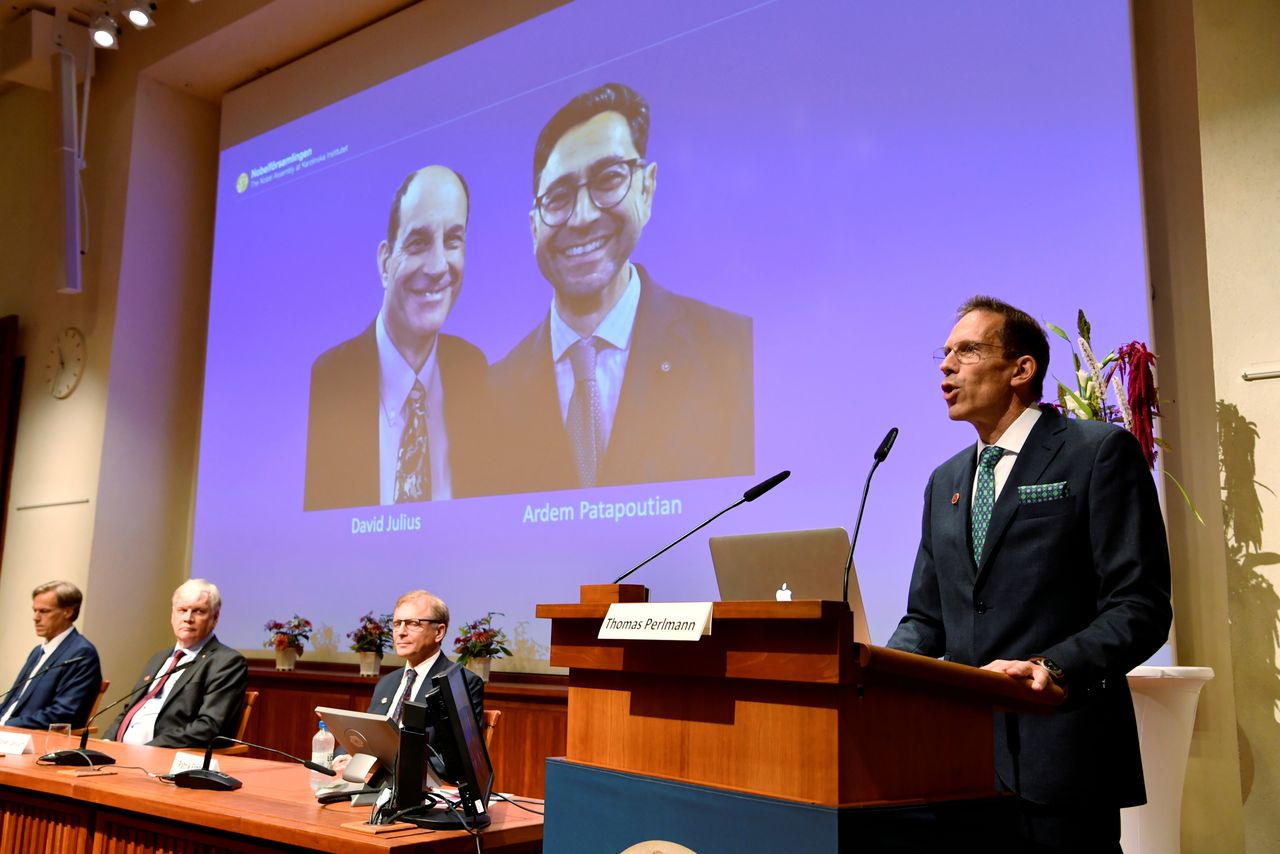 FILE PHOTO: Thomas Perlmann, Secretary of the Nobel Assembly and the Nobel Committee, announces the winners of the 2021 Nobel Prize in Physiology or Medicine David Julius and Ardem Patapoutian (seen on the screen) during a press conference at the Karolinska Institute in Stockholm, Sweden October 4, 2021. TT News Agency/Jessica Gow via 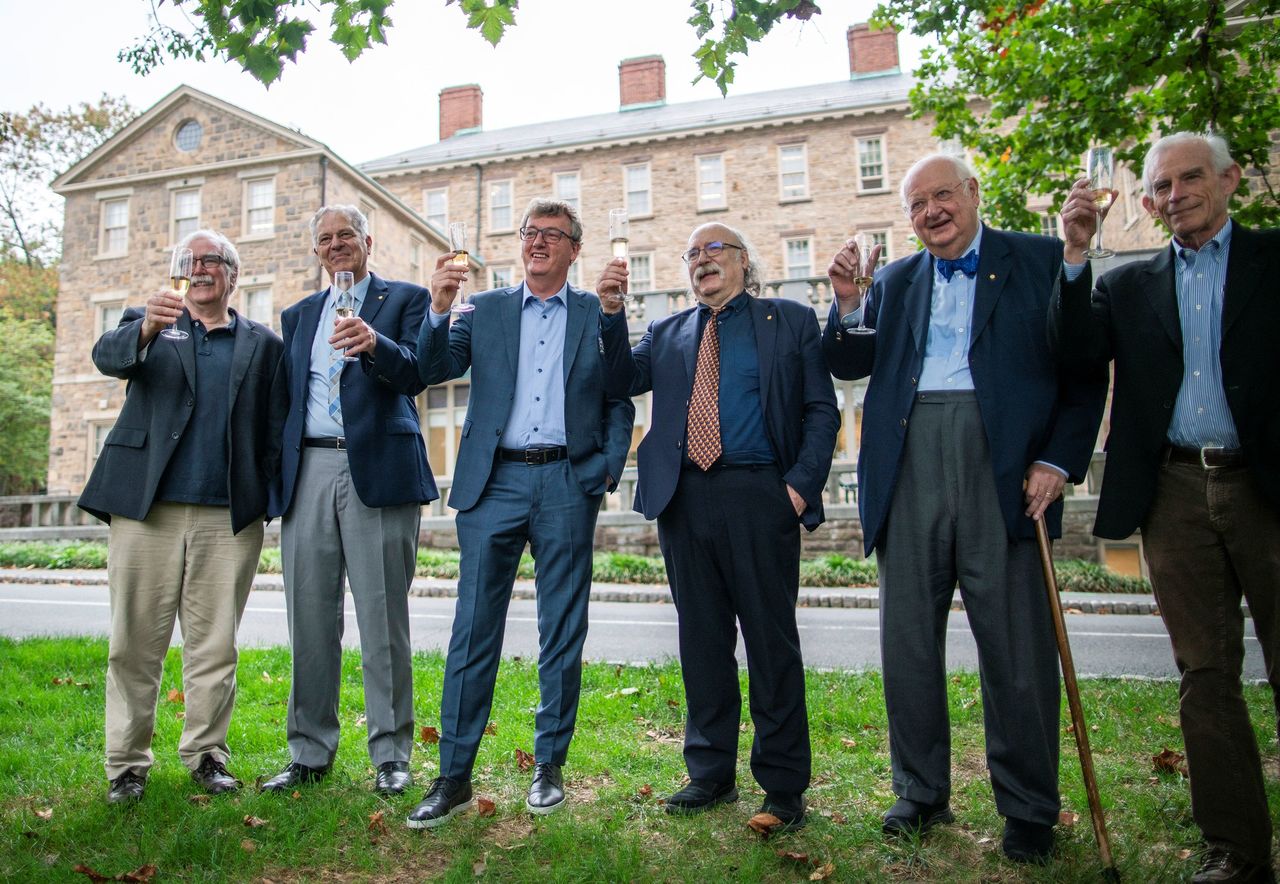 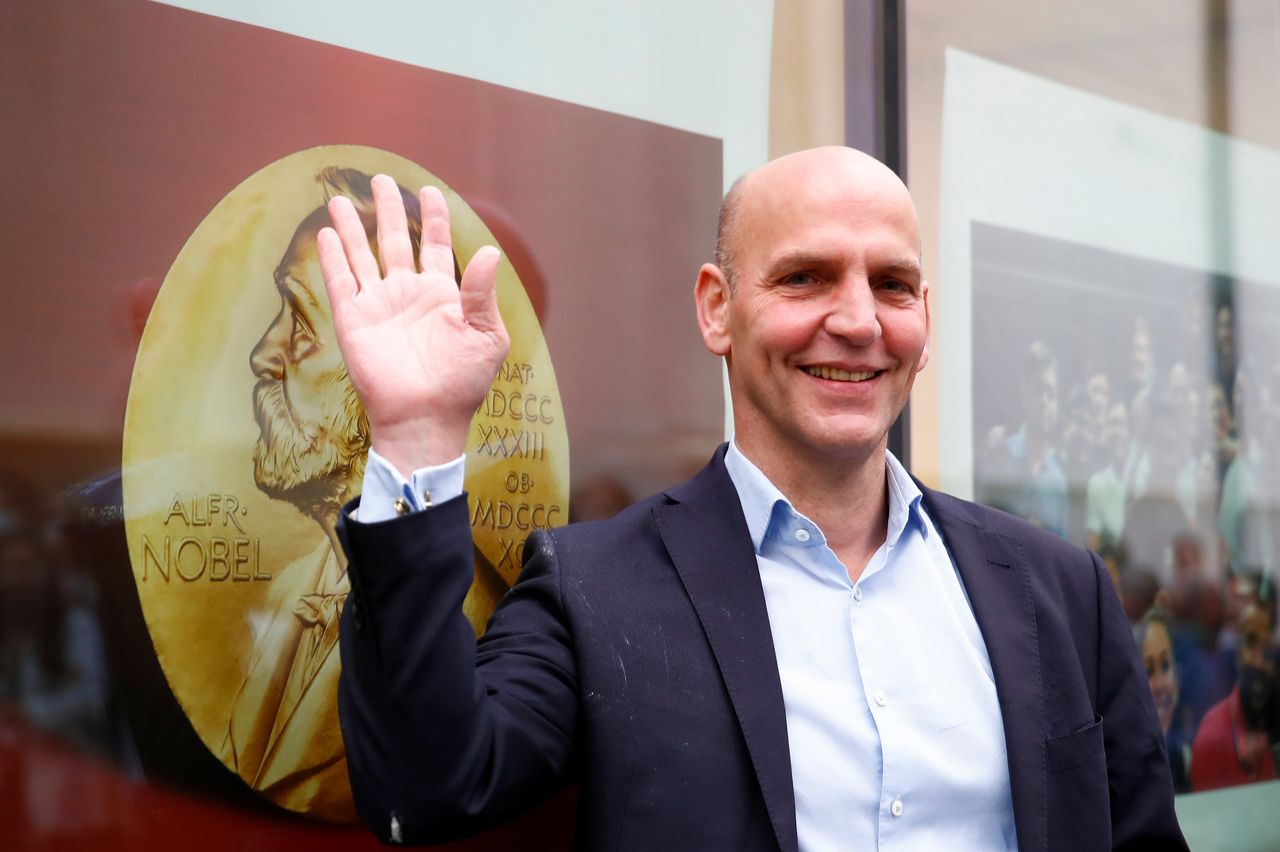 FILE PHOTO: German scientist Benjamin List, who shares the 2021 Nobel Prize in Chemistry together with David MacMillan for the development of asymmetric organocatalysis, poses at the Max-Planck-Institute for Coal Research in Muelheim an der Ruhr, Germany, October 6, 2021. REUTERS/Wolfgang Rattay 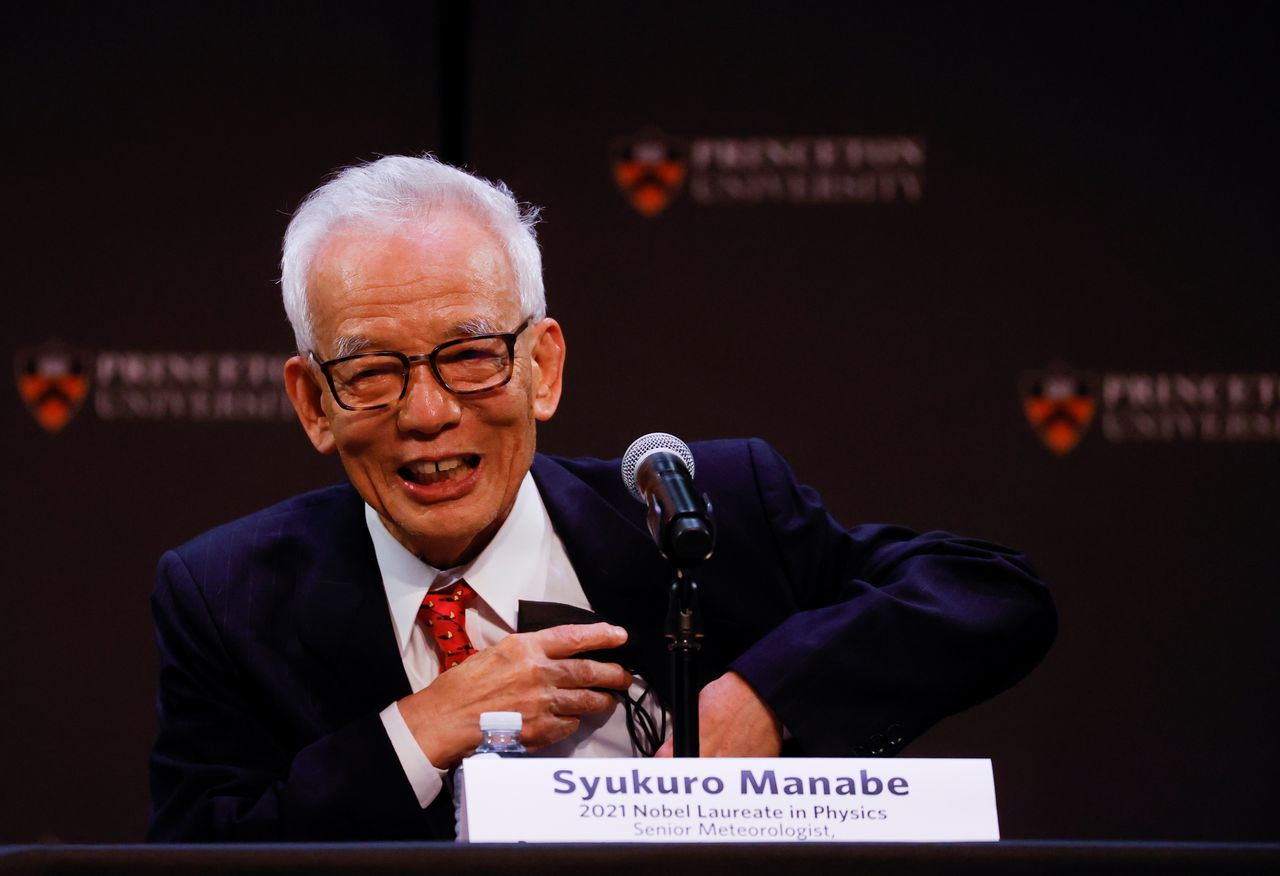 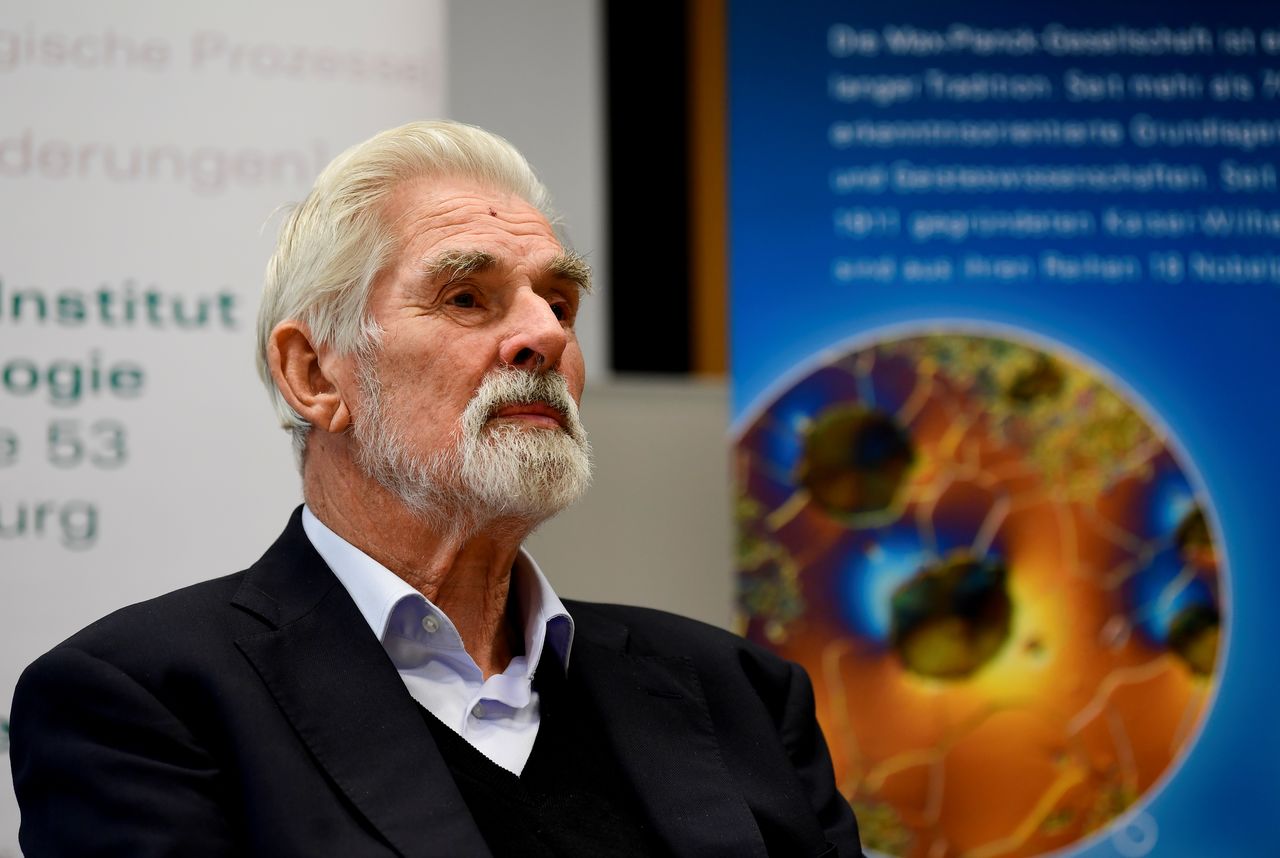 FILE PHOTO: German Klaus Hasselmann looks on as he attends the media after winning the 2021 Nobel Prize in Physics at the Max Planck Institute in Hamburg, Germany, October 5, 2021. Scientists Syukuro Manabe, Klaus Hasselmann and Giorgio Parisi won the 2021 Nobel Prize for Physics for their "groundbreaking contributions to our understanding of complex physical systems," the award-giving body said on Tuesday. REUTERS/Fabian Bimmer 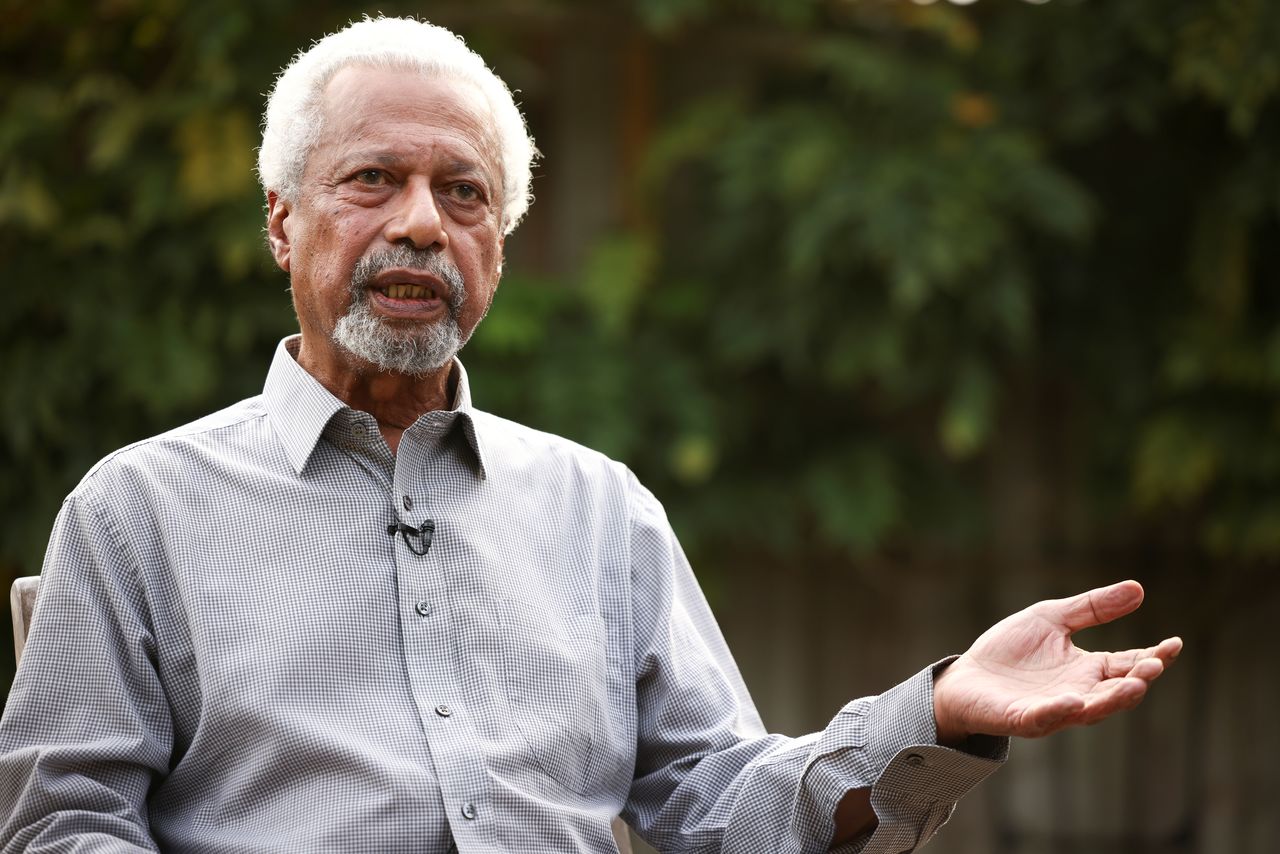 Tanzanian novelist Abdulrazak Gurnah, winner of the 2021 Nobel Prize for Literature, during an interview with Reuters at his home in Canterbury, Britain, October 7, 2021. REUTERS/Henry Nicholls