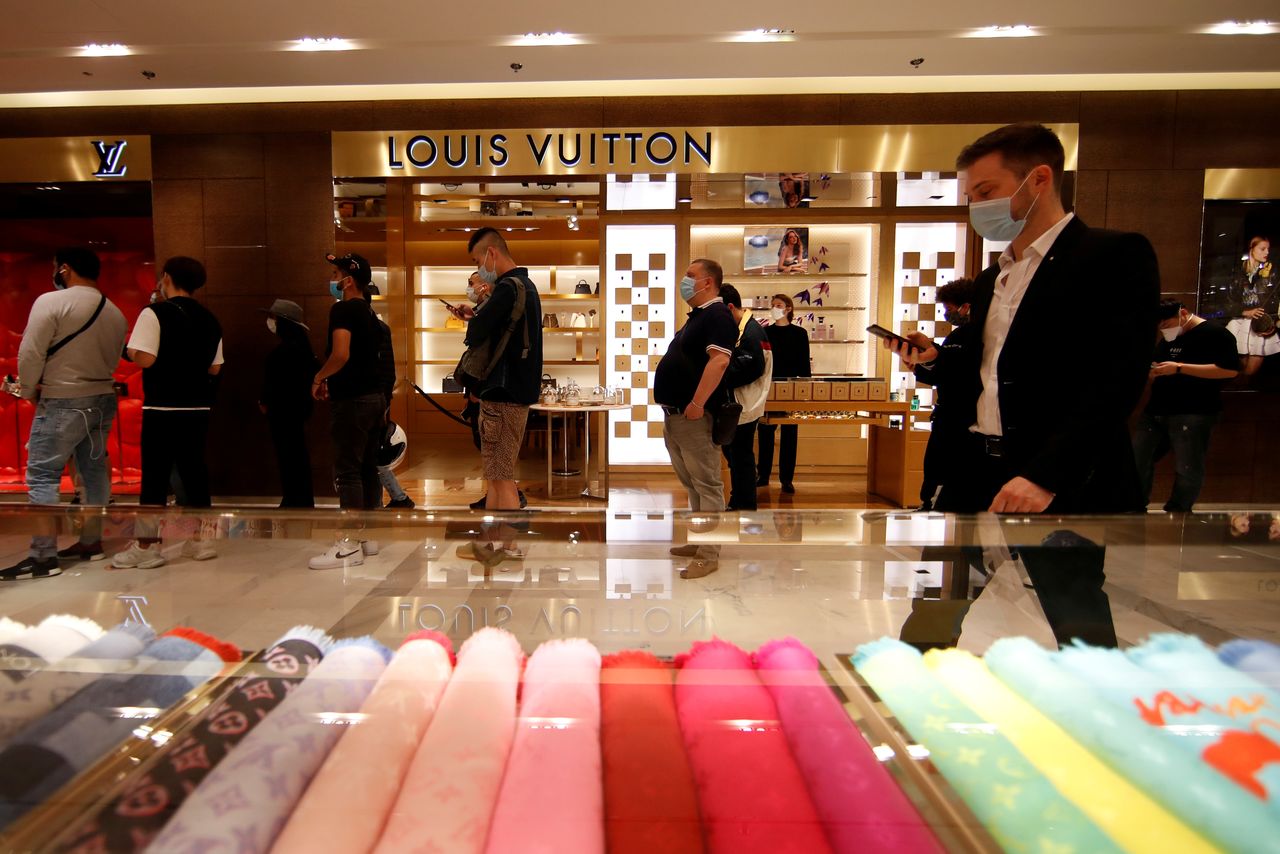 FILE PHOTO: Clients, wearing protective face masks, queue in line in front of a Louis Vuitton shop inside the department store Le Printemps Haussmann in Paris following the outbreak of the coronavirus disease (COVID-19) in France, May 28, 2020. REUTERS/Gonzalo Fuentes

PARIS (Reuters) -Sales at French luxury group LVMH's fashion and leather goods division rose strongly in the third quarter even though overall revenue growth in Asia and the United States eased from their stellar first-half performance.

LVMH, whose luxury products span Moët & Chandon champagne and Bulgari timepieces, said on Tuesday the popularity of its star labels Louis Vuitton and Dior helped its fashion and leather goods division, which accounts for nearly half of group sales, to report 24% growth.

Revenues for this business at the end of the quarter were 38% above their pre-pandemic, 2019 level, the same rate as in the first half.

The luxury goods industry has bounced back strongly from the health crisis, even if international travel, a key growth driver in pre-pandemic times, has not fully resumed.

LVMH chief financial officer Jean-Jacques Guiony said revenue growth in Asia had been under pressure in August due to anti-coronavirus restrictions being partially re-imposed in some countries but said the group had not noticed a change in consumer behavior in China.

A call by China’s President Xi Jinping in August for "common prosperity" and wealth redistribution had prompted investors' to worry that Beijing might promote measures aimed at reducing the country’s wealth gap, curbing high-end consumption in the world's largest luxury market.

"We don’t see any reason that this could be detrimental to the upper middle class that is the bulk of our customer base," Guiony said.

Luca Solca, analyst at Bernstein, was positive on the strong revenue performance at the fashion and leather goods business.

"We believe this should comes as a relief to investors, especially after the August wobble in the sector and doubts on Chinese demand trends and even if other divisions reduce their growth versus 2019 in the third quarter.”

The company's performance showed a marked improvement in Europe in the third quarter, even without deep-pocketed visitors from Asia, as local travel resumed over the summer.

Guiony said the group had no supply chain issues given its manufacturing is largely based in Europe and also brushed off concerns about rising shipping costs, noting that the group has sufficient margins to cope.

Overall Like-for-like sales, stripping out the effect of foreign exchange fluctuations, rose by 20% to 15.51 billion euros ($17.90 billion) in the three months to September.

Growth was roughly in line with an analyst consensus forecast for a 21% rise.

Guiony said the company would continue to focus on broadening the appeal of its blockbuster acquisition, U.S. jeweller Tiffany, by refocusing its product assortment and ongoing marketing efforts.

LVMH has been rebranding the jeweller with an eye to attracting younger consumers, projecting a campaign starring Beyonce and Jay-Z on digital billboards in New York City’s Times Square and creating buzz on social media with K-pop star Rose.