TOKYO (Reuters) - In 50 years running a cafe in Tokyo, Shizuo Mori can't remember a time when his coffee supplies cost this much.

The 78-year-old, who owns Heckeln, an old-school coffee shop in Tokyo's Toranomon business district, says the wholesale cost of his main product has surged 5% in the last three months.

That is a jolting experience for a country where weak growth has meant that prices of many things - including wages - haven't risen much in decades.

While he has not yet passed on the increase to his customers - coffee at his cramped shop costs 400 yen ($3.50) a cup - price pressures are squeezing his bottom line and he knows his regulars have low tolerance for such hikes.

"Salarymen don't get paid a lot, so everyone will stop drinking if prices are too high," said Mori, whose shop is famous for its caramel sauce pudding, slabs of buttered toast and ham and egg sandwiches.

Across Japan, consumers and businesses like Heckeln are facing sticker shock for everything from coffee, beef bowls and other items whose prices have barely budged during the country's decades of deflation.

Although Japan's inflation is still modest by global standards, surging raw material costs https://www.reuters.com/world/asia-pacific/japan-wholesale-inflation-spikes-squeezing-corporate-profits-2021-10-12 have made it almost impossible for firms in the world's third-largest economy not to pass on wholesale price hikes, something they have typically resisted for fear of losing business.

For younger Japanese, many with no memory of significant prices hikes, that has come as a rude surprise especially as households, workers and businesses struggle to shake off the economic hit from the pandemic.

"It's terrible - incomes haven't changed. Taxes are rising. People are increasingly becoming poor," said Yuka Urakawa, 23, who works in the beauty industry and was going for a noodle dinner near Tokyo's Yurakucho station.

Like many on social media, she has noticed changes to prices of beef bowls at restaurant chains like Matsuya Foods.

At most of its outlets, Matsuya has stopped selling its 380 yen "premium" beef bowl and started offering regular bowls using cheaper ingredients such as frozen beef and Chinese spring onions for the same price.

Dairy products maker Meiji Holdings has hiked prices of its margarines by up to 12.8%, the first increase since 2008, and other food companies have also raised prices on their main product lines for the first time in years.

While not necessarily welcomed by consumers, the trend may be starting to nudge the way Japanese perceive the prices they pay for staples https://www.reuters.com/world/asia-pacific/more-japan-households-see-higher-inflation-year-now-boj-survey-2021-10-11.

"It feels like Japan's prices were too cheap for too long compared to other countries," said Nozomi Yuasa, 28, who was also having dinner near Yurakucho station and has noticed price rises in eggs, dairy and candy.

While reviving stagnant consumer prices has been the central bank's main objective for years, its strategy has been to do so by stoking demand. Inflation caused by constrained supply, on the other hand, is unwelcome, especially if it's not matched by increased wages.

Aware of households' sensitivity to price hikes, some firms are treading carefully. Aeon Co Ltd, Japan's largest retailer by sales, said it won't raise prices on about 3,000 products of its own brand Topvalu products this year, instead seeking to keep cost low in part by bulk-buying.

"If there are price rises, it'll result in lower demand." 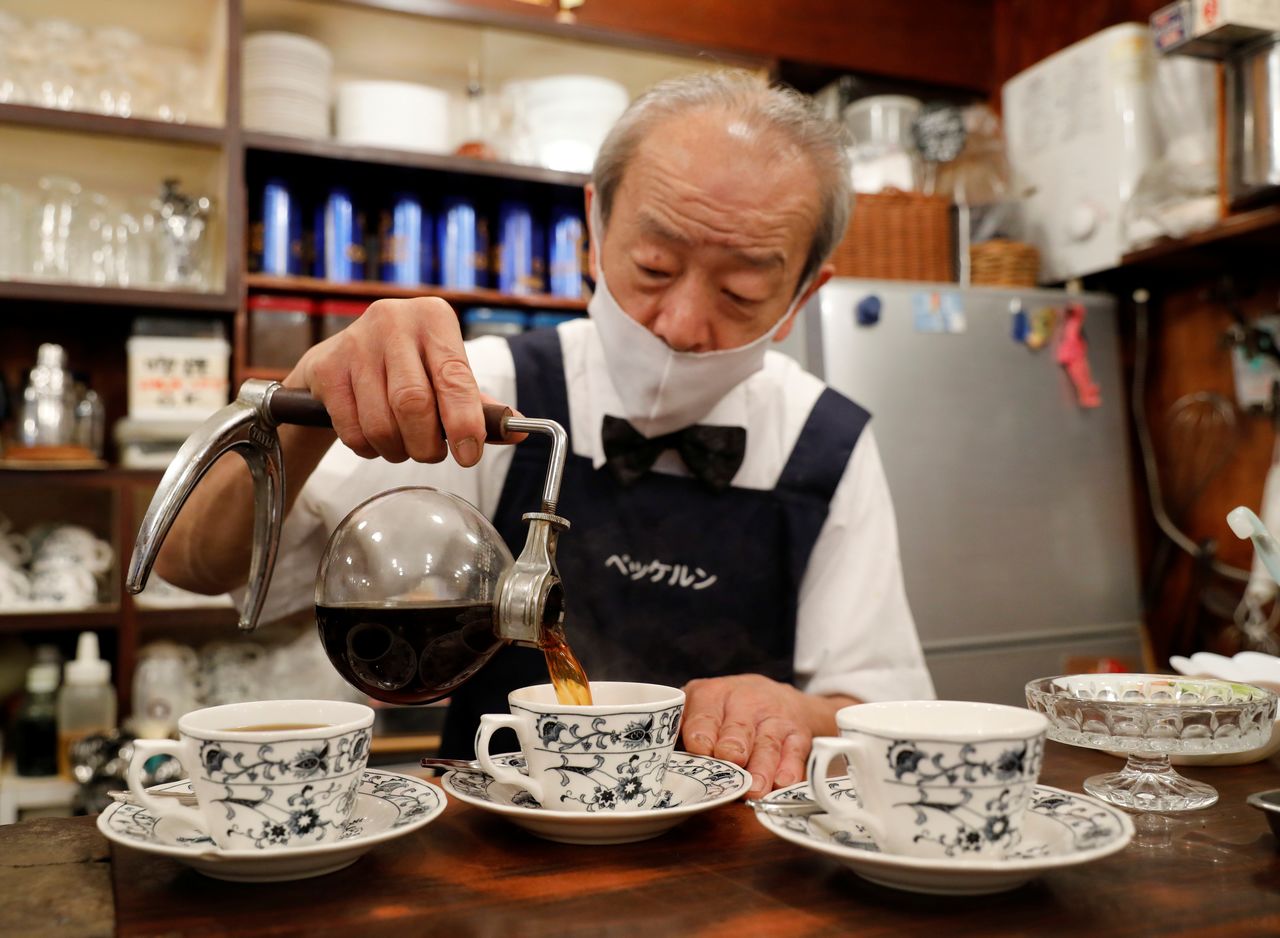 Shizuo Mori, the owner of Heckeln coffee shop pours coffee into a cup after brewing coffee with a Syphon coffee maker at his shop in Tokyo, Japan, October 8, 2021. REUTERS/Kim Kyung-Hoon 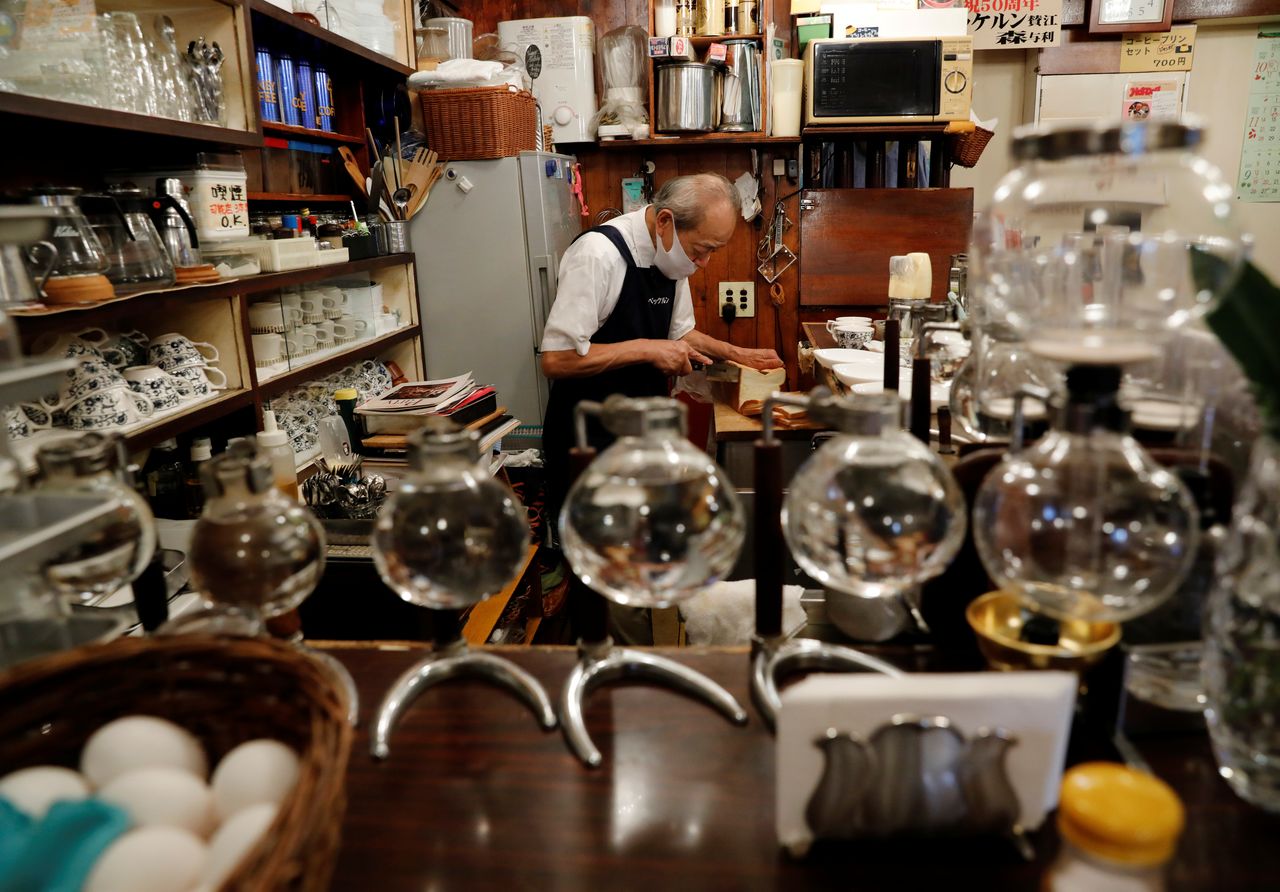 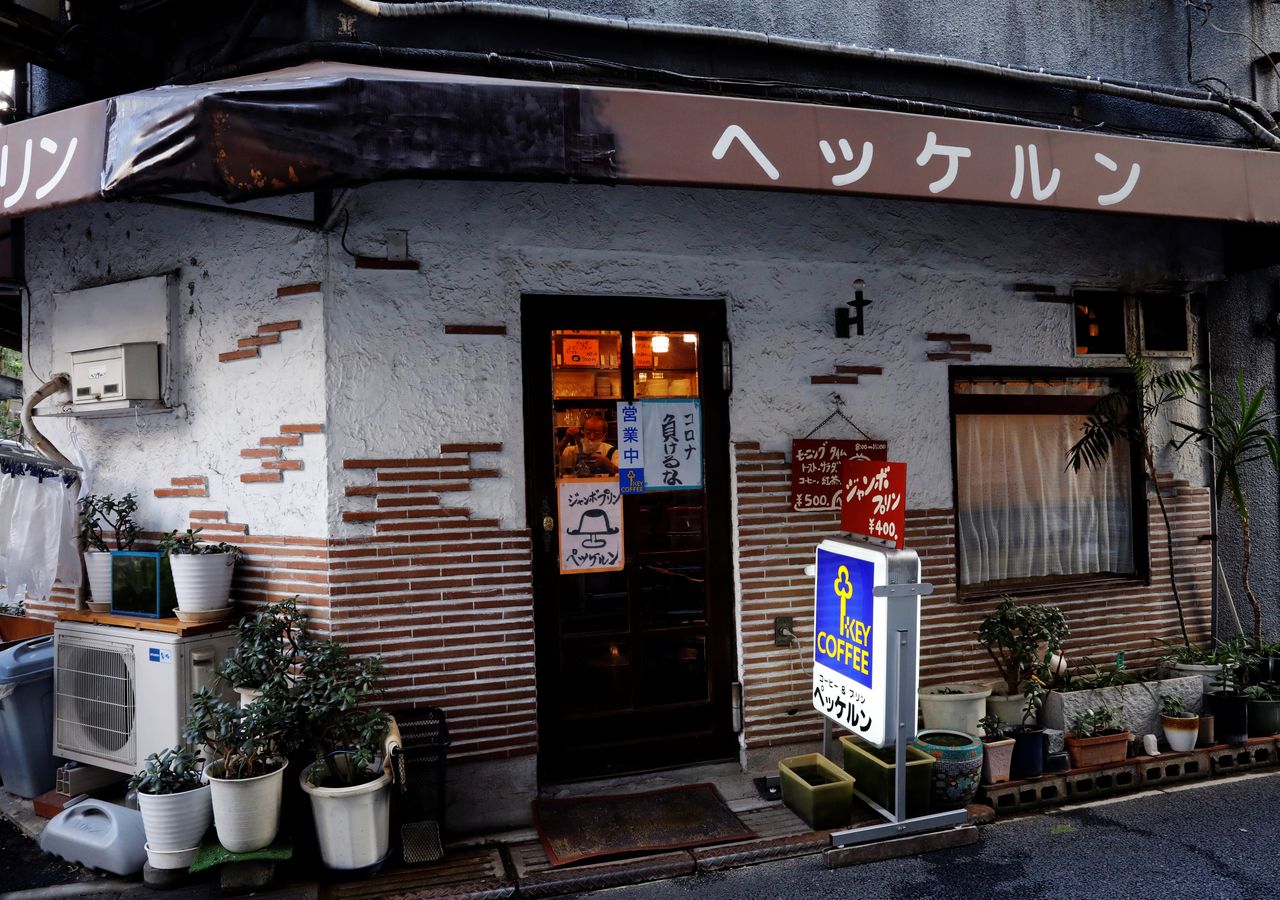 Shizuo Mori, the owner of Heckeln coffee shop is seen through a window of a door while he brews coffee at his shop in Tokyo, Japan, October 8, 2021. REUTERS/Kim Kyung-Hoon 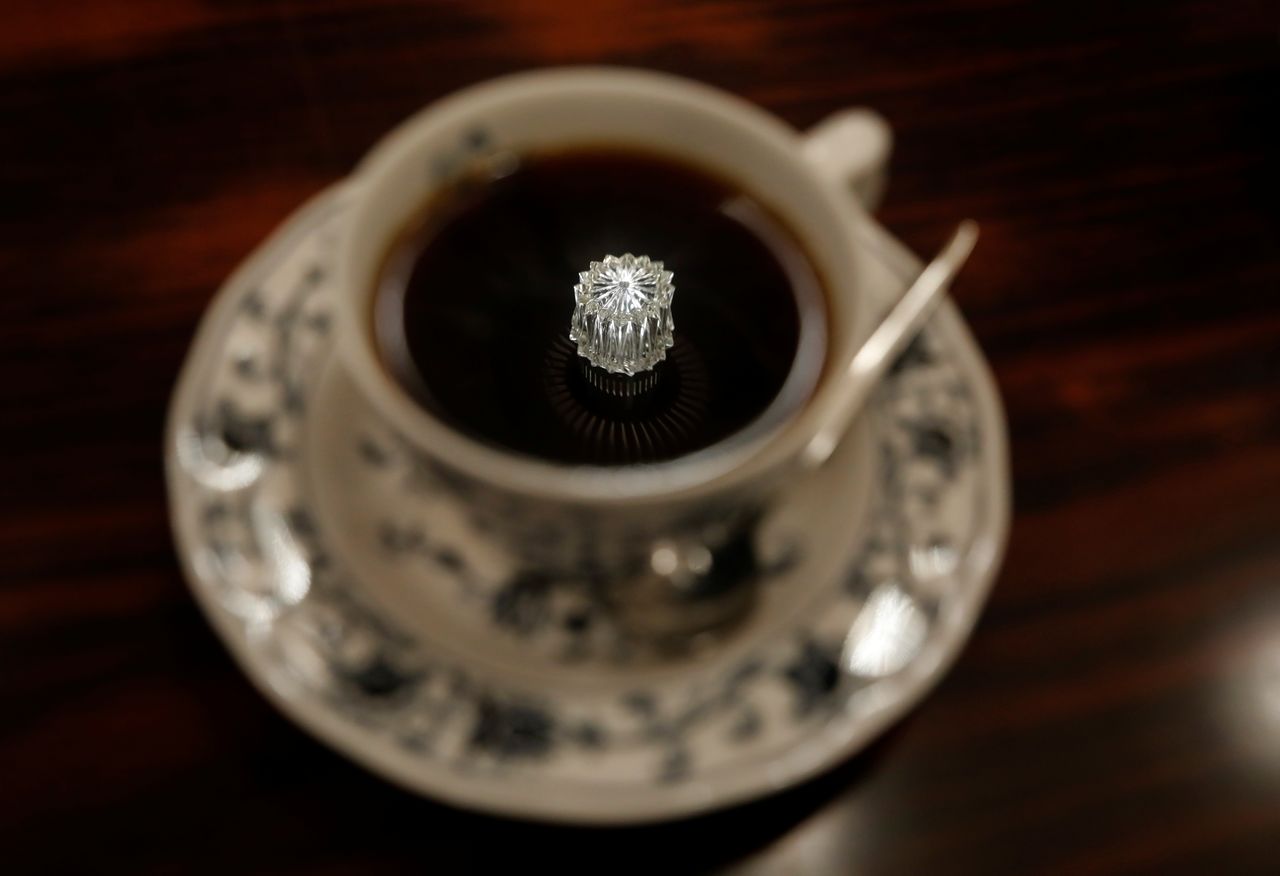 A jewelry-shaped lamp on the ceiling is reflected on a cup of coffee at Shizuo Mori's Heckeln coffee shop in Tokyo, Japan, October 8, 2021. REUTERS/Kim Kyung-Hoon 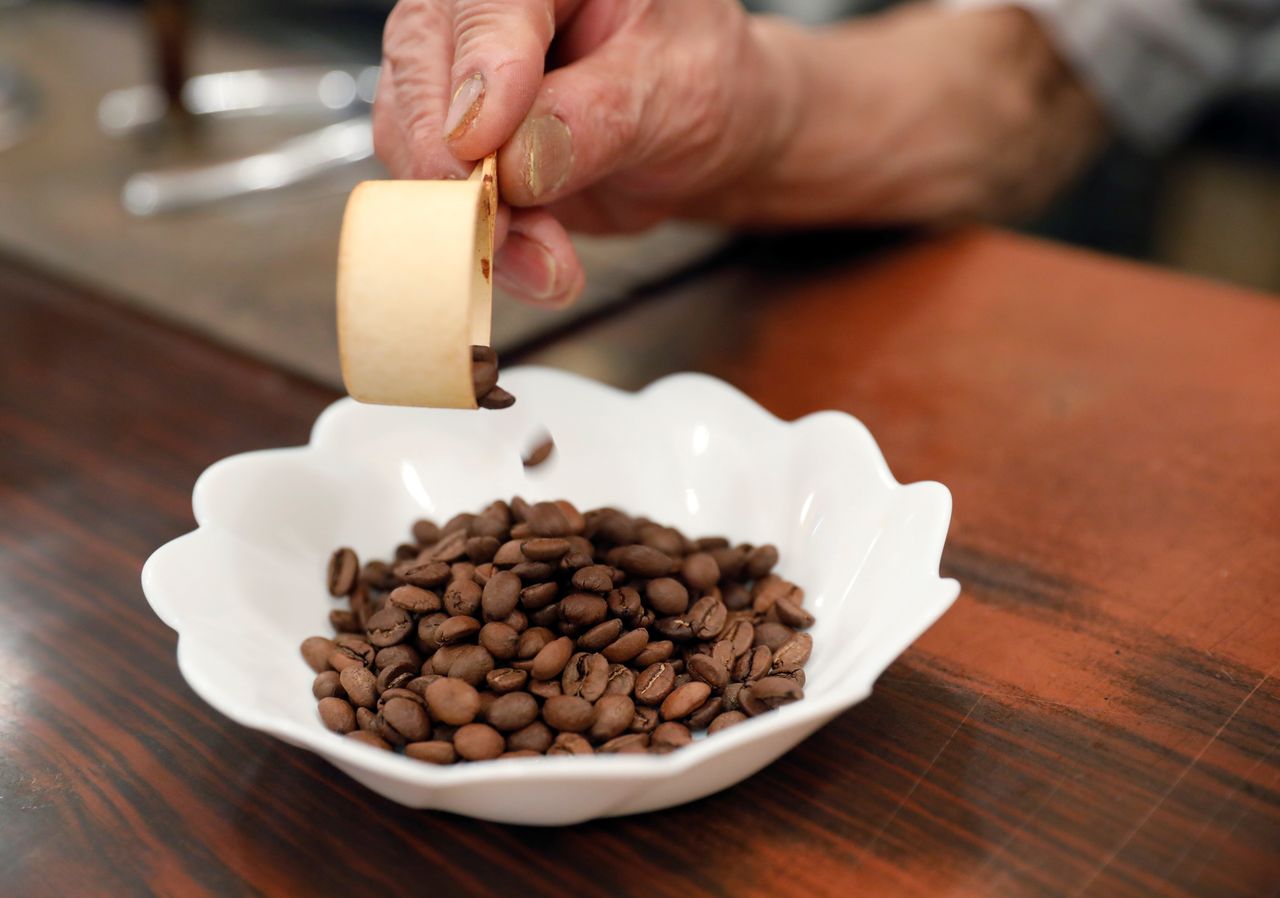