LONDON/TOKYO (Reuters) - From beef bowls in Tokyo to fried chicken in London, consumers are starting to feel the pinch from the surge in costs coursing through the global economy.

The rebound as coronavirus restrictions are eased has exposed supply chain shortages, with firms scrambling for workers, ships and even fuel to power factories, threatening the fledgling economic recovery.

"The days when you could feed a family of four with a 3 pound ($4) chicken are coming to an end," Ranjit Singh Boparan, owner of the 2 Sisters Group, said.

Shortages of warehouse workers, truckers and butchers as the world's fifth-largest economy deals with Brexit as well as COVID is exacerbating strains being felt globally by international business.

Jon Abrahamsson, chief executive at Inter IKEA, told Reuters IKEA warns supply chain disruptions likely to last into 2022 he expects the crisis to extend into 2022, with the biggest challenge getting goods out of China, where around a quarter of IKEA products are made.

IKEA said stores in North America have been hardest hit by product shortages, followed by Europe.

In the United States, President Joe Biden on Wednesday urged the private sector to help ease blockages that are threatening to disrupt the U.S. holiday season.

Biden said the Port of Los Angeles would join the Port of Long Beach in working round-the-clock to unload about 500,000 containers, while Walmart, Target and other big retailers would expand overnight operations to help out.

Even in Japan, where weak growth has meant that prices of many things - as well as wages - have not risen much in decades, consumers and businesses are facing a price shock for basics such as coffee and beef bowls.

With central bankers on high alert and inflation in Spain, Ireland and Sweden hitting 13-year highs, European Central Bank President Christine Lagarde repeated that the upswing in Europe is seen as temporary and said there were no signs of it becoming embedded in wages.

"The impact of these factors should fade out ... in the course of next year, dampening annual inflation," Lagarde said.

Euro zone inflation is expected to hit 4% before the end of the year, twice the ECB's target, and a growing number of economists see it remaining above target throughout 2022.

Dwindling power supplies suggest a bleak winter outlook in some parts of the world.

As northern China chills, coal prices held near record highs, with power plants stocking up to ease an energy crunch that sent factory gate inflation in the world's second-largest economy to an at-least 25 year high in September.

Weak demand is capping consumer inflation, however, forcing policymakers to walk a tightrope between supporting the economy and further stoking producer prices.

There are few signs of any energy cost reprieve, with Brent crude oil futures above $84 a barrel on expectations that soaring natural gas prices will drive a switch to oil to meet winter heating needs.

The International Energy Agency said the crunch could boost oil demand by half a million barrels per day (bpd).

"Higher energy prices are also adding to inflationary pressures that, along with power outages, could lead to lower industrial activity and a slowdown in the economic recovery," the IEA said in its monthly oil report.

German government and industry sources told Reuters on Thursday that the government plans to ease the pressure on consumers from rising energy bills by cutting the surcharge which helps fund renewable energy investment by 43% next year.

And in Singapore two energy providers, including one of the largest independents, are exiting the market while at least three others have stopped accepting new clients due to rocketing wholesale energy prices, company sources told Reuters.

Meanwhile, the White House has been speaking with U.S. oil and gas producers about helping to bring down fuel costs, two sources familiar with the matter said.

The average U.S. retail cost of a gallon of gasoline is at a seven-year high, and winter fuel costs are forecast to surge.

Dutch navigation and digital mapping company TomTom warned that supply chain problems in the auto sector could last well into 2022.

"Collectively we have underestimated how big the supply chain issues, and especially for semiconductor shortages, have been or have become", TomTom Chief Financial Officer Taco Titulaer told Reuters.

Soaring demand is, however, proving a boon for some.

TSMC and Taiwan have become central to efforts to resolve the global chip shortage, which has also hit manufacturers of smartphones, laptops and consumer appliances.

Some companies, such as Toyota Motor Corp are intensifying efforts to restart production. The Japanese carmaker hopes to do so in December with a rebound in shipments from pandemic-hit suppliers, three sources told Reuters. 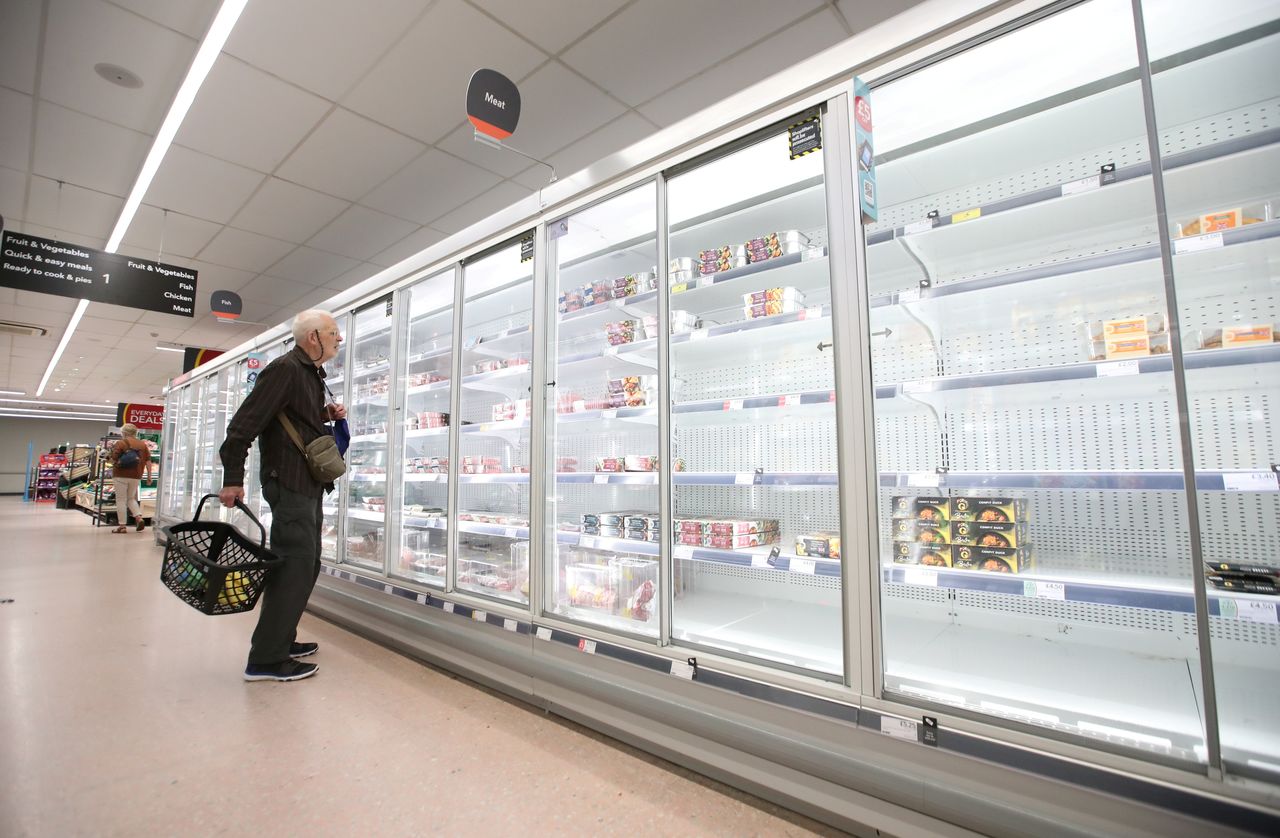 A shopper looks at produce and empty shelves of the meat aisle in Co-Op supermarket, Harpenden, Britain, September 22, 2021. REUTERS/Peter Cziborra 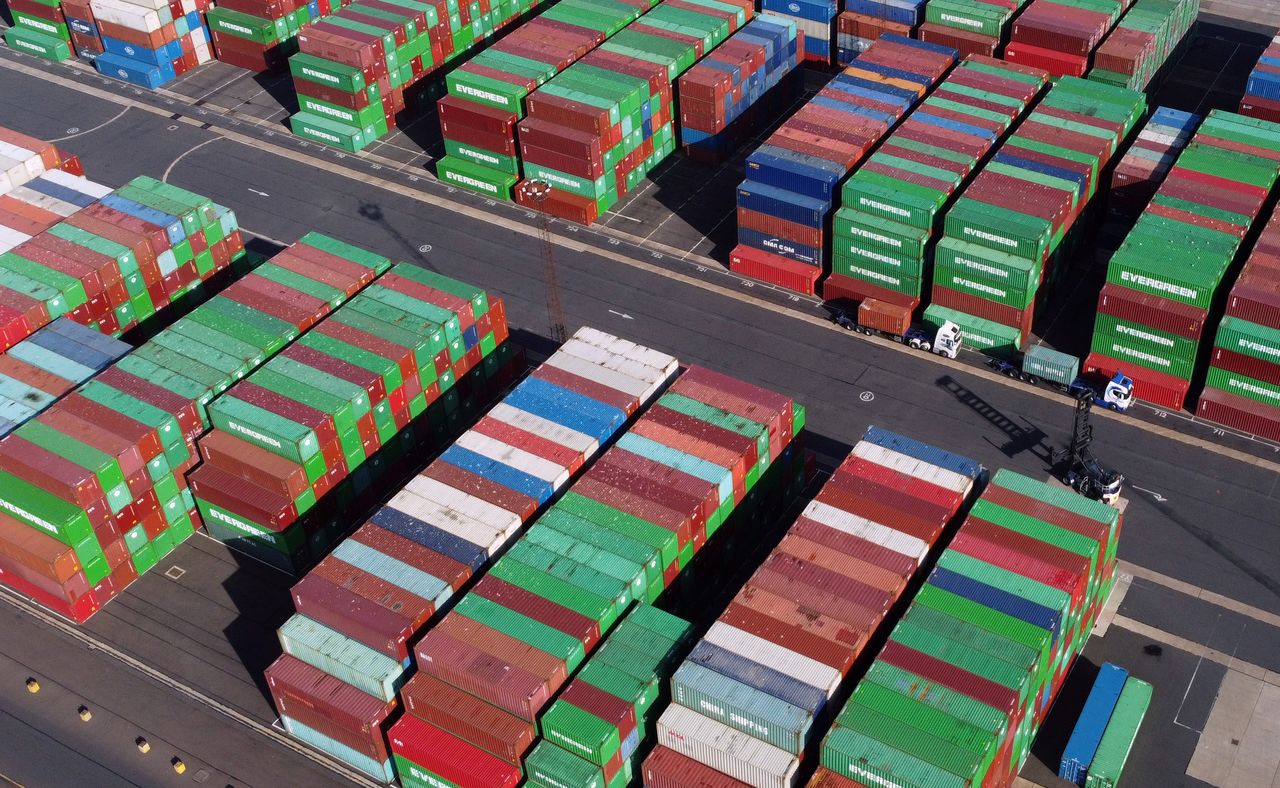 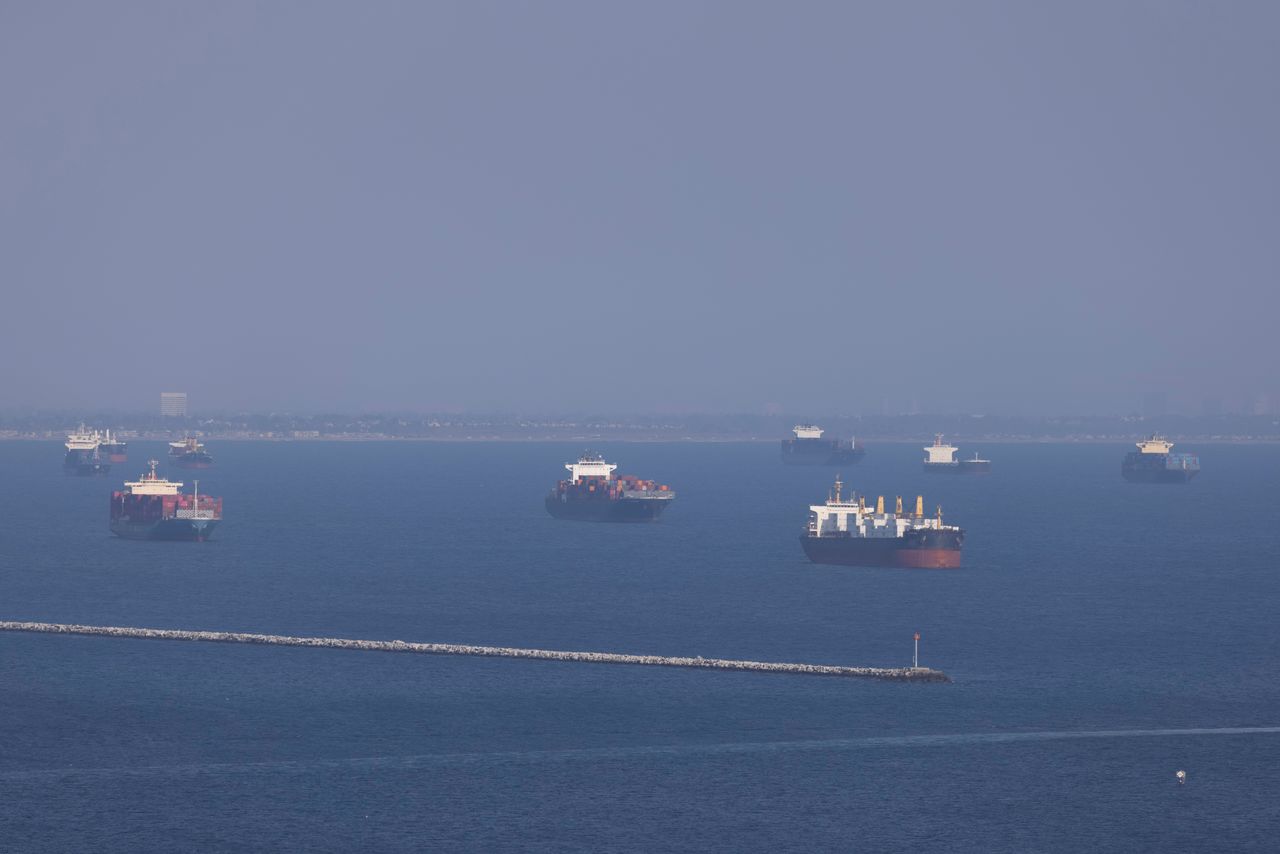 Container ships wait off the coast of the congested ports of Los Angeles and Long Beach, in Long Beach, California, September 29, 2021. REUTERS/Mike Blake 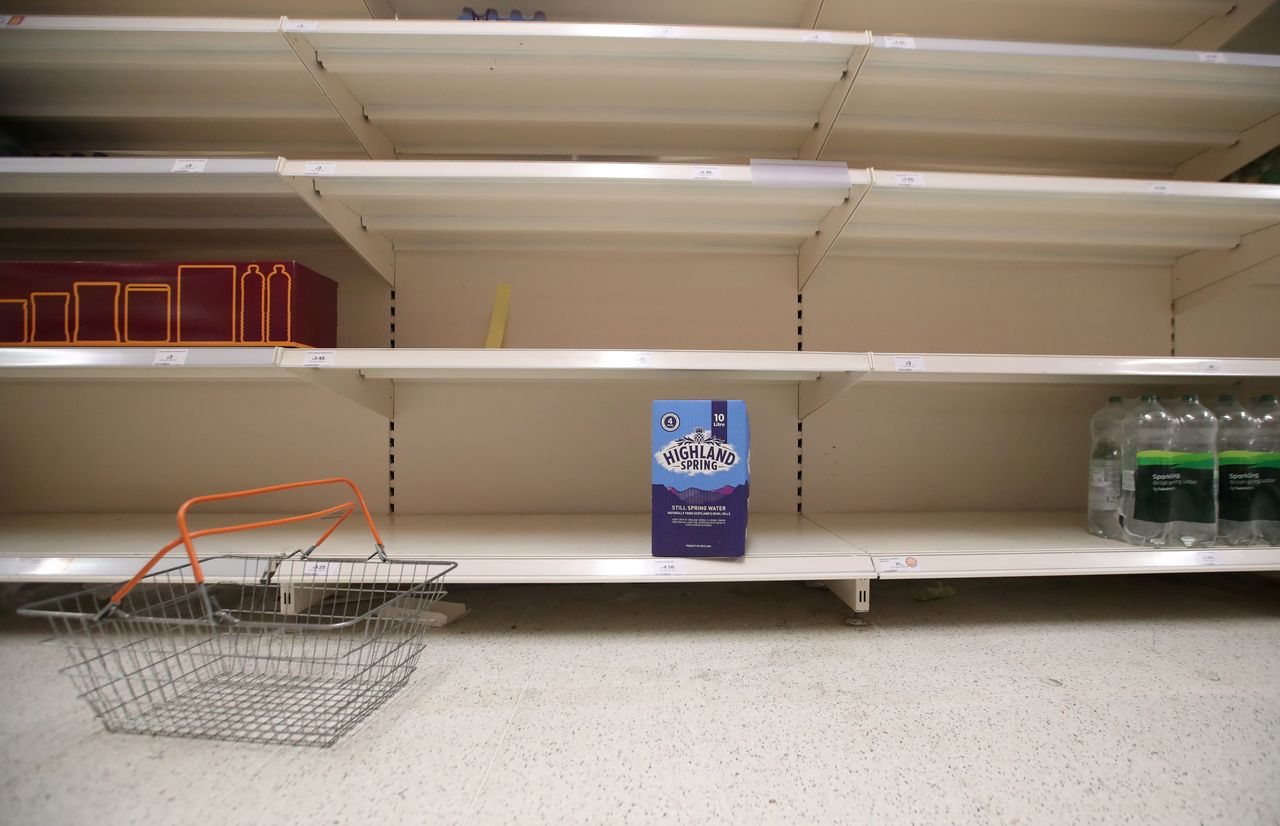 A shopping basket is discarded next to empty shelves of the soft drinks aisle, in Sainsbury's supermarket in Harpenden, Britain, September 22, 2021. REUTERS/Peter Cziborra 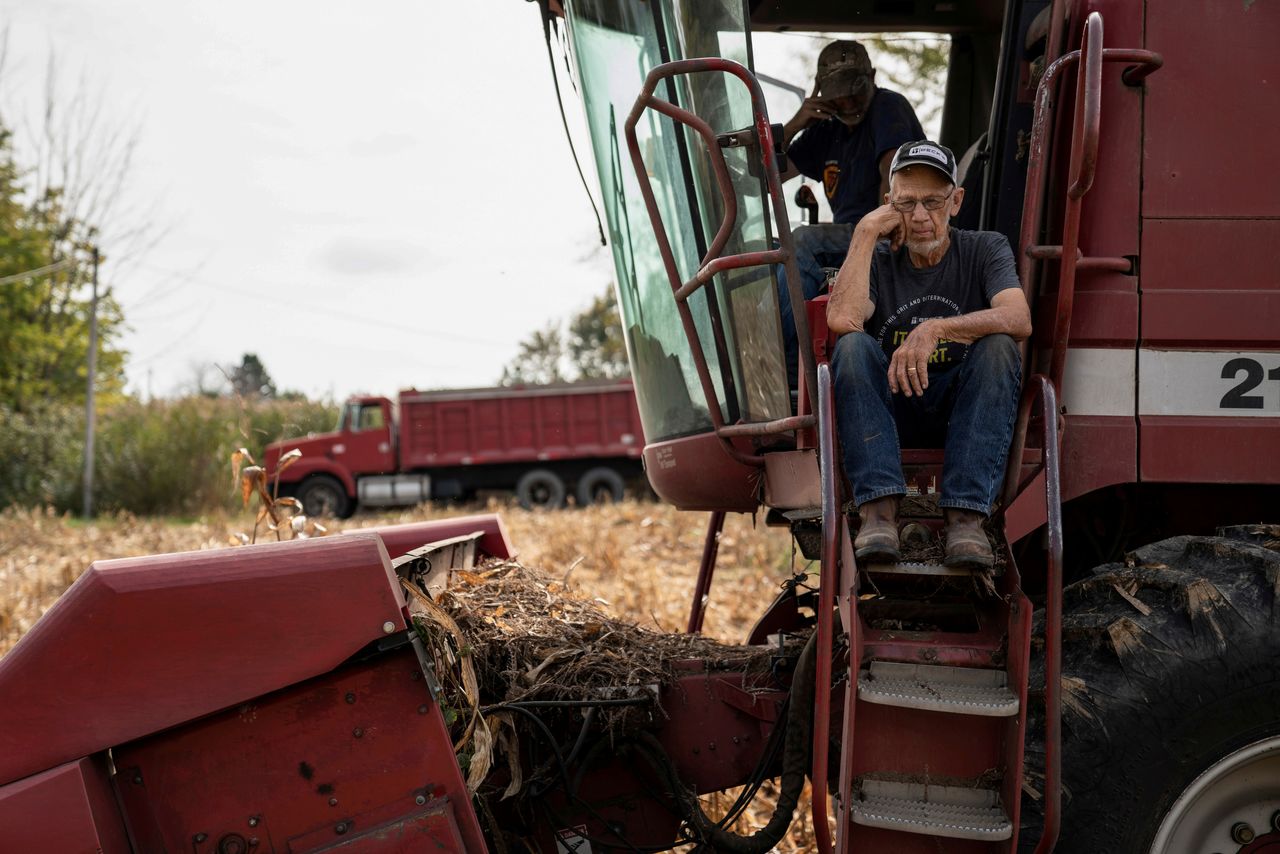 Dale Nething, 86, waits on the steps as his son Don Nething, 62, troubleshoots the combine harvester after it broke down while being used to harvest corn in Ravenna, Ohio, October 11, 2021. Manufacturing meltdowns are hitting the U.S. heartland, as the semiconductor shortages that have plagued equipment makers for months expand into other components. Supply chain woes now pose a threat to the U.S. food supply and farmers' ability to get crops out of fields. REUTERS/Dane Rhys 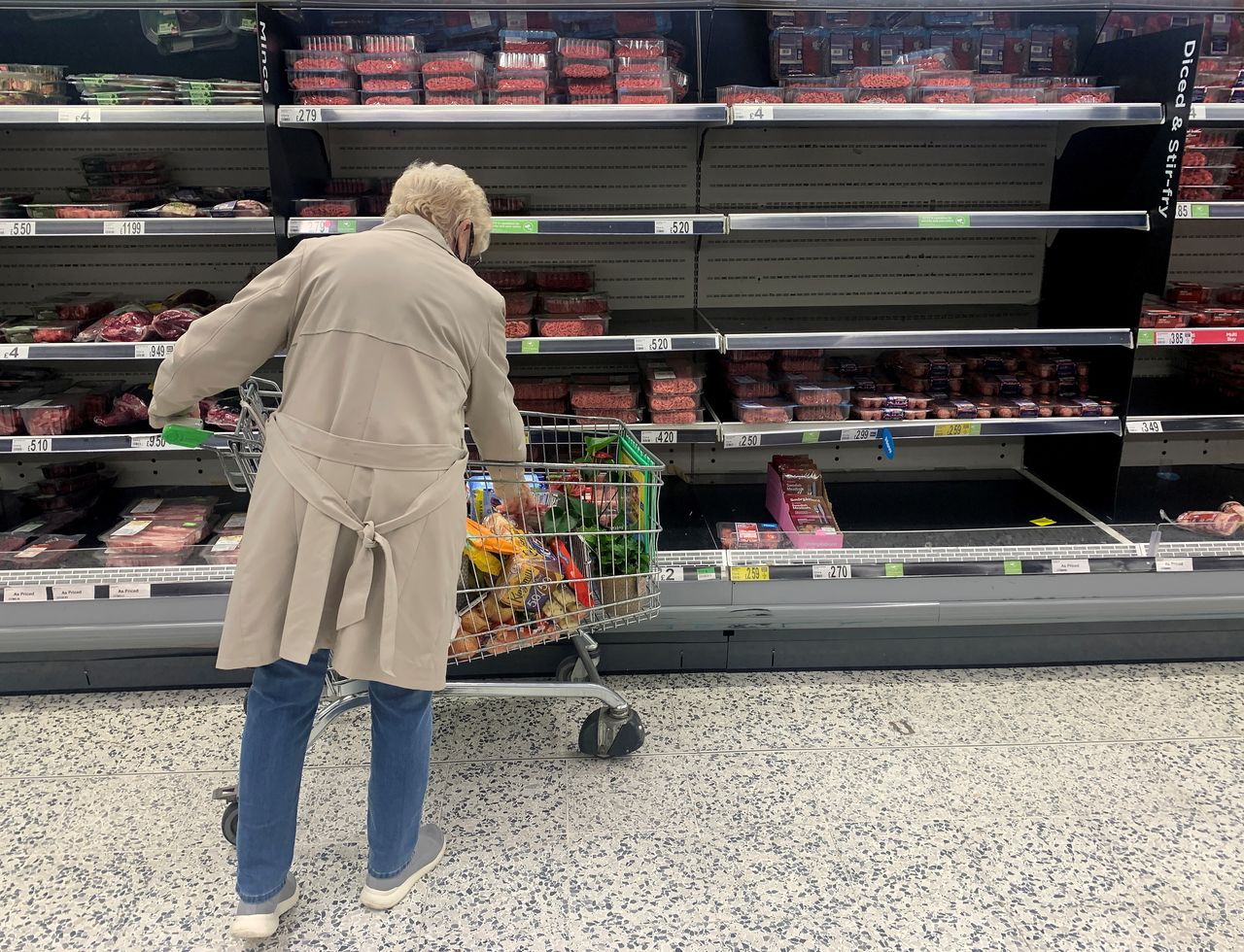 A shopper stands in front of empty shelves in the meat aisle of a supermarket in Liverpool, Britain, September 20, 2021. REUTERS/Phil Noble