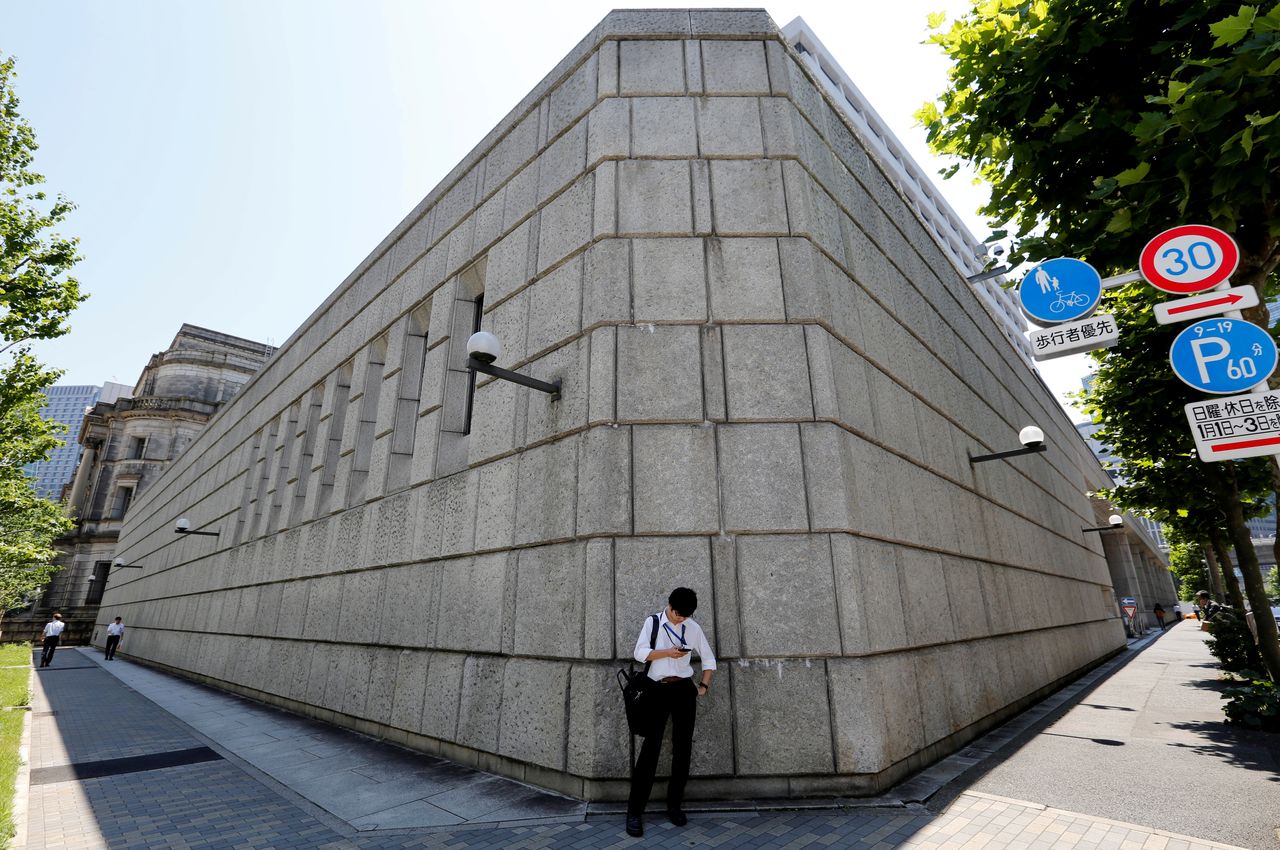 FILE PHOTO: A man looks at a mobile phone in front of the Bank of Japan building in Tokyo, Japan June 16, 2017. REUTERS/Toru Hanai/File Photo

TOKYO (Reuters) - The Bank of Japan is expected to downgrade its economic growth forecast for the current fiscal year as supply constraints caused by Asian factory shutdowns cripple output and exports, sources familiar with its thinking say.

The BOJ is also likely to trim its consumer inflation forecast for the year ending in March, five sources said, which would reinforce market expectations it will lag behind other central banks in whittling down crisis-mode stimulus measures.

The revisions would highlight the fragile state of Japan's recovery as rising import costs and supply bottlenecks hit firms, casting doubt on the central bank's view that strength in manufacturers' profits will offset weak consumption.

"Upcoming data will likely show a pretty big plunge in Japanese exports and output due to factory shutdowns in Asia. That will clearly push down economic growth," said one of the sources, who spoke on condition of anonymity as they were not authorised to speak publicly.

"Japan's recovery isn't derailed. But the timing of a clear rebound may have been delayed," another source said.

The revisions will be part of the BOJ's quarterly growth and price forecasts due at its next policy meeting on Oct. 27-28.

"We must be vigilant to the impact of supply constraints caused by supply chain disruptions in Asia," BOJ Deputy Governor Masayoshi Amamiya said on Friday, pointing to uncertainties over the economic outlook.

BOJ policymakers are counting on an expected rebound in consumption after the government's decision to lift state of emergency curbs on Sept. 30. But there is uncertainty on when and to what extent pent-up demand will begin to prop up growth.

Such uncertainty may force the BOJ to offer a bleaker view on the economy at October's meeting than the current assessment that it is "picking up as a trend," the sources said.

After slumping 4.4% in the year that ended in March, Japan's economy has been emerging from the doldrums as solid global demand moderated the hit to consumption from COVID-19 curbs.

Under current projections made in July, the BOJ expects the economy to expand 3.8% in the current fiscal year and rise 2.7% the following year.

The central bank expects core consumer prices, which fell 0.4% in the previous fiscal year, to rise 0.6% in the current year and increase 0.9% the following year.

Analysts polled by Reuters expect core consumer inflation to be flat in fiscal 2021 and rise 0.5% in fiscal 2022.