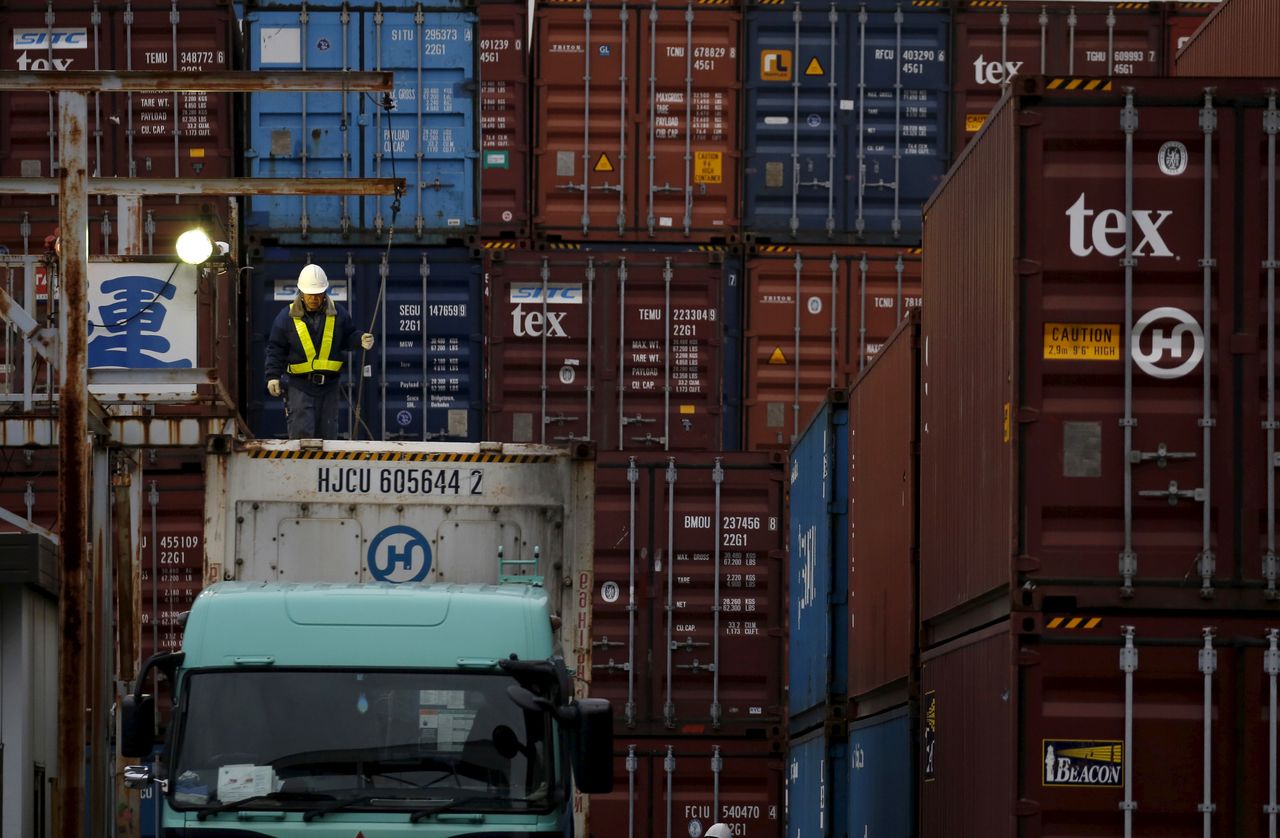 A laborer works in a container area at a port in Tokyo, Japan, March 16, 2016. REUTERS/Toru Hanai/Files

By Kantaro Komiya and Tetsushi Kajimoto

TOKYO (Reuters) -Japan's export growth weakened to its slowest in seven months in September, while a surge in imports added to worries that pandemic-led global supply chain snags could derail the country's fragile economic recovery.

Exports are losing steam at a time when a weaker yen and a spike in oil prices have pushed up import costs, hurting resource-poor Japan's terms of trade and potentially undermining Prime Minister Fumio Kishida's pledge to correct wealth gaps.

The trade data will be among factors the Bank of Japan will scrutinise when it releases fresh quarterly growth and inflation projections at its policy meeting later this month.

Exports rose 13.0% in September from a year earlier, Ministry of Finance data showed on Wednesday, compared with a median market forecast for an 11.0% rise, as car shipments tumbled 40.3%, the first drop in seven months.

While ahead of forecasts, export growth weakened from 26.2% in the previous month and was the slowest since February.

"While the effect of auto production cuts will abate once supply bottlenecks are resolved, fundamental concerns for growth peak-outs in the United States and China are unchanged," said Kota Suzuki, economist at Daiwa Securities.

"Exports will still be in the weak state for a while."

U.S.-bound exports, another key destination for Japanese goods, fell 3.3% to mark the first decline in seven months, as demand for cars and airplanes weakened.

Imports, meanwhile, jumped 38.6% in the year to September, following the prior month's 44.7% gain, driven by increased costs for oil, coal and medicines.

Imports have now risen for eight straight months, fuelling concerns that a recent yen weakening and surging oil prices are adding to the cost of living in Japan.

Japan's trade balance swung into a deficit for a second straight month at 622.8 billion yen ($5.43 billion), with the yen-based cost of imports the highest since November 2018.

The data may add to worries among policymakers hoping for an export-led recovery, while rising import costs will stoke fears of stagflation, or a combination of rising inflation and stagnating growth.

Policymakers are under pressure to maintain Japan's economic recovery from last year's pandemic-induced doldrums, despite additional strains from a resurgence of the pandemic in other parts of Asia.

The world's third-largest economy is expected to have expanded a meagre 0.8% in the third quarter, a Reuters poll showed, as parts shortages and supply constraints caused by Asian factory shutdowns disrupted automakers.