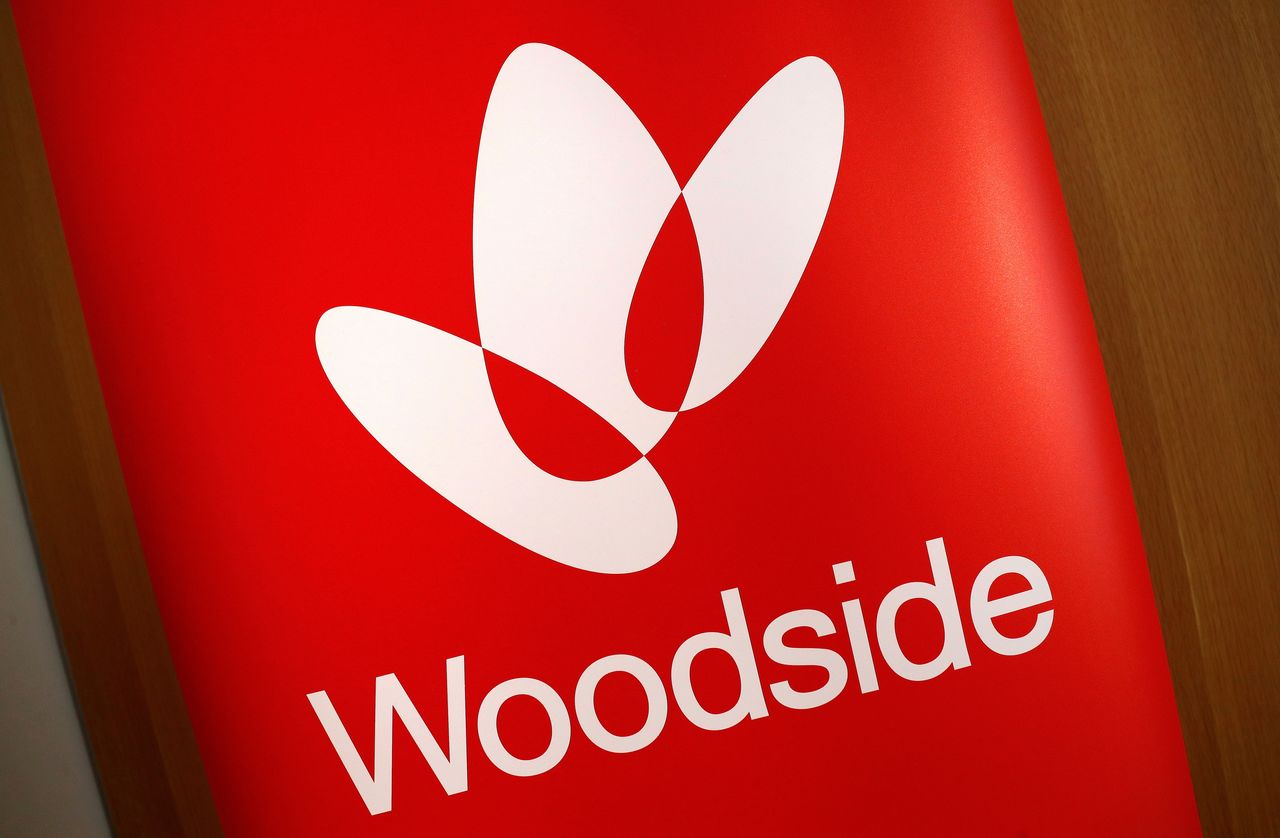 FILE PHOTO: The logo for Woodside Petroleum, Australia's top independent oil and gas company, adorns a promotional poster on display at a briefing for investors in Sydney, Australia, May 23, 2018. REUTERS/David Gray/File Photo

MELBOURNE (Reuters) -Woodside Petroleum slashed its gas reserves estimate for two fields at the Wheatstone project on Thursday, in an unexpected downgrade that knocked the top Australian oil and gas company's shares.

The company also said it was on track to sell down stakes in its $12 billion Scarborough gas project and Pluto LNG train 2 and $4.6 billion Sangomar oil project in Senegal, with soaring oil and gas prices improving its bargaining position.

"It certainly doesn't hurt to have oil prices in the $80s and record LNG prices and supply crunches at the time you're doing this," Chief Financial Officer Sherry Duhe told Reuters.

Woodside expects to announce selldowns on the Scarborough and Pluto in time to make a final investment decision on those projects by Dec. 15, she said.

Shares in Woodside, which is poised to merge with the petroleum arm of BHP Group, fell as much as 1.8% in a flat broader market after it cut its reserves estimate and reported weaker-than-expected third quarter sales revenue.

Woodside cut estimated total proved and probable reserves from the Julimar and Brunello fields, which contribute one-fifth of the gas at the Wheatstone LNG project run by Chevron Corp, by 27% to 168.4 million barrels of oil equivalent.

"Overall it does not change our fundamental view this is a multi-decade high quality asset and any changes in these reserves are back at that tail end of production anyway," Duhe said in an interview.

She said the downgrade would have no impact on production at the 8.9 million tonnes a year Wheatstone LNG plant and would not impact the merger ratio with BHP's petroleum arm.

The reserves estimate cut stemmed from reviewing well performance, drilling results and a reassessment of seismic data on the reservoir.

Woodside said its quarterly revenue more than doubled to $1.53 billion from $699 million a year ago, boosted by sales of third-party volumes into a hot spot market. However, it missed a broker consensus forecast of $1.69 billion.

It expects to benefit more from the strong prices in the fourth quarter, as most of its contracts are tied to oil prices with a three-month lag.

Woodside has more exposure to spot LNG prices, which have soared to record highs, than local rivals Santos, Oil Search and Origin Energy.

It expects about 17% of its produced LNG to be sold into the spot market in the fourth quarter.