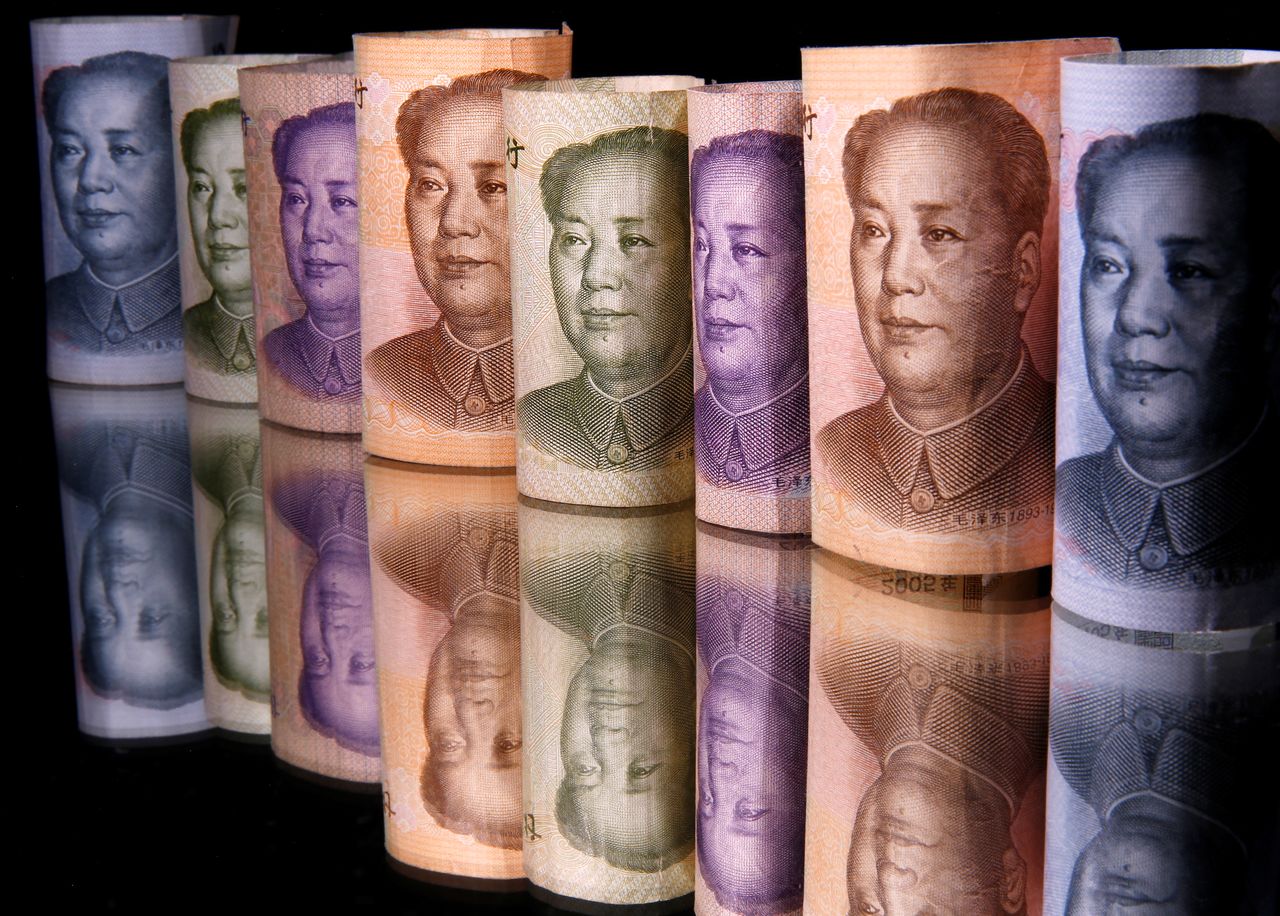 SHANGHAI (Reuters) - As China's yuan climbs rapidly to its strongest levels in six years against the currencies of the country's trading partners, a notable absence of concern and intervention by the authorities is unnerving investors.

Beijing has so far not intervened directly or verbally during the yuan's ascent since early September, which took it to 4-month highs and past 6.4 per dollar this week. The head of the currency regulator, the State Administration of Foreign Exchange(SAFE), said on Wednesday authorities will keep the yuan stable.

That silence, amid growing signs of weakness https://www.reuters.com/world/china/chinas-self-inflicted-slowdown-tests-beijings-reform-resolve-2021-10-19 in the economy, has analysts guessing that the People's Bank of China (PBOC) is keeping to its word about letting market forces dictate the yuan's trajectory.

One popular theory is that the currency has been left alone while authorities focus on resetting the rules and financing options for property, technology and a host of other sectors. The alternate is that the PBOC is waiting for the Federal Reserve to begin its policy tightening, which could reduce the flow of foreign money pushing the yuan up.

Regardless, as the 24-currency trade-weighted yuan index topped the 100 mark on Wednesday, a level last seen when it was launched in late 2015, market participants are desperate for some clarity.

"Keeping dollar-yuan stable could be the sweet spot at this point," analysts at Maybank said, while noting that a stronger yuan is for the moment reining in the rising cost of scarce raw materials and energy for mainland importers.

The PBOC and SAFE did not immediately respond to Reuters requests for comment.

Power shortages, a crackdown on the property sector and COVID-19 lockdowns caused a big deceleration in the world's second-biggest economy in the third quarter, but the central bank has kept rates steady and a tight rein on cash supply.

"My feeling is that the central bank is now very confident and at ease. Risk of capital outflow is low, liquidity is relatively easy to control," Xie said.

In addition, the growing trade surplus, capital inflows and a glut of dollars in the banking system would keep the yuan firm, he said.

TOLERANCE HAS ITS LIMITS

While China's monetary authorities have for the past four years tolerated relatively bigger swings in their currency - their stable currency reserves vouching for that hands-off stance - the currency is still tightly managed by the central bank.

Besides verbal warnings about one-way bets on the currency, authorities have on occasion tweaked reserve requirements, used their daily yuan benchmarks or had state-run banks step into the swap markets when the yuan was appreciating quickly.

The trade-weighted index has mostly stayed within a 92-98 band since 2016, while FX reserves hover just above $3 trillion.

That CFETS index is up 5.75% so far this year, driven mostly by the yuan's gains against the Japanese yen, euro and South Korean won as capital inflows into Chinese bonds and stocks and exporter earnings swelled.

By comparison, the yuan has firmed about 2.2% against the dollar.

But, he noted shipments have remained exceptionally robust.

"This explains why the central bank can tolerate yuan strength. Plus, a weaker yuan at a time that Beijing and Washington are reviewing the Phase 1 trade deal could be sensitive," he said.

One other reason why the PBOC could be resigned to the yuan's moves, analysts say, is because of the glut of dollars in the banking system, accumulated over the past couple of years as state banks and companies placed excess dollar earnings and inflows in deposits.

While the PBOC has kept to the sidelines, that pile of dollar deposits has grown and is just slightly below peak levels above $1 trillion hit in June.

The latest evidence of that overhang of dollars was the SAFE's balance of payments report showing China made 'other' outbound investments worth a net $265.3 billion in the first six months of the year, the bulk of which was deposits and loans.

"We believe that the dollar liquidity stuck onshore is a key reason causing the yuan to detach from its fundamentals," said Tao Chuan, chief macro analyst at Soochow Securities.

"The central bank has exited from frequent FX interventions...a lack of foreign investment channels and restrictions faced by domestic financial institutions has led to a large amount of FX, mainly in dollars, piling up on commercial banks' accounts."