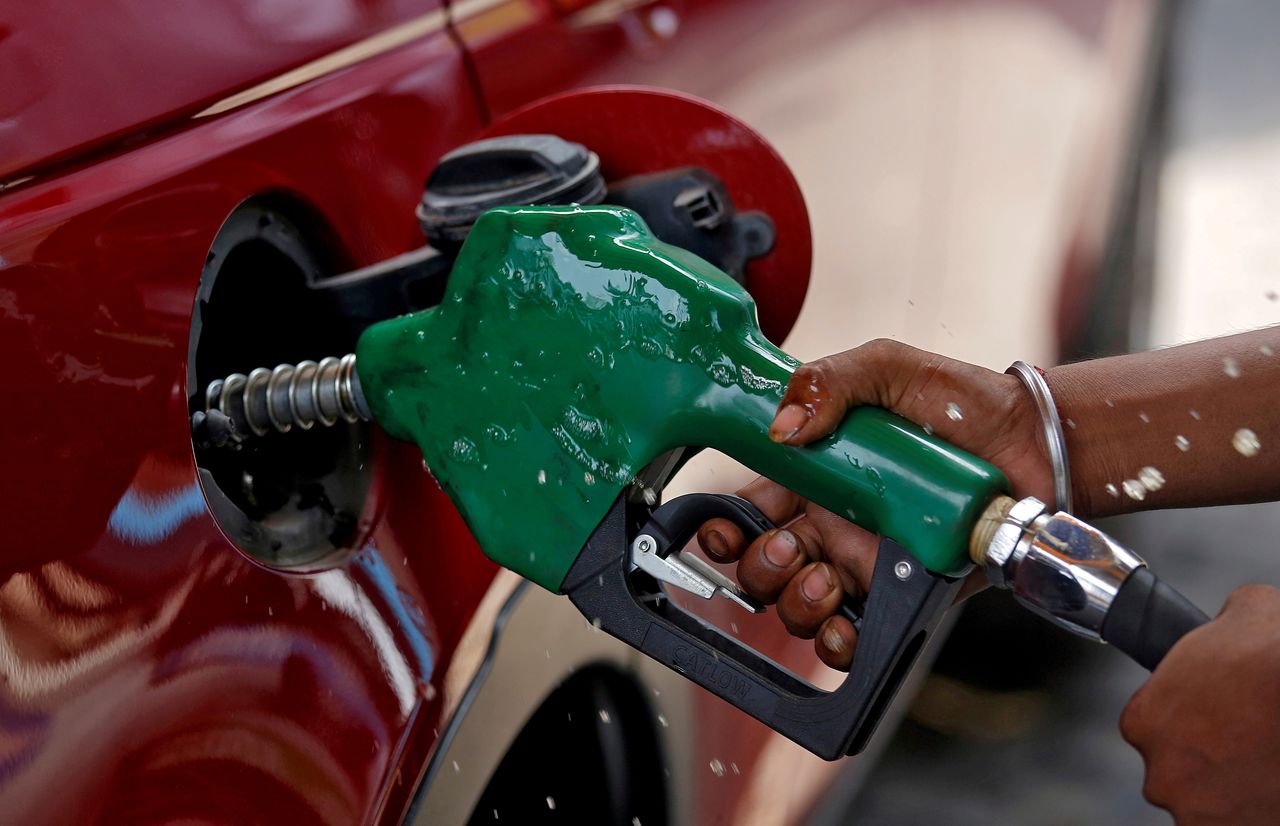 FILE PHOTO: A worker holds a nozzle to pump petrol into a vehicle at a fuel station in Mumbai, India, May 21, 2018. REUTERS/Francis Mascarenhas/File Photo

LONDON (Reuters) - European and Asian motorists may have to contend with high petrol and diesel costs for months to come as a rise in crude prices, resurgent fuel demand and taxes drive up prices at the pump to or near record peaks.

The jump in road fuel prices comes as countries in Europe and elsewhere are grappling with soaring power prices going into the northern hemisphere winter and could hurt consumer spending nS8N2DV074, undermining the global economic recovery from the pandemic.

They are expected to remain elevated as analysts and traders expect the price of Brent crude - the global benchmark - to stay around current levels of about $85 a barrel for the remainder of the year.

"High fuel prices put pressure on overall price levels and poses a downside risk to the recovery in mobility and the economy in general," said Kavita Chacko, a senior economist at CARE Ratings in India.

"The rise in transportation costs have been feeding into costs across segments and could be a dampener for consumer spending."

A rebound in demand as road traffic returns to pre-pandemic levels is outpacing growth in supply amid low investment in fossil fuels, subdued refinery output and delayed maintenance due to COVID-19 and logistical bottlenecks.

In Britain, where disruptions in distribution networks prompted its worst fuel crisis nL8N2R1165 in decades in late September, the average price of unleaded petrol at the pump rose to 1.41 pounds ($1.94) this week, near a high of 1.42 pounds hit in April 2012, data from automotive services firm RAC unit Fuel Watch shows.

That means a driver is now paying 15 pounds more to fill a 60-litre tank compared to last year when the average price of petrol was around 1.15 after nationwide lockdowns slashed demand.

Petrol prices in India, the world's third biggest consumer of crude oil, hit a record 106.89 Indian rupees ($1.43) a litre on Friday while in France, the cost of a litre of diesel reached a new record last week of 1.55 euros ($1.80) a litre on average, according to data from the Ministry of Ecological Transition.

Some filling stations, like one in London's affluent Chelsea neighbourhood for instance, have almost doubled the price to 2.70 pounds per litre, roughly equivalent to $10 per U.S. gallon.

This has drawn the ire of consumer groups who say oil prices are nowhere near the record high of $147 a barrel hit in 2008 to justify the recent spike at the pump. Fuel suppliers, however, say the price rises are no way near the jump in crude.

A spokesperson for the UK Petroleum Industry Association said while UK average pump prices have risen by 21% for petrol since the beginning of the year, the price of Brent crude - the global benchmark - has jumped 66%.

The surge at the pump also reflects high taxes on fuel in countries like India, France and the United Kingdom where they account for roughly 60% of the retail price of petrol and diesel, data from government and auto services firms show.

In Japan, the retail price of petrol rose to 164 yen ($1.44) per litre this week, the highest in seven years, according to the industry ministry’s weekly data. It has risen more than 20% so far this year.

Japanese consumers pay a gasoline tax of 53.8 yen per litre plus an oil and coal tax of 2.8 yen per litre. A retail tax of 10% will be added to the price as well.

Petrol and diesel demand gained traction this summer as people avoided public transport and travelled around the country by car amid flight restrictions.

Road traffic in major European capitals like London, Paris, Rome and Berlin, has been on the rise since the start of the year, Apple Mobility Trends showed, and remained above a baseline volume in January 2020.

The price of petrol is tracking crude more closely in the world’s largest gasoline market – the United States - and is far from a record high.

The average retail price of a gallon of petrol has risen to $3.36, more than a dollar per gallon higher than the average at this time last year, according to AAA figures.

However, U.S. consumers feel the pressure of higher petrol prices when they approach the $4 per gallon threshold, according to industry analysts. Winter fuel costs nL1N2R916Z are expected to surge, according to the U.S. government.

U.S. President Joe Biden said on Thursday he expects gasoline prices to fall in 2022 and that any further price reduction depends on factors such as the actions of Saudi Arabia.