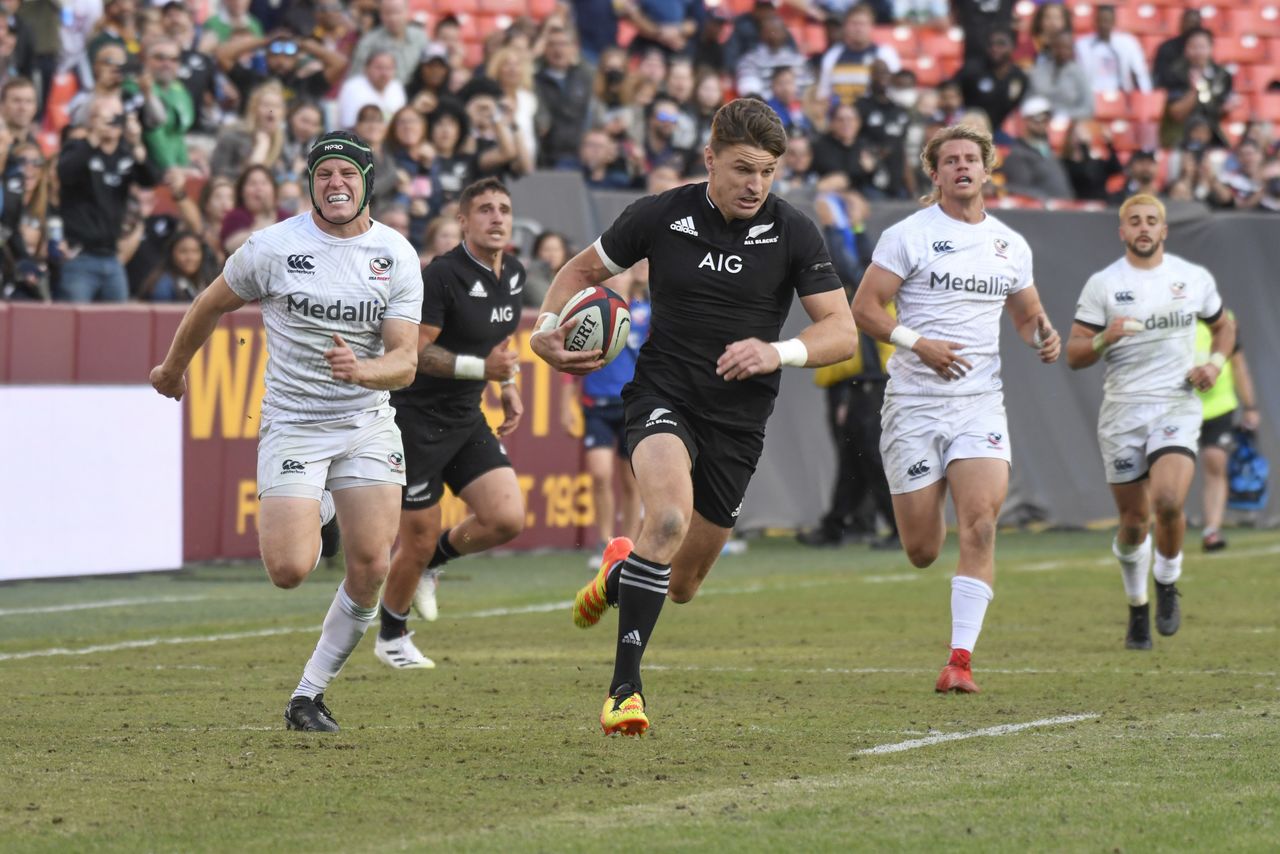 (Reuters) -New Zealand got back to winning ways as they romped to a record 104-14 victory over the United States in Washington on Saturday in a lopsided test match in which the Eagles at least secured their first-ever try against the All Blacks.

New Zealand, who had not played in the U.S. since 2016, totally dominated in their first outing since a 10-match winning streak was snapped by South Africa in the final game of the Rugby Championship.

Will Jordan scored three tries, Richie Mo'unga added another and kicked nine conversions for an All Blacks team that ran in a total of 16 tries, including nine in the first half alone.

"I know they'll be disappointed with the scoreline but it's about experience for them," All Blacks head coach Ian Foster told reporters.

"And the reality is I think they were a little shell-shocked through the first five minutes and it took them a while to actually figure out that they could play against us."

Prior to the start, American captain Bryce Campbell dropped to one knee at the halfway line as he presented a white, No. 11 U.S. jersey in honor of Sean Wainui, the Maori All Blacks player who died in a car crash on Monday.

The All Blacks then performed the haka to honor Wainui and it drew wild applause from the over 40,000 fans in attendance before the visitors made a blockbuster start to the test match at the home of the NFL's Washington Football Team.

Straight from the kickoff the ball got shifted wide and George Bridge got away down the wing and fed Finlay Christie, who found flanker Luke Jacobson on the inside and he ran away to score in the corner 28 seconds into the match.

The Eagles, who before Saturday's match had faced the All Blacks three times in test rugby, were totally outplayed but did make history as they recorded the team's first-ever try against the most successful team in international rugby.

U.S.halfback Nate Augspurger broke from a ruck and slipped by Sam Whitelock before a burst of speed took him past Damian McKenzie while the diving Mo'unga also could not catch him as he scored under the posts to take the hosts to 59-7 at the break.

The hosts added a second try when wing Ryan Matyas dived over in the corner under a challenge from Will Jordan. The on-field decision to award the try was backed up by a review.

The All Blacks had their attack firing but were ultimately unable to eclipse their record test victory, which was set at the 1995 World Cup in South Africa when they beat Japan 145-17.

"When you play the best tackle team in the world that's what's going to happen for 80 minutes," said Eagles coach Gary Gold. "It's a very tough lesson, but it is a lesson and we will learn from it, we most certainly will."

Billed as the 1874 Cup, which is a reference to the first account of organised rugby being played in the United States, the match was designed to grow interest in a nation hoping to stage a future Rugby World Cup.

For the All Blacks, the match marked the start of a run of five tests in consecutive weeks with Wales, Italy, Ireland and France their other opponents.

(Reporting by Frank Pingue in Toronto, editing by Pritha Sarkar and Ken Ferris)