In Ocado's world, the rise of the machines is unstoppable

By James Davey and Kate Holton

ERITH, England (Reuters) - In a warehouse in London's suburbs, thousands of robots swarm in a mesmerising dance across the top of a grid the size of six football pitches, racing to supply groceries to the British capital's shoppers.

Built by UK online supermarket pioneer Ocado, the washing-machine sized bots have caught the eye of international retailers battling a shortage of workers and rising wage demands in a post-pandemic world.

It has already struck deals to provide its technology to supermarket groups in eight countries including the United States, Japan and France. In a recent three-week window it hosted prospective clients from another five countries.

Luke Jensen, CEO of the London-listed company's technology arm, Ocado Solutions, told Reuters they want to automate the entire process from farm and factory gate to shopper's fridge, while driving up productivity at its sites known as customer fulfilment centres (CFCs).

With plans in place to eventually automate most manual warehouse jobs, Ocado's success could have profound implications for labour in the retail industry globally.

"At a ten year horizon we would expect most lower value added tasks to be performed by technology and for the jobs in CFCs to be focused on supervision and engineering," he said.

Founded two decades ago by three former Goldman Sachs bankers, Ocado has long faced doubts that it can turn a sustainable profit - in 2017 and 2018 it was often the most shorted UK stock, according to analytics firm Ortex.

But the international deals have changed the conversation: its shares are up around 700% since it struck its first major partnership in late 2017, giving it a market value of $19 billion.

It now needs to deliver - profit at the technology arm will be held back by the costs of building partner sites, before Ocado starts earning a portion of sales once operational.

At its largest site, the $310 million building in Erith, southeast London, more than 2,000 robots whizz around the steel and aluminium grid covering four metres a second, replacing the humans who once retrieved groceries.

Workers below pack the goods, but a robotic picking arm is machine learning the task, and will eventually replace them.

The arm can already handle 15% of Ocado's product range, a figure the company expects to reach around 50% in two years, with 80% "absolutely feasible" in the longer term. Retail partners will be using it within three years, Jensen said.

It is also working to automate the arrival of goods into CFCs and the loading of customer orders onto delivery vans, and eventually wants to use autonomous vehicles to move goods between suppliers, warehouses and homes.

While retailers in Asia like JD.com have already automated the whole warehouse process, IGD analyst Simon Mayhew said Ocado led the way in grocery automation, where goods are fragile and can require chilled or frozen temperatures.

Jensen says automation is "the number one boardroom pre-occupation for retailers", driven not just by the shortage of workers but also an acknowledgement that the pandemic has moved the dial on online groceries.

Analysts expect online ordering to make up 15-20% of total grocery sales in major markets in the medium term.

Many grocers have concluded that in densely populated areas the old model of solely store picking online orders for delivery may not be the best use of capital.

Firms such as Walmart and Tesco have been working with tech groups such as Dematic, Fabric and Alert Innovation, mostly with a focus on smaller-scale micro fulfilment centres, often next to stores.

Norway's AutoStore, a closer rival to Ocado, works with brands including British supermarket Asda, and Gucci.

But while retail giant Amazon has automated many parts of its operations, its Whole Foods staff still largely pick online orders in store.

Ocado says that while others can offer services such as webshop design, routing systems or warehouses, only it can join them all together, delivering metrics such as food waste of just 0.4% of sales versus 2.5%-3% for most supermarket groups.

Erith's productivity is already 25% higher than that of Ocado's first British CFC and Jensen sees scope for further gains of 50-70%.

Burt Flickinger, head of retail consultancy Strategic Resource Group, says credibility gained from Ocado's success in the UK and the U.S. affirms it can operate anywhere.

It has partnership deals with America's biggest grocery retailer Kroger, Casino in France, Aeon in Japan, Coles in Australia and Auchan's Alcampo chain in Spain.

At Erith, Jensen is already thinking about taking Ocado's technology beyond grocery retailing into general merchandise.

"It's definitely an option longer term," he said. 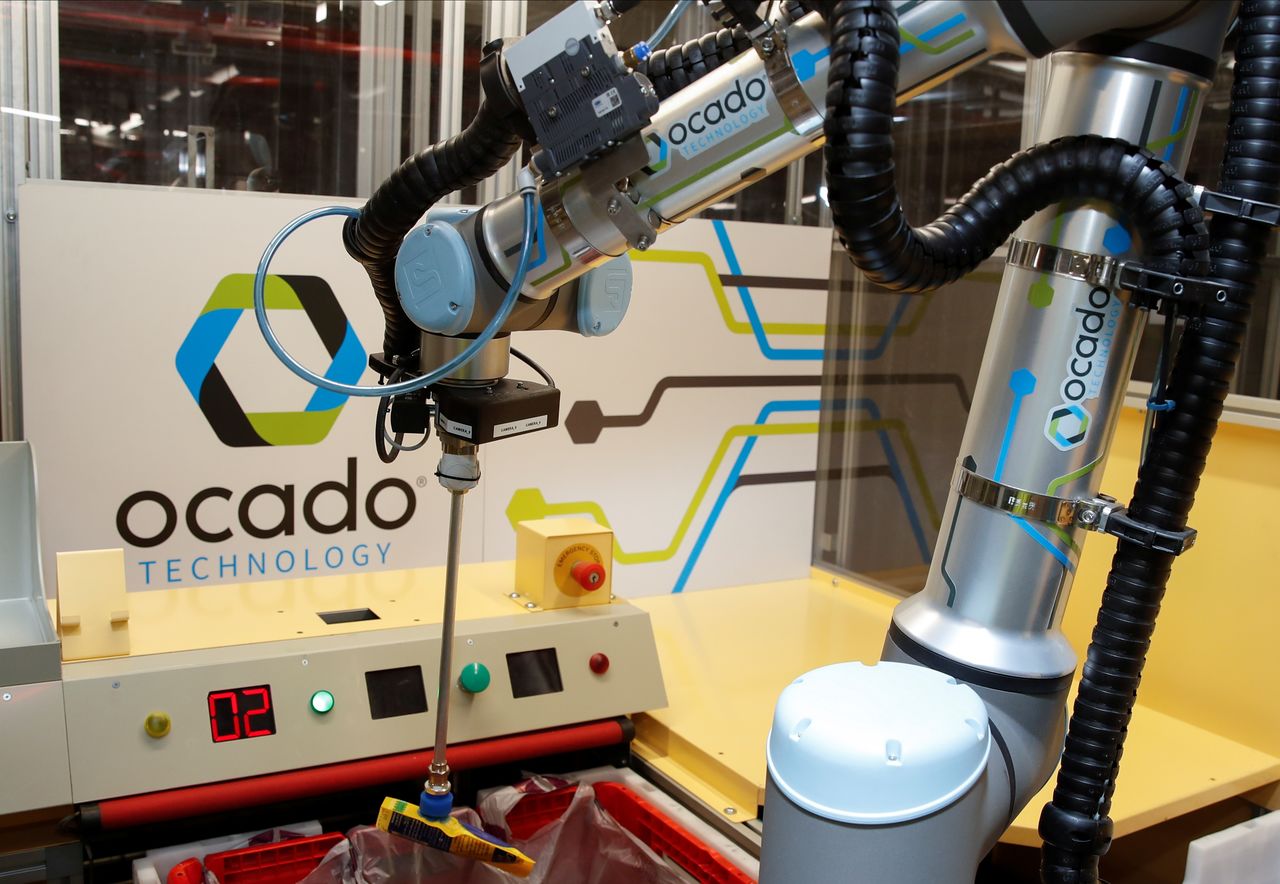 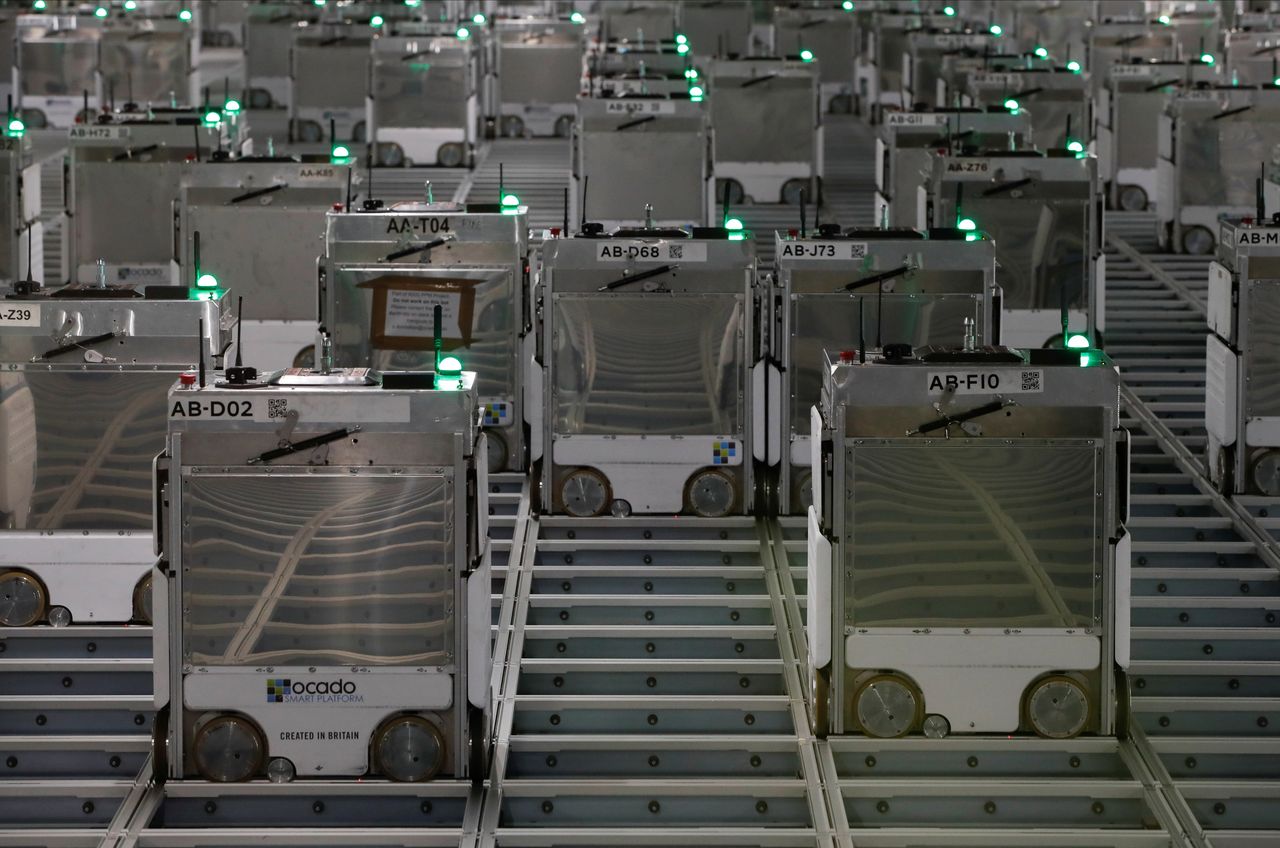 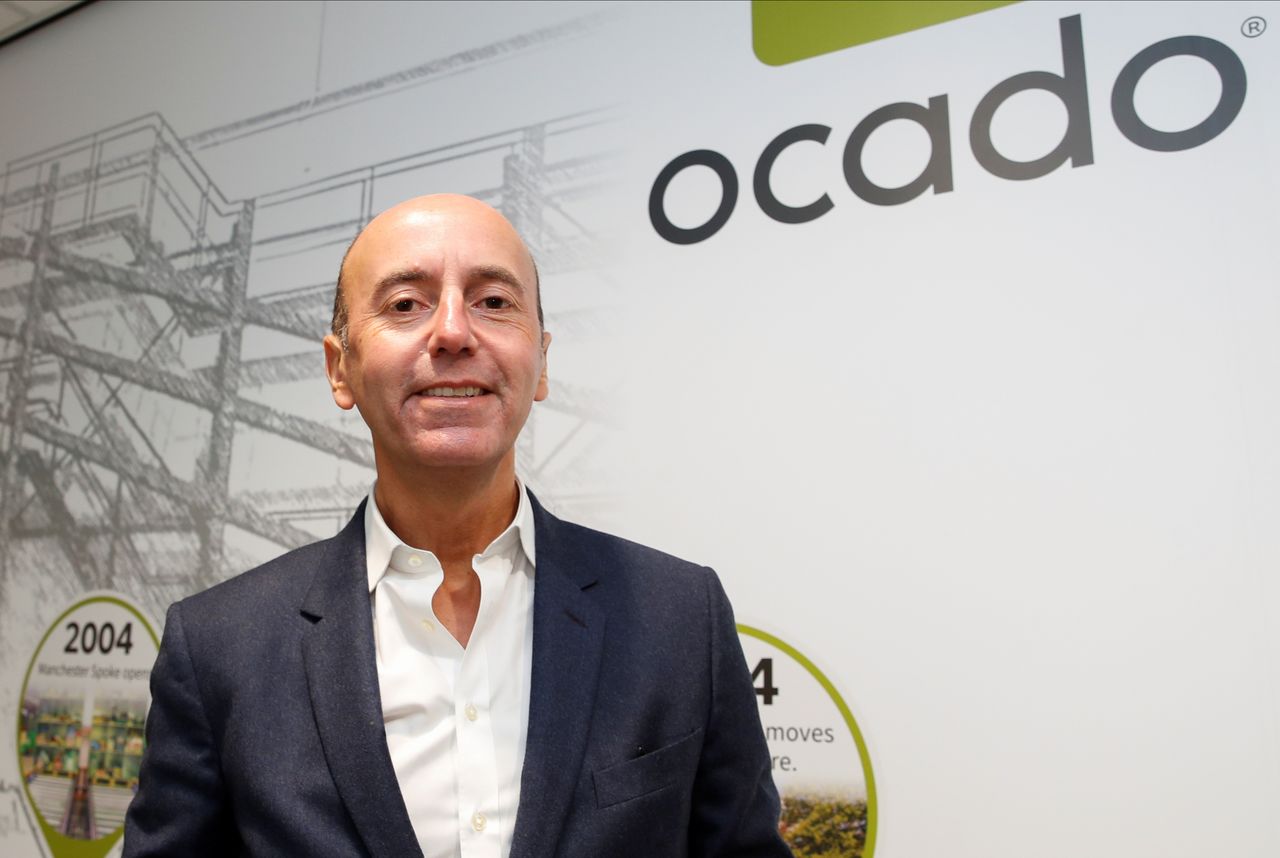 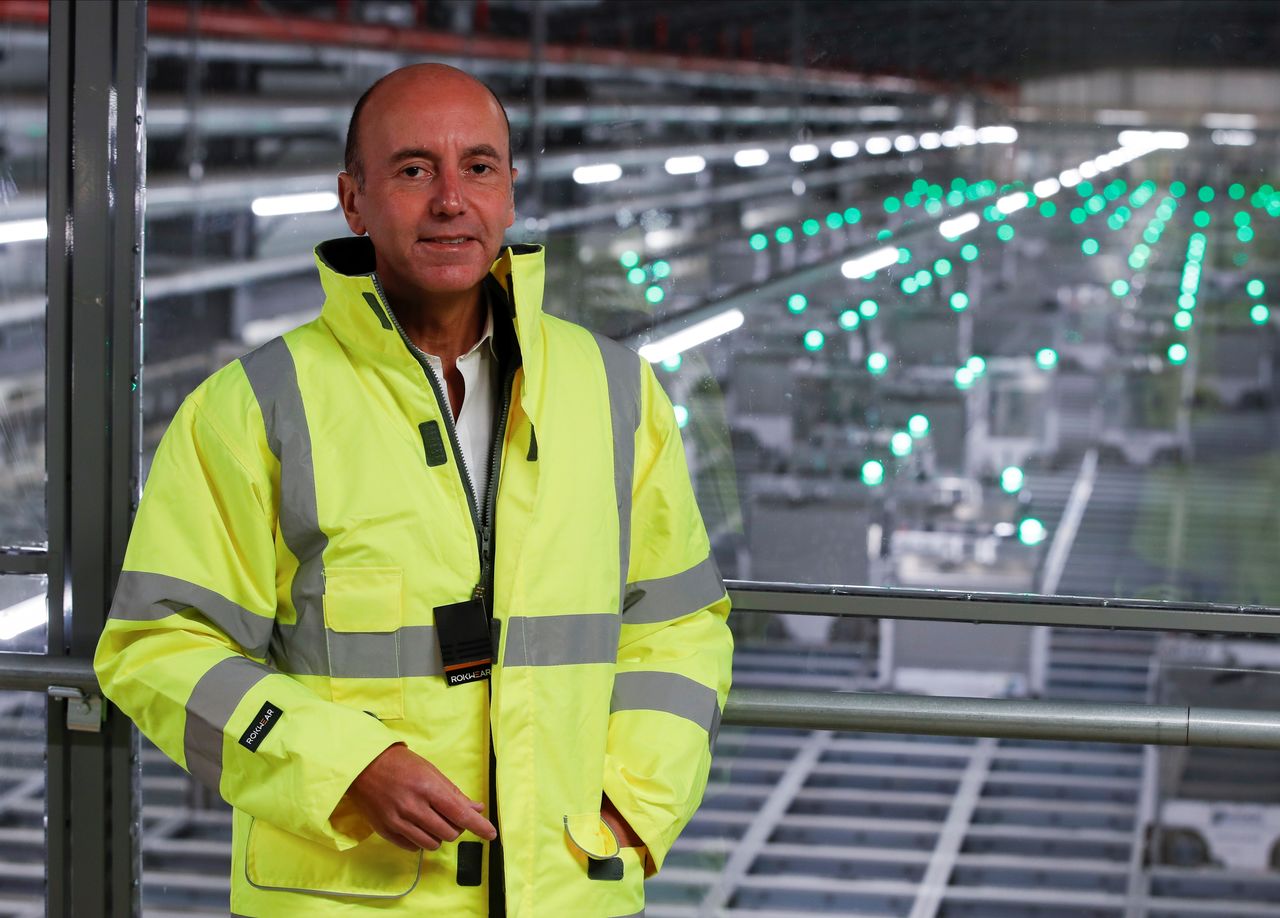 Luke Jensen, CEO of Ocado Solutions at Ocado poses for a photograph inside the Ocado warehouse in Erith, London, Britain, October 13, 2021. REUTERS/Paul Childs 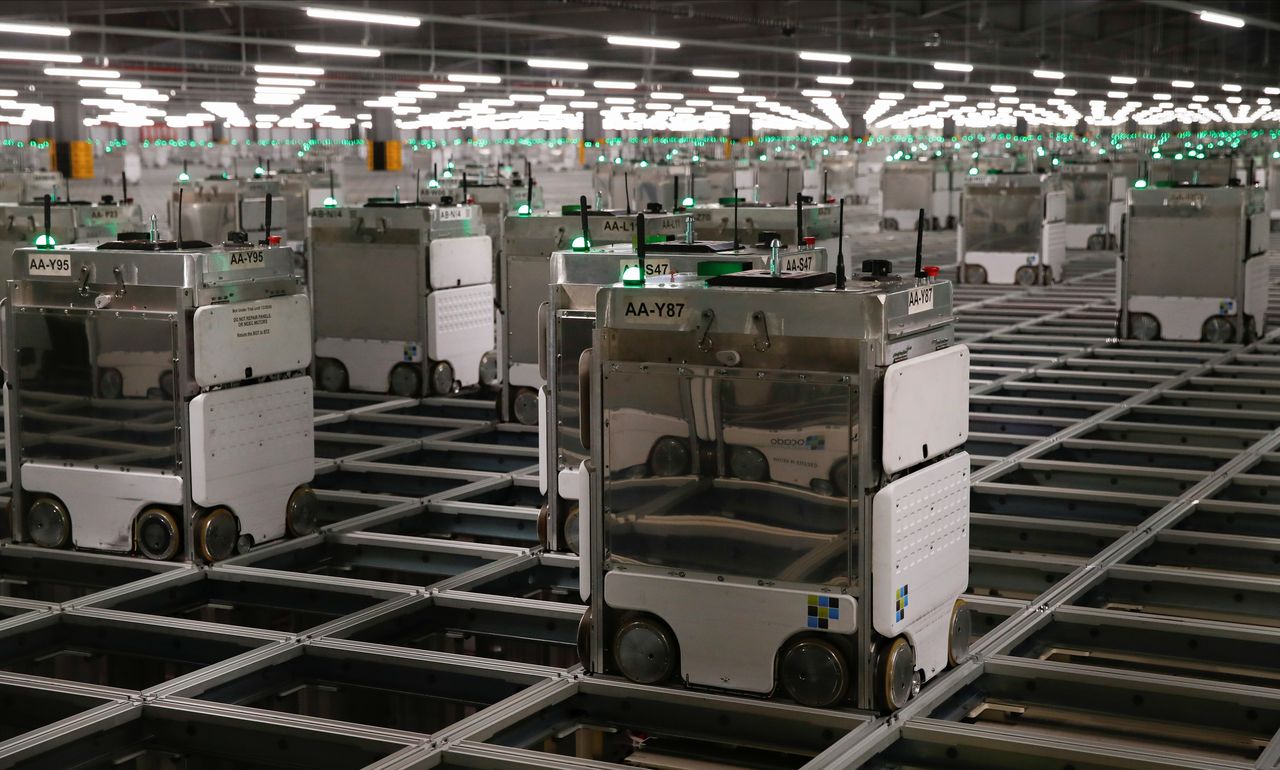