Factbox: Who are Japan’s Princess Mako and her husband, Kei Komuro? 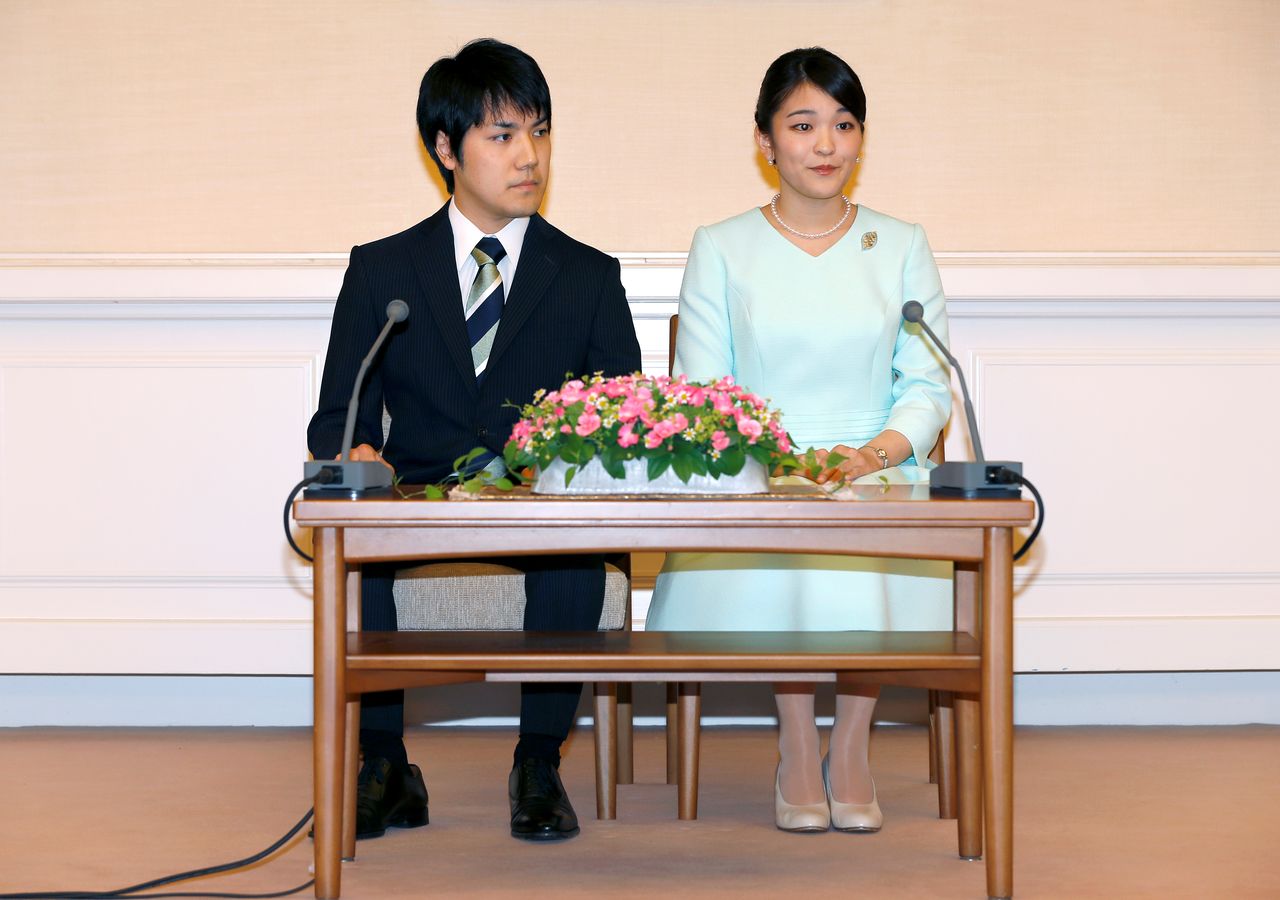 FILE PHOTO: Princess Mako, the elder daughter of Prince Akishino and Princess Kiko, speaks to media with her fiancee Kei Komuro, a university friend of Princess Mako, during a press conference to announce their engagement at Akasaka East Residence in Tokyo, Japan, September 3, 2017. REUTERS/Shizuo Kambayashi/Pool

The two, both 30, will move to New York, where Komuro works in a law office, although news reports say Mako will stay behind in Tokyo to make preparations, including applying for her first ever passport.

Following are some facts about Mako, who will now be known as Mako Komuro, gaining a surname for the first time in her life, and her new husband.

Born on October 23, 1991, Mako is the first child of the current emperor’s younger brother, Prince Akishino, and his wife, Princess Kiko - who were college sweethearts, like Mako and Komuro.

The birth of the first granddaughter to then-Emperor Akihito and Empress Michiko was greeted by intense media coverage despite the fact that she could not, by law, inherit the throne. This included the proud father telling reporters after viewing his newborn daughter: “She’s cute. She looks like me.”

Mako was followed three years later by her sister Kako, and the two were joined by their brother Hisahito in 2006, the first male born to the imperial family since 1965.

Though Mako initially followed royal tradition and attended the elite Gakushuin school through the end of high school, she broke with custom by not continuing at the institution for her university studies, choosing instead to attend Tokyo’s International Christian University.

She graduated in 2014 with a degree in art and cultural studies, having spent a year abroad at the University of Edinburgh. She later obtained a master’s degree in Art Museum and Gallery studies.

Mako first met Komuro at a meeting of students planning to go abroad in 2012.

Komuro was raised by a single mother, with some media reports saying part of his education was funded by his mother’s former fiance.

At one point, he earned some money by working for tourism promotion near Tokyo.

Trouble erupted a few months after he and Mako announced their engagement in 2017, when tabloids reported a financial dispute between Komuro’s mother and her former fiance, with the man claiming mother and son had failed to repay a debt of about $35,000.

Komuro later said the money had been a gift, not a loan. But in 2021, he submitted a 24-page explanation and later reportedly said he would pay a settlement.

In September 2018, he left for studies at New York’s Fordham University and didn’t return until September this year, after having graduated from law school and started working at a New York law firm. He took the bar exam in July, with results due in December.

When he returned to Japan, he was dressed casually and sporting long hair drawn back in a ponytail, setting off a media frenzy because it was deemed “disrespectful”.

But on Tuesday morning, ponytail shorn and dressed in a crisp dark suit and tie, he left to claim his bride. Most of his face was covered with a mask in line with Japan’s coronavirus protocol, but he looked happy.