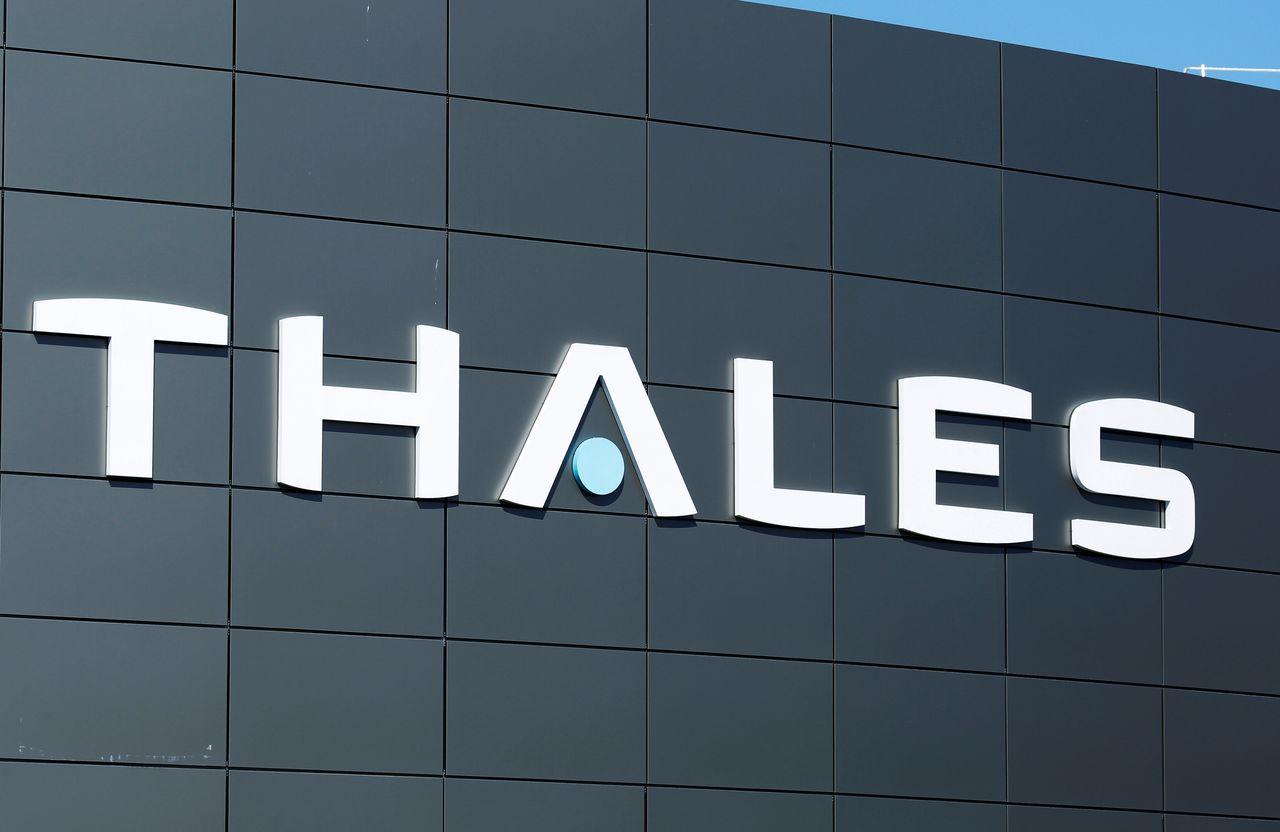 FILE PHOTO: The logo of French defence and electronics group Thales is seen at the company's headquarters in Merignac near Bordeaux, France, March 22, 2019. REUTERS/Regis Duvignau

PARIS (Reuters) - French defence group Thales reaffirmed full-year financial forecasts as it reported a 1.4% dip in underlying third-quarter sales, dampened by comparisons with the easing of a first wave of COVID-19 lockdowns a year earlier.

The maker of radars for fighters and airport control towers, as well as biometric identity systems, also reported a 9% pick-up in quarterly orders on a like-for-like basis, led by its satellite business and a partial recovery in commercial flying.

The gradual rebound in short-haul and domestic air travel helped push Thales' Aerospace unit sales up 4% in the third quarter, while its 'Digital Identity and Security' division also ticked higher as more people start to travel after shunning flights during the pandemic.

Overall, Thales' group sales slipped 1.4% to 3.555 billion euros ($4.1 billion) in the third quarter because of a tough basis of comparison with the same period a year earlier, while new orders rose by an underlying 9% to 2.992 billion.

Thales said it continued to implement the sale of its GTS railway signalling business after announcing advanced talks in August to sell it to Japan's Hitachi. The proposed deal values the division at 1.66 billion euros.

On Tuesday, it said it expected to sign a definitive deal in the first quarter of 2022. For now, the group's 2020 and 2021 numbers have been adjusted to remove the outgoing unit.

The Paris-based company, which owns 35% of France's state-run Naval Group military shipyard, reiterated it did not expected a significant financial impact from the cancellation of a contract to supply Australia with French submarines.

Australia last month said it would scrap a $40 billion deal for Naval Group to supply conventional submarines and would instead build at least eight nuclear-powered subs with U.S. and British technology after striking a trilateral security pact.

It remains unclear whether Thales could still pick up any business for the replacement subs via its presence in the UK.

"As to what a new submarine contract would look like, and whether our activities could be involved, that's much too early to say," Bouchiat said.

Asked about widespread concerns about growing labour shortages and logistical bottlenecks, Bouchiat said Thales faced "a battle for talent" alongside many other companies.

He did not see significant supply chain bottlenecks, though a shortage of semi-conductors has cost the company some 20-30 million euros that it expects to recoup in the fourth quarter.