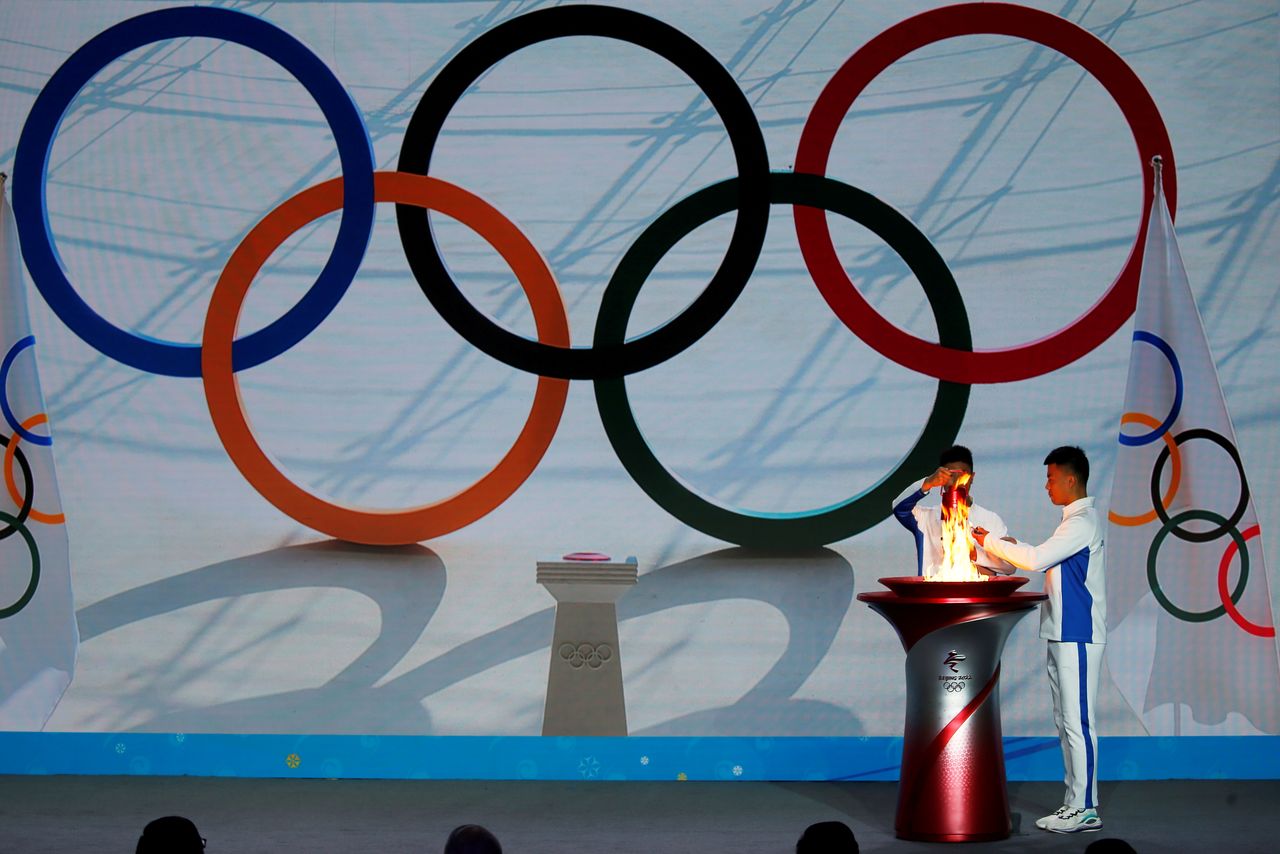 FILE PHOTO: Participants transfer the Olympic flame from a cauldron at the ceremony to welcome the flame for the Beijing 2022 Winter Olympics, in Beijing, China October 20, 2021. REUTERS/Tingshu Wang

Vaccination is not mandatory for participants but athletes and officials who are not jabbed for COVID-19 must spend 21 days in quarantine, with some case-by-case exceptions for medical reasons.

Some British athletes reportedly went to the 2020 Tokyo Summer Games unvaccinated but Harland indicated that while Team GB had yet to select most winter athletes, those on the long list appeared to have fewer qualms.

"Our intelligence at the moment tells us that most of those athletes on the long list are already vaccinated. I have full confidence that we will go to the Games with a fully vaccinated team," she said.

Bobsleigh and skeleton test events were held at the National Sliding Centre in Beijing on Monday, the first international competition at the newly constructed venue.

"The feedback coming out of the test events is that the venues are going to be incredible and Beijing are going to deliver a fantastic Games," said Harland.

"Yes, there is going to be restriction around movements but we managed that in Tokyo and we’ll be taking those learnings through to Beijing."

Rights groups have called for a boycott of the Games to protest against what they see as human rights atrocities in Tibet, Xinjiang and Hong Kong. China has rejected those claims.

Harland said the British Olympic Association was aware of potential concerns and recognised the strength of feeling some athletes might have.

"The British Olympic Association upholds freedom of speech for athletes. It’s not our place to tell athletes what opinions they should and shouldn’t have and the views they have," she said.

"Our first responsibility is to share (the IOC guidelines). And then as part of that process, an open dialogue with athletes about what is important to them and where they may want to express those views."

Team GB took 58 competitors across 11 sports to Pyeongchang, South Korea, in 2018 with a haul of five medals -- a gold and four bronze.

Harland said the current estimate was 57 athletes for Beijing across 17 disciplines. Snowboard and freestyle skiing offer some of the best medal chances.

"I think it's really important we show that we don't just have one or two sports that we're competitive in," she said. "We're taking athletes across more sports than before.

"We've got very credible athletes across these disciplines as well."