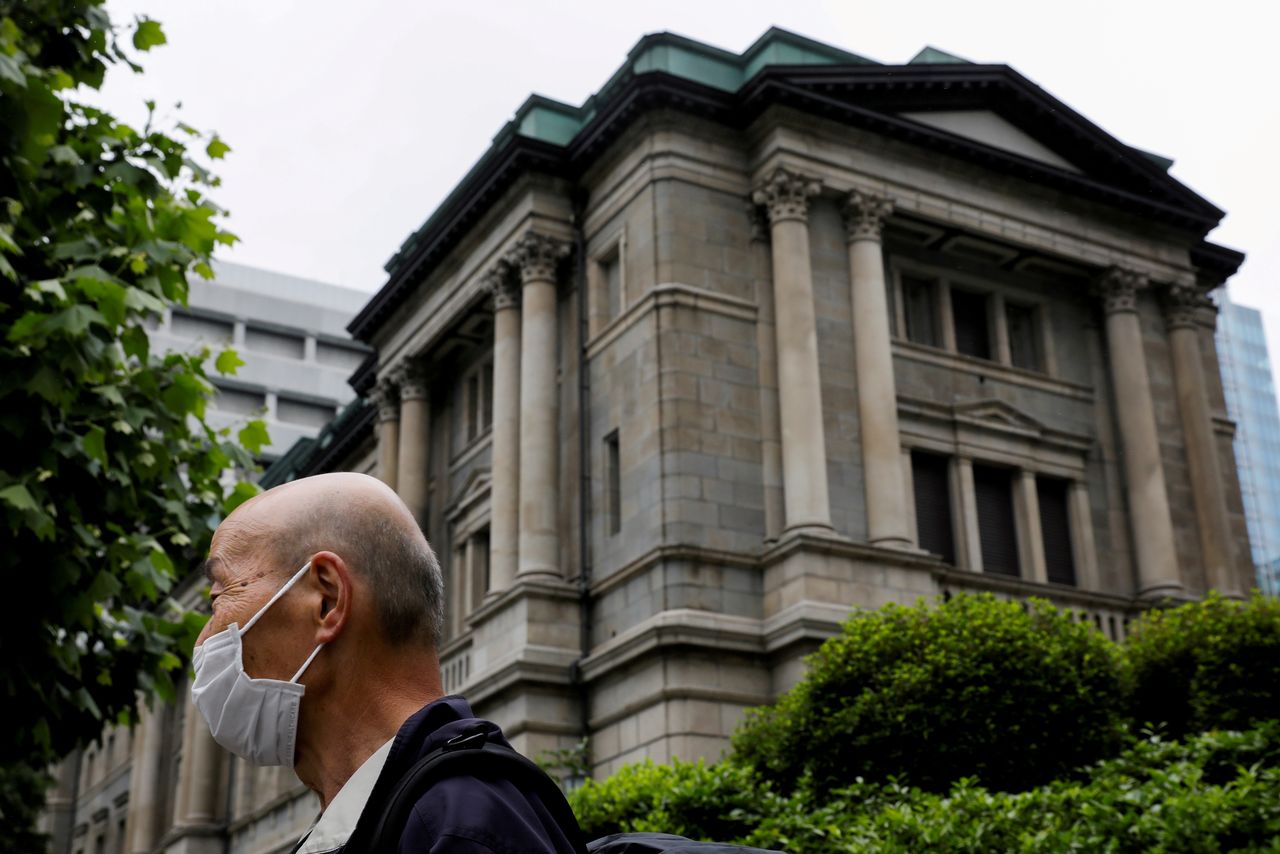 FILE PHOTO: A man stands in front of the headquarters of Bank of Japan in Tokyo, Japan, May 22, 2020. REUTERS/Kim Kyung-Hoon

TOKYO (Reuters) -Bank of Japan Governor Haruhiko Kuroda on Thursday welcomed the economic benefits of a weak yen, brushing off fears that rising import costs could derail a recovery and committing to an easy policy even as other nations dial back crisis-mode stimulus.

Kuroda said a softer yen is "definitely positive" for the economy and reassured markets the BOJ will maintain its massive accommodative policies, after the release of projections showing inflation will fall short of his 2% target for at least two more years.

"Central banks take policies most appropriate for their economies and prices. Their decisions won't have any direct impact on Japanese monetary policy," Kuroda told a briefing after a two-day rates review.

Rising commodity costs have pushed Japan's wholesale inflation to a 13-year high in September. But the pass-through to households has been remarkably slow due to sluggish domestic demand, a problem that has bedevilled Japan for decades, keeping consumer inflation stuck around zero.

That leaves the world's third-largest economy as an outlier, especially as intensifying global inflation pressure is prompting more central banks to consider withdrawing their massive stimulus.

Kuroda, however, said the benefits of a weak yen, such as the boost to exports and the yen-based profits Japanese firms earn overseas, outweighed the damage from the higher costs.

"The yen's recent weakening, as a whole, is definitely positive for Japan's economy," he said. "It's true the yen has weakened somewhat. But I don't think the moves deviate from fundamentals."

As expected, the BOJ maintained its target for short-term interest rates at -0.1% and that for 10-year bond yields around 0% at the two-day rate review that ended on Thursday.

The dollar has hovered around 113.50 after hitting a four-year high of 114.585 yen on Oct. 20, prompting the government to call for "stable" currency moves.

The dollar/yen is still below the 125 level seen by analysts as Kuroda's line-in-the-sand. But the yen's real, effective rate fell roughly 4.7% this year to 70.4 in September, BIS data showed, underscoring Japan's diminishing purchasing power.

In fresh quarterly estimates, the BOJ cut its consumer inflation forecast for the year ending in March 2022 to 0% from 0.6%. It also slashed this year's economic growth forecast on sluggish consumption and the hit to factory output from supply disruptions caused by the COVID-19 pandemic.

The projections highlight the policy gap between Japan and other economies.

In Australia, core inflation sped to its fastest annual pace since 2015. Its central bank on Thursday made no offer to buy a government bond that is the linchpin of its stimulus programme, stoking market speculation about an early rate hike.

Overnight, the Bank of Canada jolted markets by ending its bond buying and flagging a hike as soon as April.

Economists from around the world expect 13 of 25 central banks would raise rates at least once before the end of next year, a global Reuters poll showed.

"The BOJ is living in a totally different world as an outlier from the global trend," said Masamichi Adachi, chief economist at UBS Securities.

"Given tepid inflation expectations, the BOJ will stick to easing policy under yield curve control at least until Governor Kuroda and his two deputies serve out their terms in 2023."

The BOJ said exports and output - key drivers in pulling the economy out of last year's pandemic-induced doldrums - were "temporarily" slowing due to supply bottlenecks.

But it raised its growth forecast for next fiscal year and said inflation expectations were "picking up," pointing to the chance rising wages will gradually make households more accepting of price hikes.

"As firms become eager to change their price-setting behaviour, more of them could start to pass on costs and raise prices," the BOJ said in the quarterly report.

Kuroda, however, said the process will be moderate - all the more reason for the BOJ to keep monetary policy ultra-loose.

"Under current conditions, there are more merits than demerits in maintaining ultra-loose monetary policy," he said.