Climate set to dominate G20 summit ahead of U.N. conference 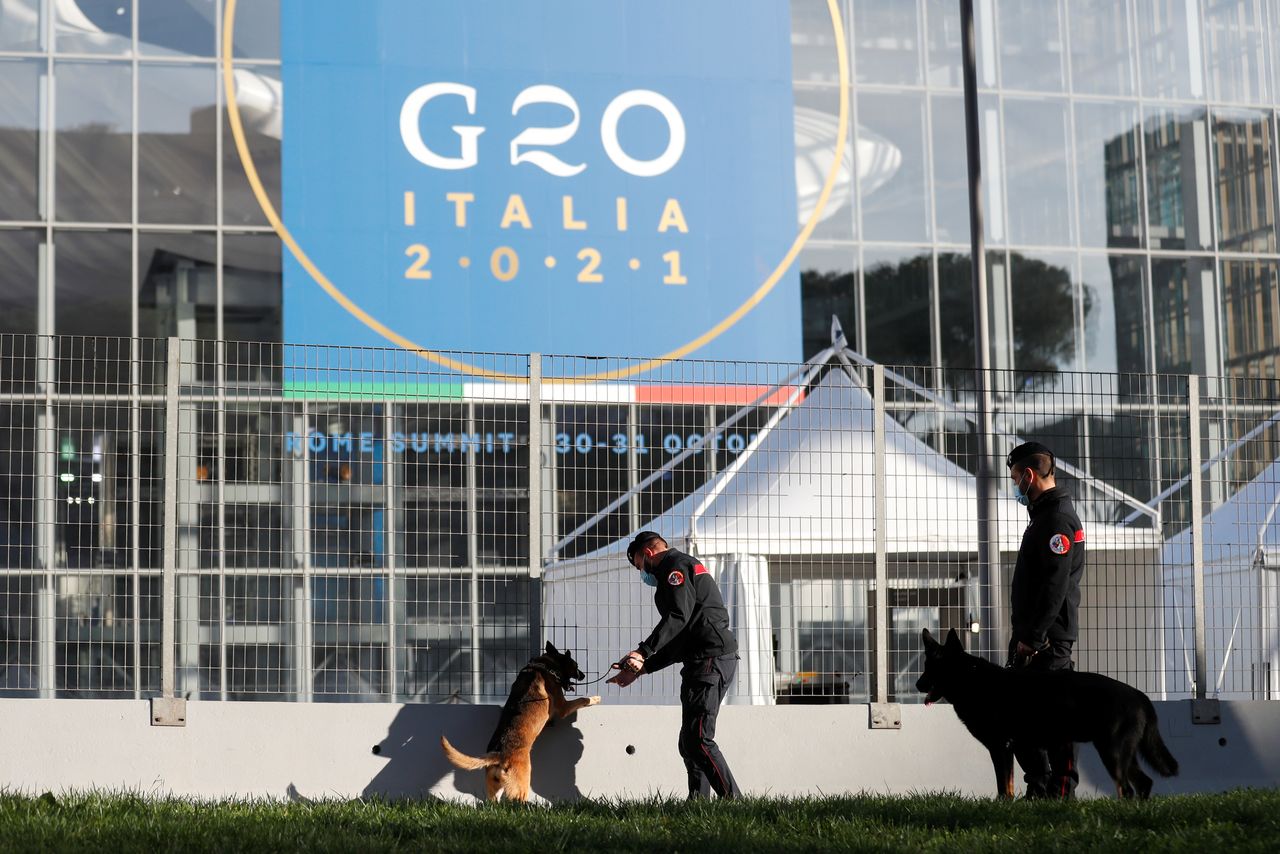 Carabinieri police officers inspect the area with explosive detection dogs outside the convention centre "La Nuvola" (the cloud) ahead of the G20 summit in Rome, Italy, October 27, 2021. REUTERS/Yara Nardi

ROME (Reuters) - If high-stakes climate talks are to succeed next month in Glasgow, the initial signs of progress may emerge this weekend when leaders of the world's 20 biggest economies hold their first face-to-face meeting in two years.

Big obstacles lie in the way. The G20 is divided over questions such as phasing out coal and limiting global warming to 1.5 degrees Celsius (2.7 degrees Fahrenheit), giving diplomats little time to forge an accord before the Oct. 30-31 gathering.

Many of the leaders coming to Rome, including U.S. President Joe Biden, will fly immediately afterwards to Scotland for the United Nation's climate summit, known as COP26, which is seen as vital to tackling the threat of rising temperatures.

The COP26 involves almost 200 countries, but the G20 bloc, which includes Brazil, China, India, Germany and the United States, is the dominant force, accounting for more than 80% of the world's gross domestic product, 60% of its population and an estimated 80% of global greenhouse gas emissions.

"The time has passed for diplomatic niceties. If governments, especially G20 governments, do not stand up and lead this effort, we are headed for terrible human suffering," U.N. Secretary-General Antonio Guterres said last week.

In a setback to hopes of a robust G20 response, Biden's expectations of heading to Europe with a strong domestic deal on climate policy have diminished greatly because of political divisions over a broader spending package.

To the further disappointment of hosts Italy, the leaders of China, Japan, Mexico, Russia and Saudi Arabia have declined to attend the meeting, which will be held in a Rome suburb called EUR that was built by the fascist dictator Benito Mussolini.

Chinese President Xi Jinping and Russian President Vladimir Putin are reported to have pulled out because of concerns over the COVID-19 pandemic, but are expected to follow the discussions via a video link, diplomats said.

COVID-19 meant last year's G20 summit was a virtual event and continued fallout from the health emergency will feature prominently in the Rome talks, with Italy keen for major economies to coordinate the global recovery.

Fears over rising energy prices and stretched supply chains are likely to be addressed, as is the need for reform of the World Trade Organization (WTO).

G20 leaders will also sign off on a minimum global tax rate of 15% for big companies - a deal that was finalised earlier this month and that Italy has hailed as a major achievement of its year-long G20 presidency.

Italy has likewise said it is proud of a summit it organised in May that resulted in pledges from rich nations for hundreds of millions of COVID-19 vaccine doses for poorer regions, as well as a deal to channel International Monetary Fund emergency reserves to impoverished countries.

"Given the international situation, I think Italy can be satisfied with its G20 presidency. But hopefully further agreements can be reached over decarbonisation," said Antonio Villafranca, director of studies at the Italian Institute of International Policy Studies.

One area where Italian Prime Minister Mario Draghi aims to find consensus is a pledge to slash methane emissions by 30% by 2030 against 2020 levels - another element in the battle to curb greenhouse gases responsible for warming the Earth's atmosphere.

One of the trickiest negotiations will concern the need for rich nations to honour a 2009 pledge to provide poor ones with $100 billion per year to help them adapt to climate change.

In 2015 they agreed to extend this goal through to 2025 but the target, which some poor countries and climate activists now say is insufficient, has yet to be met.

The talks will take place in a futurist convention centre called 'The Cloud', with social events scheduled at some of the historic sites that dot central Rome, including a gala dinner in the president's palace.

The interior ministry has said between 5,000 and 6,000 police along with some 500 soldiers will be deployed to ensure security. Airspace will be closed over Rome and border controls will be enhanced to try to keep away potential troublemakers.

(Additional reporting by Angelo Amante and Gavin Jones in Rome and Michel Rose in Paris; editing by Barbara Lewis)