OKINAWA, Japan (Reuters) - Aiko Shimajiri fist-bumps supporters as she walks into a rally at a bullring in Okinawa's gritty Uruma city, the former minister in Japan's ruling party relishing the prospect of pulling off an upset victory in this weekend's vote.

Nationwide, the Liberal Democratic Party (LDP) is expected to lose seats in Sunday's lower house election due largely to voter dissatisfaction over the handling of the coronavirus pandemic.

But in the far southern prefecture of Okinawa - long a bastion of the pacifist opposition - the LDP's harder line on China and proactive security policy is helping it win over younger voters.

"If we don't have U.S. forces and our Self-Defense Forces (SDF) here, we can be attacked by China," said electrician Takuji Ikemiya, 41, at the rally. "We think differently from the older generation that has experienced the war and its aftermath."

Elderly voters are mostly sticking with left-wing parties, mindful of Okinawa's past as one of the bloodiest battlegrounds of World War Two, and opposing the U.S. military bases which house 50,000 people and take up a fifth of the main island.

The LDP has called for an unprecedented doubling in defence spending, largely in response to China's aggressive military posture on Taiwan, only 110km (68 miles) from the westernmost isle in this strategic archipelago fringing the East China Sea.

The LDP will not reverse its projected losses on this issue alone, experts say. But the fact that the party is on the cusp of making gains in Okinawa shows how concerns over China are helping the LDP win a longer game with the electorate.

The LDP's internal polling data show support for one of its Okinawa candidates at around 40% among people in their 30s and 40s. It stands at only 25% among those over 60, with close to half of that cohort backing a communist party opponent.

The opposition's "All Okinawa" movement, which has dominated local politics with its anti-base message, has been losing steam: A candidate backed by the ruling bloc won mayoral race in Uruma in April, and a powerful corporate sponsor switched sides to the LDP last month.

"All Okinawa" holds three out of four Okinawa districts but polls show the LDP, which holds the remaining seat, could snatch one more if Shimajiri converts a tight battle into a win.

"My parents support 'All Okinawa' because of their anti-base position, but I grew up with American bases and I take them for granted," said Kazuhisa Higa, 33, a construction company worker who will vote LDP.

"Abe lowered the voting age to 18 knowing that the agenda he was promoting would attract younger voters. Conservative agenda, defence was one of those, but also nationalism," said Sato, adding that Abe's economic programme was also popular.

Under Abe, Japan introduced laws allowing its troops to fight on foreign soil, ended a ban on military exports and reinterpreted the country's war-renouncing constitution to allow missile strikes on enemy territory.

A poll in the Mainichi daily last week showed the trend holding up across Japan, with 40% of those under 40 backing the LDP, compared to 10% for the largest opposition party.

To be sure, top of mind for voters is economic recovery from the pandemic. The view that the LDP is more capable and can get more done in Okinawa - one of the country's poorest regions - is also a major driver of youth support for the party.

"It is not like young people are forgetting their identity as Okinawans. But if there're no jobs here, then you won't be able to live here anyway, right?" said Hiroto Higa, 34, who was elected as a local LDP lawmaker in July.

But 500 km (310 miles) southwest of Okinawa island, on the small island of Yonaguni, from where Taiwanese mountains are visible a few times a year, the China threat is more palpable.

"At that time, Taiwanese fishing boats entered the fishing grounds near Yonaguni to avoid pressure from China," he said.

Two decades later, to Beijing's chagrin, Japan opened a radar station on the island to gather intelligence on China.

The result is a place of surreal contrasts, where wild horses roam and huge military radar towers loom in the background. Some 1,700 villagers live on the island, including 240 SDF members and their families.

Some in the island chain complain that bases make them a potential target. Others, like Mariko Nishiyama, 36, who runs a horse ranch on Yonaguni, said she used to be afraid of China but, "now that we have the SDF base, I feel safer in case of a crisis." 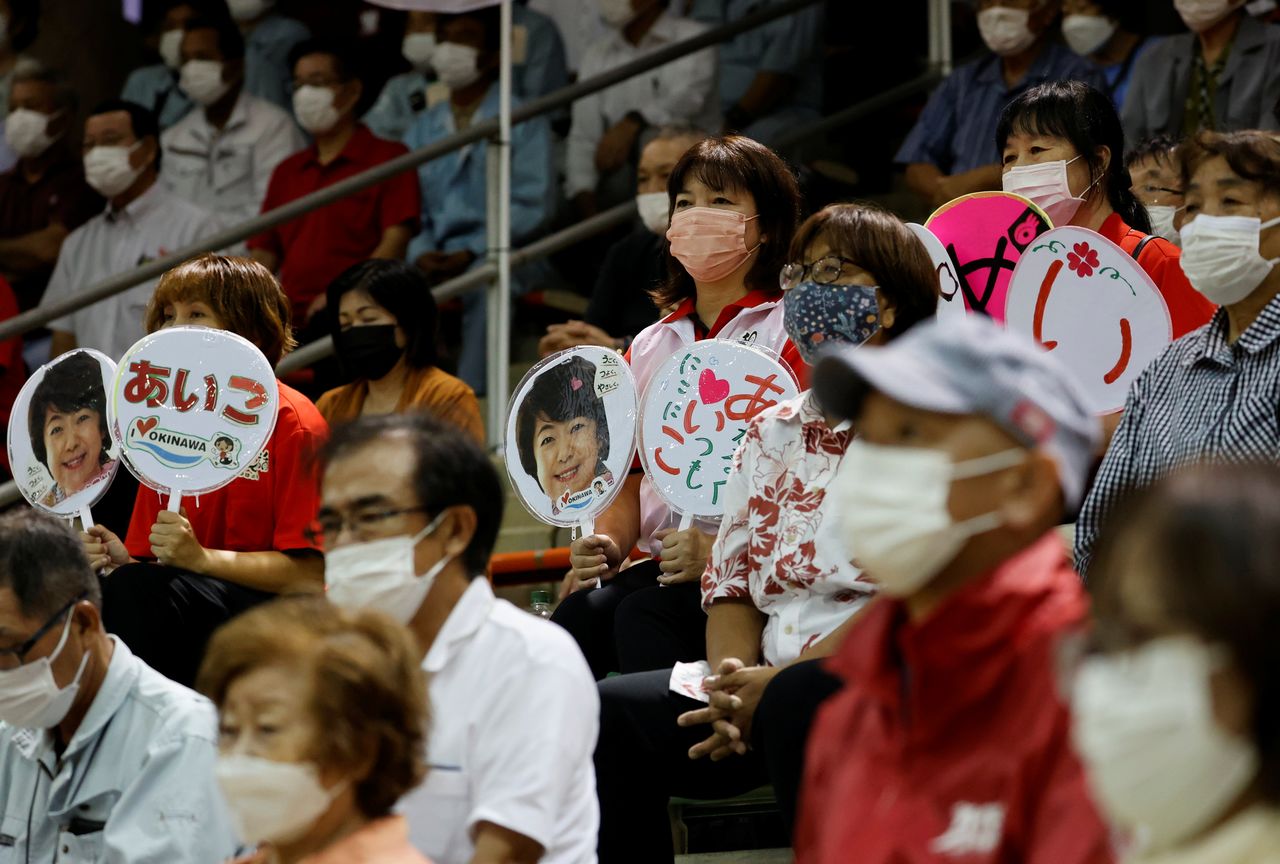 Supporters of Aiko Shimajiri, a candidate for the upcoming lower house electiom from the ruling coalition Liberal Democratic Party and its junior partner Komeito party, hold a rally at a traditional bullfighting ring in Uruma on the southern island of Okinawa, Okinawa prefecture, Japan, October 25, 2021. REUTERS/Issei Kato 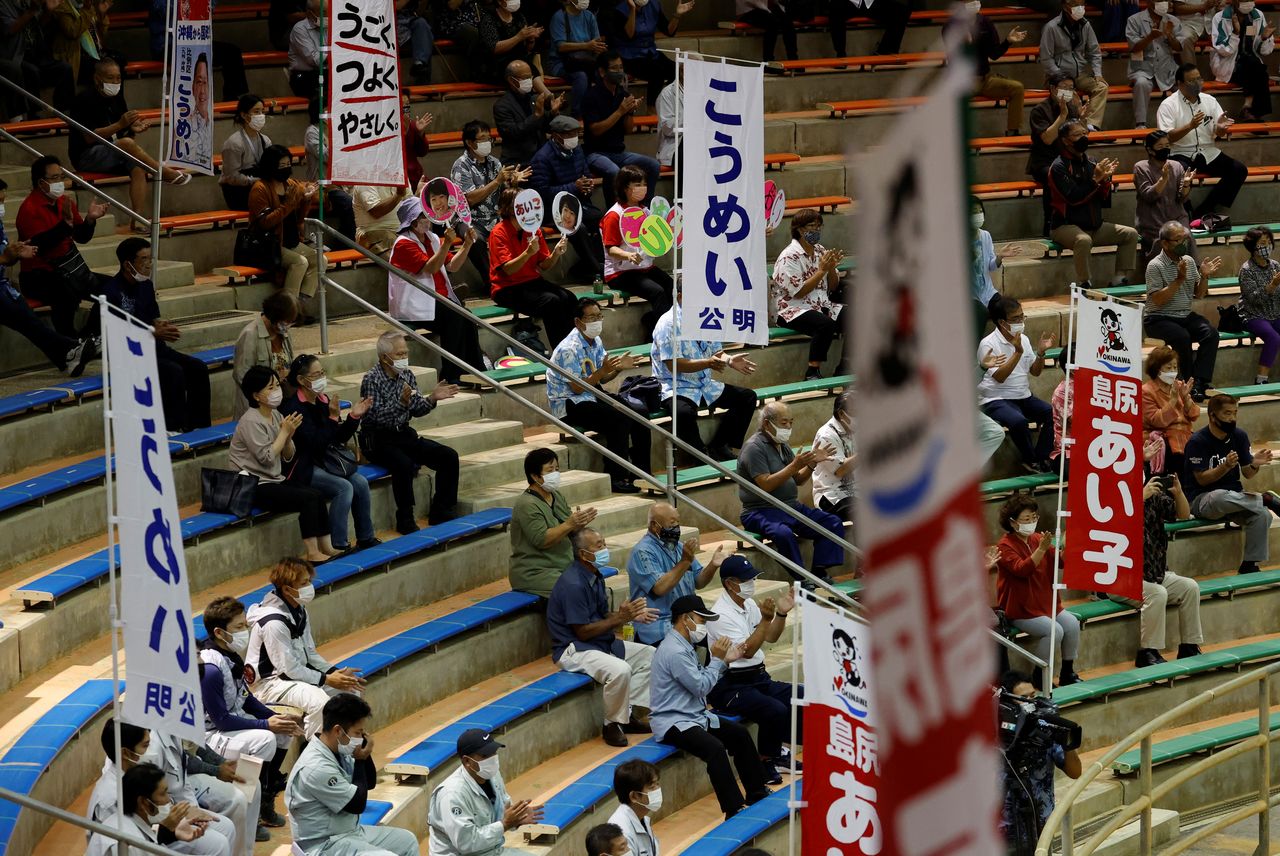 Supporters of Aiko Shimajiri, a candidate for the upcoming lower house election from the ruling coalition Liberal Democratic Party and its junior partner Komeito party, hold a rally at a traditional bullfighting ring in Uruma on the southern island of Okinawa, Okinawa prefecture, Japan, October 25, 2021. REUTERS/Issei Kato 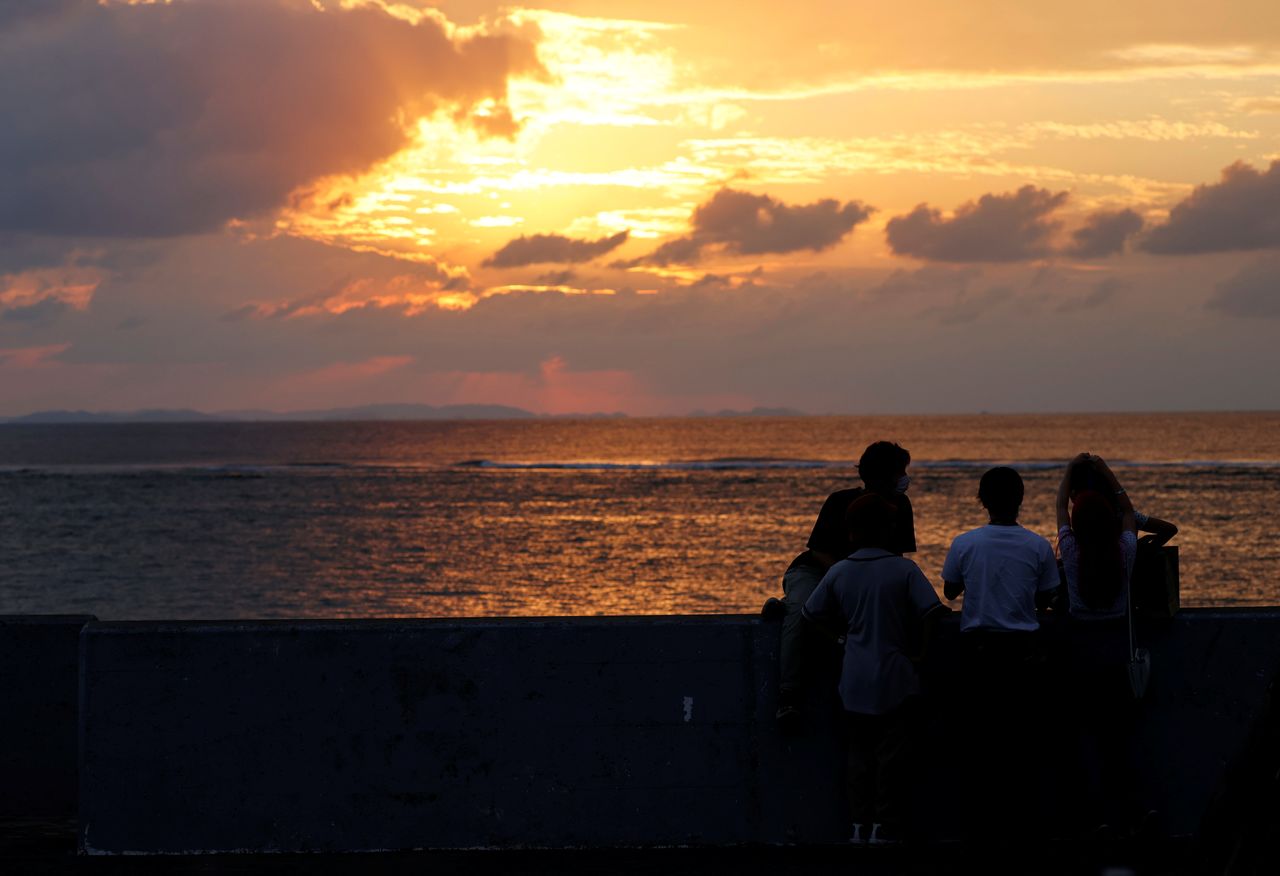 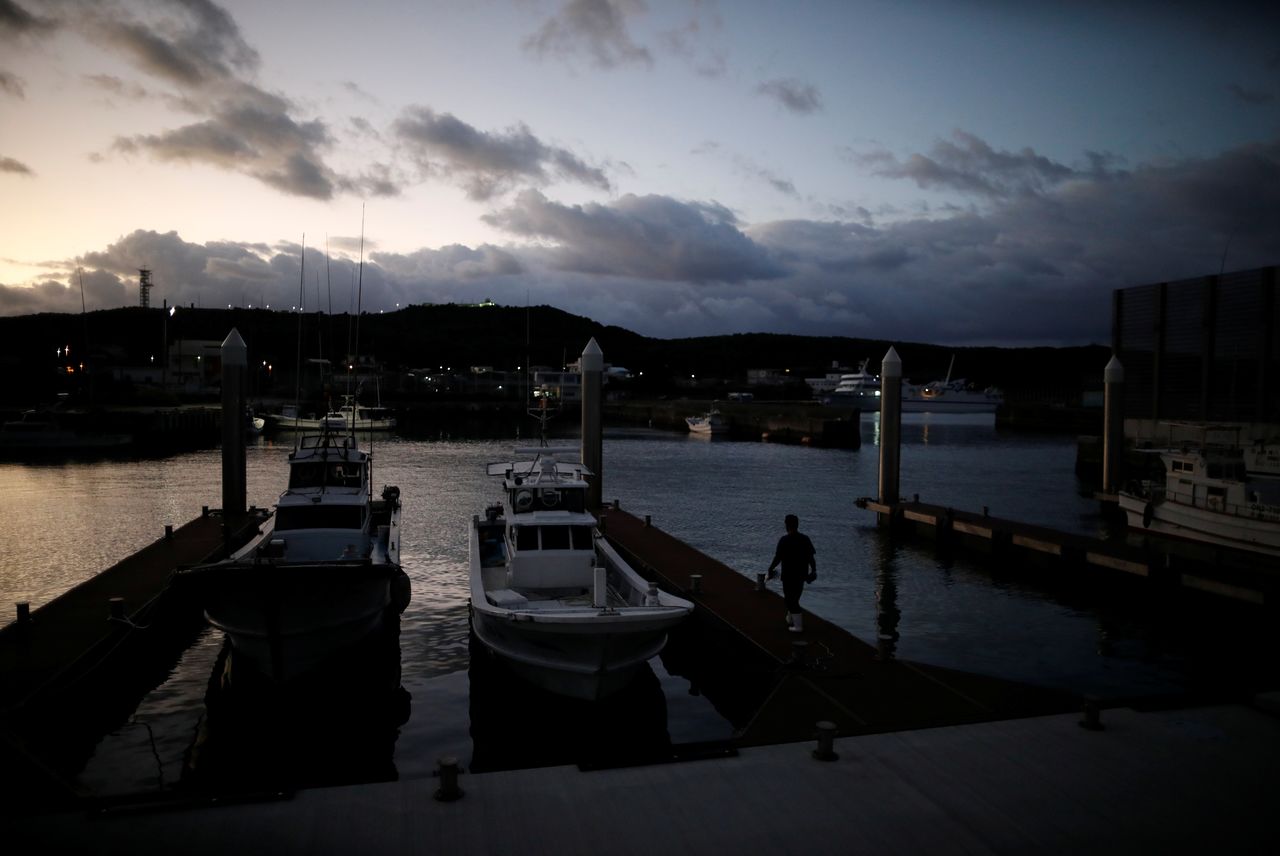 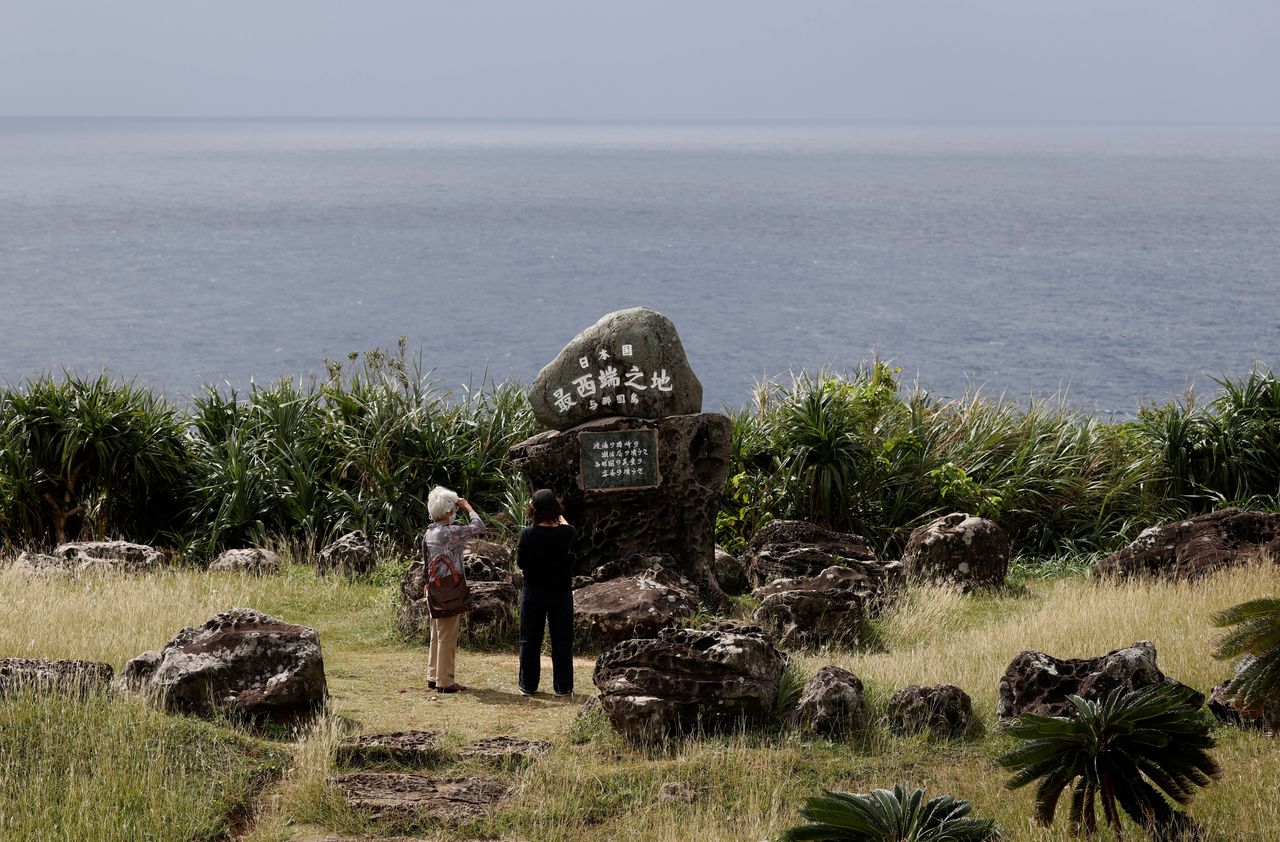 People enjoy the view of the East China Sea next to the monument of Japan's westernmost point, from where Taiwanese mountains are visible a few times a year, on Japan's westernmost inhabited Yonaguni Island in Yonaguni, Okinawa prefecture, October 26, 2021. REUTERS/Issei Kato