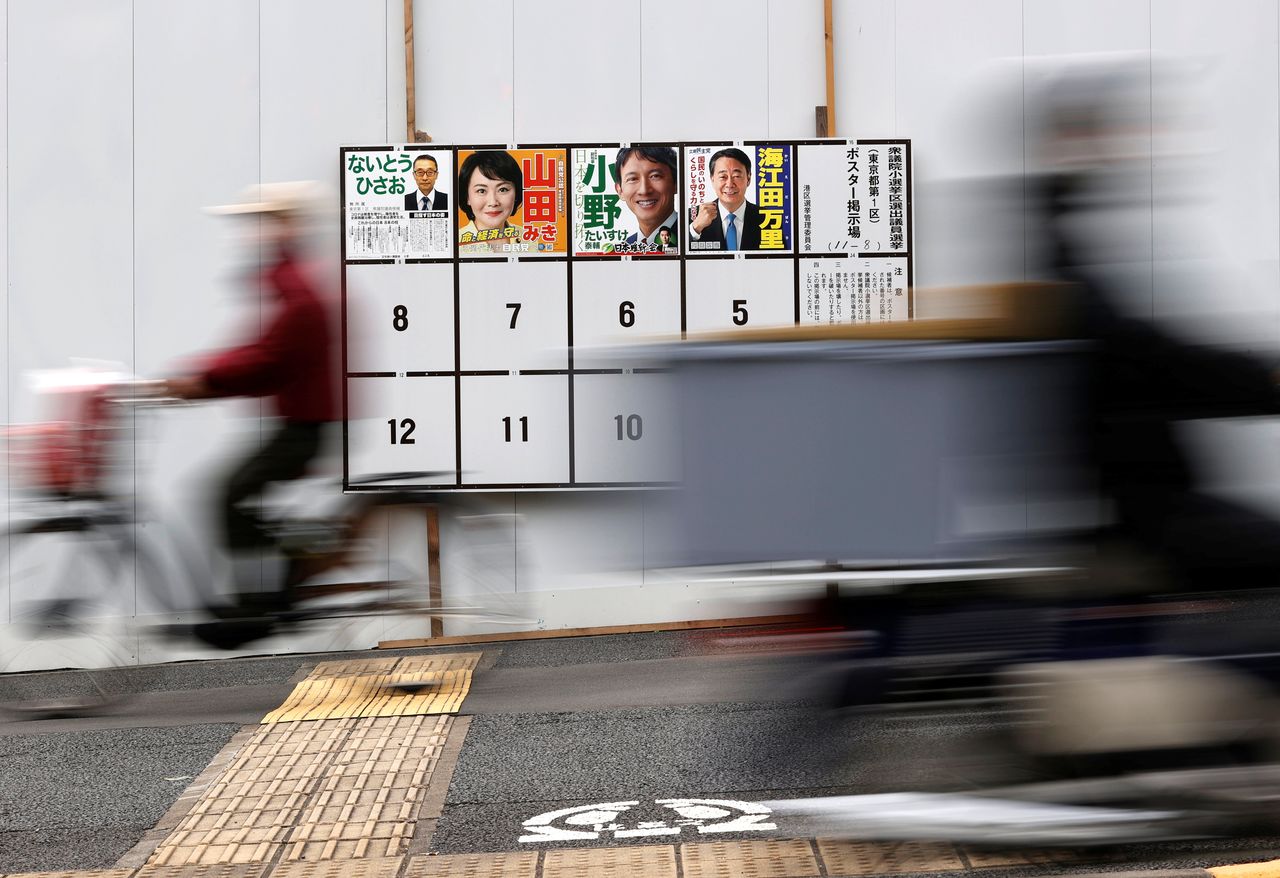 Posters of candidates for a lower house election are displayed outside a polling station, amid the coronavirus disease (COVID-19) pandemic, in Tokyo, Japan October 31, 2021. REUTERS/Issei Kato

TOKYO (Reuters) -Japanese Prime Minister Fumio Kishida's ruling coalition was projected to stay in power in Sunday's election, but his party suffered steep losses, potentially weakening him just weeks into the job of leading the world's no.3 economy.

"The thing I'm most surprised by is how well Ishin (the Japan Innovation Party) has done. I think (acting party leader, Osaka Governor Hirofumi) Yoshimura developed a major national profile, which I think has also served as a tailwind for the party overall."

Even if Kishida "has a majority, there are going to be a lot of spooked politicians who barely won in the LDP who are going to be paying more attention to calls for redistribution."

"The numbers that I'm very interested in seeing are voter turnout for those under 40. I think the starkest divide that we saw, including in the party leader debates, was on social-cultural values and the environment. I think Kishida is going to have to think very hard about whether or not he wants to corral members of his own party to support or at least not openly oppose legislation to move Japan towards a more progressive direction."

"The coalition will keep the majority but not the two-thirds majority required for a constitutional change."

"I don't expect a major policy change, but I think one of the big winners in this election is the Japan Innovation Party. They are really sweeping the Osaka region. They've emerged as an important conservative bloc."

"Whether the Japan Innovation party joins (the coalition) or not will make a difference not so much to foreign policy but domestic economic policy. They are going to block Kishida's new capitalism idea of narrowing the rich-poor income gap.

"I believe chances are next to nothing that some moves will come forth within the party to take down Kishida. I expect he will remain in his post."

"Things could become a little tricky for Kishida if he leads the party to defeat in the upper house election next year. But I don't think party leadership will come under criticism because of the results of this election."

"There's a lot of interest especially in Asia over whether Japan would try to revise their constitution, but that won't be possible with the ruling coalition from the looks of it. But the Japan Innovation Party looks like they've captured a lot of seats, so we may be seeing some sort of constitution-related coalition, even if the possibility of constitutional revision remains low."

“If the projections are correct, then Kishida should be able to continue to govern, or start to govern, but maybe there’ll be a bit of a question mark over his leadership in view of the Upper House election next year. So I guess he’ll still try to have to show that he’s got something that’s different from (his predecessor Yoshihide) Suga.”

“But maybe he’ll emphasise economic security given that it’s being promoted by (Liberal Democratic Party Secretary-General Akira) Amari. (If Amari loses), it would be quite dramatic. I don’t recall any LDP secretary general losing his seat, at least in the single-member district. It would be a huge blow for the LDP. That would be quite embarrassing."

"The coalition itself won't fall apart and the government will remain, but even given this, the number of seats they have is definitely decreasing and this could make managing parliament difficult."

"If the LDP manages to hang on to a sole majority, though, there probably won't be that much trouble. But next year, whether Kishida will be able to really hold things together in the run-up to the upper house election will depend on his policies showing results."